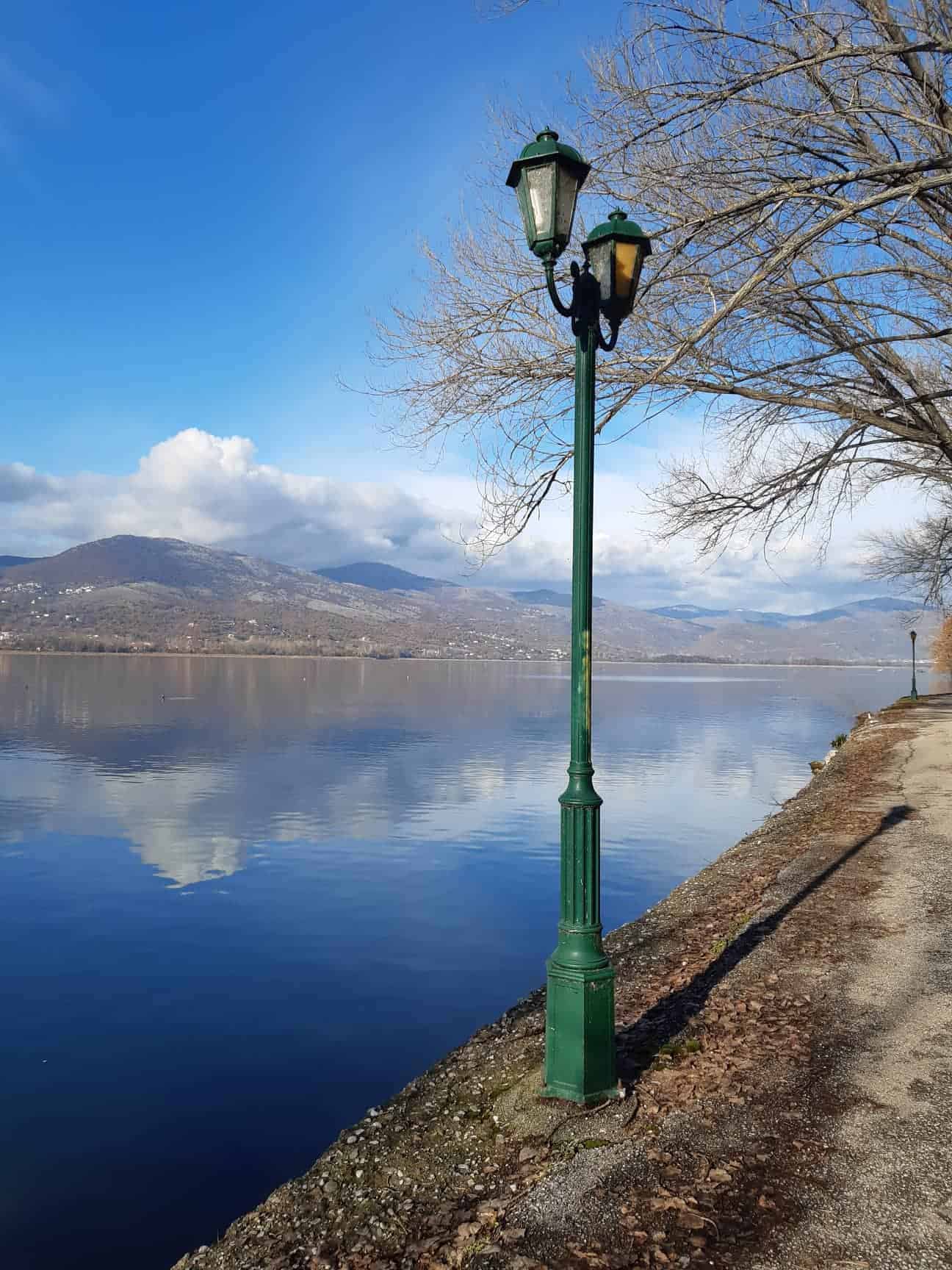 Greece in October is not the most usual time of year for a Mediterranean escape, however, it may well be a great time to travel! Contrary to popular belief, Greece IS a wonderful year-round travel destination.

Most people consider Greece to be a summer getaway destination. They flock to the islands of the Cyclades and the Ioanian in their droves between June and September. After that, they think that they have to wait until the following year if they want to enjoy a big fat Greek adventure. Not true!

Why Visit Greece in October?

Admittedly, Greece in October does not boast the same scorchingly hot temperatures that you will see in Southern Europe in July and August – but do you really want those anyway?

Sometimes it gets as hot as 40 degrees Celsius in the height of summer and even just walking 10 minutes to a coffee shop is unbearable and transforms you into a big sweaty mess. Some of the perks of coming to beautiful Greece in October are detailed below.

Greece in October:
The Weather

The weather in Greece in October is usually still very warm and pleasant. You can usually expect to see daytime temperatures that linger around the mid to high twenties in terms of degrees celsius. It gets a little colder in the evenings, so you need to pack a sweater or a cardigan for the nighttime.

The weather starts to get a little cooler towards the end of the month, and sometimes it can be a little temperamental with rain and windy days, but it definitely isn’t cold. The weather is still warm enough to go to the beach here and there, but you should try and plan an itinerary that does not focus on spending all of your time by the sea. That way, you will not be stuck with nothing to do if it does happen to rain or become windy one day.

October is the perfect time to head to Greece if you want to explore archaeological sites, cosmopolitan cities, charming villages, and hiking trails. A handful of destinations to consider in Greece in October are detailed below.

You can schedule your Athens itinerary for any time of year and still have a wonderful time. October is a great time to visit the Greek capital as the cooler temperatures make walking around the historical sites of the Acropolis, the Agora, Plaka, and Mount Lycabettus much more bearable.

On a cool or rainy day in Athens, there is still plenty to see and do – a plethora of interesting museums, quirky neighbourhoods that each have their own personalities, and homely tavernas where you can sample the local cuisine.

Athens may look like a crowded metropolis but in reality, the coast is just 30 minutes away from here. On a sunny day, head to the Athenian Riviera, and relax on the beaches in the coastal towns of Glyfada, Voula, and Vouliagmeni.

Boats between mainland Greece and the Cyclades still run on a very frequent schedule in October. This is a good time to travel to the popular getaway destinations of Santorini and Mykonos as the weather is still warm, and yet the cost of travelling can be as much as 50% lower than during the peak summer months.

The Cyclades provide the quintessential Greek getaway – traditional villages filled with blue and white Cycladic houses, pristine sandy beaches with secluded coves and azure waters, and sunset panoramas that look like something straight off a postcard.

If you are visiting Greece in October, you can also consider travelling to some of the lesser-known islands in the Cyclades – maybe Amorgos, with its quaint villages, dramatic Hozoviotissa Monastery, old churches, and Venetian monuments, or perhaps Folegandros for its rugged nature, hiking, and camping.

October is a great time to visit the islands of the Saronic Gulf. The islands of Hydra, Poros, Aegina, Agistri and Spetses can be reached within just an hour’s journey from Piraeus port.

The wonderful thing about travelling to the Saronic Gulf islands in October is that an itinerary here is not dependent on hot weather. Yes, the islands have wonderful beaches where you can relax by the sea, but their highlights are quaint fishing villages, scenic hiking trails, and beautiful nature. Even if the weather is a little temperamental during your trip, you will still have plenty to do.

Thessaloniki is Greece’s second-largest city and a wonderful year-round travel destination. Since Thessaloniki is situated in the northern part of the country, the weather is usually a little cooler than in Athens, Southern Greece, and the Cyclades.

Thessaloniki boasts many interesting neighbourhoods and historical attractions (the White Tower, the Rotunda, old Ottoman baths) that make it well-deserved for a weekend break. The city is also a great place to base yourself for a wider exploration of Northern Greece. You can opt to stay here and then take day trips out from Thessaloniki to Kerkini Lake, Meteora, Kastoria, Mount Olympus and Pella.

The leafy student city of Ioannina sits in the northwestern corner of mainland Greece. Ioannina is not a popular tourist destination which is a shame as it has plenty to offer. Buses from Thessaloniki to Ioannina, and internal flights from Athens have made Ioannina a little more accessible in recent years.

Ioannina sits on the banks of the beautiful Pamvotida Lake. This was a very important trade city during the Ottoman era and as you wander around the narrow streets, you will stumble across dozens of well-preserved Ottoman houses and mosques.

Perhaps the most unique attraction in Ioannina is the unnamed, inhabited island in the centre of Pamvotida lake. The island is home to a small village, and half a dozen eerily abandoned grand monasteries.

Most people fall in love with Greece for its islands, but the country is so much more than that. If you want traditional villages, country escapes, and mountain scenery, you’ve got that in Greece too. Karpenisi is a town in the mountains of central Greece that is often referred to as being the “Switzerland of Greece” on account of its jaw dropping scenery.

Karpenisi is a popular winter getaway destination, and locals will often travel here over the Christmas period to go skiing. However, October and November are also great times to travel! Temperatures are cooler up in the mountains, so be sure to pack light layers.

The Karpenisi area boasts excellent hiking and cycle trails. If you rent a car, you can visit the adorable mountain villages of Megalo Chorio, Gavros, and Prousos. The Proussos Monastery is one of the most important pilgrimage sites in Greece and is perched dramatically on a cliff edge just 25km away from Karpenisi.

In Greek mythology, Mount Olympus was the residence of the Gods. From up here, the 12 Olympian Gods watched over the citizens of the world and made decisions about their fate.

While the myths are debatable, Olympus is the highest mountain peak in Greece and one of the most rewarding hikes in the country. October is essentially the last month of the year that you can visit Olympus, as snow covers the higher parts of the mountain towards the end of the month.

One of the easiest ways to reach Olympus is to do so on an excursion from Thessaloniki. You should allocate around seven hours for the complete round hike. It is possible to do partial hikes if you don’t feel up to conquering the peak. There are several natural hot springs on the way up which offer a nice place to stop and relax. You can also tie in your visit to Olympus with an exploration of the ancient cities of Dion and Litochoro.

Once upon a time, Nafplio was the capital of Greece. It has been invaded and conquered several times, and each of these cultures have left their mark on the city. In Nafplio, you can see Venetian fortresses sitting beside Ottoman mosques and grand neoclassical mansions.

Nafplio has been “in vogue” as a romantic getaway destination for Greek couples over the last few years. You can reach the city in just over 90 minutes from Athens. Nafplio also makes a good jumping off point for exploring the wider Peloponnese region.

The word Meteora translates to meaning “suspended in the air” – a fitting name for a complex of several monasteries perched dramatically on the top of rugged rock formations.

This area was originally inhabited by monks in the 11th century. They dwelled in the rocks and caves of the area. Over the centuries that followed, an array of dramatic monasteries were built. Today, only six functioning monasteries remain, but Meteora provides some of the most magical scenery in Greece. You can combine a trip to Meteora with an exploration of the nearby village of Kastraki, and the cave of Theopetra.

Zagorohoria and the Vikos Gorge

The Vikos Gorge is one of Greece’s best and most famous hiking trails. The route leads you just north-west of Ioannina, through the villages of Zagorohoria.

This trail is not all that well known among international tourists, but it does get very crowded during the summer months and guesthouses at the villages can be jam packed. Travelling to Greece in October ensures a more peaceful trail experience.

It is possible to plan a route through the Vikos Gorge where you essentially “hop” from one village to another, staying in charming homestays, and sampling the local cuisine in homely tavernas. You can also consider taking a bus to the Vlach town of Metsovo.

October is a good time to plan your trip to Crete. Like the majority of Greece, prices fall and crowds subside once the summer season is over.

The warm weather at this time of year means that there will indeed be time to enjoy the Cretan beaches, but this season is best for focusing on cultural, historical, and outdoor attractions.

Consider taking a boat across to Spinalonga – an island that once housed a leper colony. Crete is best explored by car, but if you need to depend on public transport, consider dividing your time between Heraklion and Chania, and then taking day trips to places like Knossos and Agios Nikolaos. Hiking lovers can also consider conquering Crete’s Samaria Gorge if travelling to Greece in October.

The 28th October of each year sees Greece celebrate “Oxi Day”, known as “the day of no”. This is the anniversary of the day that the Greeks said no to Mussolini and the Italians when they asked Greece to surrender to Nazi Germany.

If your travel dates coincide with Oxi Day, you may note that some smaller businesses are closed in celebration of this public holiday. A parade is held in Athens’ Syntagma square and soldiers march through the streets wearing military uniforms and Evzones attire as planes fly overhead. Many businesses and stores across the country display Greek flags outside their window on this day.

Have any further questions about travelling to Greece in October, or planning a Greece itinerary in general? Please don’t hesitate to get in touch! I have lived in Athens for the last three years and I’m always happy to assist with any questions. Safe travels! Geia sou! Melissa xo