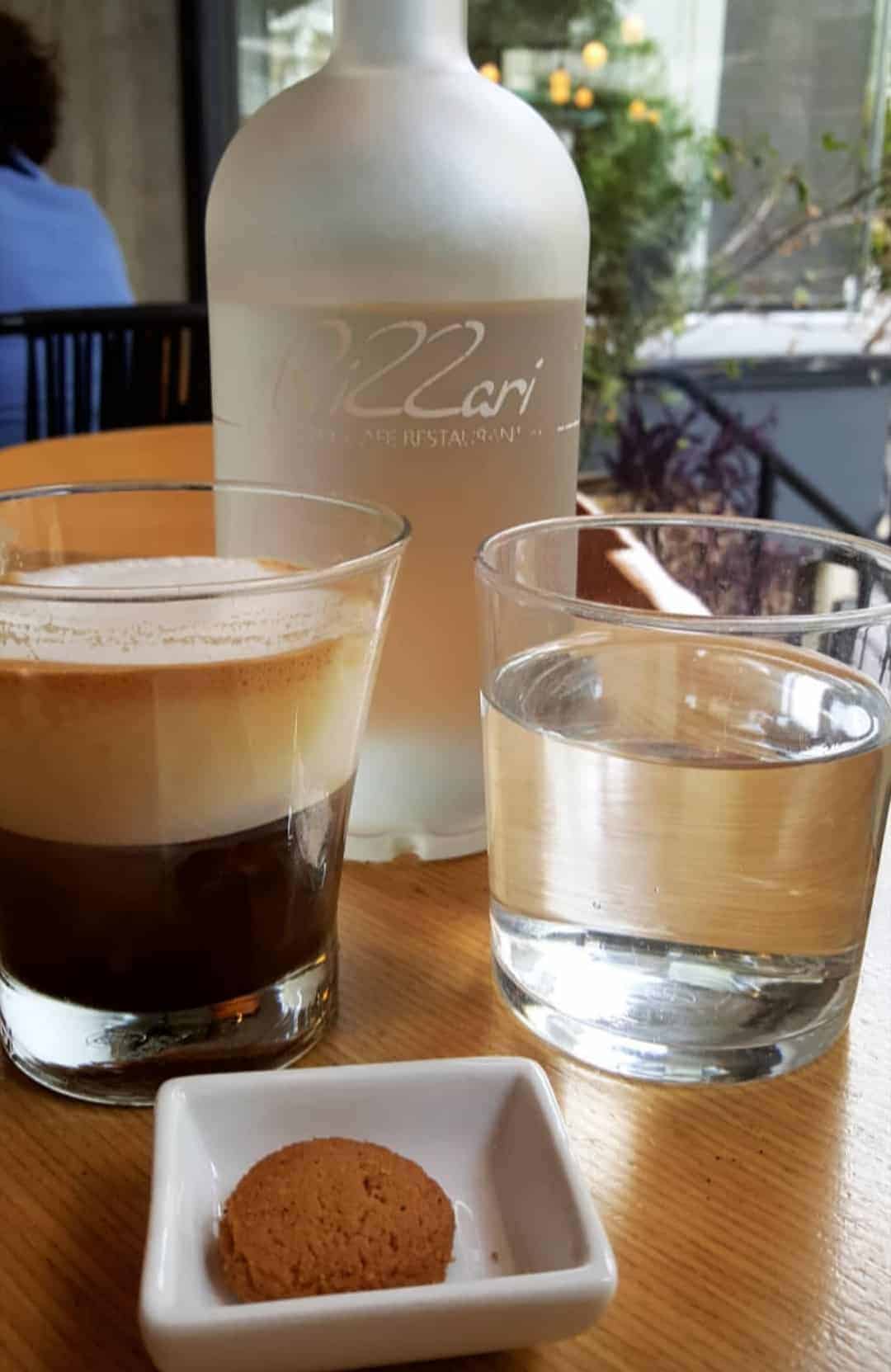 Greek coffee culture is huge. In fact, Greeks have such an affection for coffee that you could say that coffee drinking is the national sport of Greece.

Virtually every other store in Athens is a coffee shop. Whatever time of day you find yourself wandering through the streets of Kolonaki, Monastiraki, or Pagrati, you will find that these places are so crowded that locals are spilling out onto the streets.

It is estimated that the average Greek person consumes 5kg of coffee per year. This is a fact that makes Greece one of the biggest coffee-drinking countries in the world!

The history of coffee stems back hundreds of years. Going for coffee is considered a “very Greek” thing to do, despite the fact that coffee originated thousands of miles away from here.

It was the Ottoman Empire that first brought coffee into Greece. The beverage was crafted and enjoyed across Arabia before the Persians traded it across the world.

The first Ottoman coffee shop was opened in Constantinople (Istanbul) in 1425. As the Ottoman Empire expanded into Greece, they bought their coffee with them.

Going out for coffee is an almost daily occurrence for Greeks. The coffee culture in Greece is much different from that in nearby Italy. While Italians will stand in a coffee shop and drink their espressos quickly, Greeks will spend hours cradling a cup of coffee and sitting outside with their friends. The coffee-drinking culture here is much more laidback and relaxed.

In Greece, it is acceptable to sit for hours with your coffee just soaking in the ambiance. Nobody ever hurries you along.

Greek coffee culture has come a long way in the last few decades. An overview of the various types of coffee that can be found in Greece today, and how best to enjoy and prepare them, as detailed below.

Ellinikos Kafes is the original form of Greek coffee. This is essentially the same thing as Turkish/Arabic coffee. This should come as no surprise considering the coffee’s Ottoman roots.

That said, you can still find several more traditional ‘kafeneio’ places across the country. Most of the patrons are old-timers, who sit outside and sip strong Ellinikos Kafes with their friends over shared stories and games of backgammon.

How Ellinikos Kafes is served

Traditional Greek coffee (Ellinikos Kafes) is strong, bitter, and served in a small espresso-style cup. It is brewed in a traditional copper briki and warmed over hot coals. Sugar is added before boiling, at your request.

When you order traditional Greek coffee, it is usually served with a side of loukoumi. This is the indulgent, sweet Greek version of Turkish Delight.

Loukoumi comes in a variety of different flavours, although rose is the most common type that is served with Greek coffee. The beverage leaves a thick black residue at the bottom of the cup which cannot be consumed.

Read your fortune in your Greek Coffee

Local legend has it that it’s possible to read your fortune from the dregs at the bottom of your coffee cup. There is a name for this art: kafemandeia.

To do this, turn the coffee cup clockwise three times and swirl the dregs around in the cup. Then, place the cup upside down on the plate for a moment.

The mess and splatters that are left in the cup are then open for interpretation. You can ask a local to help you with this if you want to try it. Alternatively, try your hand at it yourself and find charts online about what shapes and symbols to look out for.

If you want to enjoy Greek coffee at home, it is easy to do so. Many Greeks prepare their morning coffees the traditional way.

Loumidis Papagalos (ΛΟΥΜΙΔΗΣ ΠΑΠΑΓΑΛΟΣ) is widely regarded as being the best mainstream Greek coffee brand, although there are others available.

It is sold in little bags and can be distinguished by its bright red or bright green packaging along with an image of a bird. You will also be able to find it through online stores and platforms such as Amazon.

All major Greek supermarkets sell Greek coffee. If you want to buy a special copper briki to make the coffee in, browse through the little stores selling them in Thissio, Plaka, Athens, and the Athens Central Market (Varvakios Agora).

Freddo is the most common type of coffee you will encounter in Greece today. To create Freddo coffee, one or two shots of espresso are added to a cup with ice.

A simple espresso with ice is a “Freddo espresso”. However, foamy milk or cream can be added to create a “freddo cappuccino”. If you want sugar, you should tell the server when you order the coffee as they will add that in before blending.

Freddo coffee in Greece is worth a try, even if you consider yourself someone who doesn’t typically like cold coffee. Whether it’s the type of coffee used, the blending process, or some secret ingredient (love?), this type of coffee tastes unlike anything found elsewhere.

Greek frappe is the ‘original’ Greek cold coffee. It was actually discovered by accident and there is an interesting story behind its creation.

In 1957, there was a trade show being held in Thessaloniki, Northern Greece. A local man called Dimitris Vakondios wanted to prepare himself a cup of coffee during his break at the exhibition.

After noting that there was no hot water available, made a cold coffee by mixing coffee granules with cold water in a shaker. From there, Frappe was born!

The Rise and Fall of Greek Frappe

From the seventies, the Greek frappe quickly took over as the national beverage of Greece. Today, it is less commonly found at coffee shops and bakeries because most establishments now have espresso machines and people prefer Freddo coffee.

You can still find the frappe at some smaller, independent places and tavernas. You can also make it easily by yourself at home.

It is very easy to make Greek frappe at home. You will find pots of Nescafe frappe in every supermarket and convenience store across Greece, and some internationally. Frappe is still a popular summer drink that Greeks will prepare at home on days that they don’t go out for coffee.

The process for making Greek frappe is detailed below in 7 easy steps:

You can of course find all of your typical hot coffees in Greece, just like you can in other European coffee shops. Americanos, cappuccinos, lattes, and espressos are available at most modern bars and coffee shops. The quality is usually very good.

It is worth noting that flavoured coffees, i.e. caramel and hazelnut blends, or other hot coffee shop drinks like chai lattes are not really a ‘thing’ in Greece yet. There are a few Starbucks branches in Athens and larger cities that serve things like caramel macchiatos, but it’s arguably better to try out the local, independent places.

There are many hip, Bohemian coffee bars in Greece – especially in Athens and Thessaloniki. Cold brew coffee has emerged on the Greek coffee scene in recent years. It does not have the same cult following as Freddo, but it can be found in most modern coffee shops.

The coffee is made by steeping ground coffee beans in water for up to 12 hours. The concentrated mixture left behind is then mixed with water or cold milk.

How to Order Your Greek Coffee

You will find that most people in Greece speak a very good level of English, especially in Athens neighborhoods and in tourist areas. You will have no problem ordering your coffee in English.

However, if you want to impress the locals by ordering your coffee in Greek, instructions on how to do that are given below.

Ena and Mia are the two Greek words for “one”. Each is used to precede different words but when ordering coffee, you use “ena” ( ένα).

“Parakalo” (Παρακαλώ) in Greek means “please”. So, to order a coffee in Greek, you will say “ena”, then the name of the coffee, and then “parakalo”.

You can also change the number depending on the number of coffees that you want to buy. Dyo (δυο) means two, and tria (τρία) means three.

When you order Freddo, frappe, and Ellinikos kafes in Greece, you should specify how much sugar you want when you order. The different quantities are mentioned below. I usually take my coffee medium, as sweet coffee is often far too sweet.

How Much Does Greek Coffee Cost?

The price of Greek coffee varies substantially depending on the type of coffee that you order, and where you order it. A lot of trendy coffee shops have opened around Athens in recent years. Some of them charge prices that are not so dissimilar to being in London!

However, if you go and sit in a chic coffee place in the Athens Koukaki district, or by the sea in upscale Vouliagmeni, it is not unusual to pay €3.50 for a Freddo espresso and €4.20 for a Freddo cappuccino. Cappuccinos, lattes, and other hot coffees are usually more expensive.

Expect to pay between €3-4.50 for one, depending on the place. Some artisanal stores also let you choose the type of beans that you want – e.g. Mexican Chiapas coffee, Colombian beans, etc.

Where to Enjoy Greek Coffee

Greece is a coffee lover’s paradise and coffee stores are on practically every street corner. Most bars operate as coffee shops during the day and serve everything from Freddo to hot cappuccinos.

Arguably the best coffee is to be found at the hip, independent coffee stores. Coffee places in Greece will usually give you free water to accompany your coffee, and often free snacks – a bowl of nuts, a croissant, a slice of cake, etc.

Coffee Island, Coffee lab, and Mikel are three of the main “branch” coffee takeout stores in Greece. Most bakeries also usually have a coffee machine. If you create an account on the Greek website E-Food (our version of Uber Eats), you can even have Greek coffees delivered to your place!

Do you have any further questions about Greek coffee culture or planning a trip to Greece? I’ve been living in Greece since 2017 and I have gotten to know the country pretty well during that time.

Safe travels and have a wonderful time in Greece! Geia sou! Melissa xo