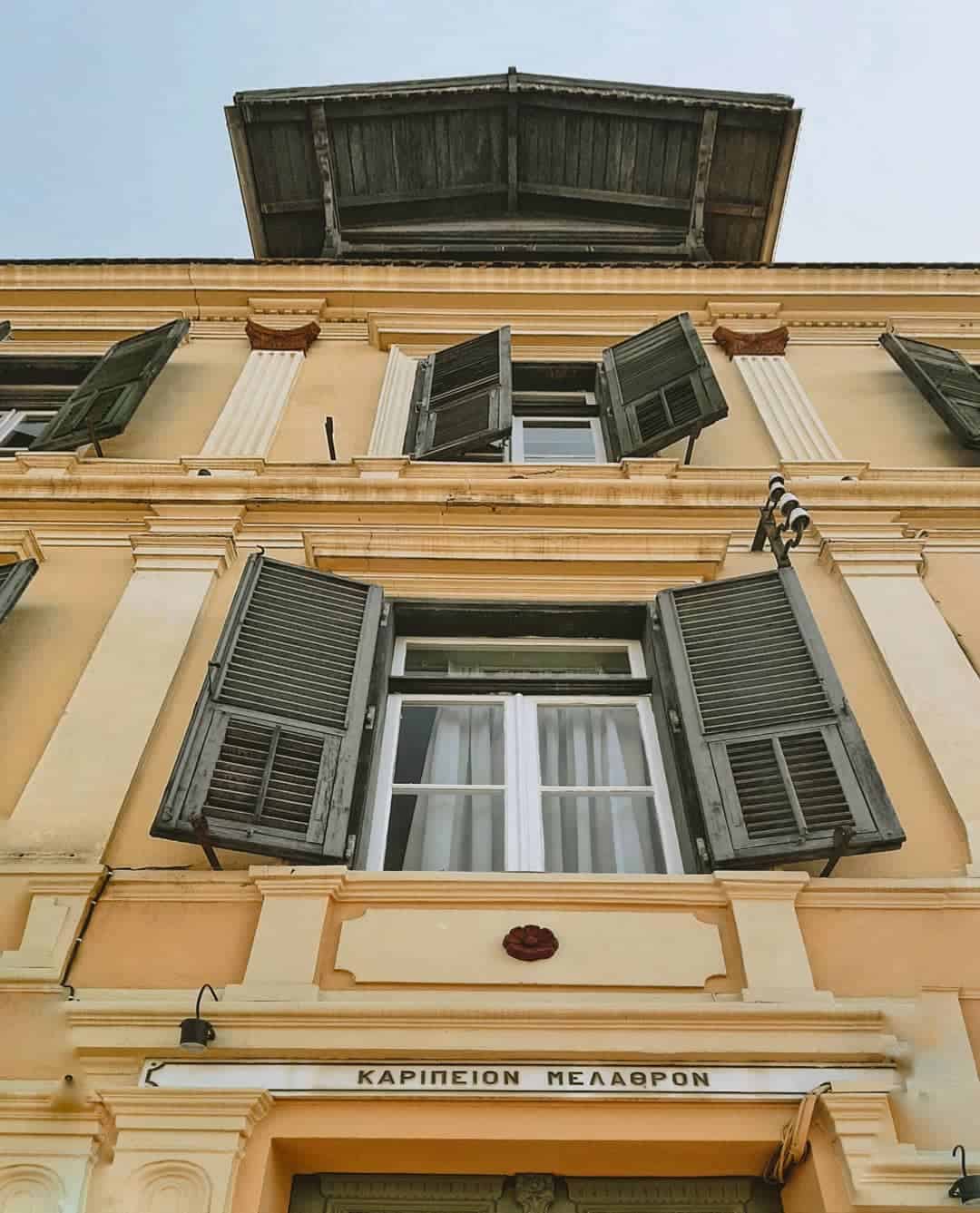 Ano Poli is one of the oldest districts in Thessaloniki, and one of the most unique and charming to boot. The neighbourhood sits high in the hills above the city.

It is characterised by narrow cobbled passageways, pastel-coloured Ottoman houses, and grand Byzantine structures. Ano Poli, along with Ladadika is one of the only Thessaloniki districts that survived the tragic 1917 fire that destroyed much of the city.

In some ways, this area feels frozen in time. It possesses a certain je ne sais quoi that is difficult to find elsewhere in Greece’s second city.

Things to See and Do in Ano Poli

Ano Poli (Άνω Πόλη) means “upper town” in Greek. Part of the charm of exploring Ano Poli is to be found in simply taking the time to get lost among its labyrinth-like network of winding streets.

The most nondescript-looking streets and promenades will surprise you. They lead you toward eclectic coffee shops and cosy eateries beloved by locals and visitors alike.

Ano Poli is largely residential. This is a great place to enjoy a lazy afternoon of wandering with no set plan.

Watch on as yiayias negotiate over the price of produce at local markets, as hip young Thessalonikians meet for coffee and as local school children play out in the street. You will also find some interesting and thought-provoking street art that adorns some of the walls and store facades. This is Ano Poli.

Thessaloniki in itself is not an overly touristic place. So, it goes without saying that little Ano Poli escapes a lot of people’s radars.

The area boasts more than initially meets the eye. Not only is it a picturesque district, it is also home to several UNESCO world heritage sites, and some significantly important Ottomon-era historic sites.

People often believe that Thessaloniki has nowhere near the historical sights of Athens or other Greek cities. That isn’t true. They just don’t know about Ano Poli.

Search for Traces of Ano Poli´s Ottoman Past

The colourful Ottoman houses that cascade down hilly streets are your first clue that Ano Poli was a prominent neighbourhood during the days of Turkish rule in Greece. Some of them appear somewhat deteriorating and ramshackle in appearance these days, yet charming nonetheless.

Those aside, there are several ruins and historic sites of significance. Here you will find the mysterious toubes of Sufi mystics, the sun-bleached ruins of once shimmering Islamic minarets, and the birthplaces of notable Turks.

Mustafa Kemal Atatürk was the founder of modern Turkey and is beloved in Turkey today. He was born in Thessaloniki in 1881 and in Ano Poli, you can stop by his former home.

As you search for traces of Ano Poli’s Ottoman past, you should also look out for the Alaca Imaret between Sofokleous and Aghiou Nikolaou at 91-93 Kassandrou, and The Tourbe of Musa Baba at Terpsithea Square. The latter is a 16th-century mausoleum and the final resting place of a Sufi Mystic (Musa Baba).

The Vlatadon Monastery (Monastery of Vlatades) sits in the beating heart of Ano Poli. This is one of the most important Byzantine monasteries in Northern Greece.

The exact date on which the monastery was founded is unknown. However, it is believed to have opened its doors between 1351 and 1371 AD.

Tranquil gardens encompass the monastery. Inside, you can view a collection of relics and manuscripts from both the Ottoman and Byzantine eras. This includes religious icons of historic importance, codecs and Turkish firmans, and imperial golden seals.

The views from the monastery are second to none. You can enjoy excellent panoramas over the city from up here. On a clear day, you can see all the way out to Mount Olympus in the distance.

Tread Along the Old City Walls

A relative concentration of Greece´s UNESCO-protected sites can be found in Ano Poli. The walls that encompass this old area, and separate it from modern Thessaloniki, are UNESCO protected too. If you want to follow a specific route while you explore the neighbourhood, you can consider treading along the old city walls.

Admire the frescoes within beautiful churches

Most Greek neighbourhoods boast stunning Orthodox churches on every corner, in the same way, you will find Starbucks coffee shops on every block in the west. Ano Poli, Thessaloniki is no different.

Every Orthodox church is charming in its own way. It is free to duck inside each church and admire the frescoes within.

Notably, you should make time to visit the Church of Agios Nikolaos Orfanos. The structure dates back to the year 1310 and can be found nestled between the streets of Herodotus and Apostle Paul.

Although the exterior of the church is simple, Agios Nikolaos Orfanos is home to some of the most beautiful and best-preserved frescoes in Thessaloniki. It is believed that they were hand-painted by a Serbian monk.

Agios Nikolaos was the patron saint of orphans and widows. Equally worth your while is the 5th-century Church of Osios David. This historic structure is another of Ano Poli’s UNESCO-protected sites.

Thessaloniki’s Heptapyrgion Fortress looms over the city, watching over it protectively. This is essentially Thessaloniki’s answer to the Acropolis and the fortress has stood here for over 1,000 years.

During this period, it was converted into a prison. Throughout the centuries, Heptapyrgion was the site of many tortures. It continued to operate as a prison until 1989.

Today, the fortress is open to tourists as a historical site. Exploring the fortress, its various cells, and passageways is one of the eeriest travel experiences you can have in Northern Greece.

Hike Through the Nearby Sheikh Sou Forest

Opportunities for hiking in Greece are plentiful. Fortunately, you don’t have to venture too far out of Thessaloniki´s city limits to get back to nature.

The Sheikh Sou forest sits adjacent to Ano Poli, and Thessaloniki’s city limits. There are several scenic hiking trails that twist and turn through its woodlands. There is something here for hikers of all ages and abilities.

Thessaloniki is quite the gourmand. It is often referred to as Greece’s foodie capital on account of the plethora of excellent restaurants that can be found here, each serving delicacies from across the country.

Want to try traditional delicacies from Epirus or Lesvos but your travel schedule does not permit you the time to do so? You will be able to sample all of these cuisines from natives in Thessaloniki.

This foodie theme is continued in Ano Poli. Some of the best-loved Thessaloniki restaurants can be found tucked away down its unsuspecting side streets.

Taverna Igglis (Irodotou 32) is a Thessaloniki institution. This family-owned spot has been delighting locals for more than a century.

The menu, like the atmosphere of Ano Poli itself, is an array of traditional Greek dishes with a contemporary, modern twist. From the outside, this place looks like nothing to write home about.

However, it serves some of the most mouthwatering dishes in town. Dishes served change depending on seasonality. Slow-cooked pork shank cooked in thyme, mushrooms with Cretan cheese, and cured pork. Not to mention a diverse selection of ouzos, tsipouros, and Greek alcohols to wash things down with.

Toixo Toixo (Stergiou Polidorou 1) is an Ano Poli restaurant that stands out above the crowd. This charming little place is a hole in a wall situated in the most historic part of town.

The name translates to mean ¨behind the wall¨. This is a fitting title considering the eatery´s ¨hidden¨ location right behind the district´s old Byzantine walls.

Toixo Toixo is unapologetically Greek. The little wooden tables are painted blue and white, and traditional memorabilia and antiques from across the country adorn the walls.

All of your favourite taverna classics can be ordered here. Better yet, the menu offers specialty dishes from specific regions of Greece. Many of these are otherwise hard to find if you don´t travel to that particular area.

One dish to consider ordering if you are looking for something a little different is the hilopites metsovou. This is special handmade pasta from the Vlach village of Metsovo.

Do you have any additional questions about exploring quaint Ano Poli or Thessaloniki in general? Please don’t hesitate to reach out.

If you are visiting Greece for the first time, you may also enjoy this guide on planning a trip to Greece.

I have been living in Greece since 2017. I will always try to get back to you as soon as I can.