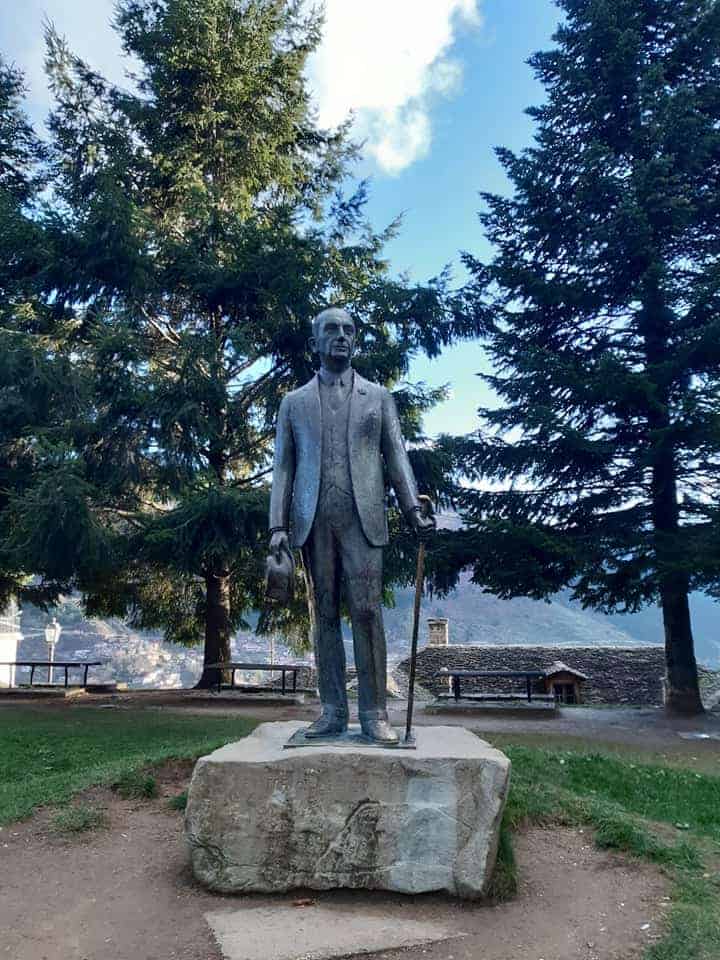 Northern Greece is often overlooked by most travellers to Greece. This is a shame, as it is an area that possesses some of the most unique scenery, cuisine, and nature that the country has to offer. Altogether wilder and more rugged than the rest of the country, this region is Greece’s best-kept secret.

Where to Travel in Northern Greece

Whether you are interested in hiking and nature, or history and culture, Northern Greece has a little something for everyone. While it’s often Athenian sites such as the Acropolis, and the sun-bleached ruins of old Plaka that capture the attention of history buffs in Greece, the northern region has plenty of history too. After all, this district was the birthplace of Alexander the Great, and the civilisation of ancient Macedonia.

Set high in the Pindus mountains is the quaint little stone village of Metsovo. Renowned for its red-roofed houses and its namesake Metsovone cheese, Metsovo is a popular winter getaway destination for Greeks.

The culture of Metsovo is distinctly different from that which you can find elsewhere in Greece, as Metsovo is a Vlach settlement. Village residents speak the local dialect of Vlach and Aromanian, in addition to modern Greek.

Metsovo can be enjoyed on a day trip from nearby Ioannina, or you can opt to stay in one of the family-run guesthouses that overlook the snow-capped mountain peaks. Embark on one of the many hiking trails that twist and turn throughout the region and reveal centuries-old monasteries nestled in the woodland – such as the hidden monastery of Agios Nikolaos.

Visitors should be sure to sample the traditional dishes of Metsovo as they warm themselves by the fireplace of cosy tavernas. Try the paidakia (lamb chops), the loukaniko (sausages), or the smoked Metsovone cheese appetizer. You can also try local wines produced at the village’s Katogi Winery.

Ioannina (or Yannena in Greek) is the capital of the Epirus region of Greece. It borders the Pamvotida lake and is set against a dramatic backdrop of mountains. Ioannina may well be the most scenically beautiful city in mainland Greece.

Today, Ioannina is a young university town. During the days of the Ottoman Empire, the city was an important cultural, commercial, and intellectual hub. Despite the fact that Ioannina is a regional capital, it possesses a very “small town” vibe.

You could easily while away a few days in Ioannina. Enjoy a scenic morning stroll along the lake, before taking a boat out to “The Island” – a nameless, inhabited island that sits in the centre of Pamvotida Lake and was once home to the notorious ruler Ali Pasha. Explore abandoned monasteries on “The Island” and enjoy traversing the ruined Ottoman mosques, libraries, and hammams on the mainland.

Kastoria is another beautiful lake city in Northern Greece. It isn’t a tourist destination, and accommodation options in the area are limited. However, Kastoria is a rewarding travel experience for those who enjoy venturing off the beaten path.

The city sits on the banks of Lake Orestiada. In the mornings, you will find a couple of local fishermen sitting on the banks of the lake and if you’re lucky, you might see some pelicans, herons, or other rare birds that live here.

There is a pleasant walking trail that leads around the lake and into the nearby woodland. There are more than 60 abandoned Byzantine and Post Byzantine churches scattered throughout Kastoria, though they have fallen into ruin, nobody visits them, and the paintings have had their eyes scratched out during the Turkish occupation giving them something of a spooky ambiance.

Be sure to also visit the Dragon’s Lair if you find yourself in Kastoria. (Spilia tou drakou). This cave boasts impressive formations of stalagmites and stalactites. It was only discovered a few decades ago, and locals created a story about a dragon that once lived in the cave (hence the name!)

Thessaloniki is Greece’s second-largest city. Situated by the waters of the Thermaïkos Gulf, Thessaloniki’s laid back atmosphere provides a stark contrast to the chaos of Athens. Stroll along the waterfront promenade that runs to the White Tower, and people watch as you sip freddo espresso in one of the local coffee shops overlooking the sea.

Numerous cultural influences have left their mark on the city. Today, colourful Ottoman, Byzantine, and modern structures sit side by side.

Like Athens, Thessaloniki is comprised of several different neighbourhoods each of which have their own personalities – Ladadika is the historical quarter, and today, its narrow cobbled streets have become the city’s entertainment district. Venture through the various passageways here and you will see dozens of lively tavernas and bouzouki bars scattered throughout the area.

Be sure to duck inside the many ancient Orthodox churches to admire their vibrantly coloured frescoes. Stop by the abandoned Heptapyrgion Fortress on the outskirts of town to obtain a macabre history lesson.

Greece is one of the most popular travel destinations in the world. Every year, more than 23 million people flock to Greece in order to enjoy a little slice of paradise. While places like Zakynthos, Rhodes, or the islands close to Athens are heaving with tourists during the summer months, there are some beautiful places that the Greeks keep for themselves: Halkidiki is one such place.

Halkidiki sits at the Northeastern edge of mainland Greece. It exists in the form of three prongs that jut out into the sea like Poseidon’s trident. Halkidiki offers everything that you could desire for a perfect summer getaway – idyllic beaches, translucent waters, and luxury resorts. However, Halkidiki is also much more than that.

Consider renting a boat and sailing out to the uninhabited island of Diaporos, visiting the traditional stone villages of Nikiti and Afytos, or following hiking trails that lead through dense woodlands, and fragrant lemon groves.

Lake Kerkini is an artificial lake that is situated in the Serres region of Northern Greece. Kerkini provides an example of a time where human intervention has actually had a positive impact on the environment.

Not only is the lake scenically beautiful, but it is also now one of Europe’s premier bird-watching destinations and is home to a plethora of rare birds, fish, and plants. Take a wooden boat across the lake so that you can catch a glimpse of majestic pelicans nesting on the waters. Kerkini is also home to the rare “dalmatian pelicans”.

If birdwatching isn’t your thing, you can still enjoy a trip to Kerkini. You can opt to stay overnight in one of the homely family guesthouses in the region or discover Kerkini on a day trip from Thessaloniki. Embark on a hiking trail through the nearby Belles mountains that separate Greece and Bulgaria, or take some time to explore the quaint villages of Central Macedonia (Vironia, Chrisochorafa, etc).

According to Greek mythology, Mount Olympus was home to all 12 of the Olympian Gods. Zeus, Athena, Poseidon, Artemis, and the others would sit here drinking nectar, and eating ambrosia as they discussed the fate of the mortals.

Today, Mount Olympus is one of the most famous hikes in the world, in addition to being the highest mountain in Greece. Though challenging, it is possible to hike to the mountain’s 2918m peak in 10 hours. There are alternative trails available for the less-seasoned hikers, and natural hot springs can be found along the ascent.

Mount Olympus can be climbed independently, but do your research in advance. Several hiking clubs based out of Thessaloniki regularly do excursions to Olympus, or you can explore the area on a guided tour.

The charming beach town of Parga sits on the west coast of Northern Greece. It is a summer travel destination that has seen a surge in popularity in recent years – particularly among Greeks.

In Parga, pastel-coloured houses and stores line the seafront, and the narrow cobbled streets and passageways are filled with upscale boutique stores and luxury hotels. For the best beaches in the area, head north to Sivota where translucent cerulean waters and hidden coves await.

The picturesque town of Trikala acts as a gateway to the mountains of Northern Greece. It is not a tourist destination, though many Greeks will tell you that Trikala is one of the most beautiful towns in all of Greece. The only time that most people will find themselves in Trikala, is when waiting for a connecting bus or train to take them to/from Meteora and Thessaloniki.

What Trikala lacks in sightseeing or archaeological sites, it more than makes up for in its beauty. River Lithaios runs through the town, and the path that runs beside it makes a pleasant place for a stroll. The waters here are abundant with trout, so if you pass by in the mornings, you will see dozens of local fishermen lined up along the banks.

Head to Manavika – an old trader district now filled with tavernas and the perfect place to sample local delicacies such as galotyri cheese and country sausages. From there, head to the historic district of Varousi to explore quaint old houses, and Ottoman ruins.

The Vikos Gorge is one of Greece’s premier hiking destinations. It sits in the Northern Pindus Mountains in the Epirus region of Greece, less than 20km north of Ioannina. You can hike the entire length of the gorge in 6 hours, however, the main draw of the region for most travellers is the quaint stone villages that act as waymarkers to break up the route.

Travellers can take the bus from Ioannina to Monodendri to commence their Pindus mountain adventure. From here, explore abandoned monasteries, hidden shrines, ornate stone bridges, and traditional villages frozen in time. The trip can be done independently and spaced out over as much as a week.

The ethereal landscapes that surround the Meteora monasteries are a highlight of most people’s Greece travel itineraries. Meteora translates to mean “suspended in the air” – a fitting description for the way that these centuries-old monasteries are perched precariously on top of cliffs.

There were once more than 20 monasteries that operated here. Unfortunately, time and the elements have destroyed several of the structures and so today, only six remain. Opt to spend the night in a nearby hotel that offers views of Meteora from your balcony – a perfect place to watch the sunrise. The monastery interiors are lavishly decorated with vibrantly coloured frescoes and ornate decor. Meteora is the second largest monastic community in Europe.

Have any questions about exploring the rugged wilderness of Northern Greece, or exploring Greece in general? I’ve lived here for almost three years now. I’m happy to assist with any questions and queries that you may have. Feel free to drop me a comment or question below and I’ll get back to you as soon as I can. Geia sou! xo