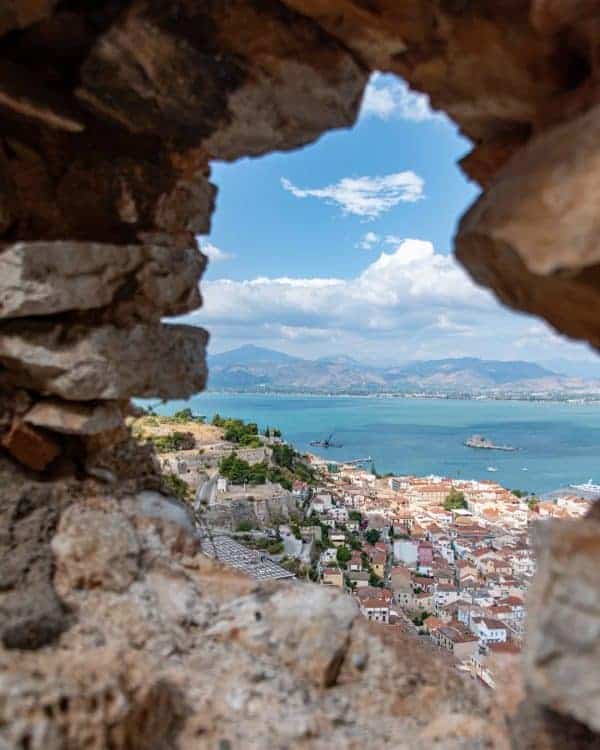 The best cities in Greece may sound like a subjective term. However, there is a little something for everyone in this beautiful Mediterranean country.

Athens, with its sun-bleached ruins, cobbled promenades, and bustling piazzas, is probably the first Greek city that springs to mind. It is true that most people travel to Greece for the islands, as opposed to for the cities. It’s a shame, as many of these underrated destinations are steeped in history and culture.

Best Cities on the Greek Mainland

Greece’s cities are a diverse bunch. From picturesque cities perched on mountain slopes to bustling megalopolises.

Leafy Ioannina (sometimes called “Yannena” in Greek”) is a beautiful student city in the Northeastern part of Greece and a popular student town. The city borders Pamvotida lake and is arguably the most scenically beautiful city in the country.

During the days of the Ottoman Empire, Ioannina was ruled by the notorious leader Ali Pasha. The city was considered a commercial and intellectual hub, and today it is rich in fascinating historical sites and Ottoman ruins.

You can easily spend 3-4 days in Ioannina enjoying the laidback Greek lifestyle amidst the breathtaking mountain scenery. Scale the crumbling walls of the old Byzantine castle, and visit the remains of the Fethiye and Aslan Pasha mosques, before boarding a wooden boat at Plateia Mavili and sailing out to the nameless, inhabited island at the centre of the lake.

Ioannina makes a good jumping-off point for exploring the wider Epirus region – including Zagorohoria, the Vikos Gorge, and quaint Metsovo.

Kastoria is a beautiful lake city that is perched on the banks of the Orestiada Lake, close to the Pindus Mountains. Its pastel-coloured houses and buildings cascade down the hilltops in a manner that resembles Italy’s idyllic Amalfi Coast.

While Kastoria is not a tourist destination, it’s a nice alternative place to spend a day or two if you are exploring the northern reaches of the country. There are more than 60 Byzantine churches in Kastoria, yet no tourists ever stop by to visit them. Nature lovers will adore the numerous hiking trails that twist and turn throughout the woodland surrounding the city.

Charming Nafplio sits at the heart of Greece’s rugged Peloponnese region. With its maze-style network of narrow cobbled streets and quaint piazzas, Nafplio feels like a journey back in time. In the 19th century, Nafplio was the capital of Greece. Today, it is a popular romantic getaway destination for Athenians who want to escape the hustle and bustle of city life.

The city has been invaded and conquered numerous times over the last few centuries. The Turks, the Arabs, and the Venetians who invaded have all left their mark on the city. Don’t miss the chance to visit the old Venetian castles here -notably Palamidi Castle, and Bourtzi fortress.

Grittier, punkier, and altogether more chaotic than other European capitals, Athens is Greece’s largest city. Here, you can admire some of the oldest and most important sites in human civilization, follow in the footsteps of Plato, and enjoy some of the best nightlife in the country.

Most visitors to Athens only stay a day or two. Besides the historical sites, Athens has plenty to offer.

The various neighbourhoods of the city are almost like little towns on their own. For instance, Koukaki oozes boho vibes with its eclectic coffee shops, international eateries, and vintage clothing stores. Meanwhile, Exarchia has become a symbol of anti-establishment, characterised by politically-motivated street art, rock bars, and vinyl record stores.

If you visit the ethereal Meteora monasteries, it is likely that you will either base yourself in or pass through Kalambaka. The beauty of Kalambaka is often overshadowed by its proximity to one of Greece’s most popular tourist attractions. However, the city itself is equally worthy of exploring.

Thessaloniki is Greece’s second-largest city. It sits in the Northeastern part of the country, overlooking the Thermaic Gulf. If you want to explore off-the-beaten-track wonders of Northern Greece, Thessaloniki is a good place to base yourself. From here you can do day trips to paradisiacal Halkidiki, and beautiful nature spots like Kerkini Lake and Mount Olympus.

Despite its size, Thessaloniki has a very small-town ambiance about it. The city feels worlds away from the traffic and chaos of Athens. The city’s neighbourhoods each have their own distinct personalities, and combine a mishmash of different architectural styles, reflecting the city’s mixed cultural heritage. Here, old Byzantine walls encompass colourful Ottoman houses and ancient Roman ruins.

The White Tower is Thessaloniki’s most famous structure. Built in the 15th century, it once served as a garrison, a prison, and an execution hall. Today, the seafront boulevard that it sits on is one of the most elegant spots in town. Lined with chic cocktail bars and coffee lounges, it’s a perfect place to enjoy a freddo cappuccino and revel in the views.

Most travellers simply consider Piraeus as the place that they need to get to in order to get a boat across to the islands of the Saronic and the Cyclades. Piraeus is linked to downtown Athens by Metro line 1, and people often forget that Piraeus is a separate city in itself.

While admittedly Piraeus may not be the most beautiful place to look at, it is something of a diamond in the rough. The elegant port areas of Mikrolimano and Marina Zeas are nice places to enjoy an evening tipple or two by the water, while the historic Kastella neighbourhood is a photographer’s dream filled with neoclassical mansions, colourful Ottoman houses, and sweeping views out to sea.

Volos is an attractive port city on the east coast of mainland Greece. Greeks speak affectionately of weekends spent in Volos, its tsipouro places, and its seaside walks. The city is also a great jumping-off point for island hopping in the Sporades.

In Greek mythology, the location where Volos stands today was once occupied by the city of Jason and the Argonauts! The archeological museum in Volos is one of the oldest in Greece. It houses an extensive collection of artifacts recovered from the region. For an off-the-beaten-path cultural adventure, head to nearby Mount Pelion and explore the charming traditional villages that sit on its slopes.

The picturesque city of Trikala is not a tourist destination. Foreign travellers only typically stop by here when making transport connections on their way to the Meteora monasteries. As far as a lot of Greeks are concerned though, Trikala is one of the most beautiful cities in the country.

River Lithiaios runs through the city. A pleasant way to while away an afternoon in Trikala is to wander along the riverside path, as it leads you through the city’s various districts. The water here is filled with trout. If you find yourself on the river banks in the mornings, you will find dozens of local fishermen prepping their hooks and trying their luck at making a catch.

The neighbourhood of Varousi is one of the oldest in Trikala. Here you will find Ottoman ruins and old neoclassical mansions that have been transformed into shops, restaurants, and businesses.

For dinner and nightlife, head to Manavika. This was once a trader district but today, its streets are lined with countless trendy restaurants and bars. Different regions of Greece have different Greek food specialties. In Trikala, you can sample delicious smoked country sausages and appetizers of galotyri cheese.

Nafpaktos is a large seaside town in Western Greece that overlooks the Corinthian Gulf. Most foreigners have never even heard of Nafpaktos, but a lot of Greeks venture here for their summer vacations.

Blue flag beaches extend along the Nafpaktos coastline, offering the perfect place for a little rest and relaxation. Gribovo and Psani beach are well serviced and offer sunbed rentals, toilet facilities, and plenty of nearby restaurants. For something a little more secluded, head to Monastiraki beach which sits just outside an idyllic fishing village.

Nafpaktos centre is one of the best-preserved and most beautiful seaside towns in Greece. It was once ruled by the Venetians who called it “Lepanto”. It was then occupied by the Ottoman Turks until the Greeks achieved their independence. The architecture is an interesting blend of colourful Ottoman houses and grand Venetian structures. Don’t miss the Venetian Castle. From here, you can enjoy breathtaking panoramas over the Corinthian Gulf.

Patras is a university city on the west coast of mainland Greece. Mention of Patras is almost synonymous with Apokries carnival – one of the most important festivals in Greece. During this festival, more than a million people take to the streets to celebrate and dance in the colourful parade.

Apokries aside, Patras is worth a visit if you find yourself in Western Greece. This is Greece’s third-largest city and it provides an interesting juxtaposition of the traditional and cultural, with the modern and contemporary.

The old town of Patras is a history buff’s dream. Some of the Roman ruins here are so well-preserved that you almost feel transported back to a time of chariots and swordfights. The Roman Odeon theatre was built during the rule of Emperor Augustus and dates back to the 1st Century AD. It has been lovingly restored and still hosts festivals and musical performances to this day.

Don’t miss the nearby Archeological Museum – home to more than 14 Roman mosaics (one of the largest collections in the country), and several partially-restored Roman houses. For the best views across the city, climb the stairs to the Castle of Patras.

The city of Kavala is a highlight of any Northern Greece itinerary. This port city is home to more than 50,000 residents and is divided into two sections: Nea Poli (new town) and Palia Poli (old town). Of the two sections, it is the Palia Poli that holds most of the charm.

Kavala’s old town is centered around a Castle (Kastro). Its narrow lanes twist and turn to reveal Ottoman buildings, traditional tavernas, neoclassical buildings, and historic monuments. The Ottoman rule over Greece has left its mark on the architecture of Kavala. You can explore the grounds of the Halil Bey Mosque, or stop for fresh pomegranate juice at the Imaret hotel – an old minaret that has been converted into a luxury hotel.

The new part of Kavala (Nea Poli) has a hip, youthful vibe. Its streets are filled with countless trendy fusion restaurants, coffee shops, and bars. If you want to swim in translucent waters and sink your toes into fine golden sands, head to the beaches of Ammolofi and Ammoglossa Keramotis.

Kalamata is the second-largest city in the Peloponnese. The scenery here is distinctive and unique – Kalamata sits against a beautiful backdrop of rolling green hills, forested mountains, and pristine beaches.

From the 13th century Castle of Isabeau, you can enjoy a magnificent birds-eye view of the city. This is particularly beautiful as the sun sets, and the skies are illuminated with hues of pink and orange.

At the foot of the castle, you will find Kalamata’s Palia Poli (old town). The winding cobbled streets here are home to more than half a dozen churches which date from the 13th to the 18th centuries. When the evening draws in, stop by Aristomenous street. This pedestrianised walkway is packed full of quirky coffee places, restaurants, bars, and taverns.

Have any questions about planning your vacation to Greece? Don’t hesitate to reach out to me in the comments below, or join my Greece Travel Facebook Group. I have lived here for three years now and I am happy to assist as best as I can. Geia sou! Melissa xo