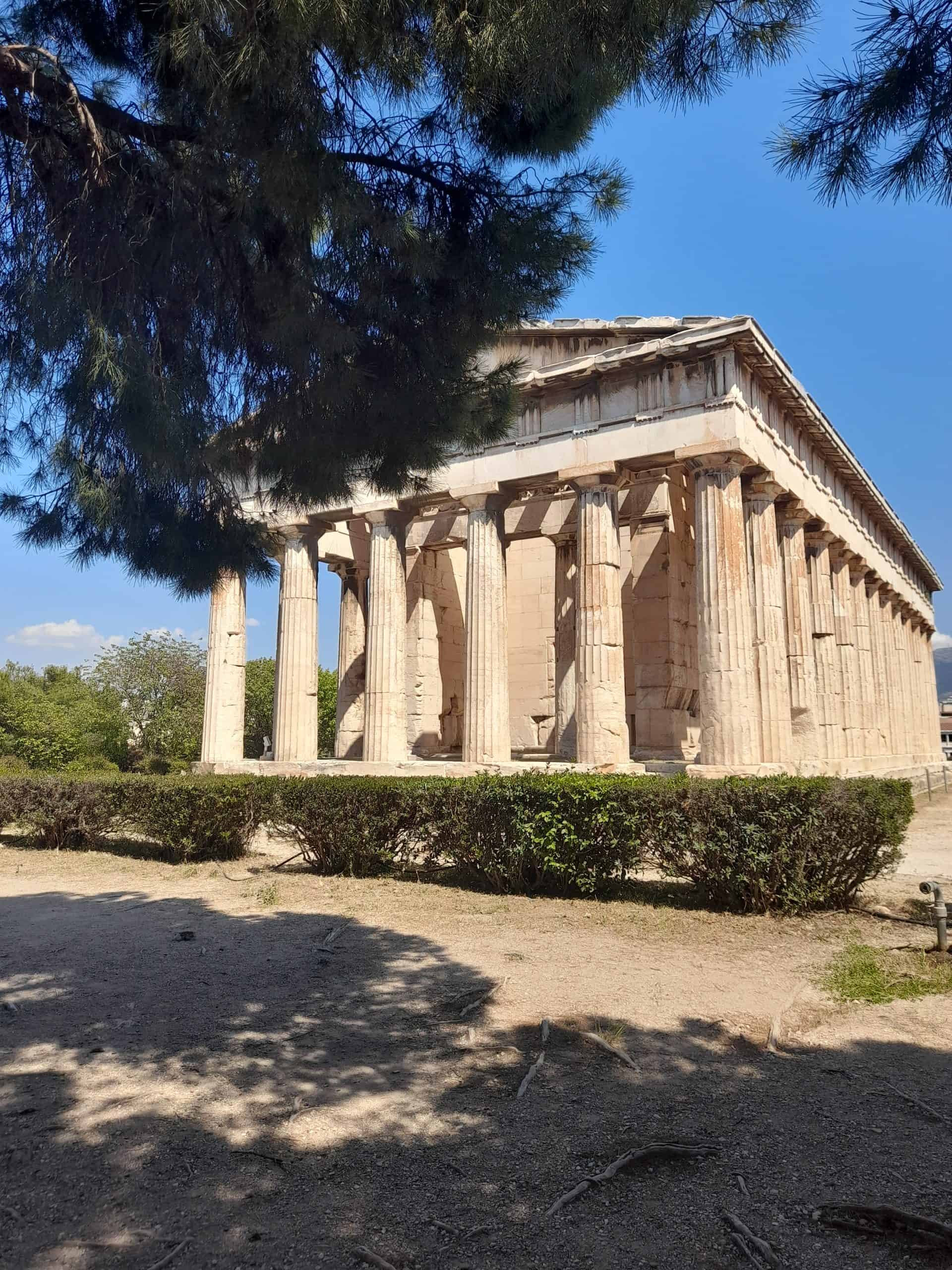 The Ancient Agora Athens is one of the most important historical sites in the Greek capital. It is also one of the most expansive and is well deserved of a few hours of your time during your trip in Athens.

This is one of the most visited places in all of Greece and for good reason. Visiting the Ancient Agora Athens provides a valuable glimpse into life in Greece during the Classical Ages.

Indeed, the main Athens central market is known as ¨Varvakios Agora¨ and local neighbourhood farmers markets are known as ¨Laiki Agora¨. However, while the purpose of Athens´ nearby Roman Agora was predominantly commercial, the Ancient Agora was mostly used for civil purposes.

The Stoa of Attalos was the city´s main marketplace. The two storey structure was home to over 40 shops and stalls during its heyday.

They sold everything from clothing and apparel, to fruits and vegetables. Many other buildings around the area were administrative in purpose.

In Ancient Greece, the Athens Agora was the place where locals would assemble to listen to important announcements and speeches. Even important Greek Philosophers once strolled through the cobbled boulevards of the Agora.

That includes the likes of Socrates, Plato, and Aristotle. Along the Panathenaic Way of the Ancient Agora, you are literally walking in the footsteps of Socrates.

The Stoa of Attalos & the Agora Museum

The Stoa of Attalos is a grand, collonaded structure that you will see on your left-hand side when you enter the Ancient Agora Athens site. Today, it houses the Agora Museum.

The Stoa was originally built in 159BC when King Attalos II of Pergamon gave it to the people of Athens as a gift because he loved the city so much.Sadly, it was largely destroyed by the Herulians in 267 AD.

The current structure was rebuilt in the 1950s. Explicit care was taken to restore the structure in order to make it as similar as possible to how it looked in ancient times. Despite being less than 100 years old, the new structure is marvellous and really does justice to King Attalos´ original.

The Agora museum is organised in chronological order. The items on display date all the way back to the Neolithic, Bronze, Iron, and Geometric periods.

Everything from antiques, intricately carved statues, weapons, and vases can be found inside. The exhibitions help take you on a journey back in time to paint a picture of what the Agora was once like during its heyday.

The Temple of Hephaestus

The Temple of Hephaestus is a grand Doric temple situated on an elevated mezzanine in the heart of the Athens Agora complex. It is the best-preserved Doric temple in the Greek world today.

The Acropolis´ Parthenon may get all of the glory but the Temple of Hephaestus is just as impressive. There is also a fascinating story about its discovery.

When the temple was first discovered, it was falsely believed to be dedicated to Theseus, the mythical son of Poseidon and founder of Athens. Consequently, the district around the temple was named ¨Thissio¨.

It was later realised that the temple was dedicated to Hephaestus, God of metal workers and fire, and Athena Ergane, Goddess of pottery and crafts. However, the district had already been named ¨Thissio¨ and so the name stuck.

The Temple of Hephaestus was built around the same time as the Parthenon. It dates back to 450 BC and was the first temple in the world to be made entirely out of pentelic marble

The Panathenaic Way was one of Athens´ main roads during ancient times. It ran from the city gates all the way up to Acropolis hill.

Originally, the road was built for the festival of Panathenaia, and takes its name from this event. Today, only a section of this road remains and can be found close to the Stoa of Attalos.

As you meander around the Ancient Agora Athens site, you will notice several random marble columns, inscribed stones. These once ran parallel to the Agora Athens or made up the buildings in the area. The Romans also used this road during their rule over the city.

The Church of the Holy Apostles

The Church of the Holy Apostles is the only medieval site that remains at the Agora Athens site. It dates back to the 10th century, making it one of the oldest surviving churches in Athens today.

Several medieval structures were found within the Agora complex when the area was excavated. Sadly, this is the only one that was well-preserved.

The interior of the church is just as beautiful as the exterior. Vibrant paintings on the inside walls depict various scenes from the Orthodox faith and date back to the 17th century. However, the doors to the church are often locked.

The Ancient Agora, Athens can be found at Adrianou 24. This is just outside Athens´ Thissio district.

General admission tickets to the Agora are €10 per person. However, children, students, and those over 65 may be eligible for reduced admission prices.

If you purchase the Athens and Acropolis city pass, it includes entrance to the Ancient Agora along with a number of other attractions – including the Acropolis, the Temple of Olympian Zeus, and Hadrian’s Library. This ticket costs €20.

The Agora is open from 08:00 am until 20:00 pm every day. Entrance is free on certain Greek public holidays.

Do you have any additional questions or queries about visiting the Ancient Agora Athens or drawing up an Athens itinerary? I have lived here since 2017. I am happy to assist with any questions you may have.