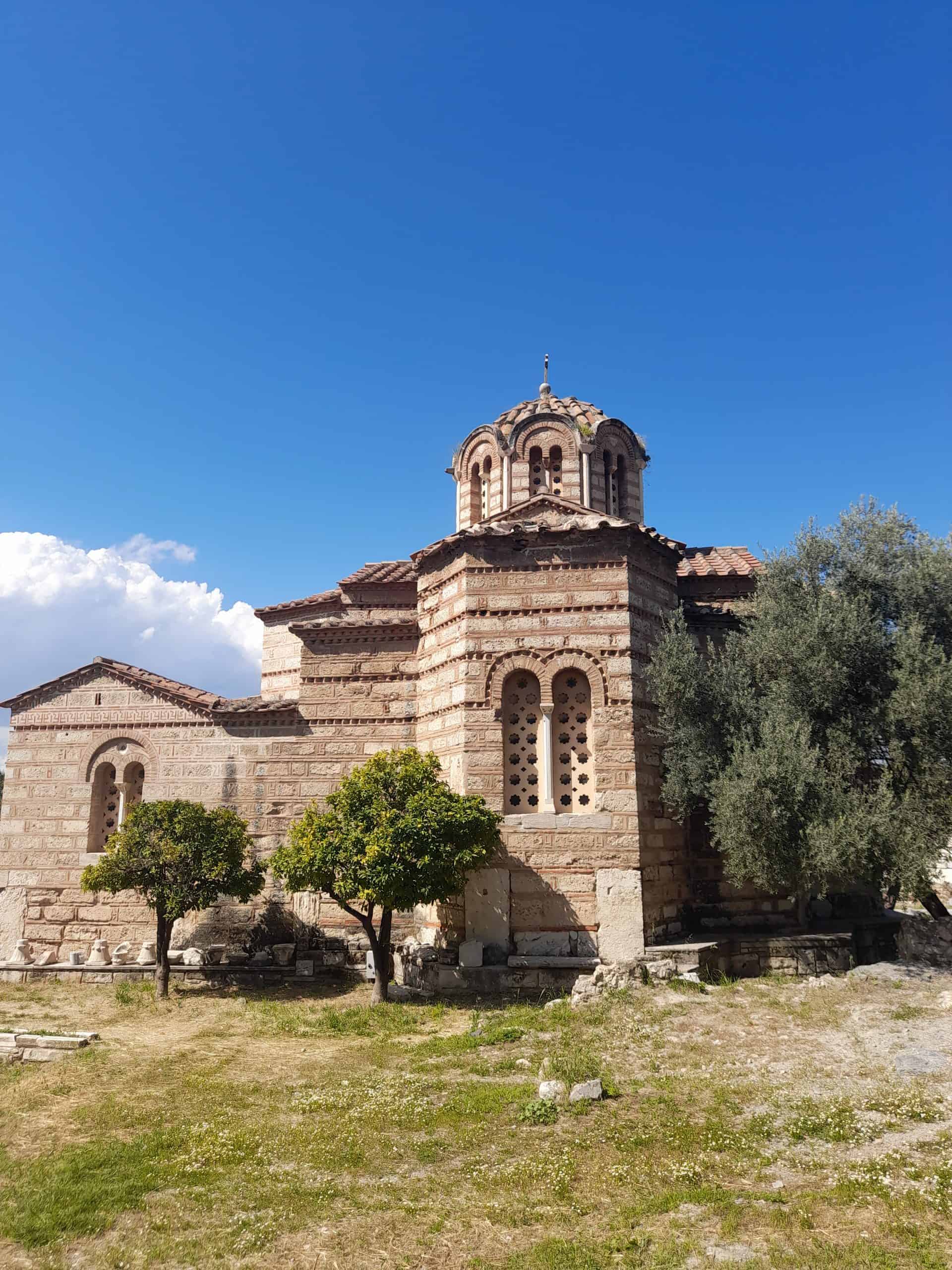 This should come as no surprise though. Afterall, this is a country whose identity and culture have been steeped in religion and the Orthodox faith for centuries.

Churches in Athens date back to the 5th century. A large proportion of them were constructed in the Byzantine era.

Their interiors are often as grand as their exteriors – their walls laden with gorgeous, vibrantly-coloured frescoes and golden icons. Many churches in Athens are shrouded in fascinating stories, myths, and legends.

Best Churches in Athens:
Notable Buildings to Look Out For

There are literally hundreds of churches in Athens. Each one has its charm.

However, with that said, there are definitely those that stand out among the crowd. Some of the most historically important, or aesthetically pleasing Athens churches, are detailed below.

Keep your eye out for these during your Athens itinerary. You don’t necessarily have to set time aside for them. You will probably pass them while exploring the city’s central neighbourhoods.

The Church of the Pantanassa, Monastiraki

Panagia Pantanassa is a quaint stone church that sits in the heart of Monastiraki Square. This is one of the busiest spots in the city, with crowds constantly congregating in the piazza to meet friends, watch street performers, or purchase Greek street food from the local vendors.

The little church provides a welcome contrast to the chaos that engulfs it. Its doors are usually open to the public, allowing you to go inside, admire the frescoes, and light a candle in memory of a lost loved one.

The church of Pantanassa is a three-aisle basilica. The structure that stands today is believed to date back to the 17th century. However, it is likely that it was built over an older monument.

Churches in Greece all have a specific day each year in which they celebrate their patron saints. The celebration for Panagia Pantanassa is the 15th August: the dormition of the virgin Mary.

The Church of the Holy Apostles, Thissio

The Church of the Holy Apostles sits within the confines of the Ancient Agora site in Thissio, central Athens. Dating back to the 10th century, this is one of the oldest churches in the city.
It is located at the far end of the old Panathenaic way within the Agora site.

Several medieval structures were found within the Agora complex when the area was excavated. Sadly, this is the only one that was well-preserved and that still remains today. The church is in excellent condition after undergoing a large restoration project in 1954.

It is believed that a religious building of some kind has always stood in this space. Indeed, the church has been built over the 2nd century Nymphaion.

Inside, the church’s paintings and frescoes date back to the 17th century. Unfortunately, the doors are often locked prohibiting entry.

The church’s original floor plan was that of a cross. It had apses on the four sides and a narthex on the west side. Four columns supported the dome and both the floor and the altar were made out of marble.

The Cathedral Church of Athens, Monastiraki

The Cathedral Church of Athens can be found in the central Monastiraki square of Mitropoleos. It is the headquarters of the Archbishop of Greece and thus, the most important church in the entirety of Greece.

The structure is imposing, elegant, and grand. It was designed by Theophil Hansen, a renowned Danish Neoclassical Architect. Hansen is also behind the design of several other stunning buildings in Athens city centre – including the Zappeion, and the National Library of Greece.

Construction of the church started on Christmas Day 1842. However, the building project was stopped and started again several times due to a lack of funds. It was finally completed in 1862.

Interestingly, the building was built using the rubble and remnants of more than 70 ruined churches that once stood around Greece. Two saints are enshrined here. Namely, they are Agia Filothei and Patriarch Gregory V.

Filothei was made a saint for saving Greek women who’d been taken into Turkish harems. Patriarch Gregory V was the 234th Patriarch of Constantinople (now Istanbul). His body was retrieved from the Bosphorus and brought back here after he was hung and thrown into the river.

Just beside the towering Cathedral Church of Athens stands a quaint stone church. This is the 12th century church of Agios Eleftherios.

The church has been completed in a Byzantine style. However much remains unknown about its history.

The carvings and friezes that decorate its exterior are an obscure medley of Christian and Pagan symbols. Here you will find images that depict the zodiac, various animals, and mythical creatures.

Although you will find shrines, candles, and icons scattered throughout the church’s interior, sadly none of its original frescoes have been preserved. A temple once stood on this site, dedicated to Eileithyia, goddess of childbirth. Materials gathered from the temple ruins were used to build the church.

The Church of Panagia Kapnikarea

The Church of Panagia Kapnikarea is one of the most important Byzantine structures that remain in Athens. It can be found on the bustling shopping street of Ermou that connects Monastiraki with Syntagma Square.

Thousands of locals and tourists walk past the church every day, or sit and have coffee on its walls, seemingly unaware of the significance of this site. The modern city has developed around it.

More than once, it has stood in the way of city redevelopment plans. Fortunately, more than once it has been spared by Kings and Governors who understood its cultural and historical significance.

Some uncertainty surrounds the precise history of the church. It is believed to date back to the 11th century when it was built over the remains of an Ancient Temple dedicated to the Goddess Athena.

It is dedicated to the Virgin Mary (Panagia). However, its name is quite peculiar.

There are a few theories as to how the Church of Panagia Kapnikarea got its name. One is that it stems from the Byzantine word for tax (“kapnikon”) or from the last name of the tax collector (“Kapnikares”) that was assigned to the church.

Another theory is that the name stems from the word “kapnismeni” which means “smoked” in Greek. Markings and burns within the church show that a fire damaged the building at one point.

Do you have any additional thoughts or questions about churches in Athens? Please don’t hesitate to reach out if you need anything. I have lived here since 2017 and I’m always happy to help.