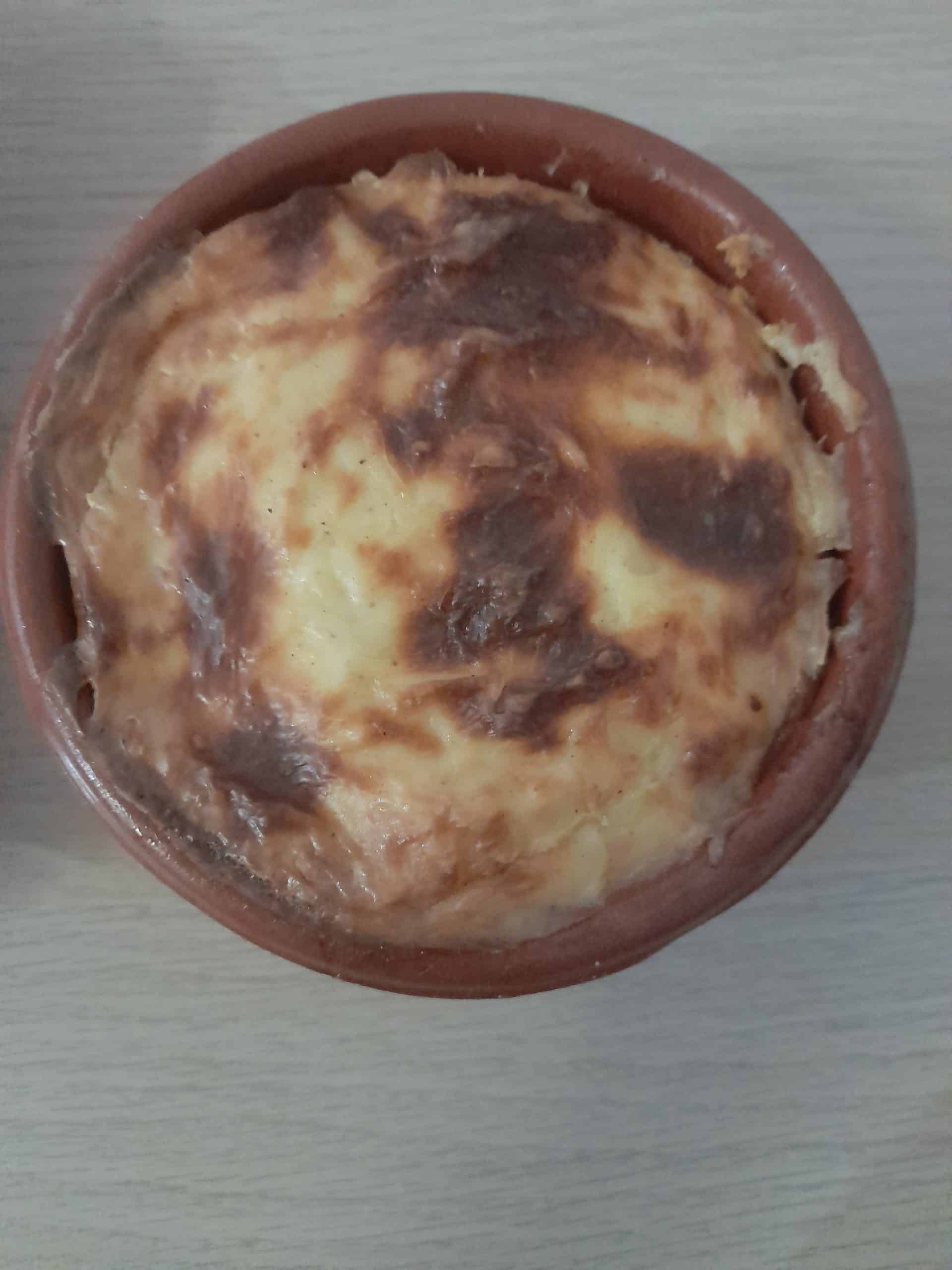 The national dish of Greece? Moussaka!

No trip to Greece is complete without sampling the local cuisine. Indeed, indulging in traditional Greek delicacies such as moussaka, pastitsio, horiatiki, and saganaki is as much of a highlight as a Mediterranean vacation as visiting archaeological sites or relaxing on beaches.

Greek cuisine is flavourful and varied. Indeed, there is far more to traditional Greek food than initially meets the eye.

You could spend a month in Greece and still find that you are continually discovering new dishes. But what is Greece’s national dish?

Ask most locals and they will respond with the same thing: moussaka. This hot pot dish graces the menus of most tavernas across the country.

What is the National Dish of Greece?

Moussaka is the national dish of Greece. This is a sumptuous dish that is in some ways comparable to Italian lasagne.

Moussaka is made up of layers of soft sheet pasta that are separated by eggplant, minced meat, vegetables, and a creamy, rich bechamel sauce. Some restaurants in Greece today also place their own modern, contemporary spin on the traditional dish.

Indeed, restaurants in Thessaloniki such as the innovative local favourite ¨Extravaganza¨ infuse spices and exotic, ethnic ingredients in their moussaka recipes. Similarly, many Greek restaurants are becoming more vegan and vegetarian-friendly.

It is easy to eat out as a vegan/vegetarian in Greece today. Vegan moussaka is found in many modern eateries.

The History and Origins of Moussaka

The precise origins of moussaka are unknown. While moussaka is widely regarded as being the national dish of Greece, it is also one of the most popular foods in Turkey.

That being said, there are notable differences in the way that moussaka is prepared in the two countries. Variations of moussaka are enjoyed throughout the Middle East and the Balkans.

One popular theory about the origins of moussaka is that it was invented by the Arabs. Many believe that they introduced it to the Greeks and Ottoman Turks when they brought eggplant into the region.

Indeed, the very first documented recipe of moussaka can be found in a medieval Arabic cookery book named ¨A Baghdad cookery book¨, or ¨Kitâb al Tabîkh¨.

However, the recipe that the national dish of Greece follows has changed substantially since then. Indeed, the creamy French bechamel sauce that is lathered over the layers of pasta is a recent addition to the dish.

It was not until 1920 that this ingredient was included. At this time, Greece had struggled for centuries under Ottoman Occupation.

So, Greek Chef, Nikos Tselementes decided to add bechamel in order to make the Greek moussaka recipe as different from the Turkish one as possible. Sometimes, potatoes are added to Greek moussaka but this is not the ¨typical¨ way of making the dish.

Where to Eat Good Moussaka

While there is arguably no such thing as bad Greek food, not all moussakas are created equal. You will find moussaka served everywhere in Greece – from Greek cities to the Greek island groups.

If you are in Athens, try to avoid the touristic al fresco-style Athens restaurants that sit close to tourist attractions and line the streets of Plaka, Thissio, and Monastiraki. Of course, many restaurants may brag about serving up the ¨best moussaka in Athens¨.

Nikitas (Agion Anargyron 19, Psiri) makes a great moussaka. This homely, traditional taverna has been one of the most popular eateries in Psiri for decades – way before the area became a popular Athens district.

Its quintessentially Greek menu offers Greece’s national dish, as well as a ton of other traditional favourites. Portions are hearty and prices are reasonable.

Here you can opt to sit indoors, or out on the promenade of Agion Anargyron, where the blue and white checkered tables are reminiscent of dining al fresco at an island in the Cyclades. Another great choice? Atitamos at Kapodistriou 2 close to Exarchia.

How is Moussaka Made?

This is the beauty of sampling moussaka at a family-owned Greek restaurant on your travels. No two moussakas are ever quite the same, but each is delicious and mouthwatering in its own right.

Some people boil and fry potatoes when they make moussaka. They then arrange them in a thin layer at the bottom of the dish. However, this is not the typical way.

There are essentially two distinctly different ways to prepare Greece’s National dish. Some people bake it in an oven.

Others make it like a casserole. Greeks, like Italians, are very passionate about their cuisine. Many have extremely strong views about why moussaka should be prepared this way and not that one so it’s best not to question them!

If you make moussaka in the oven, you will first of all cut eggplant into thin slices and fry it in extra virgin olive oil. Then, it will be laid out at the bottom of the tray.

Next, bury the eggplant under minced meat cooked in tomato sauce, layers of fresh pasta, sprinklings of Greek cheese, and finally, a generous lathering of bechamel sauce and cheese. Some restaurants cook their moussaka in individual pots.

So, when it is served to you, it is served steaming hot and fresh from the oven! Alternatively, some Greeks make moussaka in a pot on the oven hob.

They add all of the ingredients – the eggplants, the vegetables, and the meat, and cook them all together. If you want to make moussaka at home, there is an abundance of recipes online.

Try and find one from a Greek friend or online Greek chefs website. The best and most authentic recipes are those which you have to translate from Greek.

Other Contenders for the Title of Greeces National Dish

The national dish of Greece may well be moussaka, but it isn’t the only cuisine that the country is renowned for. Greek salads, gyros, souvlaki, kokoretsi, and fasolada are also very well known and popular.

Greek salad or ¨horiatiki¨ makes an appearance on virtually every dinner table in Greece. However, here salads are not eaten by one person as a main or a starter.

Instead, they are ordered for the table and shared between everyone as a side dish. It may come as a surprise to discover that there is actually no lettuce in a traditional Greek salad.

Indeed, many tavernas across the country will have menus that showcase a diverse array of salad choices – including their own creations. Horiatiki, like many national foods, has an interesting history behind it.

The salad was actually created ¨by accident¨by taverna owners in Plaka, Athens during the first Greek tourism boom of the 1960s and 70s. Today, it is locals and tourists alike that love the dish.

Horiatiki can be replicated anywhere across the globe. However, arguably the ¨secret¨ to the perfect Greek salad and the reason that this dish tastes so good in the Mediterranean is the ingredients.

Greeks make a habit of using fresh, locally sourced ingredients in their recipes. Greek tomatoes are unbelievably sweet and delicious. Even if you follow the exact same recipe in your home country, you are unlikely to experience the same burst of flavours and colours as you would in Greece.

Gyros are one of the most popular Greek street food choices. They also make a convenient dinner choice if you’re coming to the end of a tiring day in the middle of your Greece itinerary and don’t feel like sitting down at a restaurant.

Gyros are made from spit-roasted meat that is then wrapped in pita bread with tzatziki, sauce, salad, and other goodies. They are commonly made with chicken or pork and the meat is cooked on a rotating vertical rotisserie in a manner that is comparable to kebabs or shawarma.

One pita gyro typically costs between €2.40 and €3.20. It all depends on how touristy the area is.

If you want to try a gyro during your trip to Greece then don’t worry. You will find gyro places on practically every street corner!

Souvlaki could be considered another national dish of Greece. The word souvlaki stems from the Greek word ¨souvla¨ which means skewer.

Souvlaki can be found all over Greece. To make it, skewers of chicken, beef, or pork are marinated in a delicious blend of salt, pepper, garlic, oregano, and lemon juice. This is then grilled and typically served with a slice of pita, and a lemon to squeeze over for flavouring.

It tends to cost around €1.40 per stick of souvlaki, depending on where you go. You will probably need to order 2-3 to feel full, and they are great accompanied by fries.

Souvlaki is not only a popular Greek take-out dish, it also has a fascinating history and is believed to have roots in Ancient Greece. It is likely that souvlaki in some form has been eaten in Greece for more than one thousand years.

Kokoretsi is a popular Greek dish that is also enjoyed in other parts of the Balkans and Asia Minor. It is a staple at the Greek dinner table at Easter, but it can be found across the country throughout the year, particularly at BBQ restaurants and grill houses.

If you see (or smell!) Kokoretsi being made, your mouth will probably water at the scent of the marinated meat being gently cooked by the flames. That being said, kokoretsi is not necessarily for the faint-hearted.

Why not? Well, this dish is made with the internal organs of a lamb. Hearts, livers, lungs, and kidneys are wrapped in offal and then spit-roasted.

Like most Greek meat dishes, kokoretsi is wonderfully marinated and seasoned. The finished meat is so flavourful and melts in the mouth.

If you are fortunate enough to have any Greek friends and family, the best kokoretsi experience is to try it in someone’s home at Easter time. During Greek Easter (Pascha), families prepare kokoretsi and typically, spit-roasted goat, in their gardens.

Fasolada is a succulent Greek bean soup that you will find served as a starter in a lot of Greek restaurants and tavernas. This is a traditional Greek bean soup.

While many Greeks consider moussaka as the national dish of Greece, others believe that the rightful owner of the title is fasolada. To prepare the soup, white beans are soaked overnight.

They are then cooked with onions, garlic, celery, tomato passata, carrots, and a bay leaf. You can find this dish throughout the year in Greece.

However, it is more commonly made at home during the cooler Autumn and Winter months. Traditionally, fasolada is accompanied by feta cheese, olives, and raw onion. Sometimes, it is served with salted, smoked herring.

Do you have any additional thoughts or questions about Greece’s national dish, or about organising a trip to Greece in general? Please don’t hesitate to reach out to me.

I’ve been living in Greece since 2017. I’m happy to assist with any questions you may have.

Drop me a comment in the box below. I’ll get back to you ASAP.