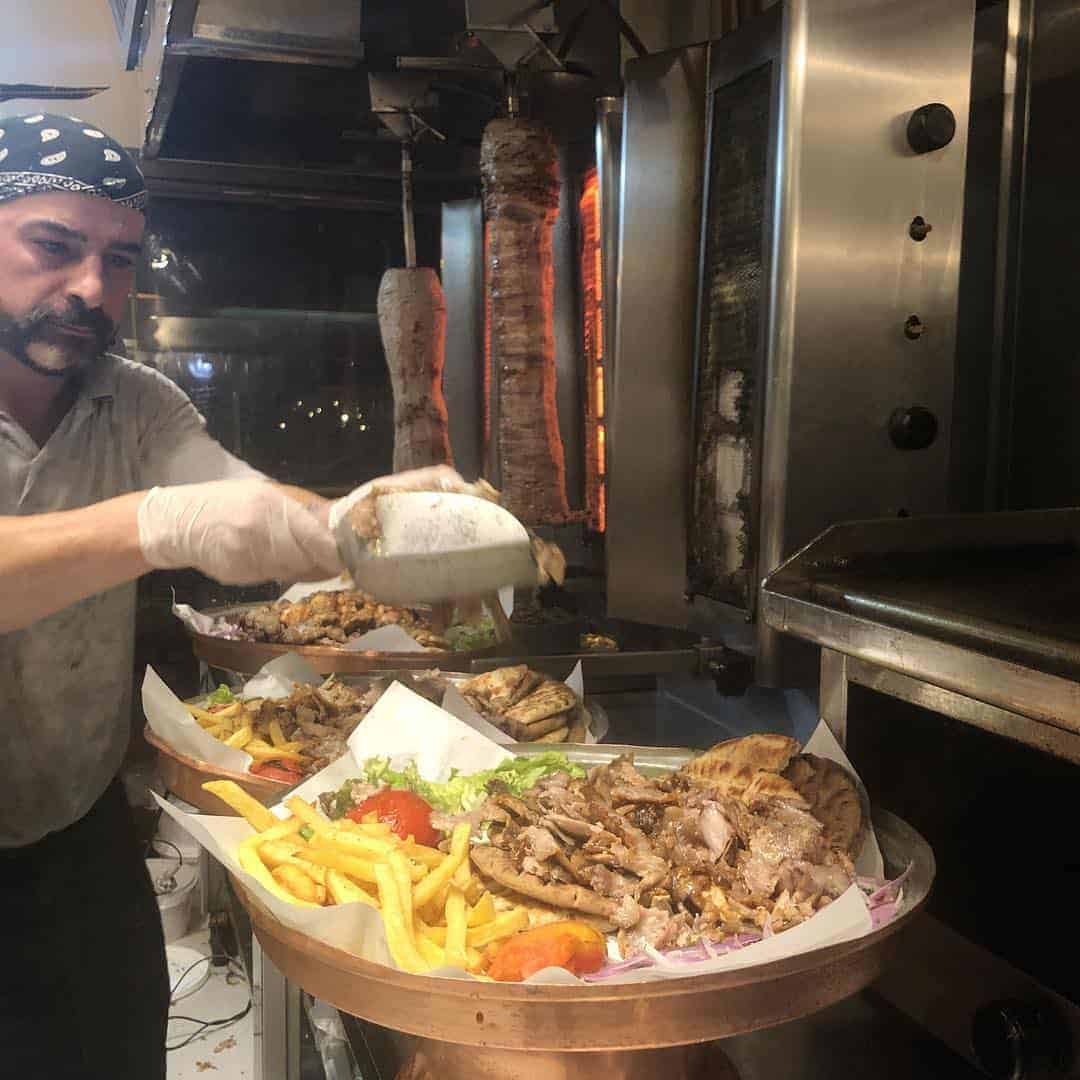 Greek street food is a big part of the dining culture in Greece. Grabbing something fast and convenient in Greece does not mean compromising on the flavour.

Crumbly home-baked pies, sumptuous marinated meats, and indulgent sweet treats are the Hellenic answer to street food. While these snacks and light bites are a great way to enjoy lunch in Greece on a budget, they are also filling and tasty.

Furthermore, Greek street food is often much healthier than its western “junk food” counterparts. A few quick eats to consider on your next trip to Greece are detailed below.

In Greece, you will find bakeries occupying virtually every street corner. This is particularly the case in the major towns and cities.

One of the most popular snacks beloved by locals is spanakopita – spinach pie. This pastry is made by combining crumbly feta cheese with spinach.

Next, it is enveloped in folded layers of warm filo pastry. A generously sized slab of spanakopita costs just €1.40.

Spanakopita is a perfectly filling snack to enjoy on the go or as a light lunch. Greeks often eat these pastries with a side serving of Greek yoghurt.

Tiropita is wonderful! Just don’t think about the calorie count! A large slab of tiropita usually costs around €1.40.

Skepasti is a sharing dish that you can find at a lot of gyro/souvlaki places and takeaways. Most tourists have never even heard of this. However, it is just as tasty as souvlaki! Skepasti could be compared to a Quesadilla or referred to as a Greek version of pizza.

This dish is made of two large circular pittas that are placed together like a sandwich. You can fill the middle of the skepasti with whatever you like.

Pork and chicken are popular fillings. A popular variation is to order skepasti with chicken, cheese, and vegetables (grilled onions and peppers).

Skepasti is huge and the dish is intended to be shared between two people. Fries are often served with the dish, along with a Greek mustard dip or tzatziki.

Koulouri is the Greek answer to the American pretzel. This is a circular piece of savoury, sesame seed bread that is often enjoyed with a strong Greek coffee at breakfast time.

You will find street vendors selling koulouri in the busy streets of downtown Athens and Thessaloniki. However, you can also find it in dedicated artisan koulouri stores and coffee shops.

Weird and wonderful variations of koulouri have emerged in recent years. You can buy koulouri that is filled with ham, cheese, and other savoury fillings.

Alternatively, you can find sweet variations made with chocolate chips instead of sesame seeds. A big circle of koulouri the size of your head will cost between €1.50 and €2.

Pies and pastries are a popular light lunch in Greece. Many Greek Yia Yias and mothers will bake their own batches of homemade pies. However, luckily, Greek bakeries also sell excellent versions that are cooked fresh each morning.

Tiropita and spanakopita are among the most popular pies. However, you can find regional creations that are specific to different areas of Greece. If you travel to Ioannina, and the Epirus region of Greece for example, you will note that this area is “famous” for pies.

Hortopita (pie filled with wild greens), sweet galatopita (milk pie), and indulgent karidopita (walnut pie) are all regional delicacies that you will find at the bakeries of beautiful Ioannina. As you travel around the different areas of Greece, browse and see what tasty baked goods you can find.

Bougatsa is a sweet breakfast pastry that comes from Thessaloniki. You will be able to find bougatsa across the country, but the “best of the best” is to be found in Thessaloniki in Northern Greece.

If you do find yourself in Thessaloniki, head to Bougatsa Bantis, a local favourite spot that has operated since 1969. It is referred to time and again as being one of the best restaurants in Thessaloniki.

Bougatsa is comprised of sweet semolina custard that is wrapped in neatly folded layers of thin, flaky filo pastry. It is then topped with generous sprinklings of icing sugar and cinnamon.

You can find variations of bougatsa, including savoury versions that contain minced meat. However, the traditional recipe is the version with semolina custard.

Peinirli is a Greek pizza-style dish that was brought to the country by Greeks that lived in the Black Sea more than a century ago. You will notice that Greek food  in general shares a lot of similarities with Turkish cuisine.

This dish is very similar to the Turkish “pide”. In fact, the origin of the dish’s name is Turkish. “Peynirli” means “with cheese” in Turkish.

You can add practically anything to peinirli, and you will find a diverse range of recipes for it across the country. It is usually more sandwich-like than a regular pizza and is made rich with butter and cheese.

Common fillings are things like ham and cheese. In some areas such as Volos, you can find sweet versions of peinirli that are filled to the brim with chocolate!

In Athens, hop on a bus to the northern suburb of Drosia if you want to sample the very best peinirli. Eleftheriadis and Themis are longstanding eateries beloved by locals.

Gyros are arguably one of the most popular Greek street food dishes. This is the go-to easy meal choice for tourists and Greeks when they are heading home at the end of a night out, or on occasions when they simply don’t feel like cooking.

These wraps are commonly made from pork or chicken. The meat is cooked on a rotating vertical rotisserie in a manner that is comparable to kebabs or shawarma.

The meat is then sliced from the spit and served in a pita with a generous serving of salad, french fries, and homemade tzatziki. Outside of super-touristic places, one pita gyro will usually cost around €2.40

Souvlaki sticks are Greek meat skewers, and one of the most popular Greek street food delicacies you will find. Souvlakia are traditionally prepared with pork, or sometimes beef. The meat is grilled and marinated with a delicious blend of salt, pepper, garlic, oregano, and lemon juice.

Want to hear a fascinating fact about souvlaki? This dish has been enjoyed in Greece for more than one thousand years now.

Greeks will typically buy a couple of skewers of Souvlaki. It tends to cost around €1.40 per stick. Traditionally, it is served with a small piece of bread and a lemon which is then squeezed over the top. If you don’t like pork or beef, you will often find that a lot of souvlaki/gyro places also serve marinated chicken breast skewers.

Galaktoboureko is a sweet Greek pastry that shares a lot of similarities with bougatsa. While bougatsa originated in Thessaloniki, the best galaktoboureko is to be found in the Karpenisi and the Evritania region of Central Greece.

The Greek dessert is then served with a layer of syrup. It is generally much creamier than bougatsa.

As you travel across Greece, you will find a lot of kebab houses. They are just as common as gyro shops and souvlaki places. While souvlaki and gyros are commonly made from pork, kebabs tend to be prepared with lamb or beef.

The dishes served and prepared at these places have both Greek and Turkish origins. You will note that there are a large variety of different style kebabs in Greece, so you never have to eat the same thing twice during your trip!

Cheese-stuffed keftedes are a particularly indulgent and sinful variation. These are beautifully marinated lamb or beef kebabs stuffed with feta or Roquefort cheese.

Yogurtlu kebabs (Yoğurtlu Köfte Kebabi) is a popular Ottoman dish that you will find here. It is made by mixing lamb and beef kofte kebabs with fresh Greek yoghurt, tomato sauce, herbs, and warm pitta.

Loukoumades are often referenced as being the Greek version of doughnuts. However, these sweet bite-sized little pastries are a dessert like no other.

Loukoumades are not large with holes inside of them like regular doughnuts. Instead, they are small and circular. They essentially have a dumpling-style appearance.

Traditionally, the dessert is deep-fried and then drizzled in honey or syrup. Variations of the treat have emerged in recent decades though, and now the possibilities of stuffings and fillings are endless!

Loukoumades are sometimes stuffed with fillings such as chocolate praline or Bavarian cream. You can then have them topped with an array of sweet sauces and syrups.

Dedicated sweet loukoumades stores exist across Athens, Thessaloniki, and other large Greek towns and cities. You can buy a box of 12-16 pieces intended for sharing for no more than a couple of euros.

When you see a street vendor in Greece and a cloud of smoke engulfing him, nine times out of ten, he will probably be preparing chestnuts. Greeks are crazy about the chestnut flavour and you will find chestnut vendors everywhere in the Autumn and Winter months.

In deli-style stores across the country, you will also find that people sell seasonal chestnut jams or candied chestnut desserts. Chestnut season in Greece starts around October. Vendors will cook these over hot charcoals and then serve them to you in paper cones for just a few euros.

In busy cosmopolitan areas of Athens and Thessaloniki you will find a lot of Greek Street Food Vendors selling an array of dried fruits and nuts. You will be able to select and weigh a mixture of different treats.

Popular variations include things like dried figs, raisins and apricots. Flavoured nuts, cashews, pistachios, sunflower seeds, and other healthy trail-mix type treats can also be purchased for just a few euros. This is a nice healthy snack to keep you energised during your day of sightseeing or hiking.

Corn on the Cob

Corn on the cob is a simple, yet tasty Greek street food that is enjoyed throughout the year. It is particularly enjoyable during the cold Greek winter months.

The Vendors prepare the corn fresh on the grill right before your eyes. Once cooked, a generous sprinkling of sea salt is added for taste.

You will find most of these delicacies in abundance as you travel around Greece. If there is a particular Greek street food snack that appeals to you, you can ask your hotel reception/Greek friends to tell you where you can find the best of that dish in the area.

We also have a handy service in Greece called E-food. This is the Greek answer to Uber Eats or other food delivery apps. You can order food for collection from nearby stores.

It shows you the distance of popular places based on your address/postcode. Alternatively, you can have it delivered.

Have any further questions about planning your adventure to Greece? I’ve spent the last three years living in Athens.

I have had the pleasure of travelling pretty extensively through this beautiful country during that time. If there is anything I can help you with, don’t hesitate to reach out via the comments below. Geia sou! Melissa xo