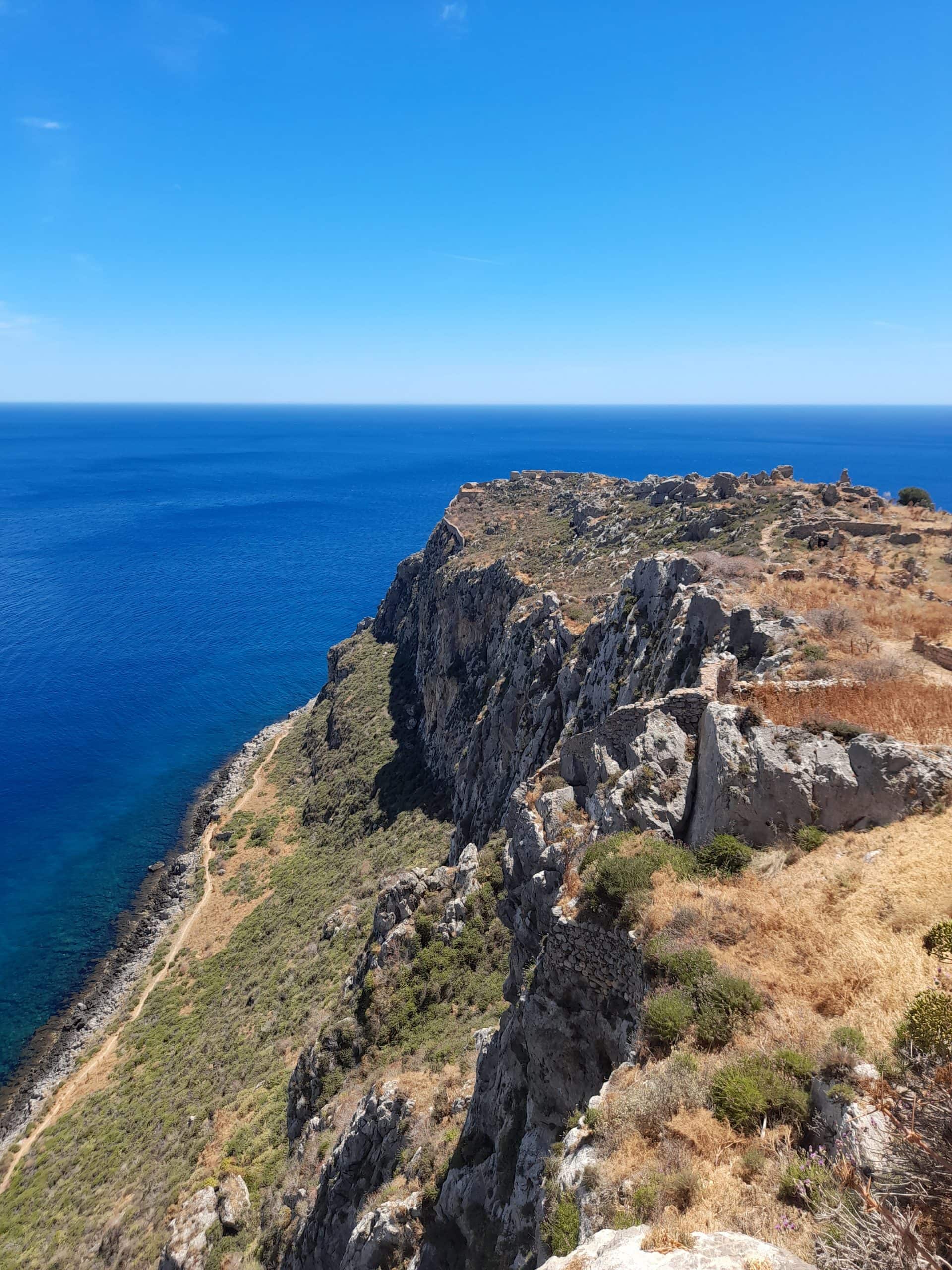 The Peloponnese, Greece is a region that legends are made of. If you’re looking for an area steeped in myths, magic, and history, this is a place to venture to.

The same strategic topography which at one time kept the defenders at bay, today attracts hordes of visitors with its striking landscapes, rich culture, and above all, delicious cuisine. This region has one of the most unique geographies in the country.

The Peloponnese abounds with dense forests, pristine white-sand beaches, quaint villages, and fragrant olive groves. The manmade Corinth canal separates the Peloponnese from mainland Greece. Indeed, the topography and culture here is so unique, it feels like a different country entirely.

The Peloponnese is located just 120 km west of Athens, which in turn is well served by international airlines. Consequently, getting to this historical destination has never been easier.

Falling in Love with the Peloponnese, Greece

The large peninsula of the Peloponnese abounds in ancient Mycenaean ruins that date back to 1600 BC. At this time, the Mycenaean civilisation dominated the whole of Greece.

While the names of Olympia, Mycenae, and Epidaurus often crop up in guide books, there are scores of lesser-known smaller archeological sites. These would be considered to be major attractions elsewhere, but the region is just so abundant in historical sites and ruins.

Legend has it that the Peloponnese got its name from the Ancient King “Pelops”. In fact, the direct translation of “Peloponnese” is “Pelops’ Island”.

The Mycenaeans ruled over the Peloponnese in the Bronze Age. However, the region, like much of Greece, has passed through several hands over the centuries.

Each of these various civilisations and conquerers have left their mark on the architecture, cuisine and culture of the Peloponnese. The Romans, the Slavs, the Arabs, the French, the Venetians and the Ottomans have all invaded the peninsula.

The Best Places to Visit in the Peloponnese

Since a vast area of Peloponnese is still unaffected by tourism, it offers exceptional value of money for all kinds of travellers. So head out to these particular hotspots before the crowds get there before you.

Far from the maddening crowds and just a couple of hours drive from Athens, an unforgettable odyssey awaits you in the knockout seaside sensation called Nafplio, arguably the most beautiful town in Greece.

This exceptional year-round destination, and the first Greek capital, has all the requisites of a wonderful city characterised by its rich culture and Greek history.

Best Things to do in Nafplio

The unique fairytale atmosphere of the imposing Greek castle town of Monemvasia, meaning ‘single entrance’, has made it a firm favourite with romance seekers. Protective measures imposed by the archaeological authorities have spared this region from the vagaries of urban sprawl. As such Monemvasia has managed to retain its sense of mystery till today.

The quickest way to get to Monemvasia from Athens is by the bus operated by KTEL Laconia. This completes the journey in four and a half hours.

The lesser-known island of Elafonisos awaits in the scenic Bay of Laconia just off the coast of the Peloponnese. The island paradise is surrounded by crystal-clear seas and home to some of the best sand beaches in Greece.

You don’t need trendy clothes to holiday here. A couple of tee shirts, sunglasses, sunscreen, and a snorkeling mask is enough.

Located 238 km west of Athens, Kalamata has developed into a rich cosmopolitan city. This is thanks, in part, to the region’s olive production. Kalamata olives have become a world-famous Greek delicacy. Additionally, Kalamata’s thousands of acres of fragrant olive groves, paradisical beaches, and fertile valleys provide a stunning backdrop to exploring the city.

Kalamata is conveniently nestled between the towering peak of Mt Taygetos and the depths of the Messinian Gulf. The many fine restaurants, historic buildings, pulsating nightlife, and an annual international dance festival has put Kalamata on the tourist map in recent years.

Reaching Kalamata is easy because the city is just twenty minutes away from the local airport and a leisurely three-hour drive from Athens.

The 620 m high steep hillside town of Mystras, rose like a phoenix after the fourth Crusade. Today, the town is home to the biggest collection of medieval ruins in the whole of Greece.

Mystras has a fascinating history. This also happens to be the place where the last Byzantine emperor was crowned.

A visit to Mystras is a unique experience as it mixes the beautiful topography with superb views of the Eurotas river.

The modern city of Corinth lies just an hour’s drive away from Athens, and seven kilometres from its ancient counterpart. At its height, it was considered to be one of the wealthiest states in Greece.

Present-day Cornith came into existence in 1858, after a massive earthquake leveled the latter. It is also the principal town of the municipality of Corinth, and also the seat for an archbishop.

Best Things to do in Corinth

Patras is Greece’s third-largest city and the largest settlement in the western part of the country. The city is famous for its Apokries (Carnival) celebrations that take place every spring in the lead up to Easter.

Apokries is one of the largest festivals in Greece. The celebration sees more than a million Greeks from across the country venture to Patras to participate in costumed street parties as papier-mache floats parade down the main streets.

The coastal town of Loutraki is situated just 16 km east of Corinth city in the east Akrotiri region of Greece. This lively seaside spa resort is about 80km or an hour’s drive away from the capital of Athens.

Visitors flock to Loutraki from all over the world for body treatments in the numerous natural therapeutic springs which are found here. The town was rebuilt from the rubble, after being completely destroyed by an earthquake in 1928.

Located in the south-central region of the Peloponnese, Mani is demarcated in two sections. Firstly, towards the south, we have The Deep Mani. This area is home to the town of Areopoli with its rugged coastline and largely uninhabited areas.

Then there is The Outer Mani with the charming villages of Stoupa and Kardamyli, which offer a unique holiday experience, unlike the other islands. This is a fascinating region filled with ancient towers, fortresses, and a fascinating history of tribal wars.

Things to do in Mani

The pretty seaside town of Pylos is the largest natural harbor in Peloponnese. The harbour is formed by the Sfaktiria Islet which protects the town from the harsh winds of the Ionian sea.

Pylos has emerged as a surging tourist destination over the last few years. Also known as Navarino, it was at one time the capital of the former Puglia Province, a municipality of Messenia.

Places to Visit in Pylos

Located in the centre of the extremely fertile Argolic plain, the mythical city of Argos is said to be one of the oldest in Europe. The settlement has been continuously inhabited for more than 7000 years.

Today, apart from being a popular tourist destination, Argos is the main trade and agricultural hub of Greece. It makes the perfect addition to any Greece itineraries.

The Peloponnese is often overlooked by most international visitors to Greece. However, its proximity to Athens along with its rich history, archeological sites, and opportunities for outdoor exploration make the Peloponnese a wonderful area to visit at any time of the year. No wonder people say that if you haven’t visited Peloponnese, then your Greek journey has not even begun.

Do you have any additional questions about visiting the Peloponnese, Greece? I have been living in Athens for the last four years.

I am happy to answer any queries that you may have about planning your trip to Greece. Safe travels! Geia sou, Melissa xo

1 thought on “Peloponnese, Greece: The Best Places to Visit in Greece’s Wildest Region”