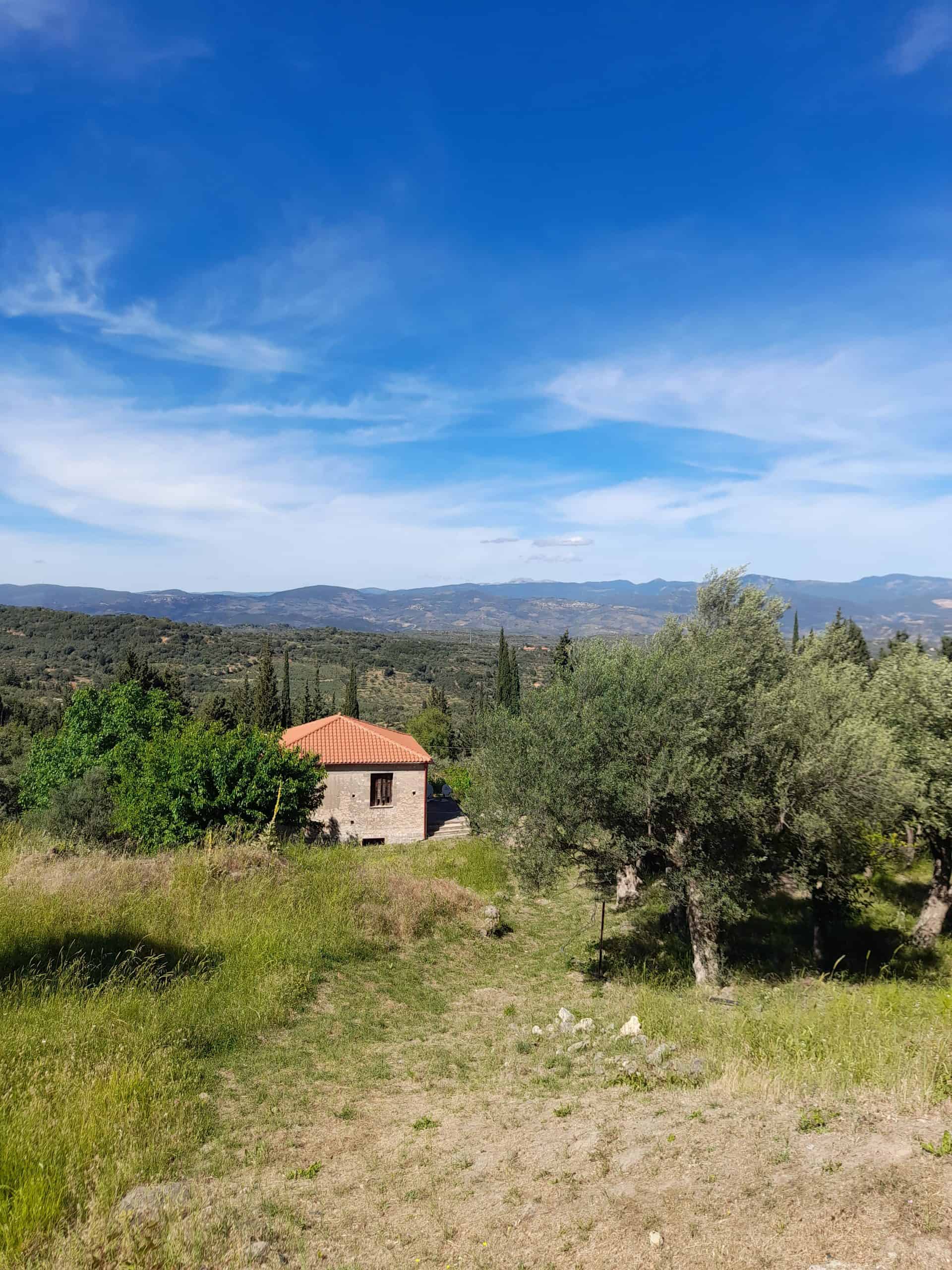 Lakonia Greece is a gorgeous region in the heart of the rugged Peloponnese. It is one of seven prefectures that make up this area. Ancient Sparta was constructed here. So too, were the magical castle towns of Mystras and Monemvasia.

Even so, Lakonia escapes the attention of most visitors to Greece. Mention “Lakonia” to the average tourist and they will probably have no idea what you are talking about.

That’s a shame, as this is arguably one of the most gorgeous regions in the country. At the same time, perhaps that isn’t a terrible thing.

Since the region is so far off the beaten path, it is seldom crowded. Lakonia’s villages are surrounded by rolling green hills, olive groves, orchards and olive trees.

Like most Greek municipalities, Lakonia has its own distinct culture and cuisine. The people here are among the friendliest in Greece. Welcome to the heart of the Peloponnese.

Places to Visit in Lakonia, Greece

You could easily dedicate two weeks of your Greece travel itinerary to exploring Lakonia. Even so, you would feel as though you have barely scratched beneath the surface.

Some of the region’s coastal towns and fishing villages boast beautiful beaches bordered by clear, turquoise waters. However the appeal of coming here is found in the history and the nature.

If you enjoy treading through crumbling ruins, and hiking through the foothills of dramatic mountain ranges, Lakonia, Greece may well be the perfect destination for you. Some of the best hiking trails in Greece can be found here. Lakonia is best enjoyed in the spring and autumn months, when the cooler temperatures better accommodate outdoor exploration.

Sparta/Sparti is the capital city of the Lakonia region of Greece. Despite being the regional capital, it is home to a population of just 16,000 people.

The Ancient city was famed for its Spartan warriors, renowned across the Mediterranean for their fighting abilities and fearless nature. Today, there are few remnants of Leonidas’ city.

The film “300” may have put Sparta on an international radar. But still, few tourists actually venture here.

Sparta sits beside the Eurotas river, in the shadow of Mount Taygetos. A few ruins are scattered around the city.

Notably, the Ancient Sparta ruined site that showcases an ill-preserved Ancient Greek theatre, what little remains of the Spartan Acropolis, and the Sparta Agora. The tomb of Leonidas sits at the centre of a little square that is now surrounded by kafenions where old men sip Greek coffee and play backgammon.

Sparta is not necessarily worthy of days of exploration. But it is pleasant to stop here for lunch and a quick meander through the ruins as part of a wider Laconia, Greece trip.

Where to Stay in Sparta

Gorgeous Elafonisos, with its transparent, cerulean waters and white-sand beaches is often referred to as being the “Caribbean of Greece”. This is one of the least-known islands in all of Greece. Elafonisos village “Chora” is the island’s capital and only settlement.

This quaint, picturesque fishing village oozes a character and charm that is so quintessentially Greek.The majority of houses, stores, and tavernas in Elafonisos village are painted white with blue shutters and windows.

Their blue and white tables, with blue and white checkered tablecloths are positioned right on the seafront – offering incredible views across the Aegean as you dine. Elafonisos village sits at a magnificent juxtaposition of tradition meets contemporary, modern living.

The village layout is a labyrinth-like network of narrow cobbled streets and passageways, filled with traditional architecture. While Elafonisos certainly feels like a journey back in time, the chora also boasts numerous chic cocktail bars, restaurants and hotels.

Where to Stay in Elafonisos

Beautiful Mystras is a little village in Laconia, Greece. It can be found just 5km away from Sparta.

Most people have never heard of Mystras. That is, unless they are either Greek or a massive Grecophile. But the village’s role in the nation’s history was significant.

The city thrived between 1271 and 1460. Once upon a time, it was the most important Byzantine capital. It was eventually abandoned in 1832, when nearby Sparta was founded.

Today, the well preserved fortified city of Mystras is the single most compelling set of medieval ruins in Greece. As you meander through the cobbled streets and promenades here, past the ancient palaces and monasteries, it is not hard to picture what life was like here centuries ago.

The entirety of the ancient city is UNESCO protected. From afar, all you can really see is the hilltop Mystras castle. But the ruins are expansive.

Look out for the 14th-century Convent of Pantanassa – the only religious structure here that is still occupied by nuns. The Monastery of Peribleptos is at the far corner of the site and easily missed. It has been carved into the rock face of a cliff and contains some impressive, if fading frescoes.

The Byzantines, the Franks, the Venetians, and the Turks all occupied Mystras at some point. You should dedicate at least three hours to exploring the site. Ruins aside, the nearby modern village is charming.

Where to Stay in Mystras

Areopoli is a small historic town in the southern part of Lakonia, in the Peloponnese. It takes its name from Aries, the Ancient Greek God of war. The name “Areopoli” literally means “city of Aries”.

The charming village is a highlight of any Peloponnese itinerary. It is filled with stone houses that are typical of the Mani region.

A settlement in some form has existed since the Paleolithic period. The village played an important role during the 1821 war of independence against the Turks.

It is for this reason that it received its name given after the god of war. Prior to receiving this name, it was called  “Tsimova”.

Where to Stay in Areopoli

Monemvasia is a charming medieval town situated on a small, rocky island just off the eastern coast of the Peloponnese. The island is joined to the mainland by a narrow, man made strait.

The name derives from two Greek words, mone and emvasia, meaning “single entrance”. In medieval times, access to the island town was possible only by boat, or via a wooden drawbridge. Eventually, the Venetians built a narrow walkway.

A giant earthquake in 375 AD separated the rock of Monemvasia from the Greek mainland. The original settlement dates back to the 6th century. At this time, residents of Ancient Laconia fled to Monemvasia in order to escape the Slavic invaders that occupied much of Greece.

Monemvasia thrived during the 13th century and became a significantly important Byzantine settlement, along with nearby Mystras. The town has passed through the hands of the Turks, the Venetians, and the Byzantines over the centuries.

Each has left its mark on Monemvasia’s unique architecture. Regardless of how many times you have seen photogenic Monemvasia in travel literature and magazines, nothing prepares you for the magic of coming here and navigating its narrow passageways yourself.

Where to Stay in Monemvasia

Gytheio is a lovely seaside town in the heart of Lakonia. It is just 65km away from Monemvasia, and 47km away from Mystras, respectively. Today, it is the second largest city in the Lakonia region, and the capital of Mani.

The town was the original port for Sparta during the days of the Odyssey and the Iliad. Like many places in Greece, Gytheio has strong links with Greek mythology.

Legend has it that Heracles and Apollo founded the city.

Where to Stay in Gytheio

The magnificent Diros Caves complex is arguably one of the most fascinating Neolithic-era sites in Greece and perhaps, all of Europe. The vast underground cave network consists of numerous different caves.

Only a few of these are open to the public. Meanwhile, others are currently being explored by archaeologists and scientists.

If you visit Lakonia, Greece, you can embark on a 40 minute tour of the Vlychada cave. Several fascinating animal remains and fossils have been found here, including the fossil of a hippopotamus that lived some 32,000 years ago.

Alepotrypa is another cave within the same complex. It is not currently open to the public. Recently, the perfectly preserved remains of a couple that lived 5,800 years ago were found here. Their grave was part of one of the biggest Neolithic burial sites ever found in Europe.

Have any additional questions about Lakonia, Greece, or planning a trip to Greece in general? Please don’t hesitate to reach out to me.

I have lived in Greece since 2017. I am happy to assist with any questions you may have.