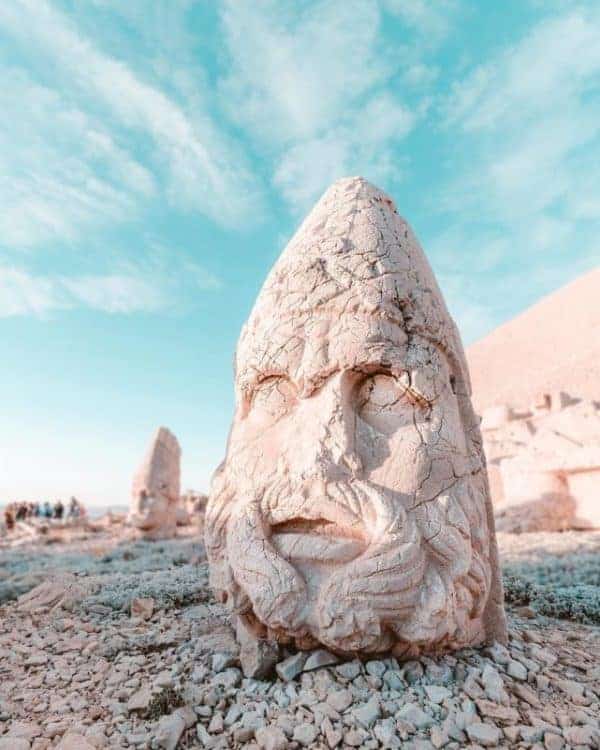 More and more people are starting to travel to Turkey again after worries about the safety of venturing there a few years ago. I’m really happy about this. I LOVE Turkey. Afterall, Ihave travelled to Turkey four times in the last five years as a solo female traveller! There are the culturally rich Turkish cities such as Izmir, Konya and Istanbul. There are incredible places that can be accessed by a day trip from Istanbul, and then of course, there’s the fairytale landscapes of Cappadocia.

While it’s impossible to dispute the appeal of any of these places, Turkey just has oh so much more to offer. What about trekking through remote mountains where eerie stone heads are scattered among the hilltops? How about beautiful islands that can only be explored on foot or by horse-drawn carriage? This article will review the best of the off-the-beaten path places to visit in Turkey.

Why Go Off the Beaten Path in Turkey?

If you want to have more authentic experiences when you travel, have better interactions with locals, and see majestic sites that are not crammed with hundreds of other adventurers, I always advise venturing off the beaten path. Turkey tourism largely revolves around the well-known cities and sites like Pamukkale and Cappadocia, but the other, less-known areas are every bit as impressive.

Off the Beaten Path in Turkey: Is it Safe?

Turkey is generally a safe place to travel to. The fact that Turkey borders Syria makes some people nervous, but Turkey is not Syria. While you should not go trekking alone alongside the Syrian border in Eastern Turkey, you should not let fear deter you from venturing to the rest of these off the beaten path places to visit in Turkey. Besides, terrorists are not exactly going to be loitering around ancient ruins and archaeological sites waiting to pounce on the one or two people that visit each year, are they?

After safety concerns a few years ago, the Turks have really upped their national security. They don’t want to live in fear or lose out on tourism, afterall. I have never felt unsafe in Turkey and you should feel assured that for the most part, the people are very kind and helpful.

Marvellous Off the Beaten Path Places to Visit in Turkey

Mount Nemrut is the place in Turkey that fascinated me the most. It is sometimes referred to as being the “Easter Island of Turkey”. Situated in the eastern part of the country,  Mount Nemrut towers above the clouds with its peak reaching 2,150 metres high. The highlight of visiting is not the mountain itself, but the eerie giant stone heads that are scattered around the area. The heads depict various ancient Greek and Persian gods, which have unfortunately toppled off the bodies, weathered by time and the elements.

The UNESCO protected site was built as a tomb and shrine to King Antiochus I Theos from the Kingdom of Commagene. Travelling in Eastern Turkey is an altogether different experience to western (“European”) Turkey or the central region of Anatolia. You can stay in the nearby villages of Karadut and Kahta on your route towards Nemrut Dag. The villages see less than a handful of tourists and given that they are tucked away in a rural mountain valley, they offer rustic, unique accommodation. Venturing into eastern Turkey and experiencing the cultural difference is all part of the appeal of visiting Nemrut Dag.

#2 Büyükada and the Prince’s Islands

The Prince’s islands are among the best off the beaten path places to visit in Turkey. They are easily accessible via a day trip from Istanbul, and within just a matter of hours, you can find yourself away from the chaos of Turkey’s largest city and in the midst of the peaceful serenity of nature.  The floating archipelago are easily reachable via a short ferry ride from Istanbul’s kabatas port. Here, cars are prohibited and people get around on foot or by horse-drawn carriage!

Büyükada is the largest of the islands and boasts numerous hiking trails, beautiful Greek Orthodox churches, and quaint coffee shops. In the summer months, the islands can get a little crowded with locals fleeing the cities for a bit of a retreat, however, the Prince’s Islands are still relatively unknown on an international tourism scale.

Konya was one of my favourite stops on my Turkey itinerary. Located in the centre of Turkey’s Anatolian plains, the city can seem conservative and intimidating at first glance. Konya is likely one of the most religious places that you are likely to stop off at during your adventures through Turkey. It is famed internationally for being the final resting place of the Poet and Philosopher Rumi (known locally as “Mevlana”).

Visiting the Mevlana museum and the ornate mosque that adjoins it is certainly one of the city’s main attractions. Also fascinating though are the narrow, labyrinth-like passageways that house traditional souks where vendors sell everything from delicious cups of hot salep, to rich tapestries, Turkish carpets and fabrics. Sample some of the local delicacies while in town such as the Konya kebab, catch a whirling dervishes show (the tradition originated here in Konya!) and hitch a ride out to the small village of Catal Huyuk – one of the oldest human civilisations in the world.

#4 Explore Cappadocia Off the Tourist Trail

“Melissa that’s cheating!” I can hear you wail. Bear with me. I know Cappadocia is pretty much everyone’s top place to visit in Turkey now thanks to Instagram, but I’m not talking about the balloons in Goreme. I’m talking about the other Cappadocia. The true, fascinating side of the region that is often overlooked because everyone’s main priority is to take pretty photos of themselves staring pensively at the balloons (ooh, shade).

People focus their Cappadocia itinerary around the balloons which is a shame because they are simply the icing on the Cappadocia cake. The region is comprised of several towns, villages and cities. One of the most fascinating aspects of travelling here is the old silk road architecture and history that can be found off the beaten path. Cappadocia and Turkey were once on the old camel caravan trading route. Old caravanseries that once provided shelter for traders and their camels, beautiful ancient orthodox churches, and villages where people continue to live in caves all await travellers away from the main tourist trail.

#5 See Hasankeyf Before it Sinks

Like the Italian city of Venice, many believe that Hasankeyf’s days are limited. The ancient village is close to the city of Batman (yes you read that correctly) and is believed to be one of the oldest human settlements in the world – dating back over 12,000 years and passing hands through over 20 different rulers. The village is famed for its man-made caves that were carved into the nearby limestone and used as homes. A huge construction project is underway to build a dam. Sadly, no consideration for protecting the history at Hasankeyf has been made. Once the dam is completed, it will only be a matter of time until Hasankeyf is completely underwater.

If you follow this blog and my travels, you will know that creepy abandoned places are kind of my forte. (I know right, so feminine!) Kayakoy is an abandoned ghost town situated approximately 30 minutes away from Fethiye.

Up until the 1920s, Karakoy was a bustling town known as Levissi. Here, Orthodox Greek Christians and local Anatolian Muslims lived and worked in harmony with each other in spite of their cultural and religious differences. The children from the two cultures played together in the streets, and the adults traded and socialised.

All was well in Levissi until 1923 when the Greeks were expelled back to Greece. A 7.1 magnitude earthquake then tore through the area in 1957, at which point the final inhabitants fled. Now, Levissi is known as “Kayakoy” or “rock village”. Peering at the hundreds of restaurants, houses and Orthodox chapels from a distance, once may not immediately realise that Kayakoy is abandoned. It’s possible to spend a whole day wandering the streets and entering the old restaurants and churches, trying to envisage what the spooky place was like during a happier period.

#7 Explore the Kurdish City of Van

Situated on the banks of Lake Van, the Turkish city of Van is a fascinating place, and very worth of a day or two’s exploration. Lake Van is the largest lake in the country, so huge even that many of the locals refer to it as a sea and not a lake. In its centre is Akdamar island, home to one of the last remaining Armenian churches in Turkey and a place of breathtaking beauty.

The abandoned ghost city of Ani awaits on the closed border between Turkey and Armenia. Previously known as being the “city of 1001 churches”, the city was once home to over 100,000 people and filled with countless beautifully ornate Armenian churches decorated with vivid, elaborate frescoes.

Abandoned for centuries, Ani has fallen into disrepair and many of the churches are now crumbling shells of their former glory. Restrictions were previously in place on to Ani and the area had a strong military presence which has eased up in recent years. That considered, very very few make it to Ani or even know of its existence.

#9 Marvel at the Grand Ishak Pasha Palace of Dogubayazit

The scenery that surrounds the sprawling Ishak Pasha Palace of Dogubayazit is dramatic say the least. Situated on a small plateau with a backdrop of stark, towering cliffs, the spectacle is breathtaking. The palace in the Eastern part of the country can be tied in with a visit out to Nemrut Dag. Created using a mix of Persian and Armenian designs, the sprawling complex is filled with ornate, well-preserved courtyards, harems and mosques. There is a very Middle Eastern feel to the place which is quite unlike anything other places to visit in Turkey.

If you follow the road up from the palace, past its car park, and up towards the mountain peaks, you can enjoy incredible panoramic views over Dogubayazit palace, its namesake city beyond, and even Mount Ararat.

#10 Row Out to the Floating Fortress of Kizkalesi

The fortress of Kizkalesi or “Maiden’s castle” as it is also known lies close to Mersin. Legend has it that a Sultan built the grand fortress to protect his daughter. The island that surrounds Kizkalesi is tiny – quite literally it is big enough to only hold the fortress and nothing more! As such, the fortress seemingly floats in the middle of the sea.

The fortress passed hands many times over the years, and was used as a base for Armenian kings. Sadly it has fallen into disrepair, however you can rent obscure dolphin-shaped boats from the mainland and row out to explore the site. As night falls and the castle is illuminated by twinkling lights, it creates an altogether rather eerie atmosphere.

This is just a snapshot of some of the most unusual and often forgotten places to visit in Turkey. Do you have any others to add to the list? I will update it as I discover this beautiful land more and more.