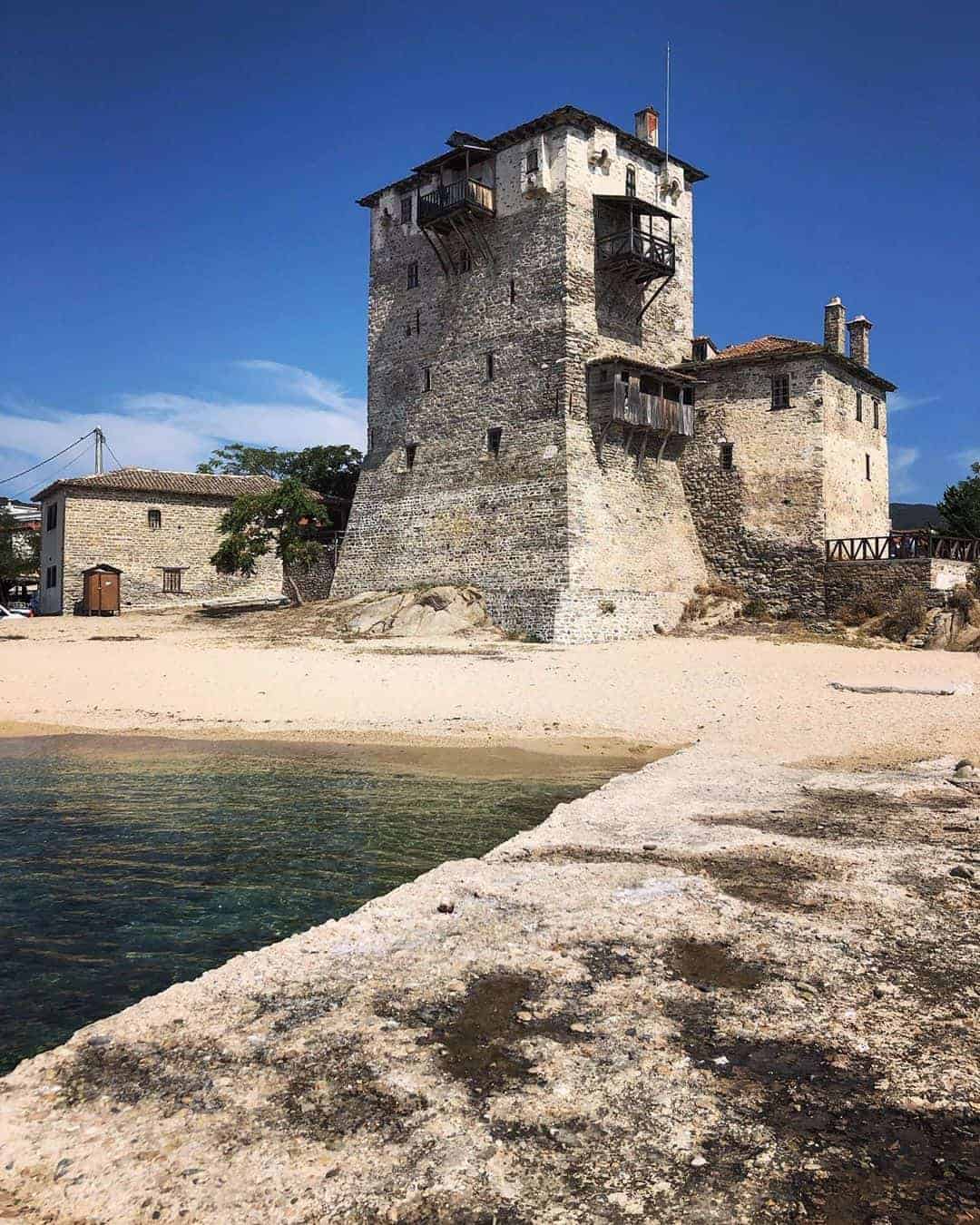 A visit to Mount Athos is a nice way to inject some culture into your Halkidiki vacation. Most people tend to travel to Halkidiki for a slice of R&R on the area’s pristine beaches.

However, the region is also home to Athos. This holy peninsula is home to one of the largest monastic communities in all of Europe.

Where is Mount Athos?

Mount Athos is one of the three peninsulas of Halkidiki in northeastern Greece. Halkidiki is comprised of three “legs” that extend out into the sea like Poseidon’s trident.

Those are Sithonia, Kassandra, and Athos. The former two are comprised of quaint stone villages, touristic resorts, and idyllic beaches.

Meanwhile, Athos is holy ground. Although this area sits within Greece, Athos is an autonomous state.

Unfortunately, female travellers are not permitted to enter the monasteries of Mount Athos. It is said that the Virgin Mary once walked along these shores and claimed beautiful Athos for herself.

The closest that women travellers can get to them by land is the port town of Ouranoupoli. From there, it is possible to take a boat tour that sails around the circumference of the region and allows you to see Athos from the water.

The boat must keep a set distance (500m)  from the shores, so as not to taint the holy ground with feminine wiles! If you are a female traveller considering whether you can stuff a sock down your pants, put on a gruff voice, and infiltrate Athos as Melvin, think again. Several female travellers have actually been caught and arrested because of this!

A boat tour is the best way to visit Mount Athos. Various local companies organise daily tours from Ouranoupoli. The boats sail around the Athos peninsula and provide information on the history of the monasteries as they go.

Many local companies offer Mount Athos tours. Opting to participate in one can take a lot of the stress out of figuring out how to get from A to B as many include pick-up from your hotel. It is completely possible to arrive in Ouranopoli independently and wait for a boat.

However, the boats do get extremely full and it is worth reserving your place online in advance to avoid waiting around on the day. A number of reputable tours are detailed below.

What to Expect on a Mount Athos Tour

Many also boast glass bottoms that enable you to see the beautiful tropical fish that reside beneath the warm waters of Halkidiki. The tours typically also have another stopping point. For instance, nearby Ammouliani island, or the picturesque town of Ierissos

The cruise around Athos takes approximately three and a half hours. Boats get very crowded, so try and arrive thirty minutes before departure.

You have a better view of the monasteries if you are sitting on the upper deck or at the front of the boat. A word of warning if you sit at the front though: splash zone!

The seas that surround Athos are renowned for being somewhat ferocious. As such, you should be prepared to get wet and experience choppy waters if you sit at the front.

That said, you are quite far from the monasteries from the boat. As such, it is hard to see well from the windows inside.

The stop off at Ammouliani island is just as enjoyable as seeing the monasteries. You can revel in the opportunity to wander through the narrow cobbled streets and passageways of Ammouliani’s old town or swim in the cerulean waters of Alykes beach.

Is a Mount Athos Tour Worth it?

So is a boat tour of Mount Athos really worth it? If you are staying in a nearby resort in Halkidiki, and you want a change of pace then perhaps so.

Alternatively, if you are looking to travel to Athos from Thessaloniki, it’s a bit of a trek. It’s really your call as to whether the journey is worth it or not for you. However, the limited visibility from the boat is something to consider.

The Monasteries and Monastic Life

Mount Athos is the largest monastic community in Europe and the oldest in the world. The second largest is Meteora, which sits a couple of hundred miles away from here in Kalambaka.

There are 20 monasteries, and more than 2000 monks based on Mount Athos. A monastic community has existed here since the 9th century and the monks that reside here today still live a very traditional life. They follow practices just like previous generations of Monks would have done several centuries ago.

The Life of a Monk

Most of the monks’ schedules revolve around prayer. Women, including female animals, are considered a temptation that may lead monks to sin. This is why they are not permitted on the island.

Even warm showers are not permitted. Monks must live very simple lives free from “luxuries”.

The monasteries of Athos are renowned for their ornate beauty, grand interiors, and vibrant frescoes. It is just unfortunate that most travellers are unable to see them up close.

All of the monasteries are Orthodox. However, they are each built in different styles.

Look out for the Saint Panteleimon Monastery during the boat tour. This is a Russian monastery that shimmers in shades of white and green,

Male Travellers:
Getting a Permit to Visit the Monasteries

Male travellers may be able to get a permit for visiting the monasteries. However, the process for obtaining this is not easy, and an application must be made six months in advance of travel.

The Athos monasteries only issue a limited number of permits per year. These are typically reserved for pilgrims and those with a strong religious interest in the monasteries.

The Athos visitor’s permit is called a “Diamonitirion”. Once received, it is valid for four days.

You can apply for this via phone or email. You must send a copy of your passport, in addition to the €30 admin fee.

If your application is successful, you will receive a letter containing instructions about visiting Mount Athos. Then, you must call to confirm your reservation two weeks in advance of your Greece trip.

The email address for obtaining a Diamonitirion is:

The telephone number to obtain a Diamonitirion is:

The postal address for the Pilgrim’s bureau is:

Getting to Mount Athos.

It is relatively easy to reach Mount Athos. This is true whether you plan on travelling by public transport, or you intend to rent a car in Greece.

KTEL buses run to Ouranoupoli from Thessaloniki and various points across Halkidiki. The schedule changes with the seasons.

There is, of course, a higher frequency of services in the summer. Check the KTEL bus schedule for the precise departure times.

If you intend to visit Mount Athos on a day trip from Thessaloniki, it may be easier to do a day tour with a local travel company. The prices work out roughly the same as when buying separate bus and boat tickets.

This takes out some of the stress of worrying about getting your return bus to Thessaloniki. A day tour from Thessaloniki to Ouranoupoli/Mount Athos including transfers and boat tours costs approximately €20-25.

Do you have any additional questions about exploring the peninsulas of beautiful Halkidiki?

I have travelled pretty extensively around the northern part of the country and I am happy to answer any questions you may have. Feel free to drop me a comment below, and I will get back to you as soon as I can.

While you are in the area, you may also want to consider exploring some of the other off-the-beaten-path parts of Halkidiki. For instance, the charming village of Nikiti, or the uninhabited island paradise of Diaporos.