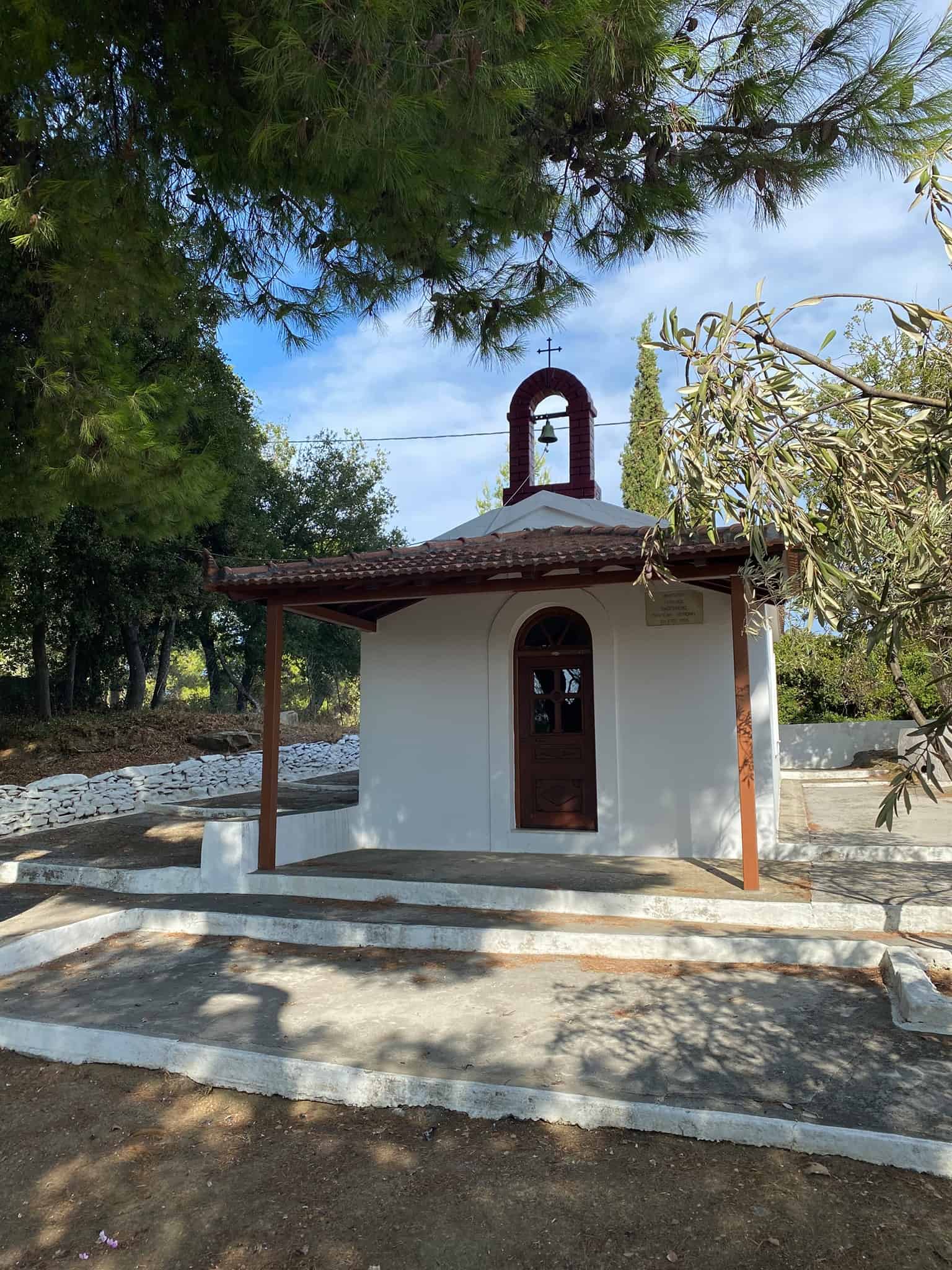 Skopelos churches can be found at virtually every turn on the blue green island of Skopelos. Indeed, island residents follow the Greek Orthodox faith and most are deeply religious.

It should come as no surprise then, that there are over 360 churches scattered across the island –  a relative amount for an island with an area of just 96.3 km². It is estimated that there are around 100 Skopelos churches within the town limits alone.

However, there is much local debate and disagreement about the precise number – where the “limits” of town lie, what can be counted as a church, etc. Small town politics.

Among the 360 or so Skopelos churches, there are of course those that are renowned. Most notably, the church of Agios Ioannis Kastri, of “Mamma Mia!” fame, is often one of the reasons that Skopelos island is on people’s travel radars in the first place.

Similarly, the Church of the Virgin Mary (Panagitsa of Pyrgos) sits at the seafront at Skopelos port where it greets travellers sailing here for the first time. From its stairs and balconies, you have phenomenal views across the Aegean, with Alonissos island shimmering in the distance.

However, renowned spots aside, some of the most charming Skopelos churches are often found hidden away in the woodlands. Some sit down unsuspecting dirt trails, tucked away from view.

Peering through their dusty windows enables you to see inside and catch a glimpse of colourful religious icons, alters, and frescoes. However they are often locked and inaccessible, closed off until a local villager comes by with the key to pray or tidy up the interiors.

This all somehow adds to the mystery. Occasionally you will come back from hiking in Skopelos and pass a church that was locked earlier to see a candle burning inside and nobody around. There are also some small private churches that are set inside people’s own gardens.

Many Skopelos churches also have very limited information surrounding them. For instance, they are not marked on any map, or they are marked with mysterious names such as “historic wayside shrine 1”, “historic wayside shrine 2”. Finding information about which saints they are consecrated to, their history, and their construction, requires a little digging for information, enquiring with locals, or deciphering the faded Greek letters above their doorways.

Churches and Shrines in Skopelos Town

The 17th century Panagitsa of Pyrgos is the first church you see when your ship pulls into the island. Small, winding narrow steps lead up to it and a visit to the church can easily be paired with a visit to the nearby Venetian castle (“kastro”).

Vibrant frescoes inside the Panagitsa of Pyrgos display scenes from both the Old and New Testaments. The door is often locked, with the church opening at specific (seemingly ever-changing) times during the summer. This is a popular venue for Skopeliti weddings and ceremonies.

The Holy Temple of Agios Athanasios awaits nearby at the Kastro. This 11th century place of worship was the very first temple on the island.

The Church of the Nativity of Christ

The 1765 Skopelos Church of the Nativity of Christ is just a short walk away from the Panagitsa of Pyrgos. Various important relics are stored here and available for viewing, including relics of St. Riginos (the island’s patron saint).

Alexis Orlov, a Russian soldier, donated the church bell in 1770. It was donated as a thank you for the islander’s assistance in defeating a Turkish fleet during the battle of Cesme that same year.

The Church of Panagia Eleftherotria

Taking a left turn at Platanos Square leads you to a narrow cobbled street with a few local stores and a beautiful stone church. This is the church of Panagia Eleftherotria.

There is some debate as to the initial construction date of the church. The inscriptions above the door state it as 1871. However, smaller marbles around the building reference the 16th century.

The church has been built in a Byzantine style, quite unlike the vast majority of other Skopelos churches. You will not find another church that looks like this one across the whole island.

The Holy Temple of Agioi Apostoloi

The 11th century Holy Temple of Agioi Apostoloi can be found next to the Town Hall, in the heart of Old Town Skopelos. It is believed that an ancient temple devoted to the Goddess Athena once stood on these grounds.

Agioi Apostoloi was expanded and renovated in the centuries following the 11th century. Many of its frescoes and murals date back to the 16th century.

The Church of Agios Michail Synadon

The church of Agios Michail Synadon sits just beneath the Kastro in the Chora. One of the most unique and interesting things about this church is the five Roman sarcophagi that have been built into the walls.

There is little information as to who these graves belong to and why. Similarly, you can also find the remnants of a Greek burial site here, with faded inscriptions that point back to the 2nd century.

The church itself dates back to the 17th century. However many of the graves and inscriptions date back to the 1st and 2nd centuries.

Churches aside, there are 24 monasteries in Skopelos. Three of these are Byzantine monasteries.

Some of the most impressive and easily accessed sit on the slopes of Mount Palouki. The T1 hiking trail connects Skopelos town to the monasteries of Sotiros (the saviour), Prodromou (the baptist), St. Barbara, and Evangelistria.

You will also find the stunning Skopelos churches of St Anna and the Holy Trinity, and the Archangels along this route. Most monasteries and churches in Palouki tend to open at around 8am, close for siesta around 2.30pm, and then open again from 5.30pm until around 8.30pm. It is prudent to check the specific timings with your hotel before you set out as this is often subject to change.

The Monastery of Agios Riginos

The Monastery of Agios Riginos sits 4km south of the town. It is dedicated to the patron saint of Skopelos and in fact, there is an interesting story of magic and legends that surrounds him.

Legend has it that the area of Skopelos that sits between Stafylos and Cape Amarandos is known as Drakontoschima. Yes, like dragons.

The story states that in ancient times, Skopelos was inhabited by a dragon that terrorised and killed all of the people living on the island. That is, until the Skopeliti hero, Agios Riginos chased him towards the sea where he veered off a cliff.

This gorgeous, red roof monastery was built in 1728. It was then restored and repaired in 1960.

The Monastery of the Archangels (Taxiarches)

The 1672 Monastery of the Archangels (Taxiarches) lies 2.5km away from the village of Glossa in northwestern Skopelos. It is widely regarded as being one of the finest pieces of post-Byzantine era architecture in the entirety of the Sporades islands.

Do you have any further questions about Skopelos churches or greek island hopping? Feel free to drop a comment in the box below.