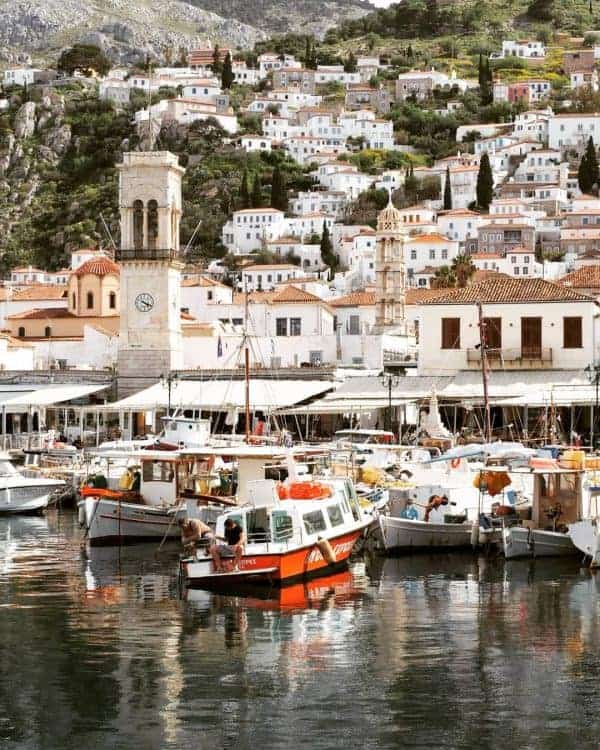 “When is the best time to visit Greece” is a question that many people ask when they plan their Hellenic adventures. As you can imagine, the best time to travel to Greece varies depending on what you want to see and do during your time here.

Assuming that you are drawing out a Greece travel itinerary that involves island hopping, relaxing on idyllic beaches, and admiring sunbleached ancient ruins in Athens, I will give you the short answer.

Generally speaking, the best time to visit Greece is either late Spring/early Summer (May and early June) or mid/late September. This is the shoulder season, and visiting during this time enables you to escape the crowds and the sky-high prices of travelling in the peak summer months.

The Best Time to Visit Greece by Season

To look a little more in detail at the best time to visit Greece, let’s have a look at what it is like travelling here by each season.

Shoulder Season (May and June)

The early summer months are the best time to visit Greece by a country mile. The lower prices and lesser crowds as compared to the peak season are kind of a given, but I personally believe that the weather at this time is much better also.

If you are planning on visiting Athens or going island hopping, you can expect temperatures of between 25 and 30 degrees Celsius during the months of May and June. This is perfect for enjoying the beaches, sailing from one off-the-beaten-path place to another, and swimming in the Cerulean waters. At the same time, it is not that hot that sightseeing or walking around for extended periods of time becomes unbearable.

From the end of April, the tourist season for the islands starts up again for the year. Hotels and local businesses open their doors for the first time of the year, and the ferries between the islands and the mainland start operating on a much more regular schedule.

I took a trip around the Saronic Gulf islands in early May and was able to book my accommodation and ferry tickets for a THIRD of the prices that the same services cost in July and August. This is not a marginal difference.

May and June do see a steady trickle of tourists visiting the mainland and the islands but this is nothing like the levels that you see in the summer. During this time, you will still enjoy little luxuries like being able to purchase boat tickets to the islands at the last minute, accessing museums and important sites without phenomenal queues, and having some of the more off-the-beaten-path destinations to yourself.

Temperatures in the northern and central regions of mainland Greece are slightly cooler, particularly in mountainous areas. If hiking is your cup of tea, the months of May and June are warm and pleasant for visiting places like Meteora monasteries and Ioannina lake.

Visiting Greece in the Summer (July and August)

Summer is the busiest period for people to travel to Greece. Proceed at your peril! Just kidding, however, I honestly wouldn’t recommend that you visit during July, August, or the first week of September.

Travel costs (flights, accommodation, ferries, tours, etc) can be as much as 60% higher during this time! Moreover, many of the budget hotels and the ferry services sell out so quickly that everything has to be booked in advance.

Do not underestimate how crowded the sights of Athens and the Greek islands get in July and August. If you are dreaming of watching a romantic, peaceful sunset over the blue-domed roofs of Santorini, think again. The popular Cycladic islands have been major victims of over-tourism in recent years. Not sure if the sunset has the same ethereal, mystical ambiance to it if you are sharing it with 34,083 people beside you.

Even getting around Greece is a nightmare during the summer. I live in Athens and will do my damndest to try not to fly in and out of Eleftherios Venizelos airport during July or August as it sometimes takes me as much as two hours to get through customs, get a metro ticket, and get out of the airport, as compared to the 30 minutes it takes me in October or something! Ugh!

Keep in mind that Greek summers are very hot and humid. Temperatures often soar to 35-40 degrees, and sometimes even higher. While hotels and Airbnbs are air-conditioned, the vast majority of restaurants, bars, and coffee shops are not. This can be very uncomfortable if you are not used to these kinds of temperatures. Walking outside or exploring cities for extended periods of time is almost unbearable.

If your schedule truly only allows you to travel to Greece during the summer months due to school holidays or something, at least try and opt to visit in July rather than August as the crowds and prices will be marginally reduced.

You can also check out “lesser-known” alternatives to popular islands – i.e places like Lefkada, Skopelos, Kythira, Syros, etc as opposed to the infamous Santorini, Corfu, and Mykonos. In general though, I’d advise you to try and avoid this period if you can.

After the first two weeks of September, the number of visitors to Greece starts to taper off. The tail-end of September and the first week of October is a pleasant time to visit Greece. Temperatures are still relatively warm (think 25-30 degrees Celsius in the day time), prices drop by up to 20%, and there is more availability at hotels and B&Bs.

In mid-October, boats between the islands and the mainland start operating on a reduced schedule. Tourism is very seasonal in Greece and outside of May-September, some of the islands essentially close down.

Outside of the islands though, Autumn is one of the best times to visit Greece, especially if you are interested in hiking and nature. The Mani and the Louisos Gorge in the Peloponnese are rewarding trails to follow. As is the Samaria Gorge in Crete, or the routes around Mount Parnitha in Athens.

Most people associate Greece with its islands and consider the country as a Mediterranean paradise: the perfect summer getaway. That said, winter in Greece also has plenty to offer, it’s just that it is a completely different style of travel.

Don’t make the mistake of thinking that Greece is one of those countries that are hot all year round – it isn’t. Winters in Athens often see temperatures that dip below 10 degrees Celsius and in Northern Greece, it is even colder. Last winter we had some of the heaviest snowfall for years!

Weather factors aside, if you are a cultural traveller that is considering a city break in Athens, or an exploration of Greece’s historical and archaeological sites, winter is a great time to travel to Greece. Winter is also one of the cheapest times to visit Greece.

During this time, you can generally find decent budget hotels in Athens, Thessaloniki, the mainland and some of the larger islands (Crete, Rhodes, etc) for as little as 25 euros per night. I have even found entire Airbnb apartments for as little as 15 euros a night! In January I spent a week in Heraklion, Crete and it cost me just £90 for an entire week! Woah!

Winter in Greece also presents the opportunity to stay in cozy log cabins in dreamy rural villages surrounded by mountains and dense woodland. Greece’s winter travel options aren’t really well-known among international tourists, but little mountain-top villages like Arachova, Zagori, and Kalavryta are perfect for skiing, walking, and generally getting back to nature.

The Cheapest Time to Visit Greece

For the islands or a hiking adventure, the best time to visit Greece on a budget is during the shoulder season (May and early June, or September). For Athens, Thessaloniki, and other city breaks head to Greece between October and March.

The Best Time to Visit Greece for the Beaches and Swimming

Late May, June, and early September are the best time to make the most of the summer sun in Greece. Temperatures are between 25 and 30 degrees Celsius on average. Water temperatures are also pretty warm.

The Best Time to Visit Greece for Hiking and Cycling

Visit between March and early June, or September to early November. During these times, temperatures are pleasant but not too hot for being outside for long periods. Accommodation and flight costs are also much lower.

Visit in the spring (March to May) or Autumn (September to early November) to enjoy days spent wandering around sun-bleached ruins in pleasant climes and sunshine. If you don’t mind a bit of dreary weather, winter is a good option if you are on a budget.

The Best Time to Visit Greece for Festivals and Events

If you are heading to Greece and are interested in tying in your travel dates with some cultural events or festivals, you may want to consider some of the below events when you plan your trip.

Carnival is the Greek answer to Halloween. Throughout February, people have costume parties all over the country. The final celebration of this period is the Patras Carnival, where thousands of Greeks take to the streets of Patras to dance, drink and sing. A procession leads through Patras’ main streets featuring giant decorated floats, coaches, and papier-mache figures.

Greece follows the Orthodox calendar and their Easter takes place at a different time to Christian/Catholic Easter. For Greeks, Orthodox Easter is even more important than Christmas! An array of events take place across the country during this time.

On Good Friday, candlelight processions march through the streets of towns and villages to commemorate the death of Christ. This is called the Epitaphios and non-Greeks are welcome to respectfully join. In Athens, there is a firework display at the top of Mount Lycabettus

May, June, and July: The Athens Epidaurus Festival

The Epidaurus Festival is a charming annual cultural event that takes place in and around Athens, as well as at the nearby Ancient Theatre of Epidaurus. Buses run frequently between central Athens and the theatre. The festival hosts a range of performances that range from ancient Greek dramas, to live jazz music, operas, and ballet dance shows.

The Thessaloniki International Film Festival takes place in the Northern Greek city every November and acts as a platform for new Film Directors to showcase their latest projects.

Athens is magical during the festive period. A grand, illuminated Christmas tree is set up in Syntagma Square, and several outdoor ice-skating rinks pop-up around the city overlooking notable attractions like the Acropolis.

Don’t worry about shop closures if you find yourself in Athens on Christmas Day. Although a lot of restaurants close, many are still open to serve travellers. A Greek souvlaki Christmas dinner might not be the usual choice but it’ll be the one that you remember!

Have any further concerns about the best time to visit Greece or travelling here in general? I have lived here for the past two years and would be happy to assist with any questions you may have. Feel free to drop me a comment below. Safe travels! Yassou! Melissa xo