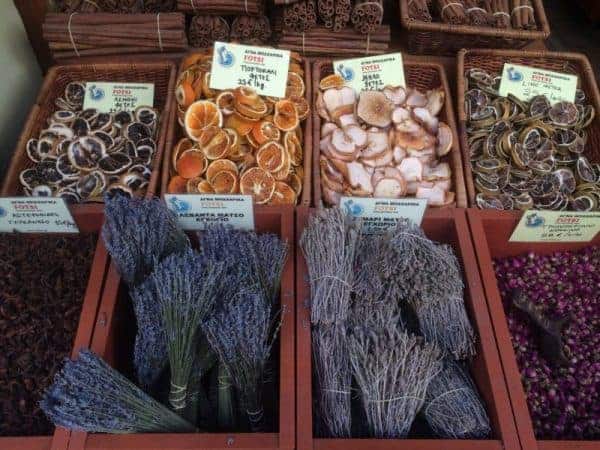 I’m going to be completely honest with you and tell you that when I first decided to move to Athens for a couple of months, I knew very little about Greek food. Sure I had tried moussaka and tzatziki but that was pretty much the extent of it. I decided that I would have to rectify this when I touched down in Greece and so I was incredibly excited to join Alternative Athens on their Athens food tour.

Starting bright and early, I met with Andreas, our Greek food guide for the day. In a city with countless options for Athens food tours, this one offered by Alternative Athens is that which shines above the rest. As recommended by the likes of leading travel media across the globe such as CNN, Lonely Planet, and National Geographic, I knew that I was going to be in safe hands with Alternative Athens. 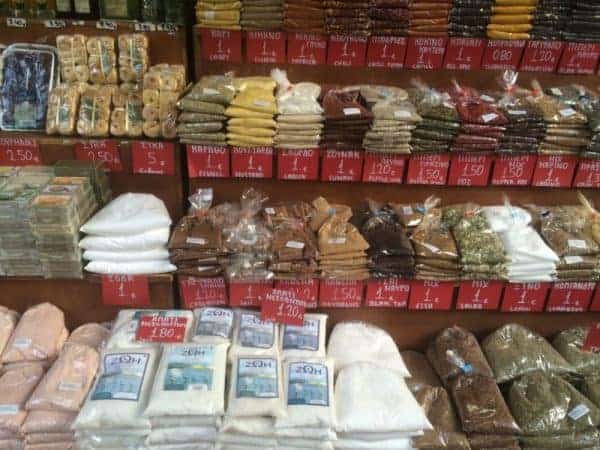 Navigating the narrow pathways that led us away from Athens central Syntagma square, Andreas started our Athens food tour by leading us to Kafenio 111, a quaint little traditional coffee store in the city’s antique district. The particular store we visited has been serving coffee to the locals for several decades, initially functioning as what was essentially a “working man’s” coffee shop for the local men to play backgammon and socialize during their free time.

Traditional Greek coffee equates to what is more widely known as “Turkish” or “Arabic” coffee – bitter, strong, and much thicker than your average cup of Joe. I am personally obsessed with this type of coffee so I was incredibly happy to see it on the Athens food tour.

With the Turks and the Ottoman empire ruling over Greece for over 400 years, the country still maintains a lot of Turkish influence in its culture and cuisine, the origins of some of these muddled in time. Greek coffee is brewed in a traditional copper biriki and usually prepared over hot coals. It is apparently possible to read your fortunes from the coffee dregs left over at the end. We couldn’t figure it out, though Andreas predicted there would be a lot of food in our future which I suppose was accurate!

The coffee was served with a side of Loukoum – the Greek answer to Turkish delight – incredibly fragrant to taste and slightly softer in texture to that of its Turkish brother.

Passing through the bustling high streets of Athens, we stopped at a street food stand to sample koulouri – traditional sesame seed bread originating from Thessalonikis in Northern Greece. This circular carby treat is the “go to” mid morning snack for Athenian locals and reminded me somewhat of a cross between a pretzel and a sesame seed bagel. Koulouri was incredibly filling so I only managed a few bites and saved the rest for later (a week on and I’m still finding sesame seeds in my handbag!) 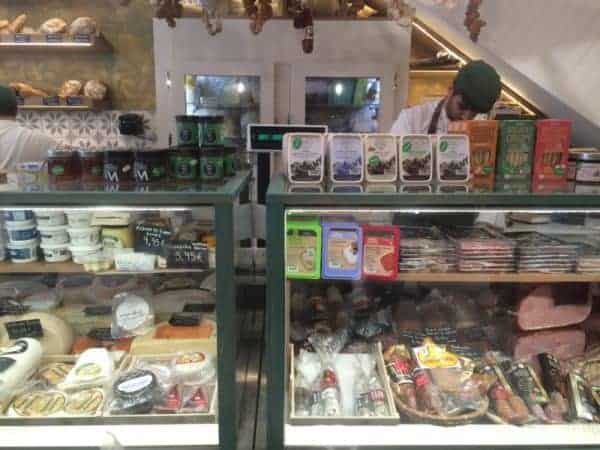 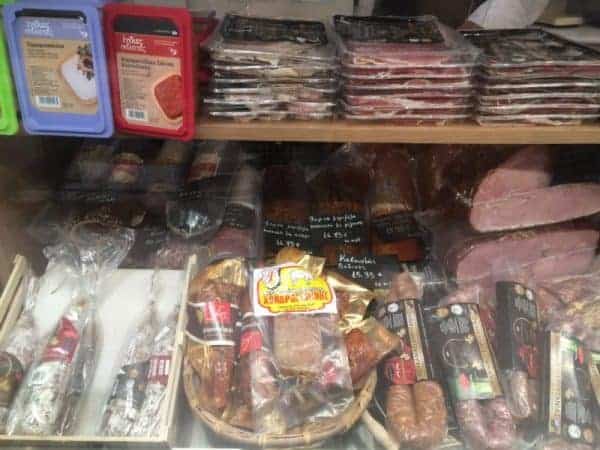 Adjacent to the fabulous flea markets of Ifestou street, we headed into Pantopoleio, an upmarket and locally adored delicatessen that sells a selection of high quality, locally sourced produce – from olive oils and balsamic vinegars to Greek cheeses, condiments and wines.

Our gourmet tasting experience was a pleasant one. We sipped wine accompanied by delectable canapes as Andreas talked us through the history of Athenian food culture. We sampled several olive oils of differing recipes created by boutique producers across the country, a fabulous balsamic vinegar made from sour cherries, and a selection of rich feta cheeses drizzled in olive oil and garnished with oregano. The condiments were perhaps a highlight for me though – Also presented at the table were a rich olive paste, and a paste comprised of Santorini’s best sun dried tomatoes. I think you should eat these paired with bread or crackers, but I personally could happily sit and eat them straight from the jar with a spoon! (Don’t judge…) 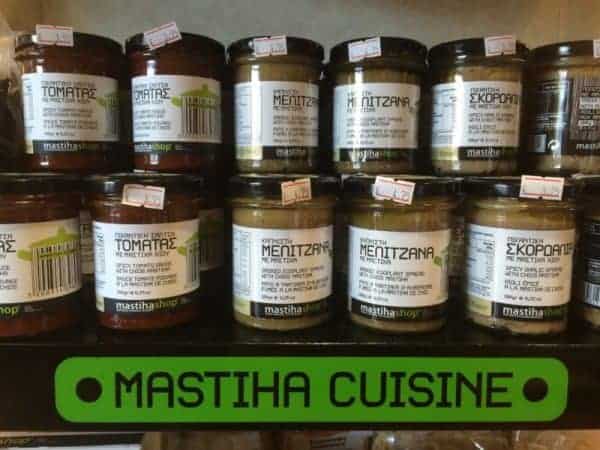 Andreas led us to a store that was dedicated to the production of “mastic”, a resin sourced from the mastic tree. It is used in cooking and for the recipes of traditional foods like loukum but historically, mastic was enjoyed as a chewing gum in Syria, Lebanon, Turkey and Greece. Flavorless at first, after some chewing the mastic revealed a somewhat pine tree meets soil taste (Not that I have tried said combination!) It wasn’t really my cup of tea but it’s a time old delicacy so who knows? You may fall in love with it! 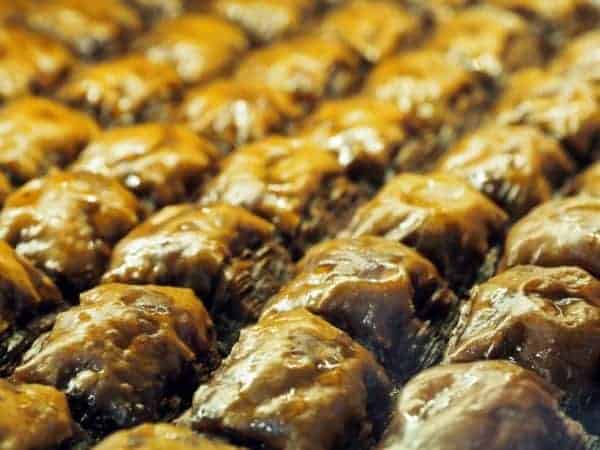 Down an unsuspecting alleyway, inside a quaint little bakery were rows and rows of hand prepared baklava and a seemingly infinite number of varieties. I wanted to try them all but had to try and feign having at least some self control! If you’re unfamiliar, baklava is a sweet sticky pastry dessert that is popular in Arabic (and Greek!) cuisine and made from paper thin pastry soaked in honey and sprinkled with finely chopped nuts.

Have you ever tried fresh homemade baklava? I’m head over heels in love with it and have bought boxes of the treat during my trips to Turkey and Israel. When I bought them, I had every intention of giving them away to other people as gifts, but then ended up eating them all myself – oops! 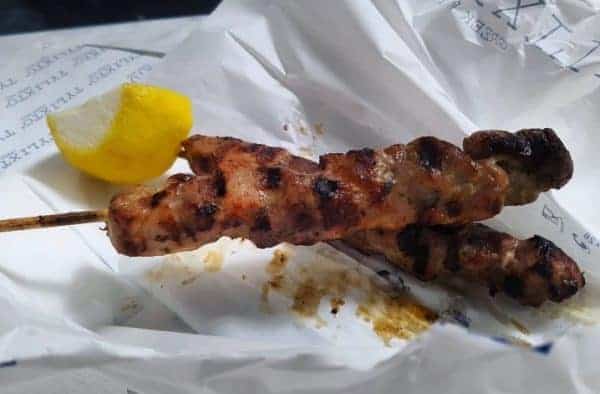 This was where the real eating on our Athens food tour began (so glad that I skipped breakfast!). Back on one of Athens main high streets, we found ourselves outside the entrance of an inconspicuous looking food place – apparently rumoured to sell the best souvlaki in town. No frills, and no fuss, the store was a simple take out style eatery with plastic outdoor seating.

After an anticipated wait (there is always a queue here for a bite of the best souvlaki in Athens!), I eagerly accepted my souvlaki. Souvlaki is simply skewered meat (though sometimes it is also served with vegetables) and in Greece, this is typically pork. Don’t get it muddled with your typical western style kebab though, souvlaki is of a much higher quality. I was handed a warm pita bread to enjoy in accompaniment to my souvlaki and a lemon to squeeze for taste (which I of course managed to squeeze all over myself!) By this point, my food baby made me look as though I was deep into my second trimester, but with three stops to go, I powered through in the name of greedy women everywhere! 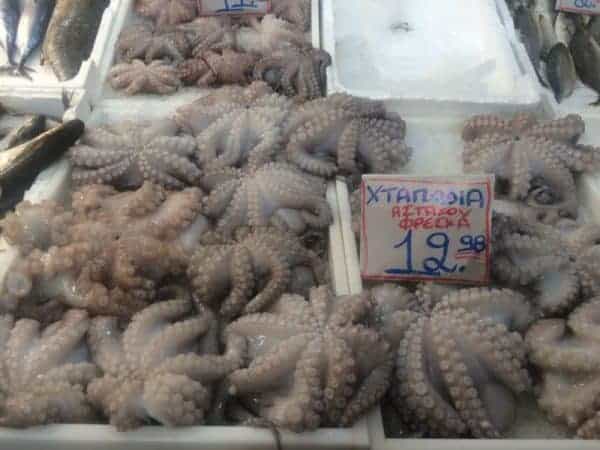 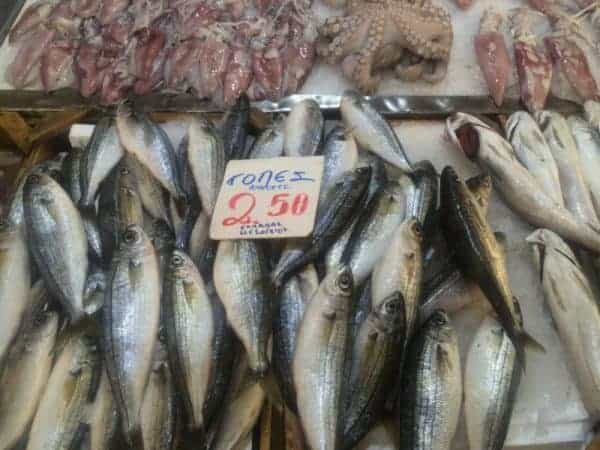 It’s wet, it’s smelly, and there’s definite splash back potential. Athens central markets (Varvakios Agora) are the perfect example of traditional food markets that have preserved their identity with the test of time. The markets were historically considered the best place to procure fresh cuts of meat, spices, vegetables and seafood and indeed, the atmosphere is still bustling today with vendors yelling out their competing prices, and locals haggling to negotiate the best deal on the ingredients for their Greek Sunday dinners. 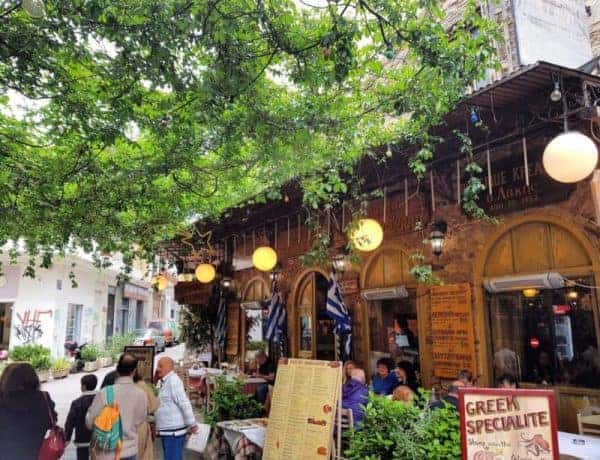 One thing that many people do not realise when visiting Athens is that the city is a cultural melting pot, home to a diverse mix of people who have immigrated from various neighbouring countries over the past century. Our Athens food tour led us along the fragrant Evripidou street – a street packed with Armenian and Middle Eastern stores selling spices, cured meats, and other culinary products. We made our way to the busy Psiri district and ventured inside a typical Greek taverna where we were served a number of Greek dishes to sample.

An old favourite – Moussaka, was obviously on the table as was tzatziki with a side of freshly baked bread. Briam (Greek mixed vegetables) and fava (yellow split pea puree made with Santorini fava beans seasoned with lemon juice) also made an appearance.

Adjacent to our quaint taverna, we ducked into our final stop on our Athens food tour – a Greek bakery adored locally for its bougatsa – a sweet filo pastry dish stuffed with custard. The process for making this dish was fascinating in itself and it was interesting to watch as the chefs swung the pastry wildly around their heads. Alternative Athens kindly provide you with the recipes for everything that you sampled after the tour, but I’m not sure that I have the skills to making bougatsa by myself!

After enjoying our warm bougatsa, we headed back to Monastiraki station where we said our goodbyes. As you can see, there are a lot of stops and plenty of opportunities to sample local foods on this tour so it is definitely value for money. The Athens food tours offered by Alternative Athens are led by local people so you are assured that you are getting an expert insight into the local food culture.

Disclaimer: High Heels & a Backpack was a guest of Alternative Athens on this tour. That said, all opinions are my own and I can safely say that even though I have taken a lot of food tours across the globe, this Athens food tour was one of the best.