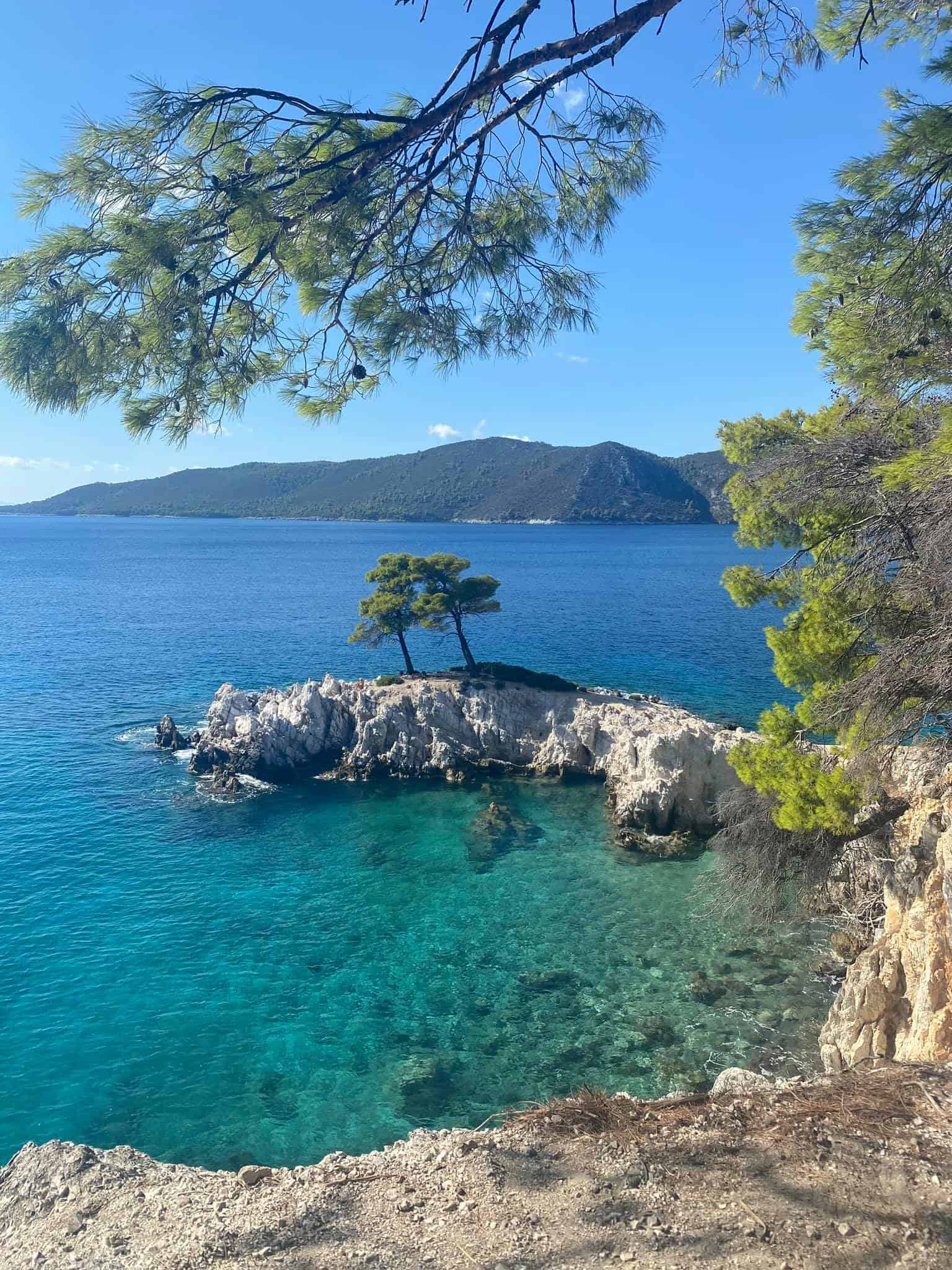 Reading poetic quotes about Greece is a nice way to get yourself in the mood for your trip – regardless of whether your Greek vacation is all booked and you are counting down the days, or you just have an idea in your mind that you would like to make it to this Mediterranean paradise someday.

This post provides a collection of beautiful quotes about this idyllic Mediterranean country. Here, you will find an assortment of reflections from Writers, Poets, and Creatives that have fallen in love with Greece and drawn inspiration from her shores, in addition to quotes from Greek Philosophers and Academics.

Quotes About the Beauty of Greece

With its idyllic island archipelagos that are surrounded by crystal-clear Cerulean waters, Greece is arguably one of the most beautiful countries in the world. It is no surprise that more than 22 million people visit Greece each year and the vast majority of those that visit fall madly in love with the Greek country and culture.

“The sea was sapphire coloured, and the sky burned like a heated opal through the air; We hoisted sail; the wind was blowing fair. For the blue lands that to the eastward lie.”

“It takes a lifetime for someone to discover Greece, but it only takes an instance to fall in love with her.”

“Greece was a muse. It inspired creativity in magical ways that I can’t even begin to understand or explain.”

“Happy is the man, I thought, who, before dying, has the good fortune to sail the Aegean sea.”

“Unless you have seen the houses of Mykonos, you can’t pretend to be an architect. Whatever architecture has to say, it is said here.”

“On a summer night, I have sat on the balcony drinking Ouzo, watching the ghosts of Greek Heroes sailing past, listening to the rustle of their sail cloths and the gentle lapping of their oars.”

“My childhood in Corfu shaped my life. If I had the craft of Merlin, I would give every child the gift of my childhood.”

“When you set out on your journey to Ithaca, pray that the road is long, full of adventure, full of knowledge…. Ithaca has given you the beautiful voyage. Without her, you would have never set out on the road. She has nothing more to give you.”

“The only sounds: -when ‘gan the West to burn, and a red sun upon the seas to ride, I stood upon the soil of Greece at last!”

“The beauty in front of her interrupted her thoughts. She took a deep breath, staring at the shores of Mykonos with the scenic coves and the golden sand beaches.”

“Gradually the magic of the island (Corfu) settled over us as gently and clingingly as pollen.”

“The place enchanted me.”

“The Greek Isles present a collage of diverse landscapes and customs. Mykonos is fun-loving, with lively tavernas and populated beaches. Delos is stoic, protecting the ruins of its ancient sanctuaries in solemn dignity. Milos is magical, with its volcanic rock formations and stunning village vistas.”

Quotes About Falling in Love with Greece

Greece has a little something for everyone. Those who love the rugged wilderness of the mountains and the great outdoors will fall in love with Karpenisi, Central Greece, the Peloponesse, and the North of Greece.

Meanwhile,those that enjoy quaint villages and pristine coastlines will be captivated by the Cyclades and the islands of the Saronic. Greece has many faces and it will take a lifetime to discover them all.

“The light of Greece opened my eyes, penetrated my pores, expanded my whole being”

“In every island of the Aegean Sea are found abundant traces of a vast prehistoric empire.”

“Of all the peoples, the Greeks have dreamt the dream of life best”

“Greece is a good place for rebirths”

“Greece is the most magical place on earth”

“Greece: The feeling of being lost in time and geography with months and years hazily sparkling ahead in a prospect of inconjecturable magic”

“Greece is the home of the Gods. They may have died but their presence still makes itself felt.”

“Greece is a good place to look at the moon isn’t it?”

“If I was born in Ancient Greece, I’d worship Zeus and Aphrodite”

“Greece gave democracy to the rest of the world”

“The problem with Greece is that she’s just too beautiful”

“There are men whose manners have the same essential splendor as the simple and awful sculpture on the friezes of the Parthenon, and the remains of the earliest Greek art.”

“I like reading, free diving, and hiking. But my favorite thing to do is travel anywhere in Greece. I love everything about that place.”

“If you deconstruct Greece, you will, in the end, see an olive tree, a grapevine, and a boat remain. That is, with as much, you reconstruct her.”

“Santorini’s boutique hotels and fine dining make it one of the classier Greek islands, but this is balanced by the down-to-earth hospitality and tradition for which Greece is renowned.”

With its sunbleached ruins and ancient neighbourhoods that date back thousands of years, the Greek capital of Athens is a great starting point for an adventure through Greece. I have lived here for the last two years and have truly loved exploring every corner of this historic city.

“Maid of Athens, ere we part. Give, oh give me back my heart!”

“Athens – The eye of Greece, the mother of arts and eloquence”

“Let there be light! Said Liberty, And like sunrise from the sea, Athens arose!”

“I want to see the Parthenon by moonlight.”

“We approached Athens from the north in early twilight, climbing a hill. When we reached its peak, we were dazzled to look down and see the Acropolis struck by one beam of the setting sun, as if posing for a picture.”

“An Aristotle was but the rubbish of an Adam, and Athens but the rudiments of Paradise”

“A great city, whose image dwells in the memory of man, is the type of some great idea. Rome represents conquest; Faith hovers over the towers of Jerusalem; and Athens embodies the pre-eminent quality of the antique world, Art.”

“Athens built the Acropolis. Corinth was a commercial city, interested in purely materialistic things. Today we admire Athens, visit it, preserve the old temples, yet we hardly ever set foot in Corinth.”

“My sisters and I were fortunate to travel through Asia and Europe at very young ages. We confronted extraordinary beauty in Athens and unspeakable poverty in India.”

“We have the ability to be the Athens of modern times as opposed to the militaristic Spata. I remind you that the Athenians wrote poetry. The Spartans did not.”

“Athens – a city which is very great and very famous for its wisdom and power. Are you not ashamed of caring so much for the making of money and for fame and prestige, when you neither think nor care about wisdom and truth and the improvement of your soul?”

If you can say anything about the Greeks, it’s that they are a nation of proud people with a strong cultural heritage. The Greeks are world-renowned for their warmth and hospitality, along with their laid-back approach to life.

Weekends and evenings in Greece are spent sitting al fresco outside the local tavernas surrounded by good friends with a glass of ouzo in hand. Life here is about the simple things and really living in the moment. The quotes about Greece below really embody that aspect of local life.

“I want to have an ‘Eat, Pray, Love’ experience where I drop off the face of the planet and move to Greece.”

“I felt once more how simple and frugal a thing is happiness: a glass of wine, a roast chestnut, a wretched little brazier, the sound of the sea. Nothing else.”

“We are all Greeks. Our laws, our literature, our religion, our arts have their root in Greece.”

“Alcohol makes other people less tedious, and food less bland, and can help provide what the Greeks called entheos, or the slight buzz of inspiration when reading or writing.”

“In many ways, we are all sons and daughters of ancient Greece.”

“How can any educated person stay away from the Greeks? I have always been far more interested in them than in science.”

“If you go back to the Greeks and Romans – they talk about all three – wine, food, and art – as a way of enhancing life.”

“The people of Crete, unfortunately, make more history than they can consume locally. “

“The Greeks had invented democracy, built the Acropolis, and called it a day. “

“I’m obsessed with Greek mythology. My favorite goddess is Artemis. She’s strong and reminds me of Katniss, the heroine of ‘The Hunger Games.’”

“There are two kinds of people: Greeks, and everybody else who wish they were Greek”

“Give me a word, any word, and I’ll show you that the root of that word is Greek”

“The ancient Greek definition of happiness was the full use of your powers along lines of excellence.”

“I hope nothing, I fear nothing. I am free”

Indulging in the local delicacies is a highlight of spending time in Greece. The national cuisine can be characterised by sumptuous marinated meat dishes that are slow-cooked to perfection, delightful flaky pastries, indulgent street food, and beautiful salads prepared with fresh local produce.

“Part of why I love Greek food so much is that it is simple, but it’s unpretentious. It’s authentic.”

Princess Tatiana of Greece and Denmark

“I open it, feel the rush of steam leaving the bag and smell the unmistakable aroma of Corfu….Loukoumades. Drizzled with honey and dusted with a flourish of cinnamon. Sugared perfection in the form of golf-ball-sized fried dough.”

“Let food be thy medicine & medicine be thy food.”

The wise reflections of ancient Greek Philosophers are synonymous with the mention of Ancient Greece. It’s hard to think about Athens without imagining the likes of Socrates, Plato and Aristotle sipping wine and engaging in intellectual conversations with their peers beneath the shadow of the Acropolis.

The Greece quotes in this section are not restricted to quotes about Greece, but thought-provoking quotes from Greek Philosophers that we can use to enrich our lives.

“According to Greek mythology, humans were originally created with four arms, four legs, and a head with two faces. Fearing their power, Zeus split them into two separate parts, condemning them to spend their lives in search of their other halves”

“There was never a genius without a tincture of madness”

“Employ your time in improving yourself by other men’s writings so that you shall come easily by what others have labored hard for.”

“To find yourself, think for yourself”

“Nothing exists except atoms and empty space; everything else is opinion“

“There is nothing permanent except change”

“We are what we repeatedly do. Excellence, then, is not an act, but a habit”

Have any more quotes about Greece that you’d like to share? Alternatively, feel free to reach out to me if you need any advice for planning a trip to Greece.

I have spent the last two years living in Athens and this site is filled with comprehensive guides to help you plan your trip. Safe travels. Geia sou! Melissa xo