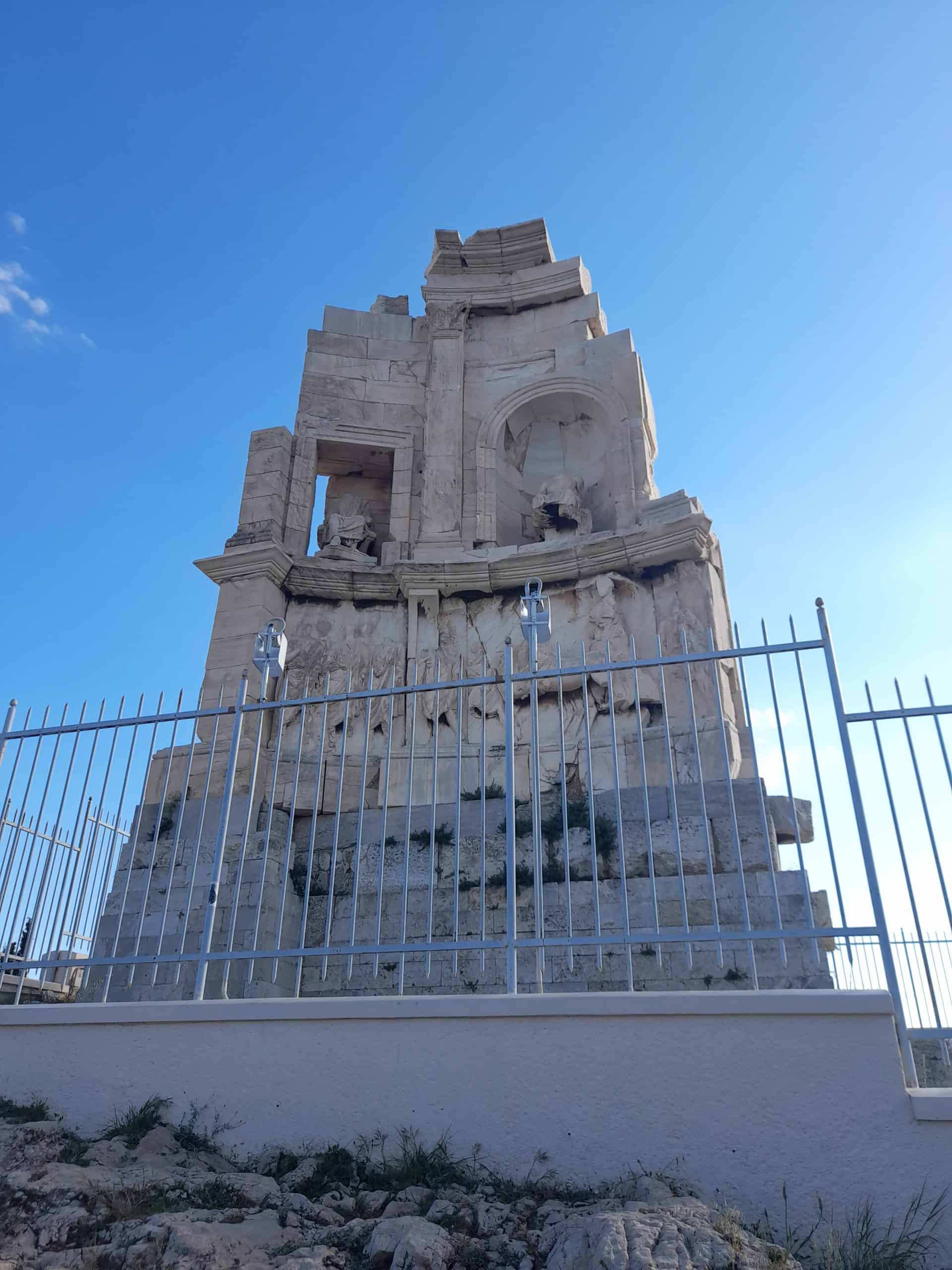 Athens is a hilly city. Its up and down landscapes can be exhausting to navigate on foot.

Some residential neighbourhoods just outside of the city centre such as Pagrati, Vyronas, and Kaisariani feel reminiscent of San Francisco because some of the hills are so steep! (Slight exaggeration perhaps but it is very hilly nonetheless!)

There are seven major hills of Athens. These gorgeous, leafy spots provide a much needed oasis in the midst of a concrete jungle.

Each one has its own fascinating links with Greek history and mythology. They are very deserving of your time and attention during your Athens itinerary.

The 8 Major Hills of Athens

Filopappou Hill takes its name from the Filopappou monument situated at its peak – an impressive carved stone structure dedicated to the Roman Commander Julius Antiochus Filopappos.

Commander Filopappos was one of the most prominent Greeks to ever exist within the Roman Empire. After his passing, in 115BC, construction of the Filopappou monument was ordered. Filopappou himself was buried in a tomb within the hill.

The walk to the peak is pleasant and manageable for people of all ages and hiking abilities. A paved path leads you straight to the top from Filopappou’s entrance on Dionysiou Areopagitou.

Several other paths and trails veer off from the main route, however. These are all equally worthy of exploration. One detour leads you to the hill of Pnyx, another to Socates’ prison, and another to the open air theatre of Dora Stratou where cultural performances and plays are often hosted during the summer months.

When you enter the Filopappou site, look out for the little wooden church on your right. This is the 12th-century church of Agios Demetrios Loumbardiaris.

It may not be the oldest, but it is certainly one of the most charming churches in Athens. The church has been created in a unique style. Its courtyard is laden with bells hanging from trees and wooden gates in a manner more reminiscent of rural Japan than it is metropolitan Greece.

The Acropolis Hill is of course, one of the most famous landmarks in Athens. The exquisite marble Parthenon is the site’s piece de resistance. It sits atop the craggy bluff of the hill, watching over the city protectively.

Acropolis Hill has been occupied since the fourth millennium BC. At one point in time, virtually every Greek city of importance had an Acropolis site.

While those in other cities existed primarily for defensive purposes, the Athens Acropolis’ function was strictly religious. The Acropolis, and the Parthenon are dedicated to the worship of the Goddess Athena.

As you make your ascent to the top of the hill, you will pass by several other notable historical sites. The Parthenon may get all of the limelight. However many of the other ancient structures here are just as interesting.

Notably, the Odeon of Herodes Atticus (161AD) is one of the “newer” constructions in the area. The Roman Emperor built it in dedication to his wife. The nearby Theatre of Dionysus was a spectacular 17,000 seater theatre named after Dionysus, God of Drama.

Ardittos Hill sits adjacent to the spectacular marble Panathenaic Stadium. It is sandwiched between the districts of the Mets and Pangrati.

The hill received its name from Ardettus, an ancient Athenian whose role was to resolve and mediate disputes between Athens residents. The route to the top of Ardittos takes you along well-paved footpaths and through sections of lush green woodland.

From the top, you can enjoy a unique viewpoint of Athens. You have an almost birdseye view of the Panathenaic stadium beneath you, and a view out to central Athens and Lycabettus in the distance.

When your hike is through, head to one of the quirky local coffee shops in the Mets for a cappuccino and a slice of cake. Kain (Anapafseos 22) and Metz coffee (Mark. Mousourou 63) are local favourites.

It is a well known fact that Athens was the birthplace of democracy. However, a common misconception is that the place of its creation was the Acropolis. Instead, it is the lesser-known Pnyx Hill that is considered by many as democracy’s birthplace.

It was here where renowned Greek orators such as Demosthenes would give speeches on civic issues. The assembly would meet here at least ten times a year to discuss, debate, and cast votes on issues such as building developments around the city, new legislature, and wars.

You can access Pnyx Hill from within the Filopappou Hill park area. Simply take a right turn from the main path when you see a signpost for “Pnyx”.

There is little to see at the Pnyx Hill by way of ruins. A few sunbleached stones mark what remains of the “Diateichisma” – a 4th century fortification wall. You can also see the remains of the ‘bema’ – the podium where the orators would stand.

So why travel to Pnyx hill? The Pnyx has some of the best views of the Acropolis that you can enjoy in Athens. This craggy bluff is situated directly opposite the parthenon and it is pleasant to sit here among the olive trees with a picnic admiring the view.

Areopagus Hill is a rocky bluff in Thissio that awaits on the popular pedestrianised street of Apostolou Pavlou. Today, the footpaths that lead through the trees around the circumference of the site are popular among dog walkers, or young Athenians sipping takeout coffee with their friends on their lunch breaks.

However, during the Classical Age, this was a place of significant importance. The hilltop acted as the high court of appeal in Athens and many cases were tried here.

Today, unfortunately nothing remains to indicate the hill’s past as a high court bar a few carvings on the rocks. The main draw of coming here is for the views over the Acropolis and the Ancient Agora.

It should be noted that it is a little tricky to get to the top as there is no set path and you have to clamber over some stones. Some of the rocks have become slippery after being weathered by time so be sure to wear appropriate footwear with a good grip.

Mount Lycabettus is one of the most touristic hills of Athens. The quaint little whitewashed church of Agios Georgios awaits at the top, as does an upscale restaurant and coffee shop with some of the best views in the city.

Lycabettus is often referred to as “Mount Lycabettus” which is misleading. This is not a mountain afterall, but a Cretaceous limestone hill that sits 300 metres above sea level.

The hill is the highest of the seven hills in Athens. On a clear day, you can see all the way out to Piraeus and the Saronic Gulf from its peak.

Today, Lycabettus hill is filled with dense pine trees and fragrant flower gardens. The ascent to the top isn’t overly challenging. However it can be a little gruelling in the Greek summer heat.

If you are not travelling out of season, try to arrive at Lycabettus in the morning or just before sunset. At this time, the view is particularly special. You can witness Athens at golden hour before the city is gradually illuminated by thousands of twinkling lights.

If you do not wish to walk, rest assured, there is a funicular train that runs to the top. This can be found on Aristippou street, in upscale Kolonaki.

The Hill of the Nymphs

The Hill of the Nymphs is one of the smallest of the hills of Athens. It is just 100m in height and is connected to Filopappos Hill and the Pnyx by a walking path.

It can be difficult to see precisely where the Filopappos site ends and where the hill of the Nymphs begins. The hill is seldom crowded and is characterised by lush greenery and dense woodland. Here, you forget you are in the midst of one of Europe’s largest cities!

Athenians mostly come here for exercise. Yet like its neighbour hills, the Hill of the Nymphs also provides spectacular city panoramas and viewpoints.

The National Observatory of Athens can be found here. From here you can gaze up at the night sky via a  Doridis telescope – something that is particularly impressive on a clear summer’s night.

Tourkovounia is a hill in one of the northern neighbourhoods of Athens. It is situated in Nea Ionia and to be frank, you are not likely to visit here unless you are staying in the area.

However, that is not to say that Tourkovounia is not worthy of your time, if your schedule permits. Like the other hills of Athens, there are breathtaking views to be enjoyed at its peak. From way out here in the northern suburbs, you get a feel for just how expansive and sprawling the Greek capital really is.

Tourkovounia is more of a “local” place where residents of the nearby neighbourhoods come to walk or jog. There is an excellent coffee shop here, an outdoor cinema that opens in the summer, and a children’s playground.

Do you have any additional thoughts or queries about planning your trip to Greece? I have lived here since 2017. Please don’t hesitate to reach out to me if you need anything.

1 thought on “Hills of Athens: 8 Places to Escape to Nature in the City”