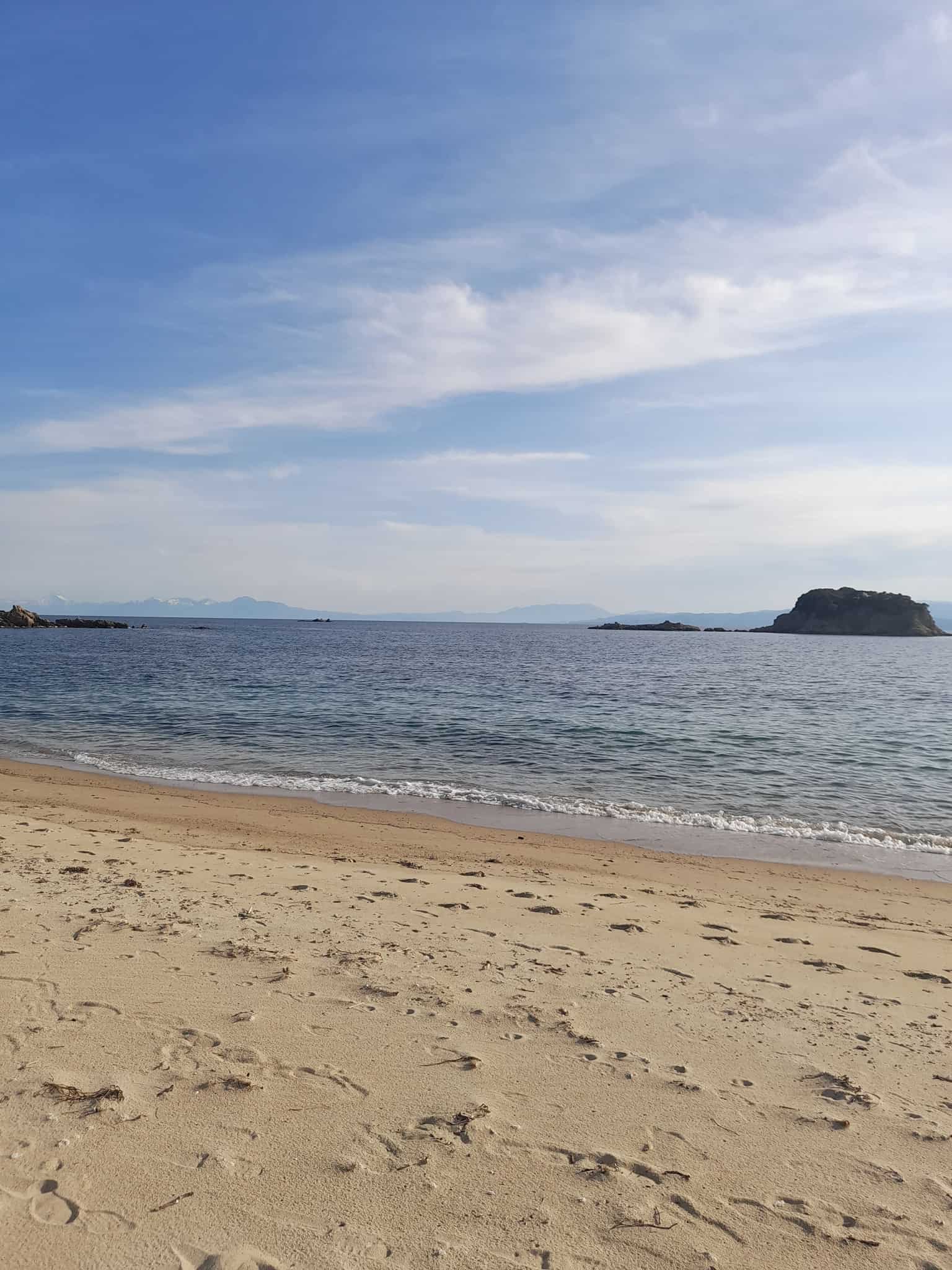 The Skiathos bus makes travelling around the beautiful leafy island of Skiathos incredibly easy. Its route runs along the length of the main ring road and stops at all of the main Skiathos beaches and resorts along the way.

The Skiathos bus is a convenient way to travel around the island. It connects Skiathos town in the east with Koukounaries in the west.

The majority of the island´s points of interest can be found along this route. As such, it is very easy to get from A to B without having to rent a car.

This is much different to neighbouring Skopelos island where even the most notable attractions such as the Mamma Mia church cannot be reached without having your own transport. It should be noted, however, that the northern part of Skiathos is not serviced by this bus route.

As such, you will need to either rent a car, get a cab, or hike to areas like Kastro and Ligaries beach. Some of the roads on the islands north side are more like narrow dirt trails, so taking a small car is preferable here.

The main stop, however, sits to the left of the port area just before the seaside road continues towards the airport. It is just 200m from bourtzi and can be easily identified by the little wooden roofed bus stop.

Look out for the white and green Speedex courier sign. The main bus stop is just opposite this.

There are three more stops between the town and Megali Ammos beach. The bus runs all year round and is used by island residents and tourists alike.

During the peak summer months, the buses run every fifteen minutes. Out of season (From October to May), buses run approximately four times a day in each direction.

The Skiathos bus is managed by KTEL Greece. This is the umbrella company for all public buses in Greece. The buses are white and green and impossible to miss.

You cannot purchase return tickets so as such, you will need to buy two individual tickets. Public transport in Greece is typically very convenient and reliable. The Skiathos bus is no different.

You will seldom find that the bus is running behind schedule. However, it does get very busy in the summer months and some passengers may have to stand if travelling at certain times when it is crowded.

You will see ¨Skiathos¨ and ¨Koukounaries¨ written in Greek on the front of the buses (Σκιάθος and Κουκουναριές). It should be noted that the buses do not have a way of notifying you of the stops, so you should keep an eye out and look out the window for your destination.

The Skiathos bus route is detailed below. Note that locals often refer to the stops by their numbers rather than their names.

If you develop a favourite place on the island, you will get used to this after a while. Each of the stops has a large sign with its number displayed clearly.

Most of the stops have a paper timetable affixed to them. This is subject to change depending on the season. The current stopping routes are:

It should be noted that beside the main Skiathos bus, there are also two minibuses on the island that take you from the town to Evagelistrias Monastery and Xanemos beach respectively. Both of these places are beautiful spots that you may wish to consider during your Greek island hopping adventure.

The Evagelistrias bus is known as the Skiathos green line minibus, and the Xanemos beach bus is the blue line minibus. These buses run on less frequent schedules than the major island bus, leaving just a couple of times per day.

Do you need help planning a holiday to Greece? Alternatively, do you have more questions about the Skiathos bus?

You are welcome to reach out to me if you need something. I have lived in Greece since 2017 and based myself in the Sporades for eight months in 2020/21.

1 thought on “The Skiathos Bus & How to Use it: Getting Around Skiathos in 2022”