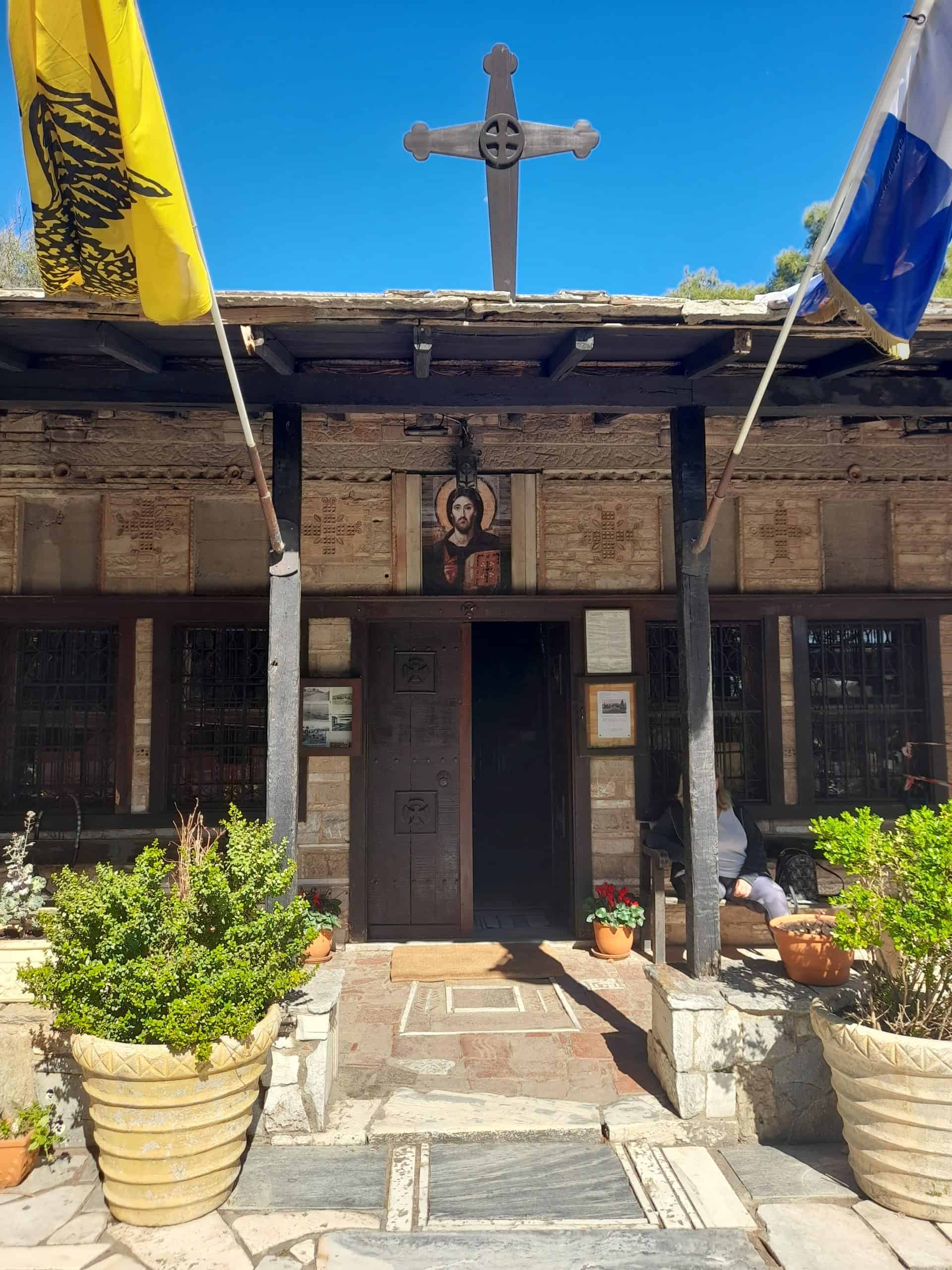 Filopappou Hill Athens is a green oasis in the heart of a concrete jungle. This central Athens park is known for its namesake Philopappos Monument.

The glittering marble monument atop the hill was dedicated to Roman Commander Julius Antiochus Filopappos. However, Filopappou is much more than that.

The hill is also sometimes referred to as “The Hill of Muses”. It stretches out across several miles, and includes Pnyx hill and the hill of the Nymphs within its grasps. From here, it is easy to forget that you are in the centre of one of Europe’s most chaotic cities.

Filopappou Hill, Athens is a lovely place to spend an afternoon if your Athens itinerary permits. The main entrance is found on the charming cobbled boulevard of Apostolou Pavlou between Thissio and upscale Makrygianni.

The wild, pine-shaded spot is a perfect place for an afternoon walk, shaded from the hot, Mediterranean sun beneath the trees. Filopappou attracts a lot of hikers, along with local Athenians meeting for al fresco coffees on their lunch breaks.

There is an uphill marble pathway that weaves through the site leading you to the peak and the Philopappos Monument. This was constructed by architect Dimitris Pikionis in the 1950s.

The route isn’t particularly difficult or steep. It is well paved and easy to follow for walkers of all ages and fitness levels.

Several routes veer off from the main pathway and are well worth exploring. They reveal a number of interesting attractions, including Socrates’ prison, Pnyx, and the quaint wooden church of Agios Dimitrios Loumbardiaris.

Socrates Prison is a carved cave complex in the foothills of Filopappou Hill Athens. For a period, it was believed that it was here where the Ancient Greek Philosopher Socrates was tortured and ultimately killed.

It was later discovered that this was not the case at all. However, the cave has still played an interesting role in Greek history.

It was here where the Greeks hid their sculptures and antiques from the Acropolis during the German occupation of Greece during World War II, Nobody is certain of the exact original purpose of the complex.

The Church of Agios Dimitrios Loumbardiaris

The church of Agios Dimitrios Loumbardiaris (Saint Demetrius the Bombardier) is not one of the oldest churches in Athens, nor one of the most aesthetic. However it is charming and interesting in appearance.

You will find the serene woodland church on the right hand side of the main promenade when you enter the Filopappou site. The stone church dates back to the ninth century. Like other notable Athenian churches, it was constructed using the remains of churches in the area that were previously destroyed.

The exterior courtyard is particularly unique. It feels more like something that you would expect to see in Kyoto than in the Mediterranean.

Agios Dimitrios Loumbardiaris´ courtyard boasts wooden gates and bells hanging from trees. The gorgeous, vibrant frescoes inside the church date back to the 18th century. One notable image is the 1732 fresco of St Dimitrios riding his horse.

There are actually three Athenian hills set within the Filopappou park area: The hill of Pnyx, the hill of nymphs, and Filopappou hill. Pnyx was the birthplace of democracy.

It was here where the Athenian democratic assembly (ekklesia) would meet, and where famous Ancient Greek orators such as Demosthenes, Perikles, Aeshines, and Themistocles would give speeches. Assemblies gathered here from the 6th to the 4th century BC.

The word ¨Pnyx” means  ¨place where people are closely packed together¨. This open air chamber could hold 10,000 people.

Only a few crumbling walls, the remnants of an old podium, and a few inscribed boundary markers remain here today. The Pnyx was abandoned in the 4th century. At this time, the assemblies were moved to the nearby Theatre of Dionysus.

Today, the rocky hill of the Pnyx is a magnificent place to sit, enjoy the city views, and look out to the Acropolis. Arguably the Acropolis views are better from here than at Filopappou peak. The Pnyx sits directly opposite Acropolis hill and the Parthenon is so close from here that it almost feels as though you can reach out and touch it.

The Hill of Nymphs

The second of the three hills that make up the Filopappou site is the hill of Nymphs. This small leafy area is only 105 metres in height.

It is essentially a forest of olive and pine trees and is a popular spot for local walkers. The hill is a great place to wander, reflect, and have time alone with your thoughts.

This area is dominated by the National Observatory of Athens which was built by Theophile Hansen and founded in 1842. It was the very first modern research facility in Greece.

The views from the Hill of Nymphs are beautiful, but perhaps not quite as impressive as those enjoyed at the nearby Pnyx hill or Filopappou Hill. If you are interested, it is possible to organise an evening tour at the National Observatory and gaze up at the night sky through a telescope.

The Philopappos Monument is the impressive carved structure that sits at the top of Filopappou Hill, Athens. It is made of pentelic marble, and can be seen from around the city.

The monument is illuminated at night and provides a magical contribution to the Athens skyline. This is much like its neighbouring Lycabettus hill with its resident whitewashed church, and the nearby Acropolis.

The monument was dedicated to the Roman Commander Julius Antiochus Filopappos. Filopappos was one of the most prominent Greeks to ever exist within the Roman Empire.

His mourning family ordered the construction of the monument in 115BC. Filopappos himself was buried in a sealed tomb behind the monument.

The top middle niche depicts Filopappos enthroned. Although now sadly he has lost his head. Carvings of his chariot and entourage are depicted below.

Unfortunately, the monument has suffered a lot of vandalism over the centuries. Many of its initial inscriptions no longer remain. It was partially restored by the engineer N. Balanos in 1904.

The main draw of climbing up to the Philopappos Monument is the panoramic views of Athens from this point. On a clear day, you can see all the way out to Piraeus, and the Saronic Islands of Salamina, Hydra, etc.

The theatre of Doras Stratou can be found in the centre of the Filopappou Hill Athens site, on the slopes of the Hill of Nymphs. The theatre actually acts as a living museum, and a unique one at that. It is the living museum of Greek dances.

During the summer months, the 860-seat garden theatre offers traditional performances. Dances are performed to showcase traditions from various regions of Greece – from Epirus to Karpenisi, Evritania.

The ¨Deaf Manś Cave¨ is an elaborate rock-cut structure that was only recently excavated in 2009. Thus hinting at the exciting promise of potentially more treasures and historical sites lurking beneath the surface of the Filopappou site.

The cave complex is made up of two chambers. It is believed that they were originally used as places of worship, then as homes, and later as tombs and burial monuments. The obscure name ¨deaf man’s cave¨ hints at a local legend that the man who resided in this particular stone-cut house was deaf.

The little church of Agia Sotira sits on the outskirts of the Filopappou Hill Athens site. It is a distinctly unique looking church that almost doesn’t look like a religious structure at all.

It sits at Lakiou 8, in the shadows of the Philopappos Monument. The little ceramic red roofed building is not a tourist attraction. But it provides an interesting glimpse into life in Athens. Baptisms and other ceremonies are often hosted here.

Filopappou Hill is always open. However it is highly recommended that you visit during the daylight hours.

Unfortunately, there have been a number of muggings and other petty crimes in the area in recent years after sunset. That doesn’t mean that Athens or Filopappou Hill are not safe. Simply, you need to use common sense and be careful at any isolated park space in any major city.

There are presently no coffee shops or refreshment stands within the Filopappou Hill Athens site. However, there is a small kiosk at the site entrance on Apostolou Pavlou which sells cold beverages and small snacks.

You can explore the entire site in a little over an hour. Pack plenty of water, sunscreen, and a sun hat if you are visiting during the summer months. In some areas, such as Pnyx, there is no shade from the sun.

There are a few entrances to the site – in nearby Koukaki, Petralona, and Thissio. The main entrance is at Apostolou Pavlou.

Have any questions about organising your trip to Greece? Please don’t hesitate to reach out to me.

I have lived here since 2017. I am happy to assist with any questions that you may have.