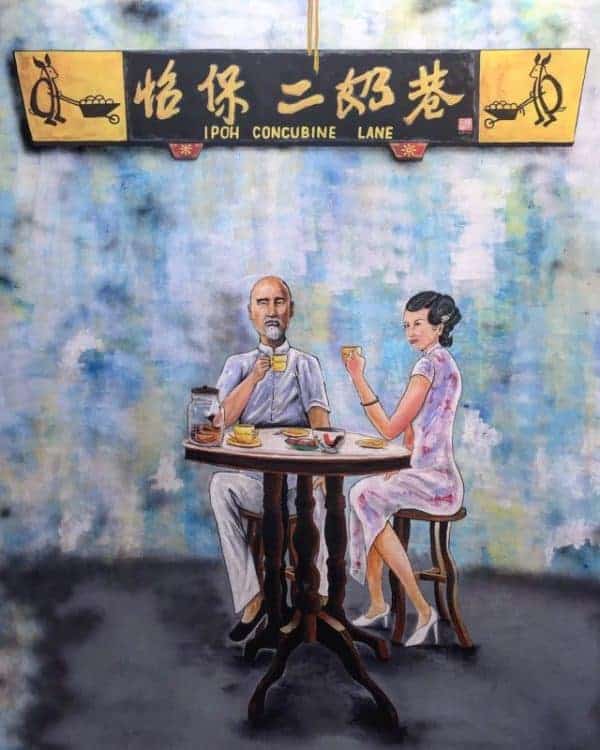 The Ipoh street art scene is one of the main draws for visiting the charming antiquated city of Ipoh. Situated in central Malaysia’s Perak region, the off-the-beaten path city of Ipoh has escaped the eyes of most tourists.

Here, beautiful murals and vibrantly coloured graffiti masterpieces transcend up walls, along the facades of storefronts, and down narrow passageways.

Those who visit Ipoh can easily dedicate an entire day to embarking on an artsy treasure hunt and searching for Ipoh wall art.

Historically, Penang’s Georgetown has been renowned as being the “street art centre” of Malaysia, however, quirky Ipoh is starting to compete for the title.

The Lithuanian artist Ernest Zacharevic is credited with many of Penang’s street art murals, and has similarly painted many of the pieces in Ipoh. The beauty of travelling to Ipoh is that it has not yet been discovered by the tourist masses.

Whereas in Penang you may have to queue up to admire and get a photo in front of the various street art pieces, in Ipoh, you often have them entirely to yourself.

2004 saw the Lithuanian artist Ernest Zacharevic add a touch of colour to the streets of Ipoh by decorating their walls and alleyways with some of his best work. His work is special because not only is it beautiful, it depicts important scenes and realities of the local culture.

The icing on the cake of Zacharevic’s pieces is that his work is often interactive. For example, the Ipoh street art piece “Trishaw” depicts an elderly Malay man loading up cargo onto the back of a trishaw (three wheeled Asian bicycle). A real antiquated bicycle is adjoined to the painting so that you can sit alongside him.

The Ernest Zacharevic Ipoh street art pieces that you can expect to find as you make your way around the city are summarised below:

There was previously another Zacharevic Ipoh wall art piece of a little girl standing on a stool and reaching up towards a bird cage.

You may find it referenced on a number of Ipoh street art guides online, but unfortunately it has been permanently removed, and the owner of the building had it painted over. This is quite sad, but outlines the transient nature of street art.

The ITIC (Ipoh Tourist Information Centre) in Ipoh old town have recently drawn up helpful little maps that outline the locations of all of the major Ipoh street art pieces so that you can embark on a self-guided Ipoh street art tour around the city.

It should be noted that while the map and its self tour focus on Ernest Zacharevic pieces, there is plenty more Ipoh street art to uncover while in town, if you are willing and interested to do so.

The area that surround the ITIC is charming and surrounded by eclectic coffee shops and craft stores. Start your day early with a breakfast or a white coffee in one of the cute spots here, pick up the street art Ipoh map from the ITIC and embark on your journey!

For reference, the details and locations of each of Zacharevic’s pieces can be found below.

The Malaysian white coffee craze started right here in the town of Ipoh. Old town white coffee branches may be scattered throughout the country, but the very first store where the concept was initially envisaged is situated here.

The mural of an old uncle drinking white coffee sprawls along the side of the the Old Town White Coffee branch that is located at 3, Jalan Tun Sambanthan. It’s a classic depiction of Malaysian culture and heritage.

In the heart of Ipoh Old Town, where narrow passageways twist and turn past ramshackle buildings and overcrowded local eateries, the Trishaw street art piece awaits.

The image depicts an old uncle loading bags of trash into the back of his cart. The beauty of this piece is just how interactive it is.

From the old uncle piece, you can continue walking down Jalan Tun Sambanthan in order to reach the Paper Plane artwork. It is situated high up on the wall of an old building at number 35 and cannot be missed. The image depicts two children taking flight in a larger than life paper plane.

Coffee (or “kopi”) culture is huge in Malaysia. It is not just drinking white coffee in old fashioned kopitiams that is a locally adored past time, but also sipping cappuccino and watching the world go by in eclectic coffee shops, or taking a coffee to go as an accompaniment to your morning stroll.

When you order coffee to go in Malaysia, it is typically served in a small bag, tied together with a string, with a straw poking out of it. (10 points for originality, but 0 for environmental friendliness!).

This obscure piece lines the wall of a parking lot and depicts the Malaysian coffee bag tradition.

The Hummingbird piece by Ernest Zacharevic is an adorable light yellow bird that has been painted onto a light blue backdrop. Some of the paint is starting to crumble and fade, but in some ways that add to the charm and character of the piece.

According to the locals, there was once a tree next to the hummingbird, but it was chopped down to make way for the construction of the car park.

Though the addresses that I have referenced in this article are different (for specific location and accuracy), the Hummingbird and the Kopi Break pieces are actually situated at opposite ends of the same parking lot in Ipoh Old Town.

Zacharevic’s “Evolution” mural possesses a somewhat different style to many of his other Ipoh pieces. The image depicts Ipoh’s history as a prominent tin mining town.

You could say that the murals painted by Zacharevic in Ipoh have started something of an artistic revolution in the city. Now, you cannot walk far without being met with vibrant splashes of paint, and stunning depictions of Malay life.

While there is definitely joy to be found in just wandering the streets of Ipoh, allowing yourself to get lost, and stumbling across the various pieces, some of the other notable places to check out are detailed below.

In addition to searching high and low for Zacharevic’s Ipoh street art, the Ipoh mural alley is another location that is very worthy of your time.

The mural alley is situated in Ipoh new town and as the name suggest, every square inch of the alley is covered from top to bottom in vibrant paintings.

The Ipoh mural alley project was started by a local school teacher Eric Lai. After being inspired by Zacharevic, Lai’s objective was to showcase the best of Malaysia’s multicultural heritage in a playful way.

Artwork has been contributed here by locals of all ages and backgrounds. Quite frankly there are far too many images to be able to photograph and include them all here!

The Concubine and Market lanes of Ipoh are the most popular places for tourists. Some of the most stunning artwork can be found here. Many follow on from Zacharevic’s style and boast a 3D, interactive design, or exist to reflect what life is like in Malaysia.

Popular images include a beautiful interactive piece of a couple eating noodles, where travellers can sit on a stool and join them, and a similar 3D piece featuring three old uncles sipping tankards of beer.

The Ipoh street art scene has expanded rapidly in recent years, and today, street art is not only found in alleyways and on the facades of buildings, but also inside galleries and exhibitions.

Showcasing the works of local Chinese Artist Chin Choon Yau, the Wisme Chye Hin exhibit is the largest indoor art exhibition in Ipoh. The charming exhibit depicts scenes of everyday life in Ipoh in the 1920s-1960s.

The brightly coloured murals here show what traditional stores and markets looked like in Ipoh during this era.

Ernest Zacharevic’s street art pieces date back to 2004. Many of the “inspired” designs were started shortly after. Though impressive, the unfortunate thing about much of the Ipoh street art is the lack of efforts taken to preserve them.

Due to weather, time, and wear, many of the Ipoh street art pieces are starting to crumble and fade. In some ways, this adds to their aesthetics, but perhaps in a few years from now, the pieces will be shadows of what they once were.

Discovering Ipoh Beyond the Street Art

For those who know about Ipoh’s existence, the sheer mention of the city has become somewhat synonymous with the Ipoh street art scene. While the street art is lovely, and discovering it is a great way to spend a laid-back afternoon, it is not all that Ipoh has to offer.

In a similar way that Ipoh is now challenging Penang for the title of being Malaysia’s most artistic city, it is also a worthy contender for the gauntlet of being the country’s foodie capital.

Plenty of much loved Malay delicacies originated in Ipoh – including nasi ganja (addictive “marijuana” rice), and Ipoh white coffee. Exploring the kedai kopi stores and local eateries is as much of an Ipoh highlight as the Ipoh street art trail.

Ipoh, and the wider Perak region also boasts a lot of history and culture. I have written extensively about the various Ipoh attractions in this Ipoh Travel Guide.

Crumbling “haunted” ruins, quirky coffee shops, breathtaking temples and majestic limestone caves are just a few of the attractions that make Ipoh such a wonderful place to visit during your Malaysia itinerary.

It is easy to get to Ipoh from both Kuala Lumpur and Penang. From Kuala Lumpur, you can reach Ipoh in just two hours.

Trains and buses both run to Ipoh frequently throughout the day. If you prefer to take the former though, it is advisable to book your ticket in advance as the seats often sell out.

Trains depart hourly from KL Sentral to Ipoh, Perak. The journey takes approximately two and a half hours.

The good thing about taking the train from Kuala Lumpur to Ipoh is that the Ipoh train station is centrally located in the old town district. From here, it is just a short walk to Ipoh’s main attractions such as the Concubine lanes, and the Zacharevic Ipoh wall art.

It takes a little longer to get to Ipoh by bus from Kuala Lumpur (circa three hours), but this is still a comfortable and convenient alternative, particularly if during a holiday when the trains are fully booked. Buses depart at regular intervals from the Kuala Lumpur Terminal Bersepadu Selatan bus station.

It should be noted that the Ipoh bus station (Terminal Amanjaya) is situated slightly outside the city limits, however, a Grab taxi will get you to your central hotel/hostel for less than 10 ringgit ($2.50).

Have any questions about the Ipoh street art trail or Malaysia travel in general? Feel free to reach out to me by email or via the comment box below!