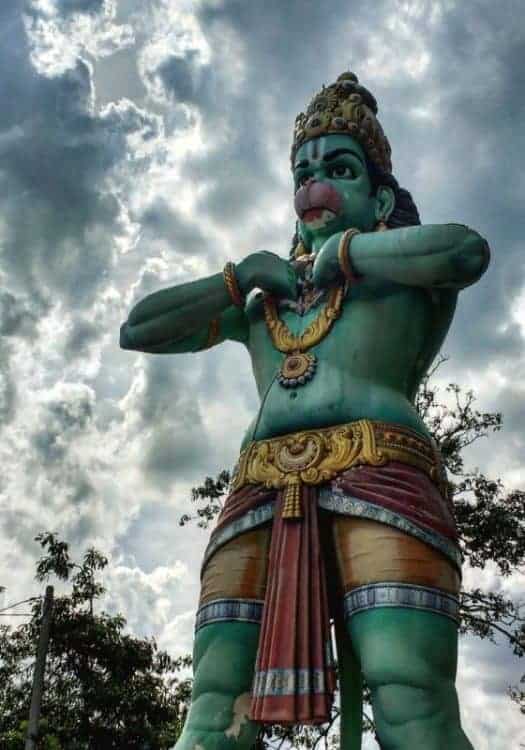 With giant imposing gold statues of important Hindu deities that stand guard at the cave entrance, and the beating drum lines of Punjabi rhythms that echo through the complex, the Batu Caves make for a rewarding and culturally fulfilling day trip from Kuala Lumpur.

Approximately 7% of Malaysia’s population are Indian and a visit to Batu Caves provides an interesting insight into their culture. Watch on as barefoot pilgrims sporting tilaka ascend the 272 steps to the main temple to pay respects to their religion.

After reaching the peak of the staircase you are rewarded with incredible panoramas across Kuala Lumpur and beyond. Numerous cheeky macaques inhabit this staircase acting as fluffy hurdles that pester tourists for snacks. Wonderfully colourful and elaborate temple annexes and statues are scattered throughout the interior.

The name of the Batu caves comes from the Malay word for stone. Considering the fact that the caves exist within a huge limestone hill that protrudes from the earth just north of Kuala Lumpur, this a fitting title. The caves were originally discovered by Chinese immigrants in the 19th century. They then became something of religious importance in 1890 when an Indian trader observed the shape of the main cave and decided to build a shrine to Lord Murugan, the Hindu god of war. From there, the inspiration for the temple complex that stands today was born.

How to Get to Batu Caves from Kuala Lumpur

Numerous hotels and tour companies offer Batu Caves tours but honestly you may as well save yourself the $50 and do it all independently. Admission to the cave facility is free, though there are additional charges for tours of the “Dark Caves” or for those eager to try mountain climbing on site.

KTM Komuter Trains run frequently from KL Sentral to Batu Caves and cost just £3. The journey takes around 30 minutes. It’s not necessary to book tickets in advance but it’s worth checking the schedule beforehand. Malaysian trains have “women’s only” carriages for the comfort of female travellers.

The alternative way to get to Batu Caves from Kuala Lumpur is to take the bus. To do this, take the KL monorail to Titiwangsa station. There is a bus that runs directly to Batu caves from Titiwangsa.

What to See at Batu Caves

The Batu caves are actually much more than the enclave that awaits at the top of the stairs behind the Lord Murugan statue. There are in fact several other smaller caves and attractions in the area that are very worthwhile to visit. These added extras are not very well sign posted and so it’s useful to know where you are going.

In summary while you are on site at the Batu Caves, you can visit:

The main temple cave is free to enter, though small additional extra fees are applicable for visiting the Ramayana cave, the Dark cave, and the Cave Villa.

The Temple Cave is of course the main highlight of visiting Batu Caves. It lies behind the classic image that you always see of this location – the 272 steps guarded by a 42m statue of Lord Murugan.

The grand cave that awaits inside the temple cave entrance is comprised of two phenomenal caverns connected by a staircase. Colourful statues scattered throughout the cave show depictions of peacocks and other important symbols in Hinduism.

Murugan’s six houses are carved into the walls of the first floor, and visitors and devotees can receive tilaka blessings within. The second floor of the cavern is dedicated to Murugan’s wife. At the time of writing this article (January 2019), some construction work was still underway at Batu Caves with new shrines being erected and maintenance work taking place.

When you exit the train station at Batu Caves, before you approach the main temple entrance, you will find the Ramayana Cave on your left hand side. The entrance is slightly tucked away from view behind the looming mint green statue of the Hindu god Hanuman. Access to the Ramayana Cave is 5 ringgit (£1/$1.50) but very worthwhile.

Inside the Ramayana Cave are spectacularly colourful neon paintings, statues and dioramas depicting the Indian “Ramayana”. Information boards within fill non Hindus in on the story of Lord Rama’s life. Ramayana Cave is typically more calm and less filled with tourists than the main temple.

Though the Dark Cave is situated within the Batu caves complex, it is actually managed separately from the remainder of the site. The Dark Cave is home to a diverse range of rare insects, bats and snakes. One of the rarest spiders in the world can be found here (the trapdoor spider). No thanks!

A visit here is only possible via a tour, though exploring the cave with one of the resident scientists working here provides a valuable insight into this unique natural habitat.

The cave villa is situated adjacent to the main temple cave entrance. It is not a cave, but a cultural centre which uses beautiful murals and wall paintings to depict the history of Hinduism and Indian culture in general. Admission to the Cave Villa is an additional 10 ringgits or $2. The experience is informative and educational. Unfortunately there are also many caged reptiles and animals here so I cannot completely say that I support this tourist site.

There are a small selection of vegetarian Indian restaurants at the base of the Lord Murugan statue that serve great banana leaf dishes. If you haven’t tried banana leaf style dining it’s worth it for the experience alone!

Banana leaf cuisine consists of a small pile of rice, mini poppadums, and an array of vegetables served up in different spices and sauces which are then neatly presented on a banana leaf. In case you were wondering – nope the banana leaf itself is not edible! That’s something I discovered only after tearing off a piece of leaf, trying to roll the food up inside it like a fajita and hearing a clatter of pots as the server dashed over to exclaim “no lady, no no no!”

For those for a weaker spice tolerance, you can opt for milder classic delicacies like daal. Of course, then you can wash it all down with a lovely cup of Indian chai tea.

Honestly, although Batu Caves is one of the major Malaysian tourist attractions close to KL, these places didn’t feel like tourist traps. The menus featured local prices and there were more devotees and locals dining at them than foreign travellers.

You should dress conservatively to visit Batu Caves. In other words, no super short shorts and no tank tops. Shoulders and legs should be covered. There is a small rental station at the foot of the stairs where ladies will offer saris for those that are not appropriately dressed. Sari rental is 5 Malaysian ringgit ($1), and you receive back 2 ringgit if you return it in one piece.

Have you visited Batu Caves Malaysia? What did you think? Alternatively if you have any questions about how to get to Batu Caves from Kuala Lumpur or on taking a Batu Caves tour, feel free to reach out to me in the comments below!

Disclaimer: High Heels and a Backpack occasionally uses affiliate links. This means that if you make a purchase through some of the links contained within this Batu Caves Malaysia post, I may receive a small amount of commission at no extra cost to you. This helps me keep up with the costs of managing this site. Thank you for your understanding.