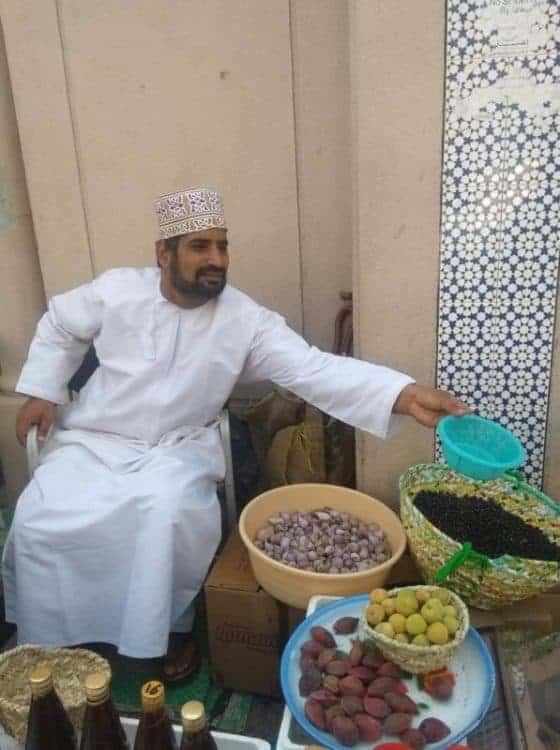 As the weekend crept closer, there was a buzz in the atmosphere of Nizwa -The Nizwa friday market was approaching. The large parking lot that surrounds the town’s commercial centre was suddenly jam-packed with farmers trucks filled with livestock, and boxes upon boxes of fresh produce.

The market has been a local tradition for several centuries and business is still conducted in an old-fashioned manner. Farmers from all over the Ad Dakhiliyah region of Oman travel from far and wide to auction their animals and sell the results of their latest harvest. I actually extended my trip in Nizwa for the purpose of attending the market. Not your typical tourist attraction, that’s for sure. However, the Nizwa friday market is certainly an authentic insight into local life in Oman and worthy of a spot on your Oman itinerary.

Early on Friday mornings, the stalls of the Nizwa souk come alive with activity and plenty of ferocious haggling. No doubt the highlight of this is the goat and livestock market. Things run early in Oman. It was barely 6am when the auctions were already in full swing.

Bleary-eyed and questioning my life choice to get up at 5am to look at goats,I followed the crowds of Omanis heading to the livestock auction. Here, locals gather around a sanded area as the animals were brought out one by one. The event would be best described as a sort of animal catwalk.

Farmers led their animals around by rope in a circle. Interested parties such as restaurateurs and breeders would wave them over to express their interest and start to enquire about the animal. Questions arose about the animals’ diets, mouths were pried open to check teeth, and so on.Those interested would offer an amount of money for an animal and often a bidding war would ensue.

The goats and the sheep came and went. Dozens of Omanis sat around now chatting, drinking karak tea and holding the harnesses of their new purchases. The Nizwa friday market seemed to be as much a social event as it was a commercial one. Many participants appeared to attend to catch up with their friends from nearby towns and villages rather than to make a purchase.

Everything was running pretty smoothly up until the cows and the bulls were bought out. The farmers tried to lead their cows around the podium area in the same orderly manner as the goats and sheep but the cows clearly had other ideas in mind. Some of them tried to mount their cow crushes for a bit of lovin’. A bull tried to run at the audience. Chaos. Strangely, no-one else seem phased by the raucous bull but I panicked and dramatically dived over a wall like Indiana Jones shouting “aaahhhhh!!”. (Survival instinct y’all.)

As the only tourist (and only female) in attendance, people were already looking at me strangely at the Nizwa friday market. They definitely thought I was more weird after that though.

My Omani friend told me that once or twice, cows have made a bid for freedom and tried to run off through the souk. Apparently the farmers have had to jump onto the cows to stop them a number of times. I am sure that that is quite a sight to see!

Browsing Through the Nizwa Souk

As the last rambunctious cow was sold on to its new owner, and they smiled at each other like the Buyer wasn’t going to cook him for dinner, the crowd gradually dispersed. Nizwa souk is in operation every day of the week, but additional stalls are set up for the Nizwa friday market. If you are going to be in the area for a few days, I would advise waiting until the Friday to haggle your way through the souk.

I sampled an array of candied and seasoned dates at the nearby date market, chatting with the owner as he offered me a cup of Omani karak tea before continuing on to the fruit and vegetable stalls. The souks of Oman are altogether different to most in the Middle East. You will not be hassled and pestered to buy anything here. If anything, people were just handing things over to me to try for free!

One section of the souk was dedicated to selling small animals for pets such as birds and cats. To my surprise, older children and teenagers were manning these stalls. According to my Omani friend, the logic behind this is to get younger generations into the business mindset from the offset.

The indoor section of the souk sold all manner of weird and wonderful items. One passageway was dedicated to selling guns and ammunition. Shooting is a much loved hobby among guys in Oman, and carrying a big gun is something of a status symbol. It was fascinating to see the locals carefully inspect huge automatic machine guns and haggle over the price.

I called it a day with my candied dates and headed back towards Muscat after an enjoyable and eye-opening experience at the Nizwa friday market.

Have any questions about the Nizwa friday market or Oman travel in general? Feel free to reach out to me via the comments below!