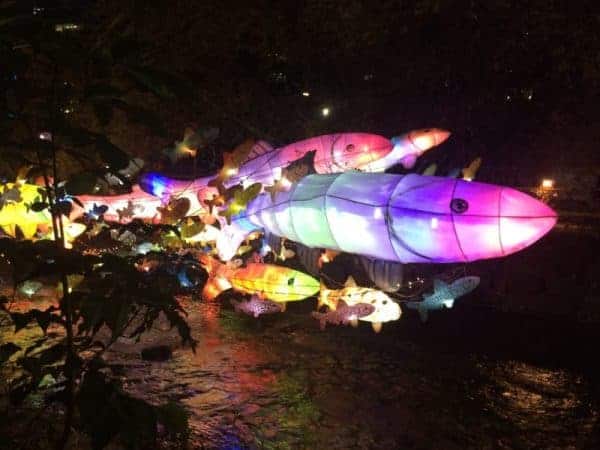 The Seoul Lantern Festival is an annual event that is hosted on the Cheonggyecheon stream every autumn. It’s a pretty spectacular site to behold, so if your trip to Seoul coincides with this, you should definitely stop by.

What is the Seoul Lantern Festival?

Lanterns are contributed to the festival from all over the world. It is estimated that more than 3 million people attend the Seoul Lantern Festival every year, making it quite a big affair.

The Seoul Lantern Festival and its Themes

The festival was first introduced in 2009 and has been going strong ever since. While the lanterns depict a vast array of things – from Korean cultural sites to eccentric Japanese anime figures, a different main theme is identified every year.

It was 2016 when I visited the Seoul Lantern Festival. The theme was ” Lightened Hangang River where history flows”. Since the Han River is the largest river that flows through the country, the theme aimed to depict what traditional life was like by the river.

More recently, in 2018, the theme was “Seoul Dream”, and paper lanterns of old street cars, Korean military officials, and local delicacies were crafted to depict the history of Korea.

The Seoul Lantern Festival is free to attend. However there are lots of “extras” available as you make your way down the Cheonggyecheon. You can purchase paper lanterns of various sizes here, and then paint and decorate them as you like before setting them off to float down the stream.

A lot of the purchasable lanterns are themed around the Lunar New Year, and good luck symbols in this calendar. The lanterns cost just a few thousand won, and it’s a nice experience.

The atmosphere of the Seoul Lantern Festival reminded me of being at an American 4th July celebration or another similar event. Although the lanterns are up all day, it’s best to stop by  in the evenings when they are beautifully illuminated and the ambiance is almost magical.

Light shows are projected onto the buildings and bridges that encircle the Cheonggyecheon, while traditional music plays out from loudspeakers.

The banks of the stream and the surrounding streets are crammed full with street food vendors who serve up all the classics – from spicy, tomatoey tteokbokki, to sweet red bean pastries.

Visiting the Cheonggyecheon is certainly one of the best things to do in Seoul. All year round, its walls and banks are decorated with contemporary art installations and inspiring graffiti. Keep your eyes peeled for this too as you walk its length for the festival.

Getting to the Cheonggyecheon

Since the Cheonggyecheon runs 11 kilometres through downtown Seoul, it is easy to join the trail through the lantern festival at any point. There are pathways on both sides of the stream so that you can walk up one side, and then return back from the other.

The best ways to reach the festival site by public transport are outlined below. Don’t forget to purchase a T-Money card to ensure that you receive discounted fares across Korea.

Reaching the Cheonggyecheon by Metro

There are several Seoul metro stations that are just a few minutes walk away from the Cheonggyecheon.

You can opt to use Jonggak Station (Line 1), Exit 4 or 5, or  Euljiro 1-ga Station (Seoul Subway Line 2), Exit 2 or 3. These stations leave you close to Cheonggye Plaza.

Other Things to Do Nearby

Attending the Seoul Lantern Festival is probably going to take up no more than 1-2 hours of your evening. There are plenty of attractions, restaurants and bars in the area to occupy your time before and after the event.

Have any questions about the Seoul Lantern Festival or your Korea itinerary in general? I lived in Seoul for two years and would be happy to assist with any questions you may have. Feel free to drop me a comment below. Safe travels. Annyeong! Melissa xo

Note: This article was originally written in November 2016. It was last updated on the 3rd October 2019.