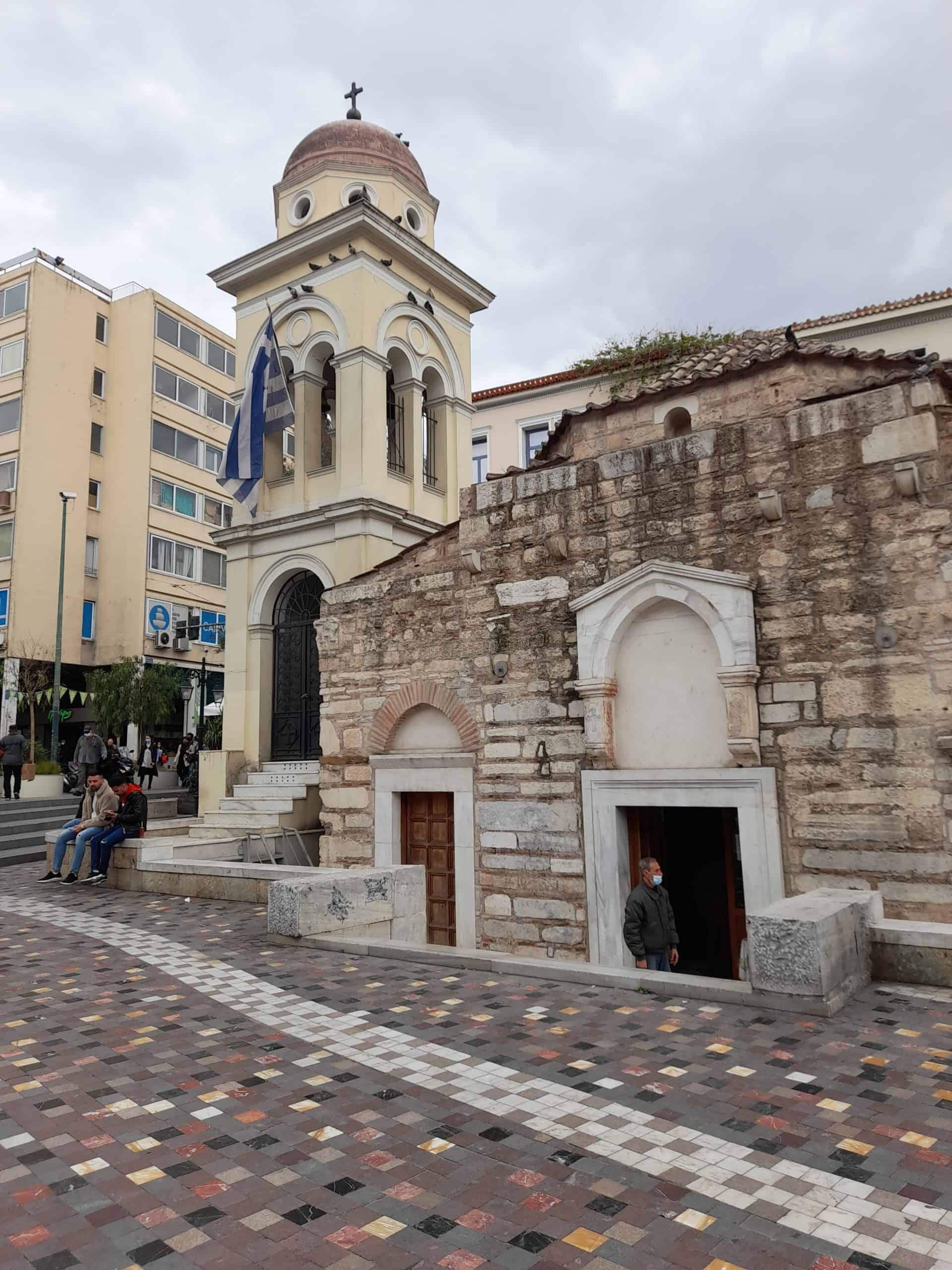 It is easy to get from Athens to Lavrio port Athens. You have a number of transport options available to you in order to do so which are discussed in this post.

Lavrio port is the farthest of the three Athenian ferry ports. It is also the smallest.

This is arguably not the most convenient port to travel from. So, depending on which island you’re headed to, you should double-check as to whether you can take the ferry from Piraeus, first and foremost. Piraeus is much closer to central Athens and easier to get to by public transport.

Lavrio port services the islands of the Cyclades. A limited number of passenger ferries depart from here, mostly running to nearby Kea and Kythnos.

Two services a week run from Lavrio to Kavala in Northern Greece. There are also occasional services to the North Aegean islands.

Getting from Athens to Lavrio Port

Getting from Athens to Lavrio port is relatively easy. The same is true whether you are travelling from the city centre or from Athens airport to Lavrio. The best way to travel depends a lot on you and your budget.

Honestly the most convenient way to get from Athens to Lavrio port is to do so by taxi. This is also the most expensive option.

However, if you are travelling as a group and divide the fare, it really doesn’t work out much more than travelling by public transport. Taxis in Greece have fixed fares for certain routes and the journey from Athens airport to Lavrio port is one such example.

The fixed day rate from Athens airport to Lavrio is €47. The night rate is €70.

You can expect to pay slightly more if you are travelling from central Athens – circa €60-65. Most airport cabs are fine to use.

Unfortunately, there are also a lot of tricksters in Greece who will charge tourists double or even triple (or more!) the going rate. They do this with the assumption that you won’t know what the correct price to pay is and some become aggressive when challenged.

Always confirm taxi rates before getting in the vehicle. You can ask your Athens hotel receptionist to order a taxi and confirm the price for you if you like.

The best way to order a cab though, is to use the Taxi Beat app. This is our answer to Uber, although only licensed cabs are permitted to operate.

The app connects you with a local driver. Most importantly, it shows you the route and provides a price estimation before getting in the car so that you won’t be ripped off.

You can also organise a private transfer service from Athens to Lavrio, if you prefer. This might be particularly preferable if you are flying into Eleftherios Venizelos and need a transfer from there.

Private transfers are typically only slightly more than cabs. Some companies even match the same prices as yellow cabs yet offer more personalisation. You can expect to be greeted at the Arrivals terminal by someone holding a sign with your name.

Cars are typically clean, air-conditioned, and you are provided with complimentary bottles of water. Get Your Guide is one company that offers such a service. You can find out more about the transfer services they offer here.

Pedion tou Areos is in a somewhat awkward location close to Athens’ Exarchia district. Attiki and Omonia are the closest metro stations.

It should be noted that this bust does not run all the way to Lavrio Port Athens. You will need to take a short cab ride or walk through Lavrion town in order to reach the port. The cab journey should only cost a couple of euros but allow time for this change.

Tickets from Athens to Lavrio cost €4.90 with concessions available. This journey takes approximately an hour and a half depending on traffic.

KTEL Attiki services the bus routes around Athens and Attica. You can check the latest timetables and fares for the Athens to Lavrio bus here.

If you are planning on travelling to the Greek islands from Lavrio, check all of your ferry details in advance. You can use Ferry Scanner to check the most up-to-date route, pricing, and schedule information.

It is best to reserve your tickets online, in advance if you can. It is not unheard of for ferries to sell out, especially in July and August.

Points of Interest in and around Lavrio Port

Lavrio is not a tourist destination in itself, but there are some interesting things to see and do nearby. If you have just a couple of hours to wait before your ferry, treat yourself to a spanakopita (Greek pastry with spinach) and a strong Greek coffee at one of the coffee shops near the waterfront.

The town of Lavrio has been inhabited since the neolithic period. Today, it has a permanent population of around 10,000 people.

There are a few interesting beaches and historic sites close to Lavrio if you have more time to spare. Transport in the area is infrequent and not extensive so a lot of places in southern Attica can only really be explored fully if you have a car.

Relax on the Nearby Beaches

Some of the best beaches close to Athens can be found close to Lavrio. While it may be the Greek islands that get all the recognition, beaches on the mainland can be equally as stunning.

Lavrio beaches boast golden sands and cerulean waters so clear that you can see to the bottom. Some Lavrio beaches are serviced and it’s possible to rent sunbeds, chairs, and watersports equipment for a perfect day at the beach.

The vast majority of beaches in this area, however, are unserviced, secluded spots. They exude desert island vibes and are perfect places to escape the crowds in the height of summer.

Some of the best beaches in and around Lavrio and Southern Attica are shortlisted below for your consideration. You will also find lots of “hidden” tiny beaches around known as “limanakia”.

Cape Sounion is one of the most popular day trips from Athens and for good reason. The Temple of Poseidon that sits on a rocky bluff here is one of the best-preserved Ancient Greek temples in the country.

The Temple has a fitting location for one that is dedicated to the Ancient Greek God of the Sea. On stormy days, the waves of the Aegean lap violently against the rocks surrounding the temple.

This is a perfect place to watch the sunset and simply revel in the views as you watch sailboats drifting along the horizon. The temple was constructed in 444 BC – the same year as the world-famous Athens Acropolis.

You will note the similarities between the two structures. Once upon a time, Sounion was a very important trading port for Ancient Greece.

You will find reminders of its important past as you meander around the seafront close to the Temple of Poseidon. The sun-bleached remnants of ancient walls, defenses, and houses still remain.

Various other interesting sites can be found in this area. Sounion National Park is the smallest national park in Greece and boasts some pleasant hiking trails.

Similarly, if you are interested in experimenting with Greek food and local cuisine, you can head to the village of Kalyvia Thorikou for lunch or dinner. It is famous for its chophouse restaurants and the eateries here specialise in sumptuous, marinated meats.

Visit the Ancient Theatre of Thorikos

The Ancient Theatre of Thorikos is believed to be one of the oldest theatres in Greece. It was not excavated until 1886 and still today, archaeologists are constantly making new discoveries in the region.

The theatre is interesting because it is of an obscure, almost rectangular shape. This is very different from the usual layouts of Greek amphitheaters and it seems to reflect something of a “trial and error” that was being done in the very early days of Greek theatre.

The historical site is free to enter and most tourists are not even aware of its existence. It dates back to the 6th century BC.

The (badly preserved) remnants of a temple dedicated to Dionysus. Thorikos was once a very important Ancient Greek settlement.

That is until it was abandoned in 86 BC. Today, there are just a few houses scattered around the countryside and olive groves of Thoriko and Ano Thoriko.

You may travel from Lavrio port if you are taking the ferry from Athens to Kea. Since fewer ferries depart from here, Lavrio never really gets as crowded as, say, Piraeus port.

That being said, these ferry routes are very popular during the summer months. As such it’s always a good idea to arrive around an hour before your boat is scheduled to depart. This is particularly the case if you need to pick up tickets.

Ferry prices are subject to change depending on seasonality. Additional fees apply if you are travelling on board with your vehicle, rather than as a foot passenger.

If you arrive in Athens late at night and need a place to stay before you board your ferry, or you just want to break up your journey and explore southern Attica, Lavrio has plenty of accommodation options. There are not an awful lot of hotels here.

However, there are plenty of rentals. You will find accommodation choices here suitable for all budgets and travel styles. If you have a car and can travel a little farther out, you might prefer to stay close to Sounio.

Do you have any further questions on Athens Lavrio port or how to get there? Drop a comment below and I’ll get back to you ASAP.