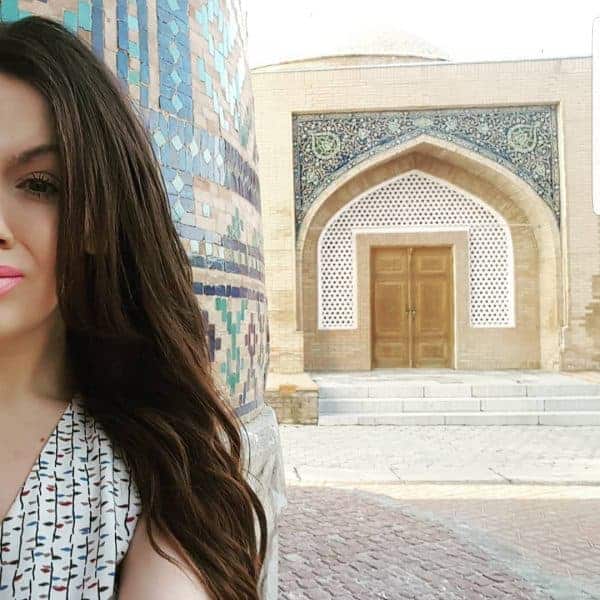 The question of whether Uzbekistan is safe to travel to is likely high on your list of concerns when considering a trip here. After all, Uzbekistan isn’t the most common travel destination, and there aren’t exactly a wealth of resources available about it out there either. Add to that fact, the connotations that come with the country ending in -stan and the fact that Uzbekistan’s neighbour is Afghanistan and its easy to understand why you may be concerned.

So is Uzbekistan safe to travel to? The short answer is a resounding yes. However, to provide more context and assurance, let’s look at the experience of travelling to Uzbekistan in more detail.

My Experience Travelling in Uzbekistan

I spent three weeks travelling in Uzbekistan in May 2019. I flew into Samarkand and visited the Silk Road cities of Samarkand, Bukhara, and Khiva, stopping briefly in Urgench and taking an overnight train to Tashkent. I spent longer than was really necessary in Tashkent because I needed to do some work while I was travelling. I then briefly visited the Fergana valley and the villages that occupy it.

Obviously I am by no means an Uzbekistan expert, however, I did do the entire trip independently as a solo female traveller in her twenties, so I can surely provide some insight into the question of “is Uzbekistan safe?”

Is Uzbekistan Safe to Travel to:
The Statistics

According to statistics, Uzbekistan is virtually a crime-free zone. At one point in time, Uzbekistan was noted as being one of the safest countries in the world.

While that is reassuring to hear, and I definitely don’t dispute the fact that Uzbekistan is safe to visit, you should keep in mind that Uzbekistan is a dictatorship and a former USSR state. That is important to remember as the government of Uzbekistan have not been completely honest or provided transparency on their actual numbers.

One thing that I found pretty interesting about Uzbekistan is that people (including women) frequently get around by hitchhiking. As in, if someone is out shopping for the day in Samarkand they will just stick their arm out into the street and wave it around, and drivers that are heading in the same direction as the individual will offer them a lift on their way.

I think the fact that people do that every day, having blind trust in strangers, and yet there have never been any incidents speaks volumes about the safety of the country – even for solo female travellers. This may have something to do with my next point – the police presence in Uzbekistan.

Uzbekistan as a Police State

Uzbekistan is a police state and here, police are everywhere. You will find officers stationed outside of Silk Road attractions even in the dead of night. Little outposts are positioned every few hundred meters or so along each road.

Honestly, I found this quite intimidating at first – I guess just because it is something that I’m not used to seeing. Perhaps another reason is on account of the advice that I had read in guidebooks about Uzbekistan – to steer well clear of the police as many of them are corrupt and exploit tourists for bribes. Even the bible of travel, lonely planet themselves advises this.

Basically, when I arrived in Uzbekistan, I was kind of on edge about potentially running into the police. I was walking near the Registan in Samarkand when an officer stopped me and told me I had to pay a fee to get in. Being incredibly suspicious after taking heed of the Lonely Planet advice, I thanked him, turned around and walked all the way back around the Registan before discovering that you did, in fact, have to pay to get in.

My other experiences with the police were fine too. At a festival in Bukhara, they were approaching me in the street with beaming smiles on their faces, welcoming me to their country.

In Samarkand, I asked a guard outside of the Emir Timur mausoleum to help me take a photo, half expecting him to say no. To my surprise, he jumped out of his chair in enthusiasm and essentially commenced a photoshoot like he was working for Vogue – “to the left! To the right! This is gold, darling, gold!”

After the death of Uzbekistan’s notorious Dictator in 2016, the country has gone through an extensive reform. One way in which this has been happening has been in the retraining of the police forces, and in encouraging a more ethical approach to policing.

As a tourist, you don’t have to worry about the same corruption as you once did. Admittedly you can still bribe police officers to enter historical sites that are closed-off, but that’s more someone trying to make a quick buck rather than anything else.

While we are living in something of an age of terror and it would be unwise to say that any country is completely free from the possibility of terrorism, Uzbekistan has zero records of terrorist attacks.

You might have heard that one of the most dangerous terrorist groups in Central Asia (the Islamic Movement of Uzbekistan) once operated in the Fergana Valley and worked under the Taliban. That’s true.

However, the government has since gone to great lengths to stamp out the risk of any such event happening again – to the point where mosques are not allowed to blast out their call to prayer, and men with thick beards are looked at with concern. Obviously this is unfair profiling of innocent Muslims, but just to demonstrate the efforts of the government and their condemnation of any terrorist activity on their soil.

No doubt another concern about travelling to Uzbekistan is found when looking at a map and making note of the countries that border it – particularly Afghanistan, a country that has been tormented by war and rebel groups for years now.

Never forget that a country is not its neighbour. Turkey borders Syria for example, but millions travel to Turkey every year and enjoy trouble-free visits. Equally, France and Germany border each other but you can’t say that the countries or cultures are the same.

The border that stands between Uzbekistan and Afghanistan is one of the most fortified and secure in the world. For Uzbekistan, security of the country’s citizens and visitors is paramount. Even to travel in the border area between the two countries, a special permit is required, and the military presence is high.

Following the changeover in Uzbek government, and the various reforms within the police force, perceptions of safety in Uzbekistan, and the ease of getting around the country have both improved dramatically.

A 2019 Gallup poll questioned residents of 142 different countries on how safe they felt in their native lands. It covered various scenarios related to their safety, such as whether they have ever been a victim of crime, whether they trusted the ability of their police force, and whether they felt safe to walk alone at night. Uzbekistan’s results were overwhelmingly positive.

In a Solo Travel Safety Report that was released this year, Uzbekistan came in 5th place, with Iceland, Singapore, Finland, and Norway just in front. If that isn’t reassuring, I don’t know what is.

Safety in Uzbekistan: Solo Travel as a Woman

I travelled completely independently through Uzbekistan and consider my trip to be one of the best adventures I have had so far. There were never any occasions where I felt creeped out or afraid while walking around the various cities.

Despite the fact that this is not commonplace for solo travel, and I definitely stuck out like a sore thumb, people didn’t gawp or comment, and I think that being alone gave me more opportunities to talk with locals – i.e. on the night train from Urgench to Tashkent, families were inviting me into their cabins for a chat and offering me food and snacks. This is an experience that I will treasure forever. Maybe it wouldn’t have happened if I wasn’t alone.

I did have one very negative experience in Uzbekistan that I believe was down to one weird individual, as opposed to reflecting Uzbek people in general. When I was in Bukhara, I stayed at a place called the Rizo Boutique Hotel which I would strongly advise you to avoid.

The letchy hotel owner made many creepy comments about my appearance, used my check-in information to take my contact details and kept calling and banging on my door in the middle of the night asking to “get to know me better”. I had to barricade myself in the room, and it was one of the most uncomfortable experiences I have ever had while travelling.

I took a 17 hour night train from Khiva/Urgench to Tashkent while I was travelling through Uzbekistan. While it wasn’t an experience I’d necessarily repeat in a hurry, it was certainly an experience!

I’d say that these trains are pretty safe, even as a solo traveller. Police are actually stationed along every few carriages, and every now and then, someone got on board to do identity checks.

For added comfort and privacy though, I’d probably advise you to try and get your own private cabin rather than sharing with 50 or so people in the third class section. If you so wish, you can opt for your luggage to be kept in a designated luggage car.

The road conditions in Uzbekistan leave a lot to be desired, but things are being improved and the recent uptick in tourism is aiding the country in being able to finance necessary maintenance works.

A lot of roads are uneven, old, and filled with potholes. Driving from Bukhara to Khiva meant having to go onto the other side of the road to swerve holes in the ground and then dodge oncoming traffic – almost like being on a ride at Universal Studios! A tarmac road had been built for a portion of the way so as I say, things are improving.

If you are still worried as to whether Uzbekistan is safe to travel to, or you have any unanswered queries, feel free to drop me a comment below and I will get back to you as soon as I can. Safe travels, Melissa xo