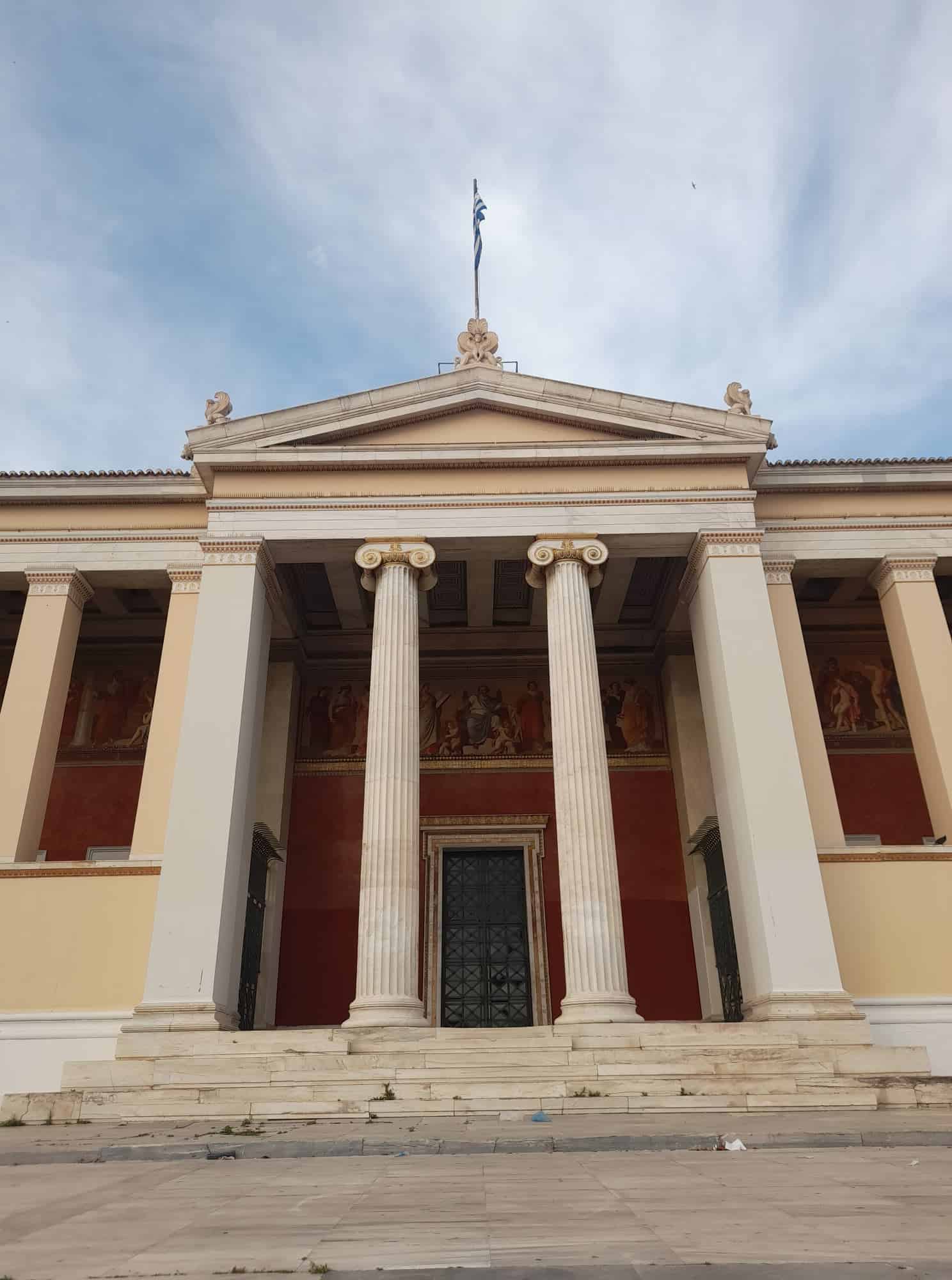 Greek Philosophers are renowned across the globe for the ways that they have shaped the world of ethics and critical thinking. Despite the fact that they existed thousands of years ago, in the classical age of Greece, their thinking is still very relevant today.

The works of Greek Philosophers continue to be studied in modern-day universities and philosophy courses. These individuals remain experts in their fields, unchallenged by generations and generations of global philosophers that followed.

Greek Philosophers like Socrates, Aristotle and Plato need no introduction. Their life’s work is also strongly intertwined with Greek history and archaeological sites.

For instance, on the outskirts of Athens, you can still visit the sunbleached remnants of Plato’s Academy. Similarly, the Lyceum of Aristotle, close to Pangrati, Athens, was founded by Aristotle in 335 BC.

Sadly today it isn’t in the best condition. However, it’s worth passing by if you happen to be in the area visiting the Panathenaic Stadium. Its existence acts as another indicator that Greek Philosophers left a tremendous mark on Greek history and culture today.

Most people are aware of the “big three” Greek Philosophers. Namely, they were Socrates, Plato, and Aristotle.

Socrates mentored Plato. Plato then used the teachings that he had gained from Socrates to develop his own views on philosophy and the meaning of life. Eternally grateful to his teacher, he spread the works and teachings of Socrates far and wide.

From there, Plato then taught Aristotle. Interestingly, Aristotle was then called upon to teach a young Alexander the Great.

So as you can see, Greek Philosophers have had a great impact on Greece. These three great names are the first that spring to mind at any mention of Greek philosophy.

However, they are not the only Greek Philosophers in existence. Whether you are expressly interested in Greek philosophy, or you simply consider yourself as being a Grecophile, it is worth being informed about the great minds that have shaped the country.

If you are particularly interested in Greek Philosophers, you may also want to consider reading their works. Many are available for purchase via both paper and digital format.

Despite the significant amount of time that has passed since these people were at work, the revised Oxford translations of these studies are relatively concise and easy to read. A suggested reading list is included in this article.

Socrates was an enigma. He is one of the most famous of the Ancient Greek Philosophers and is widely regarded as being one of the founding fathers of western philosophy.

His work style was unconventional, as were his teachings. Socrates did not write a single thing down. Instead, he passed on his wisdom to his receptive students – a group of individuals that included Plato.

Socrates was a controversial character and was essentially born ahead of his time. He hailed from Alopece, an area just outside the city walls of Athens.

Ancient texts mention him as being incredibly ugly and unkempt. He let his hair grow long, his physical appearance was far from aesthetic, and he walked around with bare feet.

His appearance was a cause for apprehension and concern in Athens at that time. But most of all, Socrates shook up the “way of doing things” at the time.

He encouraged the people of Athens to question everything. He was often seen wandering barefoot around the Ancient Agora in Thissio, Athens speaking to people of all ages and backgrounds.

Unfortunately, this was seen as almost blasphemous. The Greek authorities at the time believed that he was poisoning the minds of young Athenians.

He was tried and sentenced to death. He then took his own life.

If you visit Filopappou Hill in Athens, you will note that “Socrates prison” can be found there. For a period, this cave was believed to be the place where Socrates was imprisoned.

That theory was later disproved. Although interestingly, this structure was used to hide important artifacts from the Germans during the second world war.

Plato, like his predecessor Socrates, is widely considered one of the pioneers of western philosophy. He was born to a wealthy family in Athens. His family was so aristocratic, that in fact his father, Ariston, believed that his side of the family was direct descendants of the God Poseidon!

Plato would later go on to be the founder of the very first institution of higher education in the world (his Academy in Athens). Great mathematicians such as Theaetetus and Eudoxus of Cnidus studied here.

Plato was a strong believer in virtue ethics. This is one of three approaches to ethics.

It assumes that obtaining happiness was the overall goal. We become good people and obtain happiness through practice. In other words by being honest, brave, generous, etc.

The Symposium (385-370BC) is a philosophical text written by Plato that is well worth reading if you have a keen interest in Greek Philosophers. It is set at a drinking party and discusses and analyses the then view of homoeroticism and drinking alcohol.

This may not be such a thought-provoking text as Plato’s Republic or Phaedo. However it is nice introductory reading and it is praised just as much for its wit, humour, and literary merit, as it is for its philosophical observations.

Plato’s most famous work then is the Republic. This book, written in 375 BC is more political in nature. Plato critiques the Ancient Greek state’s approach to democracy.

It essentially revolves around one philosophical question: is it always better to be just than unjust? It discusses the optimum approach/actions that should be taken by both the common man and the state.

The third and final member of the trilogy of the greatest Greek Philosophers? Aristotle.

Aristotle was born in Stagira and was taught philosophy by Pluto. He, like his predecessors, is still considered to be one of the best intellectual figures in western history.

Aristotle was so revered that he later went on to teach the young Macedonian King Alexander the Great. He explored a diverse array of topics far beyond the reach of typical philosophy.

Aristotle dabbled in studies of biology, botany, chemistry, psychology, metaphysics, physics, zoology, and countless other fields. He was essentially both a Scientist and Philosopher.

Aristotle founded the aforementioned Lyceum whose ruins can be found in central Athens today. The school was surrounded by dense, fragrant olive groves and Aristotle became known for wandering in their midst, reflecting on his thoughts, between teachings.

As such, he, the school, and its students became locally referred to as “Peripatetics”. This stems from the Ancient Greek “peri” – around and “patein” – to walk.

Pythagoras may be a familiar name from your high school maths class. In fact, one thing that Pythagoras was particularly famous for was his mathematical theorem.

Today, this remains one of the most important theories in geometry. It basically states that the square of the hypotenuse is equal to the sum of the squares of the other two sides of a triangle.

But maths aside, Pythagoras is credited with various philosophical and scientific findings. It is widely believed that he was one of the very first scholars to pose the idea that the earth was round.

In some ways, Pythagoras’ philosophical outlook could be compared to those of Buddhist monks. He believed that all animals and living things were important and thus, we should be kind to all.

He also believed in reincarnation. Pythagoras preceded Socrates and his studies were markedly different from the Socrates – Plato – Aristotle body of work.

Plotinus was a post-Socratic Greek philosopher. Philosophers in this era tended to focus their studies, questions, and debates, on individuals as opposed to politics and questions to the state.

Plotinus is particularly interesting because he was a Greek philosopher born in Roman ruled Ancient Egypt. He was born in Lycopolis in 205AD and is credited with being the founder of the Neoplatonic school of philosophy.

This was the first school of thought to really rival the ideologies of Christianity. He moved from Egypt to Rome where he was widely respected and revered.

Plotinus did not start writing about his philosophical thoughts until he was 50. Then, they were published posthumously by one of his pupils: Porphyry.

Plotinus’ main works were the Enneads. These were six groups of nine essays. They discussed a variety of topics from physics, the cosmos, psychology, and logic.

If this article on Greek Philosophers has left you inspired to learn more about Greece, you may be interested in discovering some interesting facts about Greece. Alternatively, you may enjoy learning what Greece is famous for.