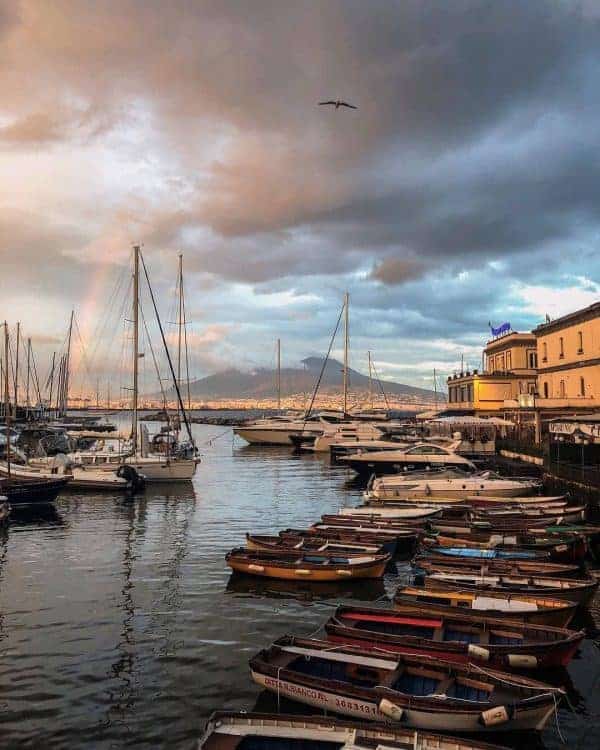 “Is Naples safe?” When you have spent a lot of time in Naples, it is easy to answer that question with a resounding yes.

However, unfortunately, Naples has a less than stellar reputation. As such, the question “Is Naples safe?” is the first thing on peoples lips if you should ever so much as mention that you are considering taking a trip here.

In this article, I’ll go into all the whats and whys, and the precautions that you need to take while travelling in Naples. This way you can ensure that your Italian vacation is fun-filled and trouble-free.

Raw. Gritty. Bursting with attitude. Naples is an Italian city that is simply overflowing with character and personality.

In Naples, narrow, graffiti-filled alleyways open out into crowded piazzas that are teeming with life. Locals folk dance until 5 am amid the crumbling ruins of Roman buildings, and dark, dimly lit streets lead you towards unexpectedly sophisticated wine bars. Naples is a real diamond in the rough.

Every time I think about Naples’ bad reputation I feel a little sad. However, at the same time, I go on to appreciate the fact that this underrated edgy city has escaped the eyes and the footprints of most international travellers as a result.

Several decades ago, “See Naples and die” was a phrase attributed to travelling to Napoli. This tagline was given on account of just how good the food was in Naples.

You’d see Naples, stuff your face, and just die from a foodgasm. (Okay let’s all admit that that was a pretty weird phrase).

Nowadays, that same phrase has taken on a more sinister turn. Why? Because of this presumption that Naples is a dangerous, treacherous no-go zone.

Naples: The Most Dangerous City in Italy?

Naples has a few bad titles. It has been nicknamed the murder capital of Europe. It’s considered as being Italy’s most dangerous city.

The sheer mention of Naples is synonymous with the Mafia. Does that mean that all Naples residents are gun-wielding Mafia crime bosses? Far from it.

Why should you trust my opinion on the safety of Naples? I am not just someone who went to Naples once on holiday, took a few photos, felt safe, and returned home.

I lived in Naples. During that time, I dated a Neapolitan guy.

No, he was not a Mafia baron, and no, we didn’t have a Bonnie and Clyde-style relationship!

I spent many a night drinking, eating, and laughing in crowded Neapolitan bars, restaurants, and pizzerias. I am of Italian descent and wanted to visit the places in Italy my family came from.

Sometimes I even did the unthinkable and walked home alone. If Naples is as dangerous as the naysayers would have you believe, I sincerely doubt that I’d still be here writing this article.

Is Naples Safe?
Looking at the Question in Context

Have you ever noticed that people are always saying that Naples is not safe, but they don’t provide any additional context? Precisely why is it unsafe? What is going to happen if you should be so bold as to dare to venture there?

Will you get raped? Bombed? Eaten by wolves?

Kidnapped by a Mafia thug and forced to serve as a Drug Lord? What?

I’m presuming that if you confront these naysayers, the majority of them have nothing useful to contribute to answering the question of whether Naples is safe. They will go on to shuffle away and return to going about their day.

“My friend of a friend got robbed/attacked/mugged”

Even if these anecdotes did happen, it does not provide much information. You could just as easily be robbed in London, or Paris or Madrid.

Perhaps Dave was walking around a sketchy neighbourhood at 3 am with an expensive camera hanging around his neck. Perhaps Dave just ran into bad luck.

Regardless, if you listened to every bad thing you heard about everything ever, you would never leave the house. Trust me when I tell you, Naples is very worthy of your time and attention as a travel destination. Once again: yes, Naples is safe.

Looking at the Statistics

The safety statistics for travelling to Naples pretty much speak for themselves. According to the Numbeo criminality index, Naples ranks as number 66.

There are a significant amount of American cities that outrank Naples in terms of crime levels and danger ratings. However, people seldom terrify themselves out of travelling to the USA!

Similarly, the Italian authorities themselves state that crime is worse in Rome and Milan than it is in Naples. Interesting, eh?

So what is the big, terrifying thing that people are so afraid of in Naples? It seems to broil down to two things: 1. Petty crime and 2. The Mafia.

Petty crime is the main safety issue that poses a threat for visitors to Naples. Again though, let me reiterate that I lived in Naples for a relatively long time and never experienced any issues. I never got mugged, nor did I encounter anyone who had.

Bag snatchings are common in Naples, as is pick-pocketing. Criminals have been known to grab the handles off of someone’s backpack while speeding by on a vespa.

The solution for avoiding this? Common sense!

If you take basic precautions, you will be completely fine in Naples, just like I was. A few safety suggestions are:

What About the Mafia?

First thing’s first: yes the Mafia does still exist in Naples. The “Camorra” is the name of the Mafia that operates in this area and it is one of the largest groups in the country.

The Camorra has been in operation for over 400 years. While it’s unfortunate that the Mafia does still cause all manner of problems for local businesses, they are extremely unlikely to take any notice of tourists.

Think about it logically. If a Mafia boss is dealing with hundreds of thousands of dollars in organised crime, he isn’t going to waste his time pestering a tourist for a £400 camera, is he?

After a day or two in Naples, you will feel assured about this I’m sure. Mafia activity takes place behind the scenes. You will not encounter any problems.

Even if you got lost sightseeing, you wouldn’t find these “dangerous” areas because they are so far out. Considering that, there is no need to majorly freak yourself out if you get lost. Rest assured, you’re not going to walk into the midst of a gang turf war.

The area around Garibaldi station seems to have a constant police presence. There are many beggars that loiter inside the train station, many intimidating types selling fake designer handbags, and most of the reports of petty crime happen here.

If you have travelled elsewhere in Italy, you will note that the area around the train station is often the most sketchy. This is the case even in Sicily, Rome or Milan.

There are a lot of cheap accommodation options situated around Garibaldi. If you’re constantly aware of your surroundings, you will be completely fine.

However, you should try to avoid this area if you can. It will not be the most magical Naples experience.

Quartieri Spagnoli and Museo are both neighbourhoods that are generally fine. Yet in both places, you should be careful when walking at night.

Is Naples Safe?
Safety Advice for Visiting the Campania Capital

We have already touched on some of the precautions that you need to take when travelling in Naples in order to minimise your chances of being the victim of petty crime. Some additional considerations are detailed below.

Most of these things are common sense, travel safety tips. They are good practice when travelling anywhere. Yet considering Naples’ reputation, it is worth reiterating them.

If you travel to Naples feeling super paranoid and anxious that something is going to happen to you, it’s going to ruin your experience. Not only will you not appreciate what’s going on around you because you are always tiptoeing around or looking back over your shoulder, if you start acting shifty or nervous, you will make yourself more of a target.

Just forget everything negative you have ever heard about Naples and concentrate on the important things. For instance, where to find the best pizza!

Wherever you travel, always walk like you know where you are going – even if you don’t. If you walk with confidence, people are more likely to think that you are a local or that you know the area well. As such, they are less likely to bother you.

If you do happen to get lost in Naples, try and be discreet about it. For instance, don’t unfold giant maps in the middle of sketchy alleys and frantically look around.

If you have a clear plan of where you want to go, and what you want to do in Naples it will help a lot. Firstly, your time management will be better.

Secondly, if you’ve done your research and have a rough understanding of where the main sights are and how to get from A to B, you minimize your chances of getting lost or running into problems.

Arriving to a new travel destination at night always makes the experience more stressful. For one thing, it’s much more difficult to find addresses and accommodations in the darkness.

For another, there are heightened safety concerns in certain areas. This is not just specific to Naples but rings true of anywhere you may travel.

If you can, try and ensure that you arrive in Naples during daylight hours. Review your options and transport routes in advance so that you know how to get to your hotel/Airbnb.

Carry a Business Card From Your Hotel

In case you should happen to get lost or run into any problems, always carry the business card from your hotel. Store their details into your phone.

This also helps should you happen to need a cab. English is not so widely spoken in Southern Italy so if you need a cab, you can simply show the driver your card.

No travel experience is fun if you are constantly looking over your shoulder and the same can be said of travelling in Naples. Have fun, relax, and enjoy yourself. You’re travelling through Italy to have a break after all, not to feel as stressed out as you do while you’re at the office!

Still plagued about the question “Is Naples Safe?” Feel free to reach out to me via email, or drop me a comment below.

I lived in Naples while teaching English in Italy and got to know the city very well. You may also want to consider taking trips out to the gorgeous nearby islands of Procida, Ischia, and Capri while you are in the area!