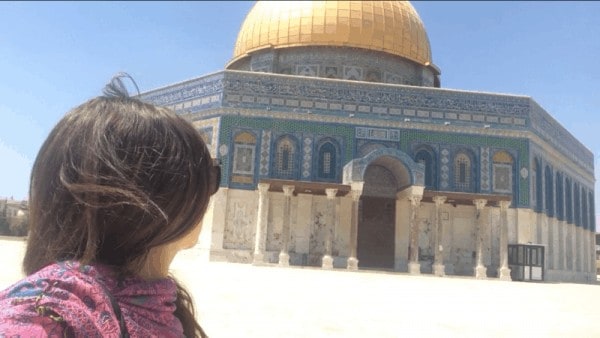 Speeding westwards and leaving the trendy modern city of Tel Aviv behind in our dust, my bus bypassed kibbutzes and small Israeli settlements before drawing to a halt at Damascus Gate, one of the ancient entrances to the “Old City” of Jerusalem which still functions as a main point of entry to this day.

A far cry to the urban sprawl I’d left behind, the trendy coffee bars that inhabit Tel Aviv’s boulevards had been replaced with ramshackle eateries selling halal meats, Turkish baklava and Arabic mint tea; the chic boutiques traded in for spice and fabric markets from which local vendors yelled out about their wares – each claiming to offer better quality and value than he who came before. Arriving in Jerusalem was like stepping back in time, or crossing the border into a completely new country. As I passed through the crumbling stone arches of Damascus gate, the time warp continued.

Once you enter the old city, it’s easy to get lost among the labyrinth of winding alleyways and bustling souks within. Owing to its significance in each of the main monotheistic religions, the old city is divided into four separate sections based on the predominant belief in that neighborhood – The Islamic quarter, The Jewish Quarter, The Christian Quarter, and the Armenian Quarter.

From Damascus Gate, one will find themselves on the approach to the Muslim Quarter – the mysterious scent of frankincense lingers in the air and glistening in the distance beneath the Middle Eastern sun awaits the Dome of the Rock – the iconic sight that you see depicted in many an image of Jerusalem and the religious structure which marks the epicenter of the city’s Islamic quarter.

I entered the Temple Mount through the Bab-al-Silsila, as many pilgrims had done previously. The atmosphere was tense – armed Israeli military and sniffer dogs occupied almost every corner on the approach to the entrance, all those that entered had to pass through an explosives detector and have their pockets, bags, and person checked thoroughly before entry was granted reminding each that you are never too far from potential conflict in this part of the World.

Once inside the Temple Mount, the atmosphere had changed drastically to one of peace and serenity. Cyprus trees, floral displays and water fountains occupied the grounds around the beautiful Dome of the rock. Unfortunately, as a non Muslim I was not allowed inside, but I stood back and admired the elaborate decorations, and the colourful structure before passing back through the souks, and re-entering the heart of Jerusalem’s old city.

The Christian and Armenian districts of the city almost blended into one. It was difficult to determine where one started and the other ended. The ancient cobbled streets in this area mark the route where Jesus is believed to have walked on his final journey towards crucifixion.

Copper signs displaying Roman numerals mark the point where notable scenes from the Bible took place. A stone said to be the one which Jesus rested upon while struggling to balance the cross on his back, lies behind protective casing, having acquired an almost super-natural appearance with a handprint now visible in the stone as a result of generations of devout Christians wanting to touch it to become closer to Jesus.

As I follow the route towards the Church of the Holy Sepulchre which now stands over the site where Jesus is believed to have been crucified, I have to step aside from time to time to make way for Ethiopian Christians carrying crucifixes, and following the same path as their savior.

Whether you are religious or not, Jerusalem is certainly an interesting city since it holds so much significance in the eyes of many religions. At the wailing wall, Orthodox and Conservative Jews crammed their wishes and prayers into small crevices present on the ancient structure, talking, crying, and praying as they do so.  Some people found it difficult to contain their emotions, having finally arrived at the places that they had learned of and hoped to visit their whole lives through.

The predominant reason that Jerusalem appears in the Western media is to notify us that there has been a clash of sorts – perhaps religious, or political. Certainly, the presence of so many Israeli military men on the streets here make for a tense atmosphere, but what the media tends to forget to acknowledge is that Jerusalem is a city of regular people living their lives like you and I, much like any other place in the World.

The fact that so many extremely religious people with opposing views coexist so peacefully alongside each other may come as something of a surprise, but provides a good role model for the rest of the world, and brings hope to the ideology that one day Israel and Palestine can also peacefully cohabit and reconcile.


Looking for accommodation inspiration? Take a look at this handy guide on where to stay in Jerusalem.