This Azerbaijan itinerary is the perfect way to see the best that this mysterious nation has to offer in a short space of time. From the glistening capital of Baku on the shores of the Caspian sea, to isolated villages nestled high in the mountains that give a unique insight into local life. 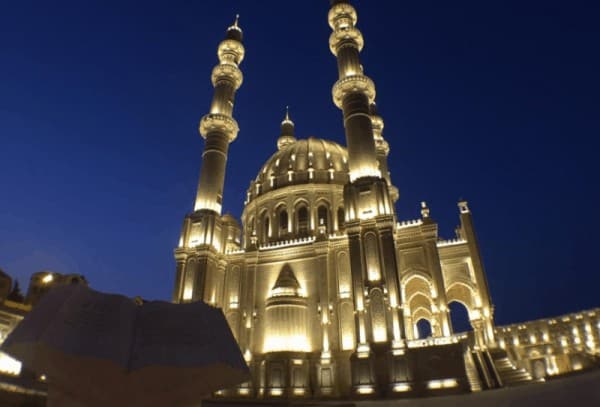 Start your Azerbaijan Itinerary in the glitzy capital of Baku. Baku is poised to become the new Dubai and that certainly makes sense – the beautiful Middle Eastern style architecture, the luxury boutique stores and the rich food culture make it a perfect alternative weekend getaway destination.

Baku is a unique blend of old meets new, and East meets West. Though Baku (and Azerbaijan in general) identifies itself as Muslim, the country is mostly secular and few people practice the religion. In Baku, you will see the unmistakable outline of mosque minarets peeking out above the skyline but you won’t hear any calls to prayer and you won’t see anyone sporting headscarves. Baku has a vibrant and active nightlife scene and it feels almost like another European capital.

Things to do in Baku

Learn the Meaning Behind the Name “Land of Fire”

Azerbaijan is known as the land of fire. That isn’t just because that’s a cool name to have but because it is literally the land of fire. A short bus journey from the centre of Baku brings you to Ateshgah Temple of Eternal Fire. The torches here are constantly alight. Why? Because of natural gases escaping from the earth and reacting with the atmosphere. The temple has been used by Zoroastrian fire worshipers, Sikhs and Hindus over the years.

Similarly, you can take a cab to Yanar Dag (burning mountain) where the mountain is perpetually on fire. Legend has it that a shepherd tossed away a cigarette and the mountain has been alight ever since. Yanar Dag is surrounded by farmland, and the area offers some nice walking trails through the countryside.

The Azeris love their tea and the culture of drinking this is quite similar to that which you can find while travelling in Turkey or Iran. The typical “chai” is a spiced black tea commonly served with cubes of sugar, and slices of lemon for flavouring. Tea rooms can be found at every twist and turn throughout the old town. I fell in love with the Old Baku Tea House. The place is dimly lit, and the Arabian style coloured glass windows and decorations make for an inviting atmosphere where you can just relax and unwind. This is also a great place for people watching, as you can witness many of the local men renting booths and participating in a game of backgammon here.

Explore the Old Town of Baku

Old Town Baku (İçərişəhər) is a UNESCO protected world heritage site with routes stemming back as far as the 12th century. The maiden’s tower is arguably one of the most iconic structures here. For 5 manat you can also visit the palace of the Shirvanshahs – a beautiful sandstone palace where the Shirvanshahs (the ruling dynasty of Azerbaijan during the Middle Ages) once lived.

Until 1991, Azerbaijan was a part of the Soviet Union. Since the country has received its freedom and independence, changes have been made to move away from the unsightly Soviet style architecture, to more contemporary, attractive and modern buildings. The perfect example of that is the Heydar Aliyev Centre. Created by Zaha Hadid’s company, this structure has become something of an icon of Azerbaijan. Inside (entry 15 manat), there are exhibitions showcasing the best of Azerbaijani history, culture, art and crafts.

The flame towers are among the most striking buildings in the Baku skyline. They contain offices, apartments, hotels and shopping but unfortunately they do not have an observation deck. For 23p (yes you read that correctly – 23p!) You can take a funicular to Dağüstü Park which is by these buildings.

From here, you have an incredible panorama of the Caspian sea and the city of Baku below you. Next to the flame towers is an ancient, centuries old mosque which shows a perfect contrast of how the city has grown, developed and modernised over the years.

A visit to Qobustan to see the ancient petroglyphs and the mud volcanoes is a highlight to any Azerbaijan itinerary.

The collection of petroglyphs (caveman carvings) at Qobustan national park is one of the largest in the world. Some of these date back over 40,000 years and it’s fascinating to see the details given the fact that carving tools and resources at the time were limited.

Qobustan is also home to over one third of the world’s mud volcanoes which are a weird and unique sight to behold. These phenomena are caused when there is a weakness in the ground. I have already written an article about travelling to Qobustan so I won’t go into too much detail here. 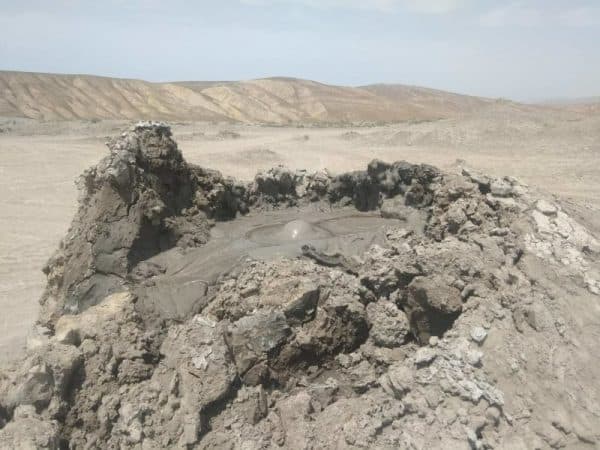 Nestled high above the clouds in the mountains of central Azerbaijan awaits the cobbled streets and craftsman workshops of the quaint country village of Lahic. The village of Lahic was an important stopping point on the silk road trade route in the days of the camel caravans. The residents of Lahic were skilled in carpet weaving and copper crafts and products made here fetched high prices in Baghdad bazaars.

The Azeri government have worked to protect the cultural heritage of Lahic and many of the craft workshops are still in operation today, having been passed down through the generations for centuries. There are several comfy country style hotels in Lahic but you also have the option of participating in a homestay and living among an Azeri family for a while.

Because Lahic has been so isolated for centuries, the villagers here do not speak Azeri or Russian, but Tat – a local dialect that is spoken only here and is quite similar to Iranian Farsi.

You can get to Lahic via marshrutka from Baku. The journey takes around 4 hours.

If you opt to hire a driver or your own transport, you can also consider stopping by Shamakhi on your way to Lahic to see what remains of the old Shirvan capital – the Juma mosque and the citadel walls. Shamakhi is also famous for Azeri wine and cheese production and you can find places to partake in a tasting here.

Sheki is often overlooked as a stopping point on Azerbaijan itineraries but it is perhaps the most tourist friendly place in the entire country. Like Lahic, Sheki was also a stopping point for silk road traders.

Things to do in Sheki

Sleep in an Old Caravansary

One of the highlights of being here for me was the chance to stay at the Caravansary hotel. This hotel is exactly as the name suggests – it is actually an old caravansery where silk road traders would stay with their camels on their long journeys to source exotic wares from across Arabia and Central Asia. A stay here is more for the experience than it is for the luxury. The rooms here are pretty bare bones and you sleep inside a cave room lit by candlelight. The original fireplaces are still carved into the walls.

Note: If you want to stay at the Caravansary hotel, they are not listed on booking.com or other online hotel sites. You can contact them via their Facebook page here (though they never responded to me when I reached out several times) or contact them via the number listed on their website. I just rocked up at the hotel and hoped for the best and was fortunate to find a room. I paid 20 manat (circa £8) for a single room. I think that the prices can vary depending on the season. I travelled during shoulder season (May) but you may see an increase in the height of summer.

Don’t miss the ruins of the old fortress and the palace of the Sheki Khans. I would also recommend taking a day trip to Kish, a small village 4km away from Sheki. Kish is still very much a traditional village – you can expect to see the locals wearing the traditional national dress, and women fetching water in guyum.
The main attraction of Kish is the Albanian church. The church is one of the oldest in the Caucasus region and has nothing to do with the actual country of Albania, but with a mysterious race of people known as Caucasian Albanians who once lived in the region.
You can take a bus to Kish, or if you enjoy hiking, it’s possible to walk there from Sheki within a couple of hours.

Azerbaijan Itinerary Day Seven:
Back to Baku or Onwards to Georgia

If you are perhaps travelling the Caucasus region or treading the silk road, you can easily cross into Georgia from Sheki, you just need to take a Marshrutka to Balaken. I have written all about the process of crossing the border between Azerbaijan and Georgia.

Alternatively, you can take a Marshrutka back to Baku from here. The journey takes around 6 hours.

Any questions about my Azerbaijan itinerary or concerns about travelling in Azerbaijan? Feel free to reach out to me or let me know in the comments below.