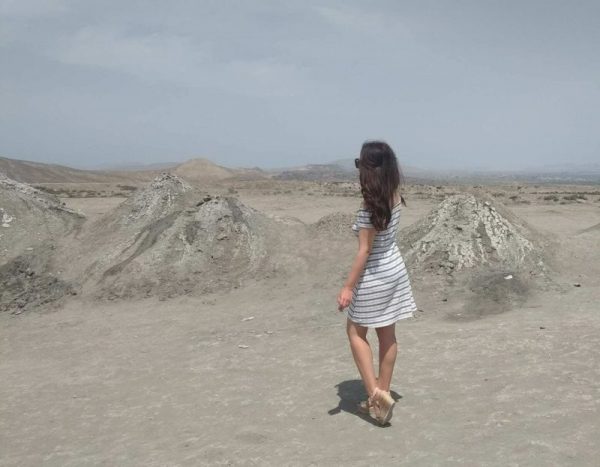 Taking a day trip to Qobustan has been one of the highlights of my trip to Azerbaijan so far. The things that you can see in Qobustan are completely unique and you cannot find anything like this anywhere else in the world.

The Trip From Baku to Qobustan

Getting to Qobustan from Baku is not an easy feat and requires a little planning (more on that below). Fortunately I met another solo traveller at my hotel who was interested in joining me on the trip so we were able to split the travel costs.

What to See in Qobustan

There are two main attractions in Qobustan – the petroglyphs (ancient cave paintings dating back to the times of prehistoric man), and the mud volcanoes. The town itself is nothing really of note, but if your time in Azerbaijan is short, a brief wander through the streets can be an interesting experience. Qobustan has a completely different feel to it than Baku. From the glitzy, modern architecture of Baku, arriving here is something of a culture shock. The town is filled with dusty roads and Soviet style tower blocks. It makes you question if you are still in the same country.

“Petroglyphs” is a funny old word that I had never heard of before, and you may not have either. The word “petroglyphs” actually comes from ancient Greek. “Petros” meaning stone, and “glyphein” meaning to carve.

In simple man’s terminology, Petroglyphs are caveman engravings that have been carved into caves and stones. The collection here at Qobustan is the largest of its kind in the world and the petroglyphs date back over 40,000 years to the time of the ice age. The site here at Qobustan is a UNESCO protected world heritage site.

The fascinating thing is observing some of the detail on the petroglyphs and wondering how these were created during a time when people had very few tools and resources.

The Petroglyphs depict scenes of prehistoric life such as tribal dances (it is presumed that they did this in preparation for a hunt) and hunting for animals.  Earthquakes have led to the national park looking so higgledy-piggledy with rocks seemingly strewn all over the place, but many of the caves here (where ancient man once lived) are still standing today. Some of the groupings of rocks are actually ancient burial mounds.

I would recommend going into the museum before visiting the petroglyph site as it gives you a lot of information about what the carvings actually mean, as well as the (presumed) process for creating the petroglyphs and a collection or artefacts from the region.

The petroglyph site itself isn’t very well sign posted. As in, this is just a really huge field of rocks and you are just wandering around trying to find things. There are no information plaques next to any of the images either so you may be looking on at a group of squiggles but you have no information about what the squiggles are thought to represent, or when the squiggles were carved. Damn those squiggles!

As I said, the tourism infrastructure in Azerbaijan isn’t quite there yet, but it’s great to see the petroglyphs all the same, even if finding the images requires a little “Where’s Waldo” style detective work.

Admission Fee: 4 Azeri Manat per person (£1.70) including the museum and the national park site.

Our Baku Cab Driver stopped at a roundabout on the outskirts of Gobustan and gestured for us to get out of the car. A cheery, portly man approached and indicated that we should follow. I looked from our nice little Mercedes cab to this obscure, mud laden car that he was gesturing us towards. The car looked about 50 years old! “It’s designed for Off-Roading” our Baku Driver claimed in a matter of fact way, which is hilarious if you look at the thing. We got into the car anyway. Since the Qobustan cabs were absolutely splattered with mud, we got that our Cabbie didn’t want his Mercedes suffering the same fate.

The short journey from the roundabout to the volcanoes was like something from a comedy sketch. There were no seat belts in the car and the fact that the ride was so bumpy meant being thrown from left to right. With every lurch, the driver let out a completely different unique sound. 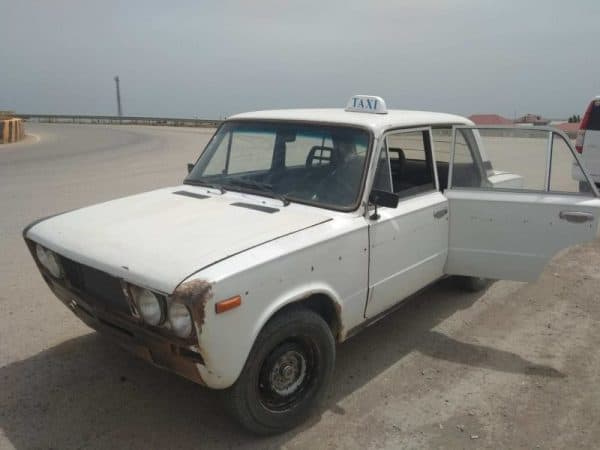 It was as though he was taking the ride for the very first time, not on one of several laps for the day.

Every now and then, he would get out of the car and go to pour water in the tank, or the car would get stuck in the mud so he would totter off to give it a quick shove. He did it all while smiling, laughing, and talking in an animated fashion even though we didn’t have a clue what he was saying.

Arriving at the Gobustan Mud Volcanoes

The mud volcanoes are pretty fascinating. I had never even heard of such a thing before I travelled to Azerbaijan but over 50% of the world’s mud volcanoes are located here. Mud volcanoes can be formed when gases below the surface of the earth find a weakness in the ground.

The scenery while wandering around the Gobustan desert and looking at these mud volcanoes felt like walking on the moon. Little gargling and bubbling noises can be heard from the craters and every now and then, one of them would “erupt”, splurting out thick, gooey mud. Occasionally the explosion would be bigger than the usual dribble, absolutely drenching an unsuspecting tourists in mud.

What you may not expect, was that the mud was actually ice cold. By contrast, the heat of the desert meant that the mud  solidified and cracked in a matter of seconds before one’s eyes.

An Azeri local told me that the mud here is good for your skin, so I scooped a bottle of it up and gave myself a volcanic facemask later that day. It was actually really nice!

You may discover that locals are sitting or soaking their legs in some of the craters but you have to be really careful. Some of the mud volcanoes are Qobustan are bottomless, meaning that you would just drown instantly (and some travellers have). I heard that there used to be caution signs scattered around the desert here but the Cab Drivers threw them all away so as not to scare tourists. Just be cautious!

Admission Fee: None! The mud volcanoes are a gift from mother nature!

How to Get From Baku to Qobustan

This is the tricky part. Something that I quickly learned about travelling in Azerbaijan is that although the country is all for welcoming international tourists, the infrastructure isn’t really in place yet. There are so many awesome places to visit in Azerbaijan, however due to the lack of convenient public transport options and information for tourists, getting around can be a headache.

#1 Take a Day Tour from Baku to Qobustan

One option is to take a tour. There are many reputable tour companies that run daily tours to and from Qobustan, stopping by the mud volcanoes and the national park for the petroglyphs. The only problem is that the tours can be pricey, especially if travelling alone.

I made some enquiries with Bag Baku who seem to be a pretty reputable company. The tour runs daily provided there is demand, and the price decreases depending on how many people sign up. They quoted 130 manat for one person (ouch!) But if 5-6 people sign up, this is reduced to 60 manat which isn’t bad really, considering that you have a tour guide included with the price. This price doesn’t include admission fees however.

Travelling to Gobustan by bus is not that simple since you need to make a couple of connections. However if you may prefer this route, I’ve outlined it out below.

You will need to take a cab to visit the Petroglyphs and the mud volcanoes from Gobustan. Though the metro and bus combo is cheap (approximately 1 Manat for all of those buses and trains!), it can be difficult to communicate since most people here do not speak English. If you cannot speak Russian or Azeri, try to use Google translate on your phone or show a picture of the petroglyphs to show the driver where you want to go.

You could hire a driver to take you from Baku to Qobustan. This is the route that I chose and I was happy with my decision. I paid 45 manat for a return trip.

Once you arrive in Qobustan, you will notice heaps of cab drivers sitting around at the roundabout in the town, and outside the petroglyph museum, who will offer to take you to the mud volcanoes. I have read other bloggers saying that they paid around 20 manat. I paid 10 manat but I was fortunate that my cab driver from Baku helped me to negotiate the price. To be honest, it takes just a few minutes to get to the mud volcanoes so I would push for this price point. Getting to the mud volcanoes requires going off road across sludgy, dirty desert plains so it’s likely that Baku cabbies will not be willing to get their cars dirty (plus they probably don’t know where the mud volcanoes are!) So don’t be alarmed if you have to change drivers.

Side Note: it should also be noted that Qobustan is actually pronounced as “Gobustan”, so make the “G” sound heard otherwise the cab or bus drivers might not know what you are talking about!

Total cost for the day: 45 Manat roundtrip from Baku to Qobustan (I was pretty pleased with this price, especially since the driver waited around for us, even when we stopped to grab lunch on the way back. He also stopped at Yanar Dag burning mountain on the return trip)

Have you travelled to Qobustan? Any difficulties or tips for other travellers on how to get from Baku to Qobustan? Let me know in the comments below.

2 thoughts on “Traveling to Gobustan: Mud Volcanoes and Ancient Petroglyphs”