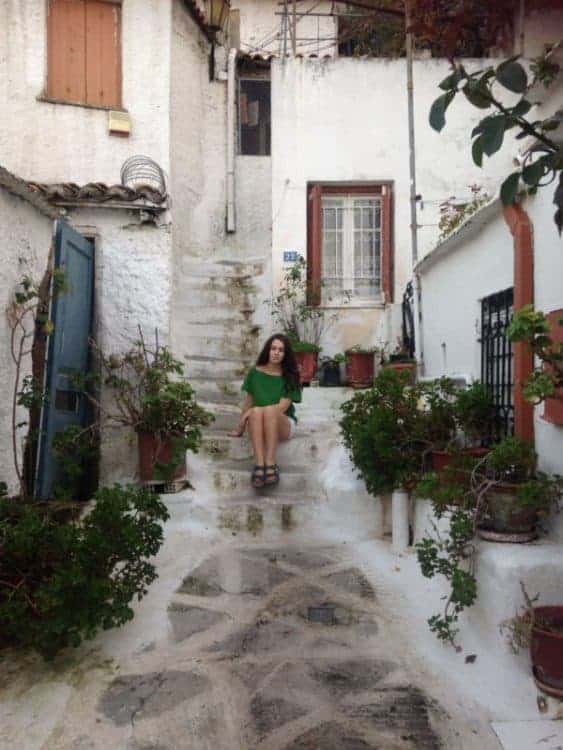 Anafiotika Athens is a highlight of any trip to the Greek capital. However very few tourists are aware of its existence.

Perched precariously on the slopes of Acropolis hill, this district is a tranquil oasis in the bustling heart of downtown Athens. Anafiotika is characterised by its blue and white Cycladic houses, narrow passageways, and centuries-old Orthodox churches.

The architecture here is more reminiscent of Santorini than central Athens. Anafiotika awaits at the top of an unsuspecting alleyway that leads upwards from Plaka. This is one of the Greek capital’s best secret sites.

Falling in love with Anafiotika

Although Anafiotika sits beneath Athens’ most famous tourist attraction, it remains relatively undiscovered. You may find the occasional guidebook wielding tourists up here.

However, for the most part, Anafiotika is somewhere that you would never stumble across unless you specifically knew what you were looking for. There are no shops telling tourist tat or over-priced restaurants here.

Locals greet you with a “Kalimera” as they tend their gardens water the fragrant flower beds, and feed the many stray cats that roam the streets of Athens. Anafiotika is a strictly residential neighborhood.

A little history of Anafiotika Athens

Anafiotika Athens has a fascinating history behind it. This district is only a few hundred years old.

Following Greece’s newfound independence from the Ottoman Empire in the 1800s, King Otto I wanted to rebuild Athens into a modern, metropolitan Greek capital.

He requested that skilled workers and tradesmen from around the country travelled to Athens to assist him. Many of those who moved were builders and carpenters from Anafi, a small island in the Cyclades.

The settlers from Anafi took up residence on the rocky ridges surrounding the Acropolis and built their village in the quintessential Greek island style. The village’s name “Anafiotika” means “little Anafi”.

Some of the houses that occupy Anafiotika are somewhat ramshackle in appearance. This is due to the hasty way in which they were built.

Despite Greece’s newfound independence in the 1800s, Athens was still under Ottoman law when the islanders arrived. One of the active laws stated that people could build houses wherever they liked.

The only caveat was that the structure had to be built between sunset and sunrise. So, Anafi citizens hurriedly built their houses at night before the law was abolished,

It is most unfortunate that what remains of Anafiotika today is a small portion of the original neighborhood. Archaeological excavations around the Acropolis meant that many of the houses and streets here were destroyed.

Approximately 45 houses remain in Anafiotika today. A lot of them are occupied by relatives of the original settlers. Others have been converted into guesthouses.

The Acropolis and the various Greco-Roman ruins that are scattered around the Greek capital are considered as being the main historical highlights of Athens. However, Greek history is much more diverse and fascinating than initially meets the eye.

The more recent history of Greece is just as interesting as the ancient. Anafiotika is one such example of that.

What to do in Anafiotika, Athens

Anafiotika is a worthy stopping point on any Athens itinerary. Take the time to really admire the island architecture, and squeeze through the narrow cobbled passageways that connect the houses and streets. These alleyways are often only wide enough for one person to squeeze through sideways.

Anafiotika offers some of the best viewpoints in all of Athens. From up here, you can gaze across the red roof tiles of downtown Athens and out to Mount Lycabettus.

Visit Anafiotika as the sun begins to set for perfect photo opportunities sans tourists. The view is almost ethereal as the skies are illuminated in hues of red and orange.

Both sites are still operational today and date back to the 17th century. Their interiors are filled with bright, vibrant frescoes that beautifully depict various scenes from the Orthodox faith.

Agios Georgios tou Vrachou is considered as being one of the most beautiful churches in Athens. There is also a small memorial garden nearby.

The garden is dedicated to a Greek guard who died during the second world war. When the Germans invaded Athens, he wrapped himself in the Greek flag and leaped from the crumbling walls surrounding the Parthenon.

The Church of Agios Symeon

The church of Agios Symeon sits at the western edge of Anafiotlika. This beautiful structure was built as a replica of a church in Anafi.

A statue of the Virgin Mary stands proud inside the church. The statue inside the original church is said to have performed various miracles.

Browse the exhibits of the Kanellopoulou museum

The Kanellopoulou museum awaits at the topmost point of Anafiotika. This is arguably one of the most underrated museums in Athens.

Housed inside a stunning neoclassical mansion, the museum contains over 6,000 archaeological finds from Ancient Greece. The items on display here were part of a private collection owned by Paul and Alexandra Kanellopoulos who donated them to the Greek state after their passing.

You can find two beautiful Athenian restaurants at the foot of the stairs that lead up to Anafiotika. Both serve up sumptuous homemade Greek classic dishes.

Yiasemi is a homely restaurant on the border of Plaka and Anafiotika. It is set inside an old house on Mnisikleous street – the steep, narrow stairway that leads all the way up to the Acropolis.

The restaurant is popular among young Athenians who cosy up by the fireplace with a glass of oinomelo, or sit in the oversized armchairs for hours with a good book. You can find all of your favourite traditional dishes here. Everything from pastitsio and moussaka to fasolakia and saganaki grace the menu.

Anafiotika Cafe is an unsuspecting bar and restaurant that sits at the intersection of Mnisikleous and Thrasivoulou. Hidden behind a tiny wooden door, the cafe opens out into a huge outdoor courtyard.

The rooftop terrace boasts unparalleled views of the Acropolis by night. Meanwhile, the menu specialises in meze dishes.

Meze is the Greek answer to Spanish tapas. Order several plates for the table and share them among your travel companions.

Befriend the friendly cats of Anafiotika

Stray cats can be found virtually everywhere in Athens. Admittedly it can be sad to see cats without homes. But for the most part, they are taken care of by the people in their neighbourhoods.

At Anafiotika, look out for the adorable neighbourhood cats lounging beneath the sun. They can be found waltzing up and down the narrow passageways and relaxing in the windowsills.

How to get to Anafiotika from Athens

It is easy to walk right past Anafiotika unless you know where it is. From the touristy Plaka district, you must follow an almost sketchy looking, alleyway upwards towards the Acropolis.

There are in fact a number of ways to get to Anafiotika from Athens. However, the easiest method is to follow Vyronos Street.

From here, take a left turn onto Thespidos street and walk until you arrive at Stratonos. Proceed straight until you are met with the church of Agios Georgios tou Vrachou.

To make things easier, simply input the address for the Agios Georgios tou Vrachou church into your GPS tracker and follow the little marker. The address is Agios Georgios, Stratonos, Athina, 105 55-58.

It is easy to know when you arrive. You will be surrounded by beautiful island-style white houses.

A visit to Anafiotika is best combined with an exploration of nearby Plaka. Browse the stores that line Kydathineon Street, visit the bath of the winds, and Plaka’s other historical sites, and then ascend to Anafiotika village to watch the sunset.

From there, head to one of the traditional tavernas and bars that line the steps of Mnisikleous. Enjoy a glass of tsipouro to the backing noise of Zorbas dancing and plate smashing.

Have you visited Anafiotika? Do you have any concerns about how to get to Anafiotika from Athens?

Feel free to drop me a message below. For help choosing a place to stay in Athens, check out this Where to Stay in Athens Guide written by a local. Safe travels in Greece!

4 thoughts on “Anafiotika Athens: Your 2023 Guide to Athens’ Hidden District”