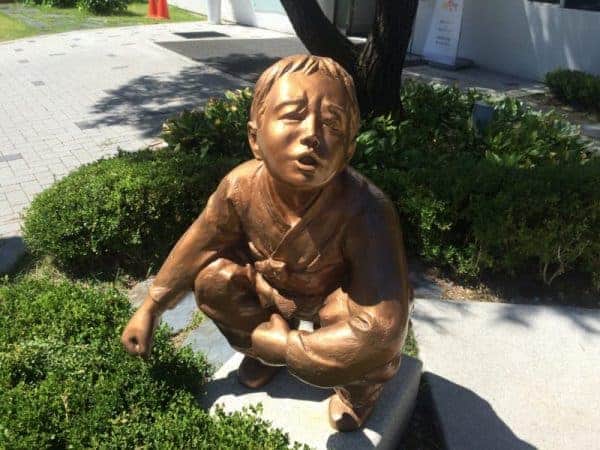 The Suwon Toilet museum is perhaps one of the most eccentric museums in all of South Korea. This place is also affectionately known as “Hae Woo Jae” or “Mr Toilet House”.

As the name suggests, the museum is dedicated to the beloved bathroom contraption: the toilet! A visit here is more for the comedy factor, as opposed to anything else. However, Hae Woo Jae exists to provide a cultural and educational experience.

A Little History Behind the Suwon Toilet Museum

The Suwon Toilet Museum is located on Yeongdong Expressway, on the outskirts of Suwon. It is the former residence of Mr Sim Jae Duck – the former Mayor of Suwon City. As South Korea prepared itself for hosting the 2002 Olympics, the country wanted to make sure that they supplied the rest of the world with a good impression about Korea.

Sim Jae Duck was tasked with “beautifying” public toilets across the country ready for Korea’s time in the spotlight. Thanks to him, toilets were no longer a place to just dump and er… Jump? They were now a place where one could relax whilst doing their business.

You can see many examples of Sim Jae’s work across Suwon. At the Hwaseong fortress for example, the public bathrooms play relaxing oriental music over the loudspeakers as you do your biz. Each cubicle has a glass panel wall that faces out to a private walled garden. Taking a number two has never been so pleasant!

The structure that houses the Suwon Toilet Museum today is just one giant toilet. Sim Jae Duck took his “bathroom beautification” assignment very seriously, and he enjoyed the project so much that he decided to knock down his family home of 30 years, and build a giant toilet to live in instead. Yeah…

The house was renamed to “Hae Woo Jae” – a word that stems from the Buddhist word for toilet “Haewooso”. “Haewooso” translates to meaning “a place to relieve your worries”. After Mr Duck passed away, his former home was opened to the public and his family created a garden filled with poo related statues in his memory… Maybe a nice wreath would have sufficed?

Stepping Inside the Suwon Toilet Museum

Visitors to the Suwon Toilet Museum can get around by following the yellow brick poo (No I’m serious…). The inside of the museum features a sequence of educational exhibits about the history of the toilet, and about Sim Jae Duck’s life. The former mayor was actually born inside a toilet so that may explain his lifelong obsession with the contraption!

Information cards about the various exhibits that you can see inside the Suwon Toilet museum are displayed in a number of languages including English and Korean. There’s also an exhibit that explains the digestive system and the importance of gut health that is targeted towards children.

One nice thing about South Korea is that toilets, bowel movements, and any related topic is not considered as embarrassing. As a matter of fact, poo symbols are actually considered lucky here!

Arguably the main highlight of the Suwon Toilet Museum is the sculpture garden that encompasses the toilet house. Many hilarious figures and sculptures are scattered between the beautiful pathways and flower beds.

The figures are squatting, showing pained expressions, or displaying thoughtful, pensive poses as they do their business. This makes for a great spot to get some photos, or strike some hilarious poses of yourself imitating the sculptures that you see.

Nearby Attractions in Suwon

While I do not necessarily think it’s worthwhile to trek all the way to Suwon specifically to visit Hae Woo Jae, the museum makes for an interesting addition to any Suwon day trip. Suwon can be reached easily from Seoul by taking the yellow Bundang subway line. Some other attractions that you  may want to consider while you are in the area are detailed below.

The UNESCO protected Suwon Hwaseong Fortress is a sprawling ancient complex that surrounds the city of Suwon. If there is one place that you absolutely must visit while in the area, it’s this.

The fortress was originally built by King Jeongjo in 1794. The purpose was to defend the city, and to house the remains of his father Crown Prince Jangheon. The fortress walls extend to almost 6km in length. Many of the old structures here are still intact – including the observation towers, bastions, command posts, and the gates at Paldalmun and Janganmun.

On certain days of the week, free cultural shows take place outside of the fortress such as traditional dances and musical performances. If you happen to be here in Autumn, you can catch the Suwon Hwaseong Cultural Festival.

Different areas of South Korea boast different regional foodie delicacies. In Suwon, the local dish is fried chicken. This is believed to be one of the best places in the country to indulge in a little Chi-Maek (치맥).

The Suwon Fried Chicken street runs next to the Hwaseong fortress and houses dozens of chicken restaurants that follow a local tradition. Here, the chicken is roasted in an iron pot (가마솥), rather than being fried the traditional way.

Jinmi Chicken (진미통닭) or Yongsung Chicken (용성통닭) are among the most beloved local favourites but be warned that the portions are fairly huge! What better way to enjoy a lunch break in Suwon after visiting the Suwon toilet museum?

Mural villages can be found all over Korea. These are former slums where the local residents have decided to “spruce up” their environment and decorate their streets and homes with graffiti and public art installations. Suwon’s Haenggung Dong Mural Village is a lesser-known art village that sits by the Hwaseong Fortress.

It’s worth taking a short stroll through the area to admire the local artwork, and enjoy a coffee or some traditional Korean tea in one of the quirky local places.

Ingyedong is Suwon’s primary nightlife and entertainment district. In some ways, the vibe here feels somewhat comparable to Seoul’s Hongdae neighbourhood – only without the crowds of international tourists.

The pedestrianised streets of Ingyedong are filled with bars, noraebang, galbi joints, and clubs that are open until the early hours of the morning. If you want to experience Suwon by evening, head here before taking the train back to Seoul from the nearby “Suwon town hall” station.

Getting to the Suwon Toilet Museum

It’s a little awkward to get to the Suwon Toilet Museum from downtown Suwon, or the Suwon Hwaseong fortress. You need to take a bus, and then walk for approximately 10 minutes. Be sure to download Naver maps so that  you don’t get lost!

A number of buses follow routes that run close to Hae Woo Jae. Hop on board any of the below services and then get off at Dongwon High School.

My personal recommendation would be to take a taxi, just for the ease of it. It’s approximately 10,000 KRW by cab  from Suwon Insadong, and 7,000 KRW from the Hwaseong fortress area.

Have any questions about visiting the Suwon Toilet Museum, or organising a South Korea itinerary in general? I spent two years living in Seoul. I would be happy to assist with any queries you may have. Feel free to drop me a comment below. Safe travels! Annyeong! Melissa xo

Note: High Heels and a Backpack is in no way affiliated with the Suwon Toilet Museum. This article was originally written on the 29th August 2016. It was last updated on the 30th September 2019.