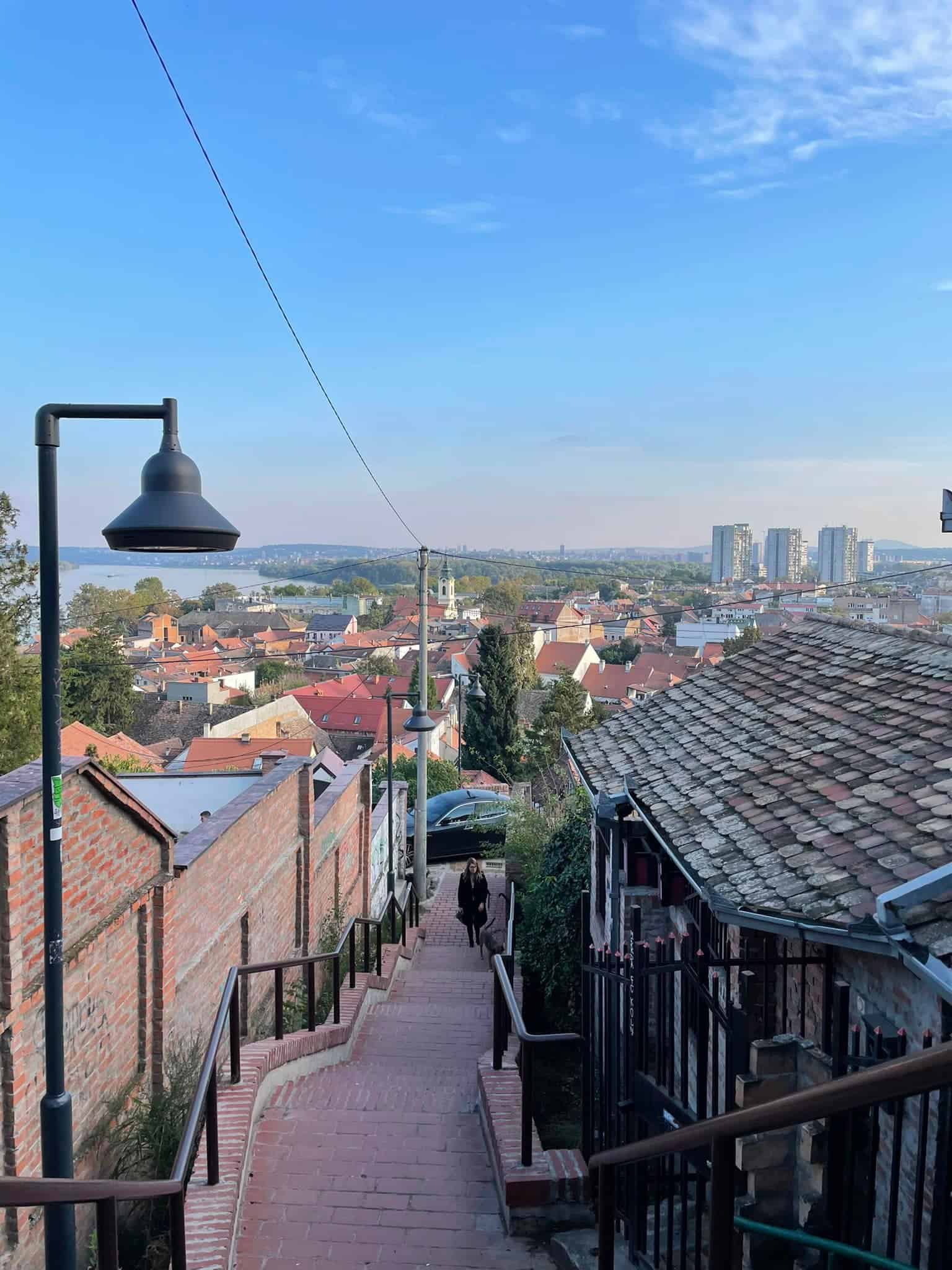 Zemun Serbia is an eclectic Bohemian district that can be found on the western side of the river Saba. It was inaugurated as part of Belgrade in 1934, but the atmosphere here is completely different from that of the Serbian capital.

Zemun residents are fiercely proud of their district’s heritage and culture and don’t especially like it when you refer to Zemun as being ¨just another¨ part of Belgrade. The architecture and ambiance are very different from those in central Belgrade.

This is because, historically, this was an independent city that was part of the Austria-Hungary Hapsburg empire. Meanwhile, Belgrade proper was ruled by the Ottoman Empire.

If you are visiting Belgrade, you should certainly carve time out of your schedule to visit its quirky neighbour Zemun. Ideally, you should try and dedicate at least a full day to the area.

Serbia is a very budget-friendly destination in general. However, Zemun offers some of the lowest cost rentals and hotels, making it the perfect choice if you want to save money on accommodation.

Stroll Along the Waterfront at Park Ušće

It is possible to take a bus or a cab from central Belgrade to Zemun. However, opting to walk is a pleasant option and the journey takes just over an hour and a half each way.

Not to worry though, there are plenty of places to stop, grab a snack, or cradle a steaming hot cup of strong coffee as you go. If you plan on visiting Zemun on foot, you need to first cross the Brankov Most bridge.

A right turn through the leafy green area that sits before you will take you through Park Ušće and the banks of the river Danube. The park itself is beautiful – it consists of various walking trails and monuments dedicated to those who lost their lives during the world wars.

On a weekend from Spring to Autumn, you will often see local families having picnics or kids playing sports. The highlight though is the waterfront trail that runs adjacent to the Danube and runs all the way to Gardos.

You will find many stilted cafes and restaurants on the water. They tend to exude more Louisiana Bayou vibes than Balkan!

These establishments are a great place to stop for a scenic cup of coffee, a cocktail, or a spot of dinner. In the summer months, some of them operate as nightclubs when the sun sets.

Admire the View from Gardos Tower

Gardos tower (sometimes referred to as the tower of Janos Hunyadi,) is arguably the main draw of visiting Zemun. The Romanesque brick tower dates back to 1896 and has been built on top of the ruins of a medieval fortress.

During the days of the Hapsburg Empire, Zemun was the civilisation´s most southern city. You might presume that the tower was built for defensive purposes, but it was actually created to celebrate 1,000 years of Hungarian settlement in this region.

As you approach Gardos, you will notice a shift in the architecture. Former socialist structures and hi-rise office and apartment complexes are replaced by quaint, ramshackle pastel-coloured stores and houses.

The narrow cobbled streets here lead you on a journey back in time. Dozens of kitschy stores selling everything from clothing to handicrafts line the old streets and are well worth a look. Sindjeliceva street, in particular, is a great place to pick up Balkan souvenirs.

The tower now features a small art gallery on its ground floor. The exhibitions are ever-changing but tend to focus on street photography that depicts local life and social issues.

Beautiful Orthodox churches can be found all over Serbia and Zemun is no different. A stunning canary yellow church sits directly behind Gardos hill.

This church is the spectacular Church of Holy Great-Martyr Dimitrije Solunski. Many of the graves in the adjacent churchyard boast ornate, detailed sculptures that would not look out of place in an art gallery in themselves.

A number of notable Serbs have been buried here. Unfortunately, the church is often closed, however, its exterior is gorgeous and is a perfect place to take photos.

See the Remnants of the Yugoslavian Air Force Command Building

If locals open a conversation with you about it, be open-minded, non-judgemental, and lend an ear. In the late nineties, tensions were rising in Kosovo, and Serbia was accused of ethnic-cleansing Albanians.

Since Serbia didn´t back down on their aggression after being warned by NATO forces, the Belgrade bombing took place. There are no winners in war and unfortunately, many innocent civilians also lost their lives.

The NATO bombed buildings in Belgrade and Zemun still remain and have not been torn down or repaired. There are several theories as to why nothing has been done.

One theory is that the Serbian government simply does not have the finances. Another is that the buildings remain as a form of anti-NATO propaganda.

It may seem morbid to visit a site where many innocent people lost their lives, but this event has become an important part of Serbian history. The building can be found at 5 Glavna Street.

Be mindful and respectful of people around you if you want to photograph the building. Despite the destruction, the former Air Force Command building has its beauty.

It was built in 1935 by Architect Dragisa Brašovan and is considered a significant work of Yugoslavian architecture. Look out for the statue of Icarus that has been built into the wall at the side as you walk past.

Serbian food (and Balkan food generally) is renowned for its sumptuous meat dishes. However, the traditional delicacies served up at the restaurants in Zemun are decidedly different.

This part of town is known for its fish restaurants. This is, in part, due to the area´s close proximity to both the River Danube and River Saba, both guaranteeing an endless stream of fresh fare.

A number of specialty dishes are available here, and many local restaurants change their menus on a daily basis depending on what they have available. If you want to eat like a local, one particularly popular dish is the slightly spicy fish soup served at practically every establishment here.

(Kej Oslobođenja 53) are all worth adding to your Zemun foodie radar.  Šaran in particular is a renowned Zemun eatery regarded by many as the best in town.

The restaurant follows traditional local recipes and was opened over a hundred years ago by Vicentije Vukotić on the ground floor of his house. Their seafood offerings are extensive, but even if you do not prefer to eat fish, you will not be disappointed with the selection of meat and vegetarian options.

Dishes are best enjoyed with one of the establishment´s carefully sourced wines. Serbian and Balkan wine may not be very well known internationally but can certainly give famous Italian and Spanish wines a run for their money.

Hotel Jugoslavija is not an especially beautiful building. Far from it.

It has been built in a uniform socialist style and sits on Bulevar Nikole Tesle 3. It is arguably a garish block of concrete.

However, if you enjoy observing Socialist/Communist architecture, you may enjoy stopping by as a short detour from your walk through Ušće park. The hotel was built in 1969 and at the time, it was one of the first luxury hotels in Serbia.

Hotel Jugoslavija has played host to a range of celebrities, politicians, and royals – including Queen Elizabeth. It was recently renovated to offer more plush, modern rooms, and amenities inside. The hotel is so famous that movies have even been created about it.