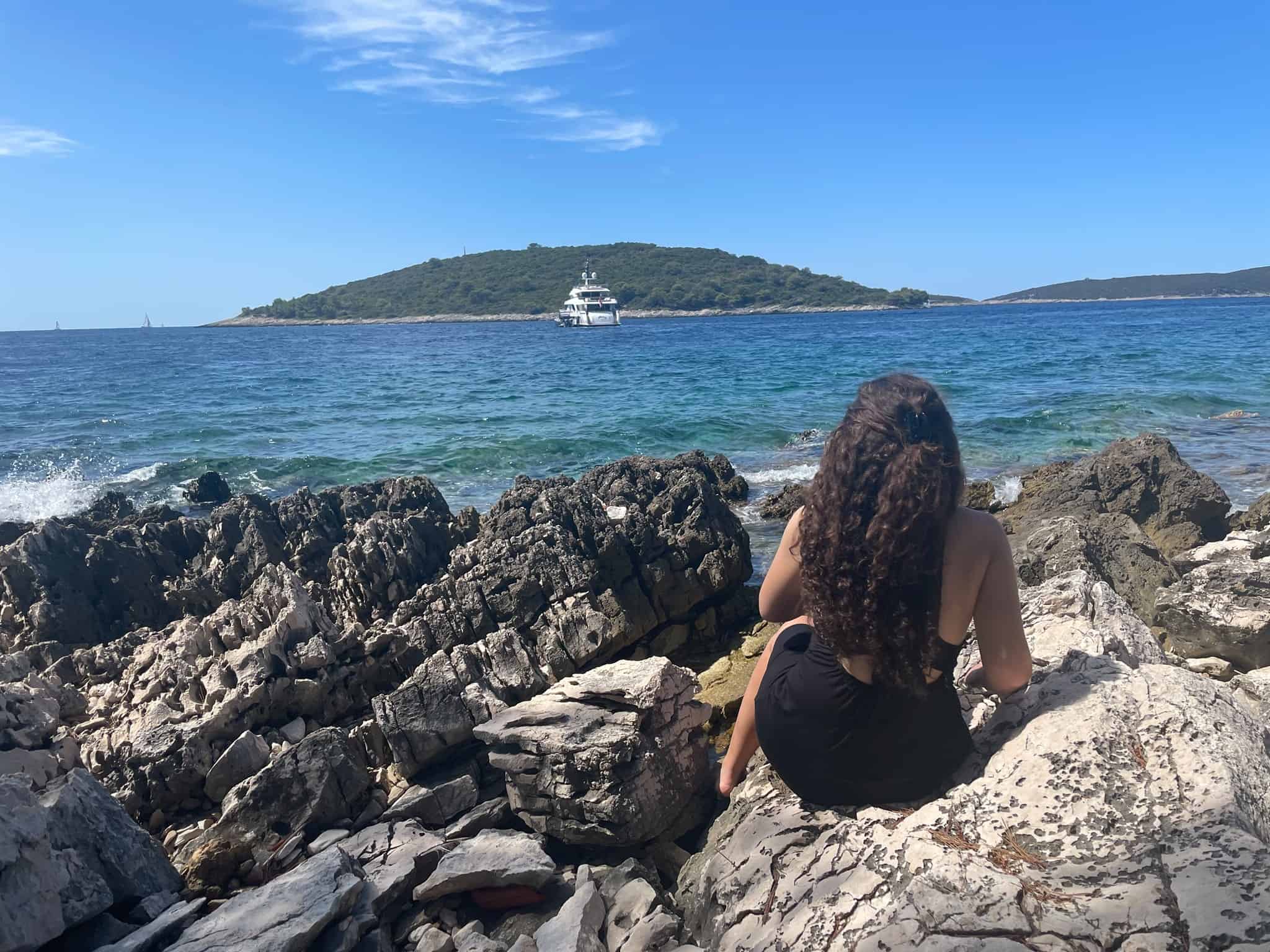 Tipping in Croatia is neither commonplace nor expected. That being said, it’s always appreciated if you leave a small tip if you really enjoy a meal or the service that you received somewhere. So what is Croatian tipping best practice?

There is a tremendous amount of conflicting information online about tipping in Croatia. It would seem that many western tourists have visited the country and decided to apply the same logic for tipping as they would in their own country.

Is tipping in Croatia required or expected? No.

You do not have to add a certain percentage to your bill for services or leave a tip after every meal or drink as you would in say the USA. If you don’t leave a tip, people are not going to be offended or upset.

Similarly, other articles online have suggested that when tipping in Croatia, you should simply round up your bill. Again, that is personal preference and not a rule of thumb or something that is expected.

That being said, tipping is always appreciated. The minimum wage in Croatia starts from around €550.

You can assume that those working in hospitality or service jobs are earning minimum wage or thereabouts. Many Croats that work in restaurants and cafes are often rushed off their feet, particularly in tourist areas.

Tipping in Croatia at Restaurants

Some element of personal preference comes into play when tipping in Croatia at restaurants. Most establishments do not add a service charge to the final bill. However, that may differ slightly at high-end eateries.

As aforementioned, tipping in Croatia is not expected, even at restaurants. This can be somewhat reassuring if you are travelling on a budget.

Some touristic parts of the country (Hvar, Dubrovnik, Split, etc) have become relatively expensive as a result of over-tourism. So, dining out here alone can be a stretch on the purse strings.

That’s not to say that you should not tip. Just that you don’t have to feel guilt or pressure about leaving a certain amount.

It is all about personal preference whether you decide to leave a gratuity or not. Don’t fret about it too much.

Basically, you can just tip what you feel is a reasonable amount based on the price of your meal. For instance, you may find a decent mid-range eatery where risotto is 60 kuna and your drink is 12. Leaving a 10-15 kuna tip is fine.

Similarly, you might be in a more gourmet restaurant in Sibenik sampling Croatian delicacies made with fine local produce. Your final bill may come to 170 kunas and so perhaps you want to leave a 20 kuna tip or round up to 200. Again, it’s all about personal preference.

Most restaurants in Croatia prefer that you pay in cash and as a matter of fact, many don’t even provide the option of paying by card! If you do opt to pay by credit/debit card, you will not see a point of sale message about adding a tip here. So, if you want to leave a tip, do so in cash.

Tipping in Croatia in Taxis

Taxis can be a convenient way to get around Croatia. In large cities like Zadar, Zagreb, and Split, you will find licensed taxis in abundance. You can both hail them on the streets or find them located at taxi ranks, just like in any other major city in the world.

You should not experience any issues with scams when it comes to Croatian taxi drivers. Generally speaking, they are pretty straight and simply charge whatever the going rate is to get from A to B.

Within city limits, taxis should operate on meters. If you are going farther afield, there is generally a flat fee.

You can check this before you get in the car. There is no extra charge for luggage.

If you are exploring smaller islands like Vis or Dugi Otok, there are fewer taxis around and it is less common to see them waiting at designated ranks. Instead, you need to find the contact details of a local firm and call them.

Tipping taxi drivers is never really expected. The only exception to this being perhaps if you are on a remote island and you use the services of the same taxi driver every day of your trip.

Or alternatively, perhaps you find a taxi driver in Croatia that you feel comfortable with and organise excursions and day trips with them. Then, if you feel that you have received exceptional service and you want to leave a small tip, you can do so at your discretion.

Uber exists in Croatia and is a convenient way to get around cities. Croatia is not as “cheap” as people seem to think but if you need to take a cab, you can rely on Ubers without breaking the bank.

You can typically get from one side of Split to another for less than 50 kunas (£6). Rates vary at peak times depending on the demand.

When your Uber trip ends, you will be given the option to tip your driver. Again, this is not expected and is at your discretion.

Tipping in Croatia in Coffee Shops and Cafes

Starting the day with a strong cup of coffee as you sit under an umbrella beneath the Mediterranean sun is a quintessentially Croatian way to start the day. Coffee culture is huge in Croatia and dozens of charming cafes line the streets and piazzas of most towns and cities.

Again, tipping in Croatia is not expected. A cappuccino will cost anywhere between 12 and 19 kunas depending on where you are.

If you like, you can just leave a couple of kuna as a tip. This is mostly something that is polite if you are going to be sitting somewhere for quite a while.

If you sit outside a coffee shop working on your laptop or whiling away several hours waiting for a ferry or a train, it’s polite to leave a small tip. It’s likely that your waiter/waitress will be repeatedly filling up your water glass, etc, so it’s just a polite thing to do.

Taking organised excursions and day trips in Croatia can take a lot of the hassle out of planning your itinerary. Similarly, opting to participate in walking tours or food tours can be a nice way to explore a new city away from the tourist hordes.

Simultaneously, you will have the opportunity to ask a local guide about their favourite places to eat, drink, hang out, etc. Their recommendations can really help you to experience places “like a local”.

“Free” walking tours can be found in places like Split or Dubrovnik. Of course, these are tip-based and you should not attend with the hope of getting something completely free.

Assuming you are joining a “free” walking tour for several hours along with other travellers, giving €10 is fairly reasonable. If you participate in a full-day or multi-day paid tour, it is still polite to tip.

Full-day excursions with local companies can be relatively pricey as is. However, if you can give a few extra euros to your Tour Guide, it will be much appreciated.

Similarly, if you participate in a multi-day tour, tipping a few extra euros for your guide and driver is polite. Perhaps you can pass around an envelope among the tour participants and everyone can give what they can.

Best practice etiquette for tipping hotel staff in Croatia is pretty similar to the logic you would follow anywhere else. In other words, if a bellhop helps you with your bags, it is polite to hand them a few kunas.

It is not expected but polite to tip housekeeping, This is particularly true if you’ve been staying somewhere a while and the room that you stay in has been serviced daily.

You can simply leave your remaining kunas, along with a thank you note, for the maid when you check out. Leave more if you so wish, it’s completely at your discretion.

Wolt delivery app is a great way to order food in Croatia. If you’re staying in any of the big cities such as Zagreb, Split, or Zadar for any period of time, there may well be days when you simultaneously don’t feel like going out to eat, nor do you feel like cooking.

You can download the Wolt app in the app store and create an account easily. Then, you can opt to pay by cash or card. Delivery is not free and at the point of placing your order, it will tell you what the delivery charge is.

It’s nice to tip your delivery person for bringing you the food. Just 10 kunas or so is a nice gesture. Alternatively, round up the bill.

Do you have any additional questions about tipping in Croatia, or planning a trip to Croatia in general? Please don’t hesitate to reach out via the comments below.

I’ll get back to you ASAP. Hvala! Safe travels, Melissa xo