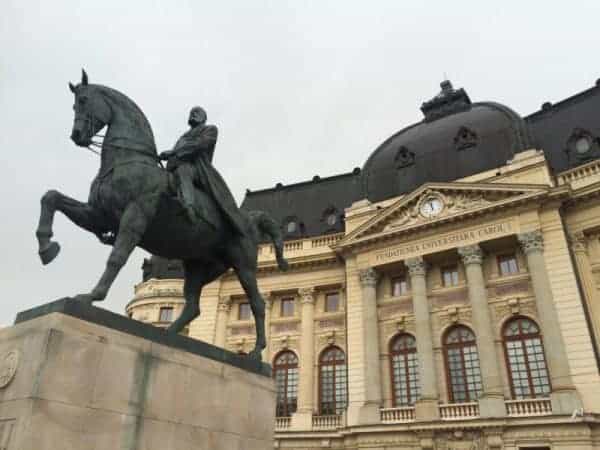 For the next month, I’m going to be traveling through Romania and I decided to kick off my journey with a long weekend in the capital of Bucharest. There are plenty of things to do in Bucharest, despite the city not being a particularly highly regarded or well known travel destination.
I flew here not knowing entirely what to expect – tales of gypsies, pickpockets and danger can make a person nervous, but in actuality I was pleasantly surprised by what I was greeted with when I touched down on Romanian soil. Though it isn’t a particularly beautiful city, and has a sad past which saw it overrun by communism, Bucharest is definitely an up and coming place. There are plenty of quirky coffee bars, boutique stores, and elegant restaurants to enjoy exploring. Bucharest is on the up.

You don’t really need a huge amount of time here. A day or two is sufficient, but here are some of the best things to do in Bucharest to help you plan your time. As always, I’ve included a blend of the “must sees” and the “hidden local gems”. The list has been composed based on first hand experience and the help of Romanian locals that I’ve met here in Bucharest.

The Palace of the Parliament

A huge sprawling beast of a building. The Romanians hate the palace of the parliament, since it was built by Romania’s dictator Nicolae Ceausescu in 1984 at the height of the communist rule. However, it is interesting to see since it is the largest administrative building in the world after the pentagon. The parliamentary home houses 1100 rooms and a contemporary art museum. It is so vast that the Romanian government are scraping to come up with ideas to occupy the space – one consideration being to build a supermarket!

I consider the local food to be a huge part of a country’s culture so I always ask about recommended dishes and restaurants upon arrival. Surprisingly, traditional Romanian food is not so easy to find in Bucharest. Most of the restaurants around the centre and the old town sell Italian food, or generic western cuisine like salads and burgers. You have to specifically set out to find Romanian cuisine but a few places to consider are:

La Mama: Traditional Romanian (and other western for the less brave in your party) cuisine in Bucharest old town. It’s a little pricey for Romania, but highly regarded by the locals.

La Placinte: Moldovan cuisine. Moldova was formerly part of Romania before it was taken over by Russia. This is another iconic restaurant serving up Moldovan cuisine, pies and desserts.

Taverna Covaci: Traditional Romanian restaurant with an antique, rustic interior and food that is cheap and tasty.

Carul cu Bere: Romanian restaurant and beer hall. Also a little on the expensive side.

Romanians are huge meat lovers and the majority of popular dishes are made with chicken, pork, or consist of hearty stews. Sarmale (stuffed meat in cabbage rolls with sour cream and polenta) is the unofficial local dish.You can also find plenty of bakeries scattered around the city which are a great place to pick up a quick snack for under a euro. (Romanian Apple strudel, what will I do without you when I leave?)

At first glance, Bucharest may appear to be a concrete laden city of unattractive communist architecture, but there are several large and beautiful areas of greenery throughout the city. Cismigui gardens in the centre of the city are filled with beautiful flower gardens, lakes, and sculpture gardens. There are several cute coffee shops within the grounds which are the perfect place to sit outside beneath the cabanas with a cappuccino on a nice day. Herastrau, the largest park is a popular place for locals to unwind around its lake.

Join the Creatives in Polona

Polona, a teeny tiny and unsuspecting street in the city centre provides a home for the creative spirits of the city’s artistic types.
The entrance to the street is marked by a hand painted Volkswagen camper van, which, after passing, reveals perhaps the most beautiful and unique atmosphere in the entire city. The cultural hub of “Acurarela” features a quirky bistro, outdoor drinking and dining, and regular live music performances. Should it rain during your visit don’t worry, you will be kept dry by the dozens of elaborately designed umbrellas tied across the ceiling.

Today, Romania is not an affluent country, and this was even further from the truth several hundreds of years ago. The peasant museum contains items of clothing, interiors, pottery and furniture, dating back to the 1700’s and paints an interesting picture of Romanian history.

The city is vast, and it can be overwhelming to try to navigate or at least, to understand the history and background of the buildings around you. Walkabout free tours depart from unirii square park every day at 10.30 or 6pm and the tours, conducted by local volunteers are free. Highlights of this include the previously mentioned palace of the parliament, ancient ruins, and communist revolution hot spots.

Scattered around the city are dozens of Eastern Orthodox churches. From the outside, most of them have a relatively humble appearance and they don’t really look like a lot, however their interiors are extraordinarily beautiful and their frescoes are painted with bold colours that make the churches look far more vibrant and alive than in most nations.

Perhaps it seems a little peculiar to include a cemetery on this list but hear me out: the cemetery dates back hundreds of centuries and features detailed and elaborate statues produced by noted local artists, many of which are now local historical sites.
Note: Photography is prohibited.

The architecture of old town dates back to the 15th century but the area itself is a relatively new zone, developed as a government initiative in recent years to provide a “trendy” neighbourhood for tourists and locals alike. The streets are lined with cafes and wine bars, all housed in grand and magnificent old buildings, and by night, there are plenty of bars and clubs here, whatever your music taste.

Find Deals on Accommodation in Bucharest!

Safety – Despite not having the most stellar reputation, Romania is a relatively safe country. I haven’t felt scared or threatened at any point during my time here and I am traveling as a solo female. Exercise the same precautions as you would do in any other travel destination – keep an eye on your belongings, don’t walk alone at night, etc.

Taxis – Taxis in Bucharest have a reputation for exploiting tourists. Uber works here, so I would recommend downloading the app and using that. If you find yourself in a situation where you have to use a local cab brand, then make sure that you have an idea of where you are going so you can check the driver’s route, don’t accept a fixed price and make sure that the driver uses the metre. The fair is 1.39 lei per km which is super cheap provided they are honest.

Getting Around: I pretty much walked everywhere, and you can easily do the same since most attractions are within a short distance of each other in the centre. Bucharest has a metro and hundreds of buses and trams which venture to various parts of the city.

Airport Transfers – You can take the 282 bus from the airport to the city centre. The price is equivalent to £2 (15 ROM) and it takes around an hour. A cab should cost you 50 ROM maximum. There is a really backwards system in place for cabs at the airport where tourists must take a ticket from a machine (for which the queues are long), then wait outside and look for the corresponding number plate. Cabs are often cancelled meaning you must get a new ticket. Be aware that it make take you some time to find a cab, particularly in rush hour.

3 thoughts on “Things to Do in Bucharest”