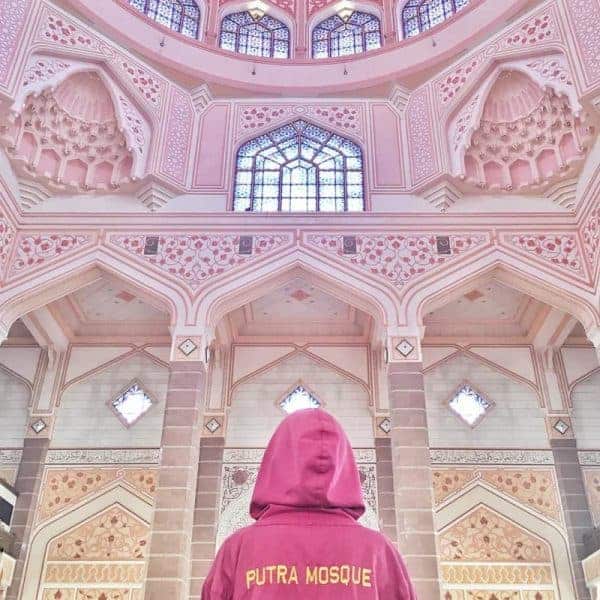 A beautiful futuristic city that has been designed in a distinct Arabian style, a Putrajaya day trip is a worthwhile excursion to incorporate into your Kuala Lumpur itinerary. The modern city may lack an element of “culture” and tradition but what it does not have in these areas, it more than makes up for in beautiful architecture and green open spaces. Putrajaya is often referred to as being the country’s “garden city” owing to all of its “” – gardens filled with beautiful flowers and grassy banks.

Honestly when I told people that I was taking a day trip to Putrajaya during my Malaysia trip, a few people laughed at me. Afterall, it was just an area that housed a lot of Malaysian government buildings and corporate headquarters so why on EARTH would I want to go there? In actuality, the satellite city is a pleasant day trip to take from Kuala Lumpur and offers plenty to do, particularly if you have a little extra time in the Malaysian capital.

Putrajaya can essentially be considered as being an extension of KL. Basically, the Malaysian capital was getting a little too crowded so the local government decided to move the business and financial district out to a separate area which became Putrajaya. Putrajaya is also adjacent to Cyberjaya – the Malay answer to silicon valley.

Things to Do in Putrajaya

The places of interest in Putrajaya can all be visited within a day. Grab a train from KL early in the morning and head back in the evening. From Putrajaya and Cyberjaya station, take a cab to the Putra mosque. All of the mentioned places below can be explored from there on foot.

Reflecting beautifully in the adjacent river, the candy cotton coloured pink Putra mosque is quite a sight to behold. I don’t know about you, but I have never seen such a perfectly instagrammable pink mosque before now! Everything here is bright pink – from the granite walls, to the interior frescoes and even the robes that you are given to wear inside!

The Putra Mosque dates back to 1999 so in actuality it is not very old at all. The mosque was however one of the first buildings that was constructed following the founding of Putrajaya. The special thing about the mosque (and most architecture in this modern city) is that it has been built in Arabian style rather than the traditional Malay. The mosque takes influences from Egyptian, Iraqi, Moroccan and Iranian mosques. The best aspects of each culture’s places of worship were taken and used to create the pretty in pink masterpiece that stands in Putrajaya today.

Non Muslim visitors can indeed visit the mosque, provided that they enter outside of prayer times and dress appropriately (cotton candy pink robes can be borrowed free of charge). Stop on Putra bridge to get some incredible photos with the water and the mosque as a backdrop.

From the Putra Mosque, a short walk along the adjacent bridge (the aptly named “Putra bridge”) leads you towards the Iron Mosque. The full name of this religious building is actually the Tuanku Mizan Zainal Abidin mosque (that’s a mouthful!)

At first glance, it seems as though the Iron Mosque is not a mosque at all since it does not have a minaret. The structure is  made mostly from steel, and it’s architectural influences are predominantly German! Just like the Putra Mosque, you can enter the Iron Mosque and are given lavish black and purple robes to wear inside.

The Parks and Tamans of Putrajaya

Putrajaya was not awarded its title of “garden city” for nothing. Dozens of beautiful parks that border the grassy riverbanks are scattered throughout the city. At several locations, it is possible to rent bicycles in order to enjoy a peaceful afternoon among nature.

You can take a free city map from the information desk next to the Putra mosque. It is possible to cycle in the river circuit that leads all around the city passing several points of interest, or to venture into the gardens. With hundreds of species of plants, trees, and a picturesque Moroccan style garden pavillion, the taman botani is free to enter and a perfect spot for a stroll or a picnic.

The unique thing about Putrajaya is that the city has been crafted in Middle Eastern style rather than traditional Malay. Many of the important offices and government buildings have ornate domed roofs that look like something straight out of Aladdin! The Perdana Putra Administrative Complex (next to the Putra mosque), the Palace of Justice, and the Seri Perdana are not to be missed.

To get to Putrajaya, you have a couple of options depending on your travel preference and budget.

Visit the City on a Putrajaya Tour

There are several tour companies and hotels that offer day trips around Putrajaya. This works out a little more expensive, however the city is very spread out and difficult to get around without your own transport so it may be worthwhile in order to take the stress out of your trip. You can find a great Putrajaya day tour here.

You can also take the train to Putrajaya from KL Sentral. The trains costs 14 ringgit each way (approximately £3/$3.50) and takes just 15 minutes. From Putrajaya and Cyberjaya station, you need to take a bus (or cab) towards the centre of Putrajaya (I would recommend headed to the Putra mosque and exploring the rest of the area on foot from there).

Public transport links in Putrajaya are infrequent and unreliable and it can be pretty difficult to locate cabs around the city. Your best option is to ensure you have a local sim card and take cabs to get around as you need using the GRAB taxi app. (The Southeast Asia alternative to Uber). Rides cost less than $1 each time, even covering relative distances.

I stayed overnight in Putrajaya and honestly I do not think this is necessary unless you want to be twiddling your thumbs. Even exploring at a relaxed pace enables you to see the city in a day.

With that considered, there are several hotels in the city, most of which are four or five stars owing to the fact that most that visit Putrajaya are business people or government officials.

If you DO decide to stay overnight in Putrajaya, double check the area before booking. Ideally you should stay in precinct 1 or 2, otherwise you will be forced to take cabs back and forth from your hotel. The Dorsett Putrajaya is a luxury hotel with an excellent reputation. Definitely avoid the Pullman Putrajaya though. I stayed there, and woke up in the night to hundreds of ants biting me in bed – delightful! When I left, I also later discovered that they had overcharged my bank account.

Have you heard of Putrajaya or travelled there? Let me know your thoughts below!

Disclaimer: This Putrajaya Travel Guide may contain affiliate links. In other words, if you decide to make a purchase through the links provided, I will obtain a small amount of commission at no extra cost to you, aiding me with keeping up with the costs of running High Heels & a Backpack. Thanks for your understanding.