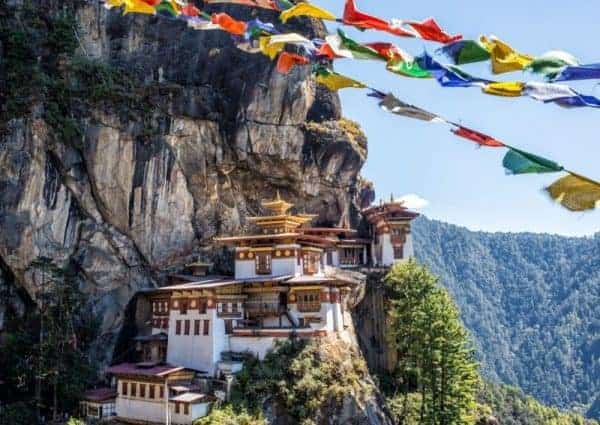 Hiking the Tiger’s Nest, Bhutan: We reached a fork in the muddy path. “We can take the long route, or the short route” my guide Tshering said to me as he glanced from left to right at the two different paths that ascended uphill towards Paro Taktsang.

“Mostly people take the long route. The short one is a bit steep. That shouldn’t be any problem for us though because we are both so young and fit!”

If there were any famous last words said, it would be those. We were doing the Tiger’s nest hike – the trek that makes the bucket list of all Bhutan itineraries and made the crescendo of my time in the mysterious Dragon Kingdom.

The route was steep, he’d got that right. We were clambering on all fours like Neanderthals. I immediately regretted not paying the 50p to rent one of the walking poles at the entry.

Tshering disappeared off into the woodland and materialised minutes later with a sturdy tree branch that I could use instead. Excellent!

Related Article: Why You Need to Visit Bhutan 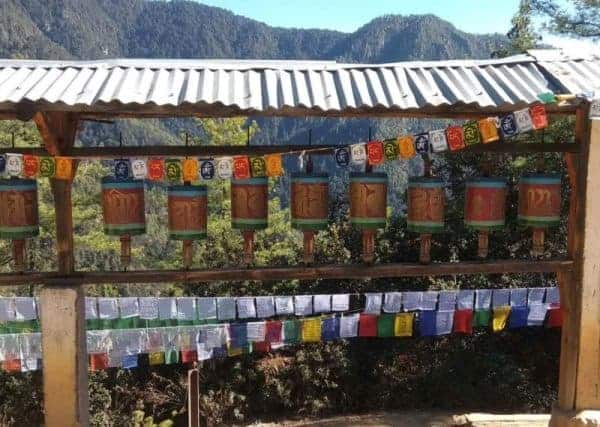 Away from the main trail, there was nobody here. Under the cover of the woodland, the only sound that we could hear was that of birds tweeting. Every now and then we would turn a corner and be met with incredible views over the valley and the town of Paro now far beneath us, our hotel looked like accommodation for ants.

Up here, it is incredibly difficult to breathe. The elevations on the ascent to the Tiger’s Nest Monastery exceed 4,000m and even those who consider themselves as physically fit or experienced Hikers will see themselves wheezing, panting and coughing like an 80 year old chain smoker after every few paces.

We stopped frequently, resting, chatting and enjoying the views of Paro Valley. The ascent was tough, until suddenly we turned a corner and there she was, glittering in front of us – The Tiger’s Nest Monastery.

The Story of the Tiger’s Nest Monastery

The Tiger’s Nest Monastery is a place of Bhutanese fables and  magic. During the 7th century, Guru Rinpoche is said to have flown here on the back of a magical, flying Tigress.

Guru Rinpoche is a Tibetan Divine Buddhist Master and is the person who is said to have introduced Bhutan to Buddhism. Upon arrival, he meditated at one of the holy caves here for 3 years, 3 months, 3 days and 3 hours in order to subdue any evils spirits or demons that could be lurking in the area.

Because the caves around this region are so sacred, in the 16th century, the Bhutanese decided to build a Monastery around them and so, Paro Taktsang or “The Tiger’s Nest” was born. Perched atop of a 3120m cliff,some of the rooms inside jut out over the edge and offer unparalleled (if somewhat terrifying) views.

If there was an icon of Bhutan, The Tiger’s Nest Monastery would be it, and it would not feel right to pay the country a visit without visiting this site. For Buddhists, hiking to the Tiger’s Nest is considered a pilgrimage.

Note: The background story behind the Tiger’s Nest Monastery is unusual for sure, but for the Bhutanese it is considered as a fact, not as a fable or myth.

As our hike to the Tiger’s Nest reached its conclusion, we had to progress down a series of over 400 stone steps, and then ascend up another 400. Passing us are Buddhist monks and pilgrims with offerings in hand sporting the traditional gho and kiras.

They breeze along, seemingly unaffected by the altitudes and the physical challenge. Some Bhutanese Buddhists participate in this journey several times a year.

Finally, the white washed walls of the Paro Taktsang monastery are immediately in front of us – the giant prayer wheels of the monastery visible and the colourful prayer flags fluttering in the wind.

Photos are prohibited throughout the entirety of the Paro Taktsang monastery complex and we have to lock our cameras and electronics into lockers. That’s okay though, since it encouraged us to give Paro Taktsang, and the tales of Guru Rinpoche our full attention.

We removed our shoes and stepped inside Paro Taktsang, our feet greeting the cold stone floors. From afar, the Tiger’s Nest may look like it is just one large temple, however it is actually comprised of nine small temples and praying halls, each serving different purposes.

The annexes are filled with the clouds and scents of incense, and the sound of monks chanting. The interiors were decorated with glittering golden statues and vibrantly coloured frescos all depicting the life of Buddha. It was easy to see why the Tiger’s Nest is a place of such spiritual importance for the Bhutanese.

We exited Paro Taktsang and made our way back towards Paro through the cover of the forest. When the Bhutanese pray, they often spin a sequence of large prayer wheels as they chant Buddhist mantras and here, relaxing by these wheels sat a Buddhist Monk.

He asked me what I thought of Paro Taktsang and I told him that I found it magnificent, that I had always wanted to visit this site ever since I first considered travelling to Bhutan.

I told him that what I really loved about Buddhism in Bhutan was the beauty of the prayer flags and how magical they looked when they danced in the wind. A fickle thing to say really, since their meaning runs much deeper.

The Monk rummaged around in his bag and pulled out handfuls of prayer flags, sorting through them thoughtfully. After a few minutes, he handed me one – the flag of the Green Tara.

The Green Tara is one of the female Buddhistatavas. It represents wealth and success for women. The Monk told me to hang it in a high place and its prophecy would come true.

It was such a beautiful flag that I almost didn’t want to leave it behind, but I felt that it deserved to be displayed somewhere and fulfil its purpose, rather than just sit at the bottom of one of my drawers among a heap of other souvenirs and so, Tshering and I searched the forest for a suitably high and sturdy place to hang the flag so that the prophecy would come true.

I’m not sure what it is about the Tiger’s Nest hike – maybe the fact that the altitudes here are a little higher than the usual, or that the monastery is perched at the edge of a cliff and that seems to exude danger, however it seems that many people are concerned that hiking to the Tiger’s Nest will be too challenging or out of bounds for them.

The altitude certainly has an impact on your body, however provided that you are in generally good physical health you shouldn’t encounter any problems.

Some hikers decided to stop at the cafeteria and look out across to the Tiger’s Nest, and others went all the way. You should do whatever you feel comfortable with.

The Tiger’s Nest hiking trail is approximately 6 km each way. If you are in generally good physical health it should take you about 2.5 – 3 hours. Remember it is not a competition. Go at your own pace and rest frequently as you need.

We ascended via the “quicker” steep route and descended via the easier alternative. The typical route is the same one which the people travelling on horseback take and has a slow, gradual incline. It does not require you having to hold on to trees for support or fumble around on all fours though the steep route does on occasion.

I wore hiking boots. You want to make sure that you invest in a good pair of hiking shoes like these, that provide you with sufficient friction and ankle support. The paths are muddy so depending on the time of year that you go, it can be a little slippery on the way back down.

There are bathrooms both at the entrance to Paro Taktsang, and at the Cafeteria which is essentially the halfway point along the route. Food-wise, the Cafeteria serves everything from light snacks to buffet style meals.

Pretty much every Bhutan tour operator offers your breakfast, lunch and dinner as part of the package and as such, Tshering and I stopped here. The food wasn’t bad actually! It was an Indian inspired buffet.

Animal Rides at The Tiger’s Nest

You can also ride up to the Tiger’s Nest monastery on horseback. To be honest, I don’t really agree with this so I cannot recommend it. Some of the animals looked really worn out and I was surprised to see this in Bhutan. The horses and mules are also trained to walk on the edges of cliffs. If that isn’t dangerous, I don’t know what is.

Fitting the Tiger’s Nest into Your Bhutan Tour

I did the Tiger’s Nest hike on my final day in Bhutan. I would recommend that you do not do it on the first few days of your trip for several reasons. Firstly, since Bhutan is nestled within the Himalayas your body needs some time to acclimitise to the high altitudes here in any case.

On your first few days you should take it easy as you may experience some light headedness or headaches as your body adjusts. Hiking the Tiger’s Nest sees you quickly ascend from 900m altitudes to over 4000m.

Secondly, it’s exhausting! Climbing all those steps made everything ache for a good few days after the hike so schedule it into your Bhutan tour schedule accordingly.

What to Wear for the Tiger’s Nest Hike

Comfy shoes are imperative for embarking on the tiger’s nest hike. So too are clothes that are comfortable overall and which you can move around in. Travellers should also remember that the Paro Taktsang Monastery is a religious Buddhist site and as such, it is imperative that they dress conservatively inside.

I would recommend wearing comfortable, softshell trousers and a long sleeved top for the tiger’s nest hike. Even if you travel to Bhutan in the middle of winter, conditions in the Paro area are warm and sunny during the day. During the colder periods, it’s advisable to layer up like an onion. I have also written a comprehensive guide on what to wear in Bhutan.

Seasonality and the Tiger’s Nest Hike

It is possible to do the tiger’s nest hike all year round. Rest assured that even in the height of winter, the trail does not become dangerous and inaccessible. Contrary to what you might think about being in the middle of the Himalayas, winters in Bhutan actually see some warm, sunny days!

Spring and Autumn are the most popular times to travel to Bhutan, owing to their warmer climates. Winter and Summer are the off-peak seasons for Bhutan travel, with the latter being the monsoon season.

Travellers may see fewer crowds along the Tiger’s Nest hike route during the off-peak periods. In the Summer and Winter months, the lower Bhutan travel tariff is also in effect.

Have any questions about hiking the Tiger’s Nest or Bhutan tours in general? Feel free to reach out to me.