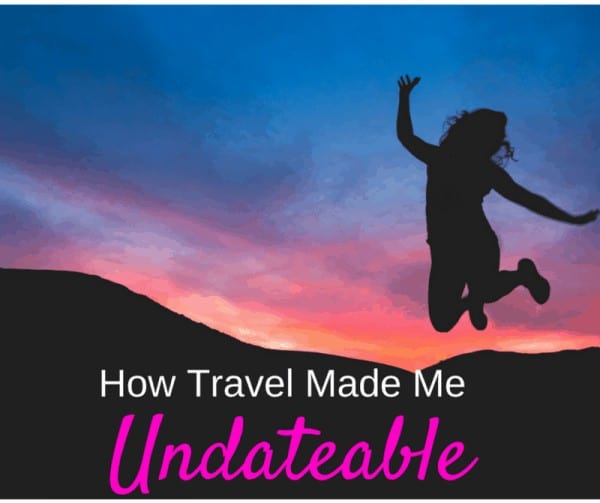 How travel made me undateable: I recently took a trip home to the UK to visit friends and family in London and it dawned on me that although many of my peers are starting to settle down, get engaged and have children, I am perpetually single and have been for several years now.

Sometimes I feel that it would be nice to have some companionship whereas other times, I realise that my lifestyle as a perpetual traveller, and the fact that I am just not willing to compromise on this are the reason why I am putting dating on hold right now. Maybe fellow travellers and nomads can relate to my musings on how travel has made me undateable.

Update November 2018: Since writing this, I met a handsome Greek Policeman and we now live together in Athens. Fellow wanderlusters – all hope is never lost! 🙂

How Travel Made Me Undateable

#1 I Am Constantly Travelling

Arguably the main reason that getting into a relationship, or at least anything more substantial than a passing fling at the moment has not been possible is due to the fact that I am constantly travelling and never in one place long enough to establish roots.

Dating a girl who travels may seem exciting at first but when it all boils down to it, who really wants a girlfriend that is never there? We all know that the early stages of a relationship are the most important so how can you put in that initial groundwork and develop something with someone who is always absent? Long distance relationships are notoriously difficult to maintain anyway – even established couples struggle with the difficulties that distance introduces, so how can something that is still blossoming hope to succeed?

#2 I Became a Social Recluse

These days you will rarely (if ever) see me out at the bar whether I’m exploring a new country or visiting my friends in the UK. I wind up living like a mole person most of the time because I just cannot justify the costs (going out for dinner and drinks a few times a month soon adds up!). Long term travel means having to live incredibly frugally in order to be able to sustain this lifestyle so typically I’ll opt for cooking at home with friends instead of going out or I’ll be spending my weeknights writing, blogging, or reading at home (aka not where the hot guys are!)

#3 Travel Made Me Selfish

Sometimes I’ll get an idea in my head and five minutes later I’m running with it. I’m the sort of person that will get half way through an article about Israel, decide that I want to go to Israel, book the flights there and then and proceed to throw things into a suitcase and scrutinise my bank account to try and figure out how to make the abysmal number staring back at me stretch while deciding that I’ll worry about the details (like affording to eat) later.

If I was in a relationship, I know that a lot of people wouldn’t be happy about someone just disappearing off by themselves whenever they pleased but as far as I’m concerned it is non negotiable. Maybe I’m selfish but that’s also partially why I’ve continued to put off relationships.

#4 I Became Too Accustomed To My Own Company

I have become so used to being by myself all of the time that I genuinely don’t know how I would adapt to having someone else there. I started travelling alone out of necessity, like many others – no-one wanted to come with me so I went alone. As time went on however, and I became a much more seasoned traveler, I began to value the freedom and flexibility that travelling alone allowed. I like to do things my way and on my watch.

As I am sure that many others who are perpetually single can attest to, I’ve also developed weird single behaviors that I would find it hard to snap out of.

#5 I Don’t Proactively Look For Options

Since I know that I won’t be sticking around at any one place for any real length of time, I don’t find it worthwhile to actively look for people to date. I will only be leaving again and saying goodbye to them anyway so this will only lead to heartache. I have also started living with the assumption (rightly or wrongly) that the right person is just going to fall right into my lap one day as I’m exploring, rather than being someone who swipes right on a dating app.

#6 I Became a Massive Tomboy

I spend most of my time trekking through deserts, clambering over stuff, and generally not behaving like a girl should. I don’t really know how to engage in the whole act of flirtation. You know when you read girls’ magazines and they tell you all of this stuff about the correct texting and flirting etiquette? I don’t abide by any of that. I am blunt and honest in my approach and say things how they are which I suspect is not at all intriguing, sexy or mysterious.

I am pretty comfortable and happy with my own company. I don’t need a man or a relationship to feel complete and I genuinely don’t believe that there is anything a man could do for me that I couldn’t do myself. I feel that a lot of men are still quite uncomfortable about strong and independent women and the concept of someone who doesn’t need a knight in shining armor is quite foreign to them.

#8 I Gained a Strange Sense of “Normal”

My closest friends are dotted quite literally across the world with some of them based in the UK, the US and South Korea. I consider it a good year if my best friend and I are able to see each other at least once in a 12 month period. The distances between us and the extended periods we go without seeing each other hold no bearing on the quality of our relationship. The same would apply if I ever met a guy: I’d still stay true and faithful to them even if we were miles apart however I realise that that is quite unusual and that I would be naive to expect that of someone.

When I got talking to a guy in London recently I realised that I would never be able to sink back into my old way of life and environment pre-travel because I had simply changed too much. I don’t really have any material possessions, I don’t care about getting a mortgage or getting married, and I’m really not impressed by flash cars and shiny things. I realise that by comparison to a lot of career driven people, I probably come across as aimless or perhaps even immature, but the fact is that our priorities are just so different. I can never envisage a relationship with someone who doesn’t share the same travel oriented outlook on life.

#10 I am Already in a Committed Relationship with Wanderlust

Whenever I’m not travelling, I’m thinking about travelling, writing about travelling or researching where to travel to next. Between trips I’m climbing mountains in my dreams and in my mind. I am hopelessly infatuated with wanderlust and he is the unattainable Bachelor that I just cannot get enough of. If I started to date someone, no matter how great or like-minded they might be, they will always be my mistress to travel.

What do you think? Has long term travel had an impact on your dating life also? Are you an undateable nomad like me?

Related article: Travel or Relationship – Do we have to choose? 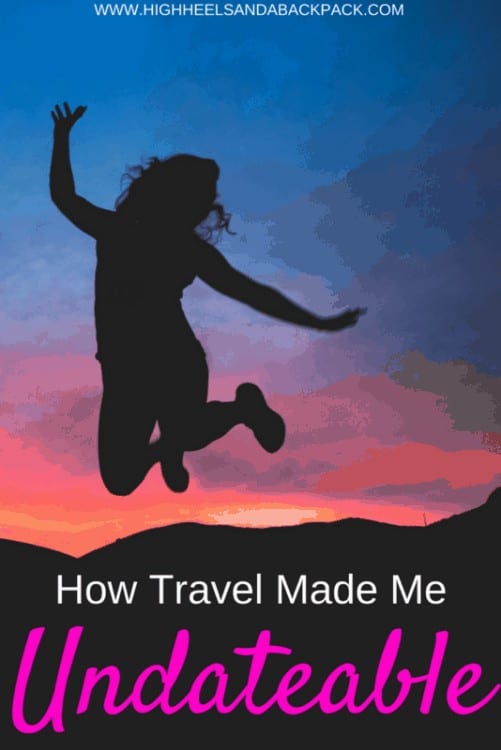 8 thoughts on “How Travel Made Me Undateable”