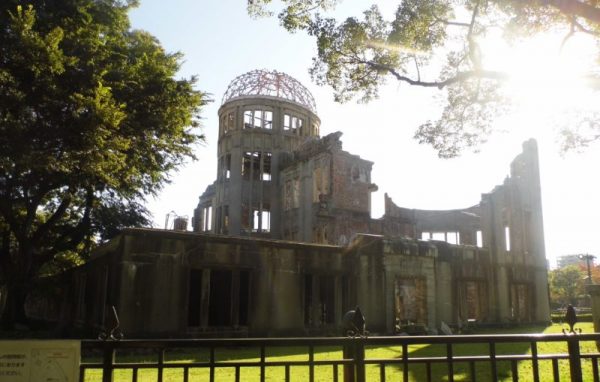 When I planned my first trip to Japan, I knew that organising a Hiroshima itinerary was something that I was certain that I wanted to do.

Situated in the western part of the island of Honshu, Hiroshima is a large, historic Japanese metropolis known for being the first city in the world to have been struck by a nuclear weapon.

On August 6, 1945, during World War II, the atomic bomb named “Little Boy” was dropped on Hiroshima leading to the deaths of well over 100,000 people and the destruction of most of the city’s infrastructure. Today, many of the best places to visit in Hiroshima are related to the disaster, but there are also several that offer glimpses to the city’s pre-war history.

Modern day Hiroshima possesses something of an eerie vibe – perhaps because the rebuilt Hiroshima is so beautiful, picturesque and quiet that it provides such a stark contrast to the events that took place here in 1945. The central business district of Hiroshima is small, and the city is surrounded by sprawls of beautiful parks and greenery. In any case, Hiroshima is a pleasant way to spend a few days as part of a wider Japan itinerary.

There are two sides to exploring and appreciating Hiroshima – one is travelling to Hiroshima to gain a history lesson and an insight into the unfortunate events that took place here several decades ago. Another is to appreciate the beautiful city that stands here today, and acknowledge the aspects of Hiroshima that are not defined by sadness.

Built in the early 1600s, Shukkeien Garden is a Japanese garden that showcases traditional Japanese art and style. It has a central pond with a bridge, as well as several pathways that take you to the different smaller gardens, tea houses, and miniature sceneries all around. Because it is only a 15-minute walk away from Hiroshima Station and opens at 9 a.m., it is best to start your first Hiroshima sightseeing day with it.

The original Hiroshima Castle was constructed in the 1590s, and it served as home to Hiroshima’s feudal lord then. Unfortunately, it was wiped out by the nuclear bomb that hit Hiroshima in 1945, and had to be rebuilt in 1958. What stands today is only a replica of the five-story main tower that contains various pre-World War II exhibits and artifacts. The grounds also include large stone walls, moats, and gardens. From Shukkeien Garden, it is only about 10 minutes away on foot.

Located in the heart of Hiroshima, the Peace Memorial Park is a large public park that was built in 1954 to honor the victims of the atomic bombing. It is home to the A-Bomb Dome, which are the ruins of the Hiroshima Prefecture Industrial Promotion Hall; the Children’s Peace Monument, which is a statue that commemorates the young ones who were killed in the bombing; the Memorial Cenotaph, which is a monument shaped like a saddle and contains all the names of the people that were killed; the Hiroshima Peace Memorial Museum, a museum that offers photographs, videos, memorabilia, and other displays related to World War II, the nuclear attack, and the life post-war.

The Hiroshima museum can be quite distressing to visit since it focuses on the experiences of the children that were affected by the Hiroshima bomb. Don’t wear mascara and definitely bring a packet of tissues. Publicizing these stories for visitors to see really outlines the consequences of war – the unavoidable innocent casualties and the importance of nuclear disarmament.

To get to the park from Hiroshima Castle, the walk takes about 20 minutes.

After a sombering tour of the Hiroshima Peace Park, head to the vibrant downtown area of Hiroshima to feast on some delicious Hiroshima-style okonomiyaki for dinner. Okonomiyaki was one of my favourite eats while travelling in Osaka, and fortunately you can find plenty of the regional variety here in Hiroshima.

On Hondori Street, you can find a small area called Okonomimura, which houses a cluster of restaurants that serve this delicious local specialty that is typically made with eggs, noodles, cabbage, and thin slices of pork, and cooked on a grill like a pancake. The cost of an order starts from 630 yen. From Hiroshima Peace Park, you can get there by walking 20 minutes or taking the tram.

When creating a Hiroshima itinerary, it is often encouraged to set aside at least a couple of days for the area – one for sightseeing around the city, and another for a short detour to Miyajima island. In Miyajima, the majority of the attractions are centered around the picturesque Itsukushima shrine complex and the highlights are detailed below.

Marvel at the Floating Torii Gate

The popular “floating” torii gate is a part of the Itsukushima Shrine complex, an ancient Shinto shrine believed to have been built in the 6th century. During low tide, you can actually walk to and get a close look at the gigantic 17-meter tall structure.

Next to Itsukushima Shrine is the Senjokaku Hall, a large and spacious ancient pavilion with a floor area about the size of a thousand tatami mats. It was founded in the late 1500s by legendary Japanese warrior and samurai Toyotomi Hideyoshi.

Founded in 806, Daisho-in is an important, historic Shingon Buddhism temple complex made up of several buildings, shrines, statues, and a hiking trail to the top of Mount Misen.

To enjoy incredible views of Miyajima and the Seto Inland Sea, hike up the island’s highest peak, Mount Misen. From the base, there are three hiking trails that take about two hours to reach the summit. There is also a ropeway that can take you to the upper ropeway station’s observatory.

To get to Miyajima, hop on a ferry at the ferry terminal next to Miyajimaguchi Station. There are frequent departures everyday via the JR Miyajima Ferry and the Sentonaikai Kisen. There is also a ferry service, the Aqua Net Hiroshima, that directly links Hiroshima Peace Park to Miyajima.

Where to Stay in Hiroshima

With a budget of 3,000 yen or less per night for accommodations, Hiroshima offers numerous cheap yet centrally-located and well-equipped hostels, like the J-Hoppers Hiroshima Guesthouse and the K’s House Hiroshima.

How to Get to Hiroshima

I took the shinkansen from Tokyo to Hiroshima, however you have a number of options for getting into the historic city depending on whether you are travelling to Japan specifically to visit Hiroshima or as part of a wider Japanese adventure.

Hiroshima Station is a stop along the JR Tokaido/Sanyo Shinkansen Line. From Tokyo Station, a one-way journey takes about four hours and costs 19,300 yen, and from Osaka Station or Kyoto Station, it takes about an hour and 40 minutes and costs around 11,000 yen to 12,000 yen.

From Tokyo (or other Japanese cities) to Hiroshima, travel via an overnight bus takes longer but is sometimes cheaper than the other transportation options. For instance, from Tokyo, a one-way trip takes 12 hours and can cost as low as 6,000 yen.

What to Eat in Hiroshima

The following are the must-try foods if you visit Hiroshima:

Okonomiyaki – Common ingredients of the Hiroshima-style okonomiyaki include batter, pork, noodles, egg, and cabbage, but are sometimes also mixed with cheese, octopus, and squid.

Momijimanju – A dessert that originated from Miyajima, momijimanju is a type of cake stuffed with sweet red bean paste and baked in the shape of a maple leaf.

Oysters – About three quarters of Japan’s total oyster production is from Hiroshima Prefecture, so the region offers a wide variety of oyster dishes, including raw, baked, fried, and grilled.

Have any questions about this Hiroshima itinerary or about travel in Japan in general? Let me know!