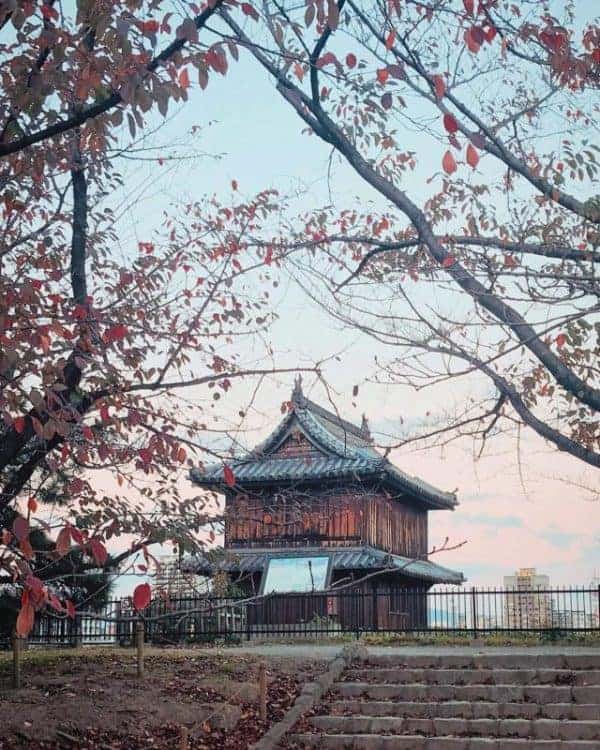 Fukuoka is a large and bustling harbour city in Japan’s southwestern island of Kyushu. Fukuoka isn’t the usual choice of cities to visit during a trip to the land of the Rising Sun but it is certainly a worthwhile addition to your Japan itinerary – particularly if you enjoy immersing yourself in the local culture when you travel.

If you need help with what things to do and which places to visit in Fukuoka, below is a tried and tested 48-hour Fukuoka itinerary that will allow you to explore the city at a comfortable pace. Fukuoka is also a perfect stopping point as part of a wider Japan backpacking trip.

Japan’s first Zen temple, Shofukuji is an ancient Buddhist structure founded in the late 12th century. It occupies a vast complex that includes several wooden buildings, gates, ponds, gardens, and walking trails. Its main hall houses several Buddhist statues, and features a ceiling with a cloud dragon painting. Because it is open 24 hours the entire year, you can schedule your visit as early or late in the day as you want. It is a 15- to 20- minute walk from Hakata Station, or a 10-minute walk from Gion Station.

Just across the bay from Fukuoka’s city center, Uminonakamichi Seaside Park is an attractive public park built on a peninsula. It is quite spacious, with many flower gardens, picnic areas, playgrounds, and open areas for sports and other activities. It also has a zoo, an amusement park, and a water park if you’re looking for a little more adrenaline.  The different parts of the park are easily accessible on foot or by rental bicycles year-round. To get there, you can either take the train to Uminonakamichi Station, which is found right outside the park entrance, or hop on a ferry departing from Momochi Seaside Park.

Try Local Cuisine at a Yatai.

Fukuoka is known for its open air food stalls or yatai. All over the city, you can find these small outdoor dining places that sit seven or eight people at a time, and serve a wide variety of dishes, including oden or hot pot, yakitori or grilled chicken skewers, ramen, and sake. The ones on Nakasu Island along the Naka River are probably the most popular, as they not only offer delicious, authentic Hakata dishes, but also pleasant nighttime views of the water and the nearby vibrant entertainment district. From Nakasu Kawabata Station, the Nakasu Island yatai are only 10 minutes away on foot. Alternatively, if you are coming from Hakata Station, you can catch the 100-yen loop bus that can drop you off close to the rows of food stalls.

Check Out the Fukuoka Castle Ruins.

Constructed in the early 17th century, Fukuoka Castle was Kyushu’s largest castle back in the Edo Period. Much of it was destroyed after the Meiji Restoration, and today, only some sections of the original walls and a number of turrets still stand. Over the years, though, a few of the surviving guard towers, gates, moat, and buildings have been rebuilt. If you visit Fukuoka in the spring, the site transforms into a breathtaking wonderland of sakura in full bloom, and attracts crowds of people who want to get great seats for cherry blossom viewing. To get there, take the subway to Ohori Koen Subway Station and then walk 10 to 15 minutes.

Situated at the heart of Fukuoka, Ohori Park is a nice park with a large central pond, and various areas for relaxing and unwinding, and different outdoor activities. It has a two-kilometer long trail that circles the pond, and is a very popular spot for jogging, strolling, and dog walking. It also features a Japanese-style garden, three small islands linked to each other by stone bridges in the middle of the pond, and a hexagonal-shaped red pavilion built on one of the islands. From Ohori Koen Subway Station, it is only a short walk away.

Shop and Dine at Canal City

To cap off your Fukuoka sightseeing tour, drop by the Canal City to shop for souvenirs and try more local dishes. This eccentric mall is decorated in shades of pink and blue and has dozens of stores and shops spread on its five floors that sell locally made handicrafts, food and snacks, gadgets, clothes, and others. Its entire fifth floor is made up of eight ramen shops that serve Hakata Ramen and other noodle specialties from around the country. From Hakata Station, it is about 15 minutes away on foot, or a quick ride via the 100-yen loop bus.

Where to Stay in Fukuoka


For budget travellers to Fukuoka, check out centrally-located, top-rated hostels, like the Bed Stock and the Montan Hakata Hostel. Japan has a reputation for being considered an expensive country, however a stay at one of these hostels will set you back only around 3,000 yen per night. These places offer bunk beds in dormitory rooms or single rooms for those travellers who desire all of the social aspects of staying in a hostel, with the privacy and comfort of staying in a hotel.

For those with mid-range budgets, private rooms at three-star hotels, like the Super Hotel Lohas Hakataeki or the Randor Residential Hotel Fukuoka, cost between 7,000 yen and 10,000 yen, and offer a comfortable stay along with easy access to the subway and train stations.

How to Get to Fukuoka

Fukuoka is served by the Fukuoka Airport, which handles flights to and from Tokyo, Osaka, Nagoya, Naha, Sendai, Sapporo, and several other domestic and international destinations, via Japan Airlines, ANA, Peach, Jetstar, Skymark, and others. A one-way trip from Tokyo is about two hours long, and costs from 5,000 yen to 25,000 yen.

By Shinkansen from Tokyo

There are several bus companies around Japan that offer routes to Fukuoka. A one-way journey via a highway overnight bus from Tokyo to Fukuoka takes about 15 hours, and a ticket is available from 10,000 yen to 20,000 yen.

What to Eat in Fukuoka

Have any questions about this Fukuoka itinerary or other suggestions for activities that fellow travellers should not miss? Let me know in the comments below!

Disclaimer: This page may contain affiliate links. That means that if you make a purchase through one of the links within the article I will make a small amount of commission at no extra cost to you.