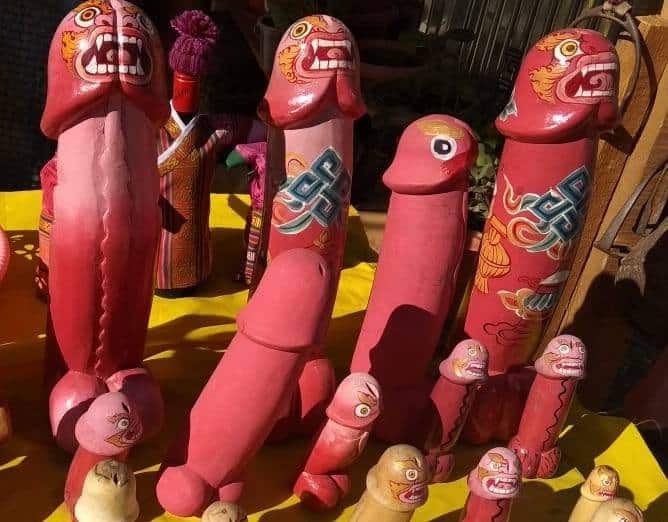 Drukpa Kunley, the Divine Madman of Bhutan, is one of the most notorious and outrageous figures in the Bhutanese Buddhist religion. But who was he and why is he so locally revered?

Bhutan is a land where myths and magic are intertwined with the country’s history. Stories of dragons, garudas, and enchanted spirits are not considered legends or fables in Bhutan, but true historical facts. One of the most notable and interesting figures in Bhutanese history is no doubt Drukpa Kunley.

Who was the Divine Madman of Bhutan?

Drukpa Kunley was a Tibetan Monk who arrived in Bhutan in the 15th century on a quest to spread Buddhism in the region. You will find him referred to by various different names via various sources.

He is also known as Kunga Legpai Zangpo, the Madman of the Dragon Lineage, and, amusingly, the ¨Saint of 5000 women¨ due to his womanising ways. He was renowned for his magical Bhutan penis which he used as a tool to fight off enemies and evil spirits. Yes, you read that correctly – his magical penis!

Kunley was born in Lhasa in 1455 and died in 1529. He rejected a lot of the expectations of Monastic life.

Although he possessed strong Buddhist beliefs, he also believed that the expectations placed on monks were too restrictive. So, he went about life in his own exuberant way instead.

Rather than practicing celibacy and dedicating his life and body to the Gods, Drukpa Kunley was a notorious womaniser. He claimed to have slept with thousands of women during his lifetime.

Similarly, he was known for having a particular affection for drinks of the alcoholic variety. However, despite breaking virtually all of the rules for being a ¨good¨ monk, Kunley was not rejected for his “sinful” actions.

Instead, he was revered for them. As Buddhism spread throughout the East, Kunley is considered to have been a man of the people. He made Buddhist texts and teachings easy to understand for the “common folk”.

It is said that Drukpa Kunley had a very unique way of “blessing” devotees and fighting enemies. He would subdue evil spirits by leaping into the air and striking them with a thunderbolt from his magical penis.

Kunley’s Bhutan penis was so powerful that locals awarded it a nickname – “The Thunderbolt of Flaming Wisdom”. In paintings, the Divine Madman of Bhutan is typically always depicted shirtless. He is the only Buddhist figure that is shown in this way.

When he went about his day-to-day life, the Divine Madman of Bhutan always carried an artificial phallus with him. It was made from wood and ivory. Today, the head monk at Kunley’s temple still carries a similar wooden staff.

The temple of the Divine Madman of Bhutan

The Chimi Lhakhang temple close to Punakha was built in 1499 in honor of Drukpa Kunley. This is actually the most visited temple in Bhutan!

Chimi Lhakhang was constructed by Ngawang Chogyel, the 14th Drukpa Hierarch. The specific location where it was built has important historical and spiritual meaning. Legend has it that Drukpa Kunley was passing through Punakha on his way to DochuLa Pass when he noticed an evil demon prancing about the hills in the form of a big black dog.

He clonked the devil dog on the head with his all-powerful Bhutan penis while shouting “Chi Mi!” (No dog!). From there, he trapped the dog’s spirit inside a stupa. Later the Chimi Lhakhang temple was built over the site of that event.

Locals will remark that the sloped hills where the temple is situated resemble a woman’s breasts. Kunley would surely have been happy with its location!

Temples in Buddhist culture are places of peace and serenity. Chimi Lhakhang is no different and contains far fewer obscenities and penises than you may imagine.

Chimi Lhakhang is also known as the fertility temple of Bhutan. It has become something of a pilgrimage site for local and international couples who are struggling to have children.

Even famous couples are said to have gotten pregnant after visiting the temple. Namely, the British Prince William and Kate, King Jigme Khesar Namgyel Wangchuck, and Queen Jetsun Pema of Bhutan.

If you are hoping to conceive, there are a couple of rituals offered by the temple. You can opt to stay overnight if your schedule permits.

Alternatively, you can request a blessing from the head monk. And in this context, a ¨blessing¨ means being clonked over the head with a ten-inch wooden phallus.

If you are simply visiting the temple out of intrigue as a tourist, perhaps keep a wide berth between yourself and the head monk´s penis-shaped staff! Some claim that today, the spirit of Drukpa Kunley, the Divine Madman of Bhutan lives on inside the staff.

That may be debatable. However, it is doubtful that there are many temples across the globe with a more unique fertility ritual.

Offerings for an eccentric monk

It is said that when people visited Kunley for his assistance, they would not be served unless they bought him a beautiful woman and a bottle of wine as a tribute.

Today, if you head to Kunley’s temple (Chimi Lhakhang) in the Punakha region of Bhutan, you can find dozens of old wine cases scattered around outside the premises. Even centuries after his passing, devout Buddhists still bring them as an offering during their visits to the Punakha region.

The Phallus in Bhutanese Culture

If you were hoping for more phalluses and eccentricities at Kunley’s Temple then don’t worry. You can find all of that in the nearby town of Wangdue Phodrang.

After Kunley’s apparent successes in defeating demons with his “thunderbolt of flaming wisdom”, locals started painting phalluses on the walls of their houses and businesses.

Why? In order to ward off demons and evil spirits.

This tradition is still followed today. Many Bhutanese people believe that painting genitalia on the side of their houses protects them from being the subject of gossip.

You will be impressed with how innovative some of the Bhutan penis murals are. Some of them are smiling, others are flying through the air, and so on. It’s quite a trip.

Aside from fighting evil spirits, phalluses were also historically very important in Bhutanese culture as a symbol of fertility. Some temples would have “gardens” of phalluses outside them.

Here, wooden phalluses of various sizes were placed on the ground. If a woman wanted a large baby, she would pray to the large phallus.

If she wanted a smaller one, she would pray to the small phallus and so on. You can see a great example of one of these fertility gardens at the Simply Bhutan Museum in Thimphu.

Modern Bhutan and the Phallus

Painting phalluses on the sides of houses and buildings is not a mainstream practice in modern Bhutan but it does exist. Even when you are hundreds of miles away from Wangdue Phodrang and Chimi Lhakhang, you may still see the occasional phallus mural on houses and outhouses in places like Paro.

Outside of paintings and murals, phalluses can be found everywhere throughout Bhutan if you pay attention. Offerings taken to temples are often presented in phallus shapes, ornaments in restaurants are often phalluses, and people wear phallus charms on their jewelry.

Getting to Chimi Lhakhang

Assuming that you travel to Bhutan on a tour, most Bhutan itineraries stop by at Chimi Lhakhang en route to Punakha from DochuLa Pass and Thimphu. The little yellow-roofed temple is situated a short walk away from the main road and is surrounded by rice paddies and picturesque fields.

The usual way of accessing the temple is to follow the dirt trail that leads through the fields and rice paddies from the road at Sopsokha. On your journey, you will encounter the tiny towns of Pana and Yoaka before crossing into an orchard and approaching Chimi Lhakhang.

After exploring the temple premises, try and dedicate a little time to browsing the handicrafts on sale at the nearby souvenir stores. Everything from detailed Bhutanese masks and beautiful embroideries, to startling phallus statues, can be purchased here.

The story of the Divine Madman of Bhutan and the nation’s obsession with the Bhutan penis can sound a little outlandish. Whether you believe the stories or not, there is a symbolic message to be taken away from it all.

While Drukpa Kunley was certainly a rebel, he stood his ground about following his own path to enlightenment. He lived in a way that he wanted to live, as opposed to doing what was expected of him as a monk. In a way, we can all learn something from that life mantra, whether we choose to adorn our houses with phalluses or not.

Have any questions about Drukpa Kunley, the Divine Madman of Bhutan, or travelling to Bhutan in general? You may also be interested in reading this post on reasons to visit Bhutan, or this guide to solo female travel in Bhutan.

1 thought on “Drukpa Kunley: The Divine Madman of Bhutan”