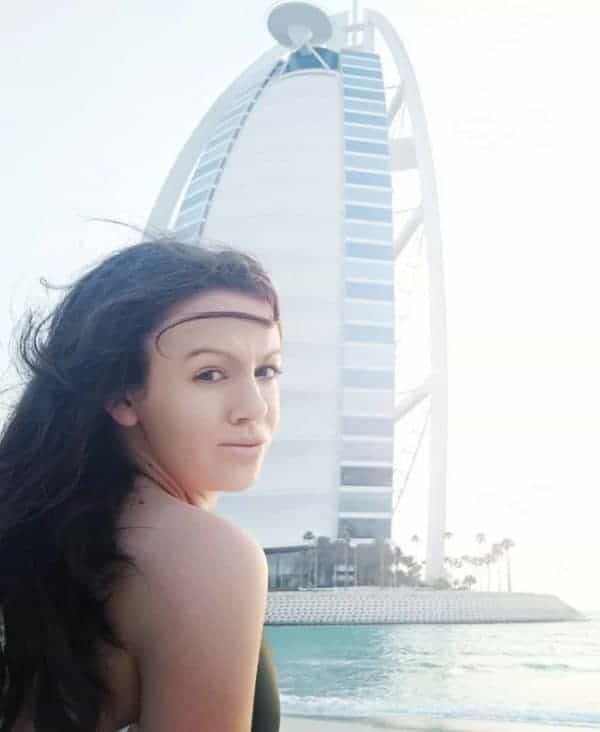 When I travelled solo to Dubai, I obviously had no idea that I was going to arouse suspicion and get detained at the UAE border. Dubai was never actually in my original travel plans, however since I was “in the area” in Oman (strange, expensive logic) and I was looking for a way to relax and regroup after a recent breakup, I thought that Dubai would be the perfect place to unwind.

While I was in Dubai I just posted loads of positive pictures and captions of the UAE on my social media because after my border experience I was paranoid that I would be thrown into a Dubai jail for some reason or another and encounter a 6 foot, hairy legged, monobrowed woman named Rococo who would make me her bitch (I would not fare well in jail). Ultimately, I ended up having a wonderful time in Dubai itself, however it was the getting there that was the tricky part.

Hilariously, before the events in this article unfolded, I was sitting on the bus ready to cross the border from Muscat, pre-emptively writing an article via the notes section of my phone about how easy it was to cross the border from Oman to Dubai because I wanted to get ahead of my blog post scheduling and I assumed it would be okay. As it turns out, karma was watching my cocky self. 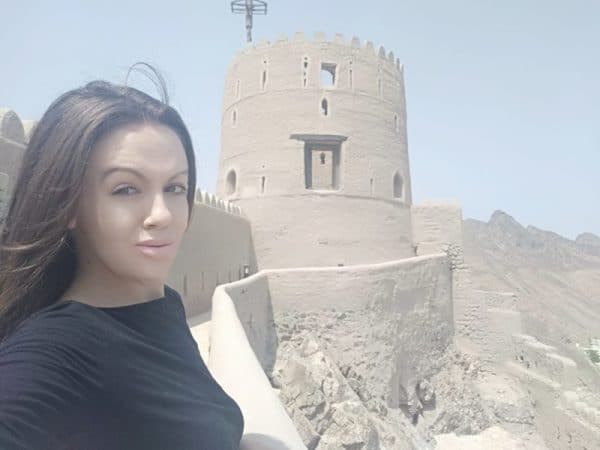 The bus from Muscat to Dubai should take around 7 hours. It’s quite a distance, however the cost variance between the bus and the plane was notable ($15 vs $90) and I figured that by the time I went through the hassle of getting to the airport, waiting around at the airport, etc, the journey time would be kind of similar anyway. Also, I wanted to write an article about the border crossing for my blog to bump up my monthly traffic (life priorities).

The bus rolled up to the Oman exit side of the border crossing and the process there was a breeze. The Immigration Officer had everyone form two separate queues dividing them into men and women and let all the ladies go first (thanks God for blessing me with a vagina). The guy briefly glanced at my passport and let me go to enjoy one last cup of Omani karak tea (Worth going to Oman for the tea alone!) before I had to board the bus once again and roll on through to the UAE side of the border.

The bus arrived at Hatta, UAE and everyone had to exit the bus once again in order to pass through UAE border control. I presented my passport to the Immigration Officer in the same way that I had done with the Oman border guard; however, the guy was quite short and snappy with me and told me to go and sit down while he verified my passport was real. I waited and waited as he worked through everyone else in the queue before calling me up again.

When he called me up again, another three guys had joined him and proceeded to question me about my passport. Why did I look so different? Had I had some plastic surgery? (excuse you Sir, this is actually my face!) Was I transporting medicines? Was I travelling on someone else’s passport?

The questions were ridiculous, and I was in utter disbelief. I remained quite friendly and chatty with the Immigration Officers, offering them alternate ID (I had my International Driving License with a photo on it, as well as my citizenship card from Korea, a ton of bank cards, and even other photo visas within my passport).

The Immigration Officers were having none of it though, even going so far as to look at my passport with a magnifying glass (precisely what are you looking for son?) I was asked to wait in a little room where they kept me for almost two hours repeating the same questions until finally letting me go. Since I was travelling on a bus from Muscat, this held up the other passengers who were pretty irked by this point.

Getting Detained at the Dubai Border

I reclaimed my seat on the bus, put my headphones in and started eating a milky bar (appropriate grown up 28-year-old entrepreneur behaviour). The bus turned the corner but there were four guys standing in the middle of the road, arms outstretched to stop the bus. I thought that maybe it was another checkpoint, so I craned my neck to see out of the window as the bus came to a steady halt.

As the doors opened, the Immigration Officers boarded the bus again for the specific purpose of taking me off the bus. There was no sense of “innocent until proven guilty” or having the decency to explain to me what was going on, just aggression.

They asked me to take all of my things off the bus. I had a small handbag with me, a medium sized backpack on the upper shelf, and a large suitcase under the hold of the bus. I couldn’t reach the backpack and the guy leaned in next to me yelling in Arabic for me to hurry up and get it down. The handle was trapped under someone else’s bag and eventually, another passenger got up to help me reach it.

The Immigration Officer was yelling at me to hurry off the bus, grabbing my arm and yanking me down the steps. I told him about my other suitcase in the baggage hold and he huffed, ranting angrily in Arabic once again.

Held at the UAE Border

After being taken into another small interrogation room, a gloved woman entered and took everything out of each of my bags examining every item – from the receipts within my purse to the notes I had jotted down in my journal. She asked me again if I was carrying medicines, and yelled instructions at me about what to open. Every now and then she left the room and wandered off leaving me to wonder what on earth was going on.

The questioning and checking process took hours – to the point where my bus left without me leaving me stranded and by myself in Hatta, UAE. It’s hard to convey precisely how stressful the situation was just by writing about it here. I was held there for almost an entire day and spoken to like I was a criminal and not allowed to use the bathroom when I had done absolutely nothing to arouse suspicion or concern.

After apparently deciding that their checks were enough, the border guards told me that I could go. However, since my bus left without me, I had to then take an exorbitantly expensive cab from the Hatta border all the way to Dubai. Even as I was leaving, the female border guard was making notes about me and writing down details from my passport, so I can only guess why.

When they decided to let me leave, there was no apology for the misunderstanding, no clarifying their processes or anything like that, just a kind of “get out now” at 11 o’clock at night when I was travelling to the UAE alone.

Contacting the British Embassy in Dubai

The British Embassy in the UAE is headquartered in Dubai. I tried to reach out to them to discuss what had happened at the border and they refused to comment or get involved. It took several weeks after I left Dubai to even receive a response from them.

It should be noted that should you find yourself detained in Dubai or involved in any kind of scuffle, the British Embassy’s policy is that they do not get involved in proceedings and leave the UAE to handle everything themselves. That would be fair enough if we were talking about a country that was renowned for fair treatment and justice of foreign and expat people, however Dubai and the UAE are notorious for being “strict” or for being overzealous when it comes to holding or prosecuting people.

People know that the UAE laws are strict, but after reading more and more information about occurrences similar to mine, or about people who were actually jailed on flimsy charges or apparently experienced the UAE’s own law being twisted to serve an agenda, I don’t have a positive feeling about returning to the UAE again in the future which I am sorry to say, since I always try to take an objective view even if I have negative experiences in the places I travel.

You may be reading all of that thinking “but I went to Dubai and had such a wonderful time!”. I understand that, however my personal belief is that everything is fine travelling in the UAE… until it isn’t, and if there are people that can be arrested for carrying medicines that are actually legal under  Dubai’s own ruling, or for flimsy accusations that result in them being beaten and abused in jail, the same could happen to anyone else too.

I understand that when incidents like this happen, it’s human nature to assume that the individual involved must have been doing something wrong in order to draw attention and suspicion to him/herself. In my case I was dressed conservatively, very polite with the Immigration Officers and can speak a little Arabic which I used to greet them with. I was by no means a disrespectful, obnoxious western tourist.

This article was purely written to share my experiences of crossing the border to Dubai and the unfortunate treatment I endured by the border guards as a result. However, if you or your friends/relatives find themselves detained in Dubai or encountering any problems in the UAE I would recommend notifying the British Embassy (or your country’s relevant embassy) to make them aware of what has happened.

Since the British Embassy refuse to get involved with any proceedings, this is more of a formality. It seems that the best protocol to follow is to contact and try to get the help of Detained in Dubai.

2 thoughts on “Getting Detained at the Dubai Border: Do I Have the Face of a Drug Baron?”