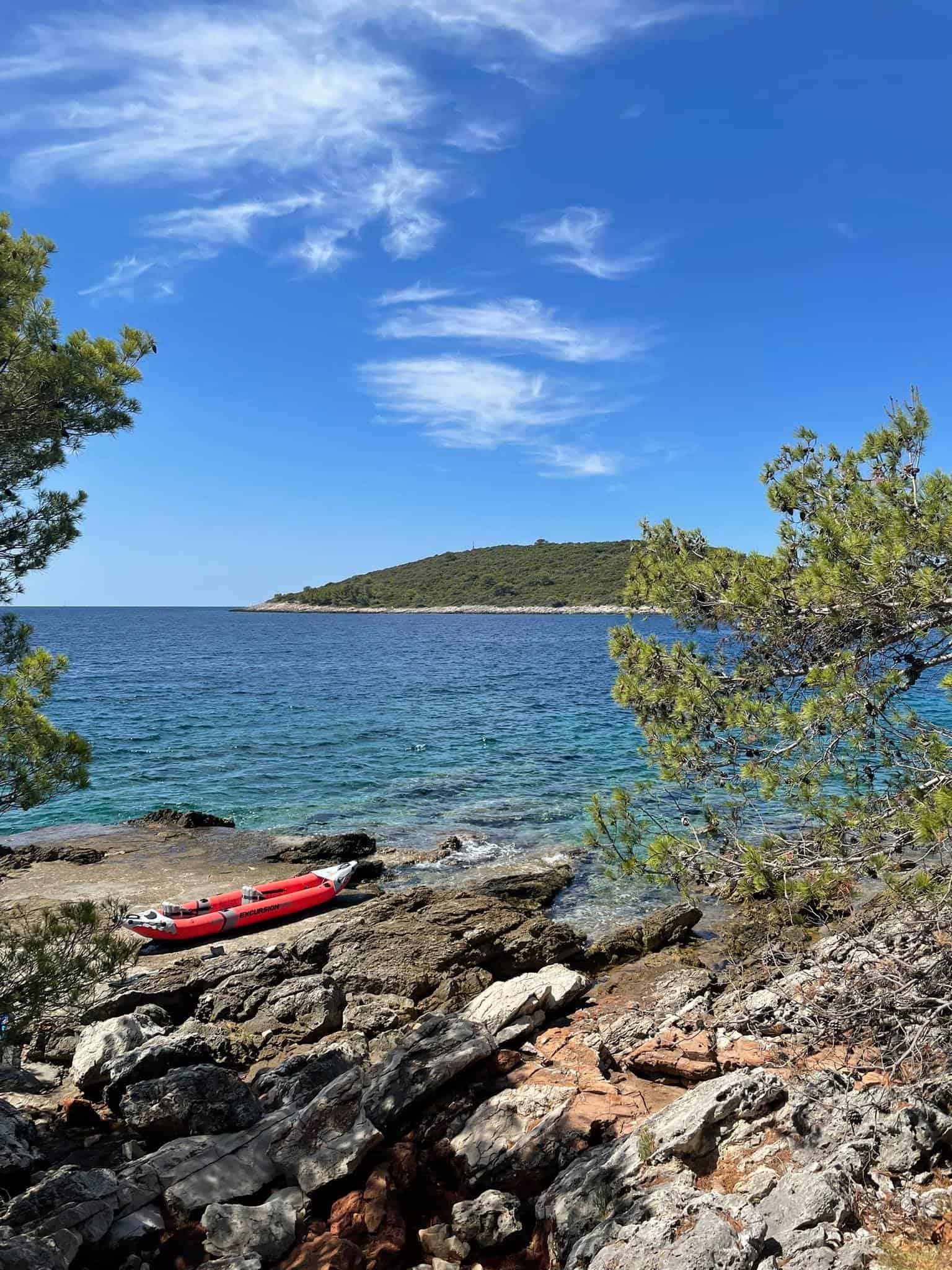 Dating in Croatia may be somewhat different from what you are used to depending on where in the world you come from. Compared to western cultures, Croatian culture is more traditional and conservative and so, dating etiquette is slightly different here.

That being said, Croatians are warm, friendly people that take an interest in meeting people from other countries and cultures. Come with an open mind and no expectations. Dating in Croatia can be a fun part of your travel/ex-pat experience.

Tinder in Croatia does exist. If you download the app and start swiping, you will notice that plenty of local people are pretty active on it.

But is Tinder in Croatia the way to go if you want something of substance? Honestly, no.

Different countries and cultures have different views of Tinder. In the west, there are certainly those that use it as a hookup app.

However, similarly, many people use it if they are looking for something long-term and more serious. For people with busy working lives that don’t necessarily get to go out and socialise as much as they’d like, tinder has become a key way to meet people.

Manage Your Expectations on Tinder in Croatia

Unfortunately in Croatia and much of the Balkans, Tinder is seen as a hookup app. Not only that, but it seems to be seen in the same light as, say, a sleazy ad on Craigslist.

Here it is considered relatively strange to tell people that you met someone on Tinder, let alone have a relationship from it. The stigma attached to the platform, along with the perception of it from locals adds to the seediness.

If you are female and match with a local guy on Tinder in Croatia, they will assume you want to hook up. Not only that but many of the messages are revolting and often, downright disturbing.

You will note that people immediately start asking for your location or make requests of a sexual nature that are sometimes quite extreme. You will also see that many people on the app don’t have photos of their faces, have limited photos, or, upon exchanging Whatsapp information, they have no Whatsapp photo and try not to reveal their identity.

This is all incredibly weird. Why would you want to meet someone anyway if you did not know anything about them, nor what they looked like?!

It all feeds back into the seediness and negative connotations of using Tinder in Croatia. It is almost as though people are using it for anonymous hookups. If locals see you on it, they almost believe a right swipe is a consent that you’re down for anything.

Zagreb is more liberal, whereas the Dalmatia region (Split, Sibenik, and the Adriatic islands) are more conservative. It’s hard to say whether the attitudes to Tinder in Croatia are a result of conservative expectations, or of the men assuming that tourist women are more promiscuous.

Online dating in Croatia exists. However, it is still a relatively new concept. Badoo and Tinder are arguably the main travel dating apps here.

Most Croats will meet people the “old-fashioned” way. In other words, they approach people in person, or they meet their future partners through friends of friends.

That is not to say that online dating is hopeless. It is just that it isn’t as commonplace as in the west. As a foreigner, you can still meet locals to date, even if you have not mastered the tricky Croatian language yet.

Try to meet locals through activity groups and meetup events. You can also visit local bars and cafes in areas popular with locals and foreigners – for instance, the waterfront and rooftop bars in Split, Makarska Riviera, etc.

When I first arrived in Croatia, a newfound Croatian female friend expressed her sheer shock and horror at the fact that men in the UK expected women to pay for half of the date. In Croatia, “going Dutch” (i.e. splitting the bill) is not a thing.

Men are expected to pay for the date but more than that, they insist on doing so. As a woman dating in Croatia, attitudes from Croatian men can feel very chivalrous.

Your date will likely pull out your chair, pour your drink for you, pay the bill, and act like a complete gentleman. That is, assuming you have not met on Tinder!

Male ex-pats and tourists should keep in mind that if they are dating a Croatian girl, they will be expected to pay the bill. Asking a Croatian girl to split the bill here could cause offense and will likely mean there will not be a second date!

Dating in Croatia is still very traditional in many regards. Here it is still typical for men to make the first move and initiate all the contact.

That being said, locals will also appreciate cultural differences when dating people from other backgrounds. For instance, foreign women dating Croatian men may find that the men appreciate a woman making the first move, showing initiative, and showing confidence. Conversely, foreign men pursuing Croatian women will be expected to chase.

Obviously, physical appearance is not everything, especially if you want something meaningful. But if you want a general idea of what locals look like?

Croatians are typically very tall. A recent study found that men from Dalmatia were the tallest in the world!

This is great news for women that refuse to date men over 6 foot! Similarly, women here tend to be relatively tall.

You will note that Croatian women take good care of their appearances and often find it important to dress up, fix their hair, and choose nice outfits, even to attend casual events. Croatian men are often very masculine. They may dress casually but they find it important to work out and be in good physical shape.

There are obviously distinct cultural differences between Croatia and the west. Once again, this is particularly true of the Dalmatia region.

If you are dating in Croatia and you feel that your relationship has the potential to get serious, it’s a good idea to try and educate yourself on Croatian culture and customs as much as you can.

Of course, we cannot generalise or stereotype an entire demographic/nationality of people. However that being said, there are things to be aware of.

Some Croats may be open to dating foreigners casually yet can never see themselves having a future with someone that is not Croatian. This is not the status quo but it does happen. So, it’s important to understand someone’s bottom line early on.

Similarly, since Croatia is generally more conservative than the west, it is not uncommon to find people here that still have strong traditional gender views. You are likely to find that you have more long-term compatibility with someone that has had exposure to foreign cultures, is well-educated, and well-travelled, as opposed to someone that grew up in a remote, rural area.

This could essentially be said when it comes to dating in any country that is not your own. The same is essentially true of dating Greek men and dating Turkish men.

Dating in Croatia seems to move faster than dating in the UK or the USA. Found someone interesting that you find attractive? Why wait around?

In the west, you might meet someone, text them back and forth for a while and then organise a date. This is particularly true if you’re using dating apps like Tinder and you want to get an idea of who you’re talking to before you meet a complete stranger off the internet!

Dating in Croatia however, things are different. You might meet someone and exchange numbers, or swipe right on Tinder in Croatia, and the person wants to meet later that same day!

It is not uncommon for people to suggest meeting that same day, or perhaps the next day. In some ways, it can be refreshing.

At least you are not wasting days on an endless back and forth text conversation that may eventually fizzle out. Strike while the iron’s hot!

If you are a female traveller in Croatia, particularly if you are visiting popular coastal cities like Split or the islands of Hvar, Korcula, Brac, you are likely to receive some advances from local men. Some of these men are charming, good-looking, and speak impeccable English.

But… they are galebs! What the devil is a galeb?

Galeb is the Croatian word for a seagull. But what this actually refers to is Croatian casanovas.

They roam around their natural habitats: touristic places. Here, they have a new foreign girlfriend every week.

If you’re looking for a summer fling or some casual fun, you do you. But don’t be naive.

This isn’t exclusive to Croatia. It is likely that people act like this often in tourist places when they have a constant influx of attractive single people.

In Greece, this is called “kamaki”. It comes from the Greek word to harpoon and the ‘sport’ of chasing and scoring with foreign women is likened to hunting a fish with a spear. Romantic.

If you sit and watch these men it’s pretty interesting. The routine tends to go like this:

They’re pottering around the town together for a few days. She leaves.

He waves her off at the port. Parting in such sweet sorrow!

As her boat pulls away and she’s waving dramatically like Pocahontas saying goodbye to John Smith (don’t ask about that analogy), another boat pulls in! Pretty girl disembarks.

Do you have any additional questions about dating in Croatia? I spent two months here in 2021.

Feel free to reach out via the comments below. Wishing you safe travels, always!

1 thought on “Dating in Croatia: A Handy Guide for Tourists and Expats”