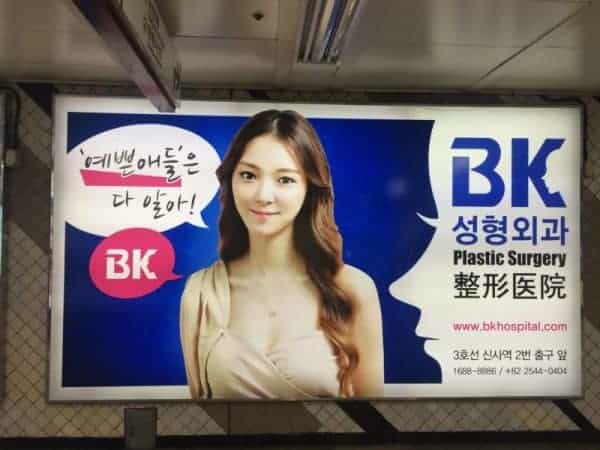 It’s no secret that trying to achieve virtually impossible standards of physical beauty is something that is deeply ingrained into Korean culture and that being beautiful is considered to be a factor of utmost importance. I discussed my experience with this in my article for The Huffington Post “Are You Pretty Enough To Live In South Korea?” . However, body shaming in Korea is also rife. So, when we get to talking about weight, what’s the Korean verdict on what is a healthy weight to be?

Growing up in the West, we become quickly accustomed to seeing people with bodies of all different shapes and sizes, and we are taught to accept them as they come. However, in Korea, the pressure to be unrealistically beautiful is also accompanied by the pressure to be incredibly thin.

This post is not intended to bash Korean perspective and outlook on physical beauty or debate what is “healthy”, nor is it a scientific study; purely, it is my experience with body shaming in Korea, as someone currently living and working in Seoul, that I am sure many other expats can relate to.

In the UK, I was considered as ‘slim’ by Western standards – I eat healthy, I treat myself every now and then and I walk and exercise every day. I’ve always felt pretty comfortable in my body and have never been made to feel bad about my weight until I moved to Korea.

“Teacher, you fat!” is something I hear almost every day from the students in my elementary school classes. When the learning topic was food in one of my fourth grade English classes, I asked the students what their favorite foods were and told them mine in return. In response, I got a “that’s why you are so fat!”. I would be appalled by such manners in the West but in Korea, it isn’t considered rude to openly criticize someone’s appearance. When I advised that it wasn’t a nice thing to do, I was met with blank stares.

“I just eat one avocado a day on work days so I don’t get fat” a colleague tells me, smiling with pride as though she has just been nominated for a Nobel prize.

“No, I had BBQ for dinner yesterday, so today I take a rest from eating ”  another Korean friend advises when invited for lunch.

“I can’t, my Mum made me go on a diet!” a fourth grader huffs when offered a cookie.

These are all very real statements I’ve bore witness to over the past six months.
This kind of thought pattern is something that I dismissed back in high school.
There is a significant difference between being thin as a result of a healthy lifestyle, and by starving yourself which, as far as I am concerned, is no different to self-harming.
Body shaming in Korea is something that affects me almost daily. You would think that I was trying to audition for the new Victoria’s Secret catalogue based on the intense scrutiny my body and physical appearance comes under on a daily basis.

It’s very sad to me that unrealistic expectations for one’s physical appearance are more of a concern than personality or intelligence and that a person’s attractiveness has such a significant impact on the way that they are treated.

It is difficult to remove yourself from this when you are surrounded by people who are constantly trying to lose weight, or trying to encourage you to do the same.
I suppose that the best thing for us Western expats to do is to grow a thick skin. Don’t ever let a Korean’s comments knock your confidence and don’t ever accept it as truth when a Korean calls you fat. Nothing positive can come from torturing yourself to try and achieve a certain, unrealistic standard of self and for whom are you doing such a thing?
Have you had any experience with body shaming in Korea? What happened and how would you advise others to deal with it?

4 thoughts on “Body Shaming In Korea”