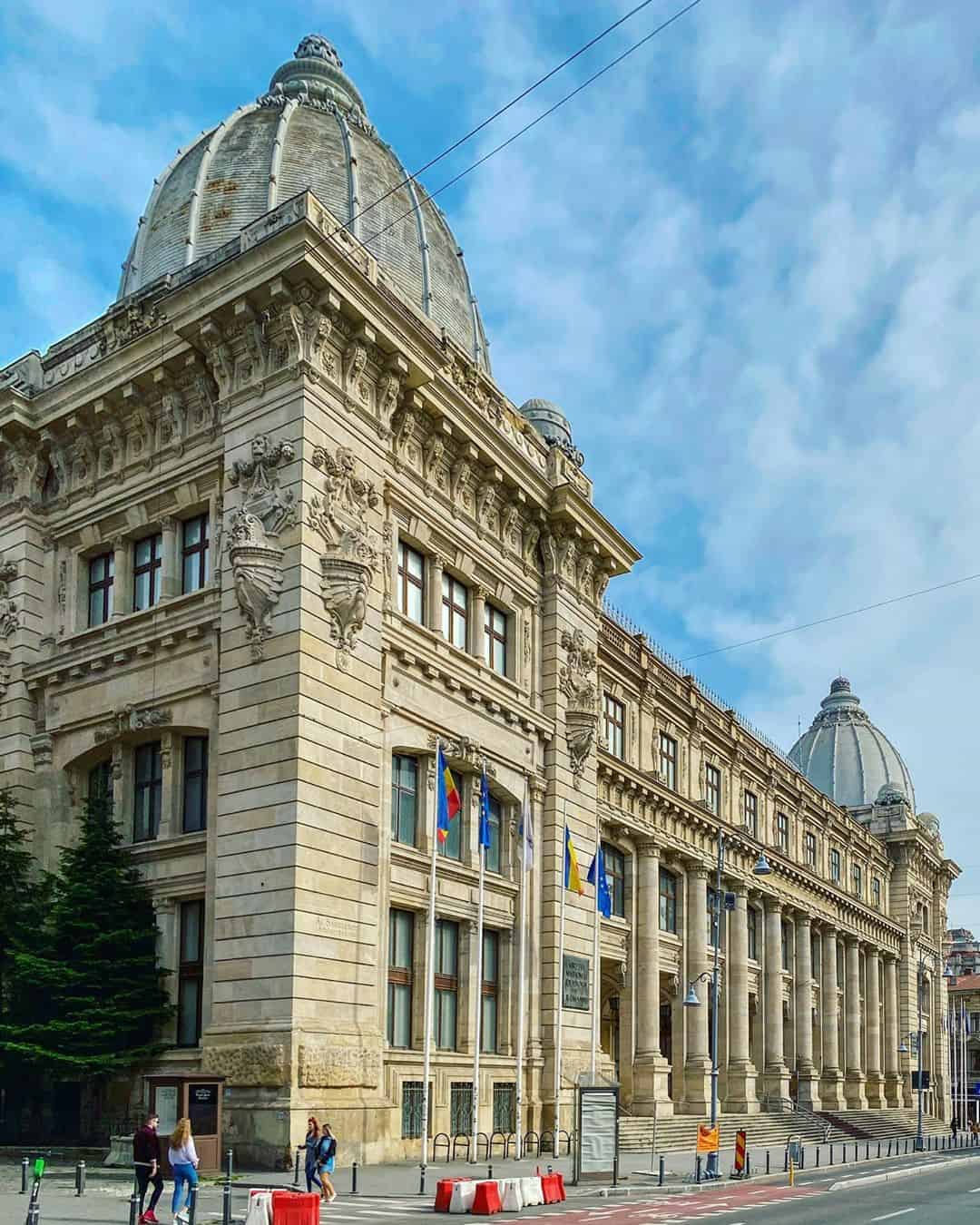 This Romania itinerary offers you the perfect introduction to Romania. It takes you cross country from the cobbled streets of Bucharest, through the fairytale landscapes of Transylvania, and onwards to the chic cosmopolitan city of Cluj Napoca.

Falling in Love with Romania

Romania boasts a rich and diverse history and culture that will captivate even the most well-travelled adventurers. The stunning region of Transylvania is filled with ancient castles and idyllic medieval towns.

The cobbled streets of Sibiu, Sighișoara, Brasov, and Râșnov appear almost frozen in time. Meanwhile, the lovingly restored buildings of Bucharest and Cluj exude a hip-youthful vibe. Many of these buildings have been converted into elegant bars and upscale eateries.

Nature lovers will not be short of opportunities to immerse themselves in the “Great Outdoors” during their Romania itinerary. The Carpathian Mountains tear through the centre of the country.

This mountainous region provides a stunning backdrop for the long drives through the country. Additionally, it boasts a plethora of hiking routes. Romania has something to captivate every type of traveller.

There is arguably no such thing as a bad time to embark on a Romania itinerary and each season offers something a little different. With summer comes better weather.

However, Romania in winter is equally magical and is not as blisteringly cold as you might think. Opting to travel at this time means the opportunity to see the Carpathian Mountains and other Romanian landmarks under a canvas of soft white snow.

This 10 day Romania itinerary starts in Bucharest and finishes in Cluj. It is also possible to do the trip in reverse. Many international budget airlines run to both Avram Iancu Airport (Cluj) and Henri Coandă International (Bucharest).

This Romania itinerary may contain affiliate links. This means that if you choose to make a purchase through some of the links contained on this page, I may obtain a small amount of commission. This is charged at no extra cost to you.

Bucharest is the capital of Romania. The city is alive with a buzz of activity.

The Romanian capital may not be the most beautiful city in Europe. However, scratch beneath the surface and you will find that Bucharest’s fascinating history, hidden Orthodox churches, and friendly locals more than make up for its outward appearance.

There are enough things to do in Bucharest to keep you occupied for a long weekend. This is a great place to start your Romania itinerary.

Sites such as the Palace of the Parliament and the Sighet Memorial tell the tale of Romania’s Communist past. They help you to understand the traditions and customs of modern Romania today.

Consider embarking on a Bucharest walking tour or bicycle tour with the aid of a local. This lets you see the city from the perspective of someone who has been born and raised in Bucharest.

Where to Stay in Bucharest

You will find accommodation for every budget and travel style in Bucharest. Opt to stay in the Old Town (Centru Vechi) or Unirii Square if you want to be in the beating heart of the action.

Piata Romana and Cismigiu are peaceful residential neighbourhoods. You may wish to consider staying here if you want to experience Bucharest “like a local”. A selection of excellent Bucharest hotels is provided below.

Sinaia is a picturesque mountain town that is situated in Central Romania’s Bucegi Mountains. The town is a popular vacation spot among Romanians on account of its stunning mountain scenery and nearby ski resort.

Peleș Castle is arguably Siniaia’s most iconic attraction. This ornate structure was constructed in 1873. It was built in Neo-Renaissance style.

The Romanian King Carol I funded the castle’s creation and used the site as his summer residence. The interiors are every bit as grand as the exteriors. You will find colorful stained glass windows, decadent furnishings, Murano crystal chandeliers, and fine art pieces inside Peleș Castle.

Where to Stay in Siniaia

You may wish to consider the below hotels for your time in Sinaia.

The medieval town of Brasov is perhaps one of the most beautiful places in all of Romania. Meandering through Brasov’s winding, labyrinth-like streets is enjoyable in itself. However, Brasov also makes a great base for exploring the wider Transylvania region.

Bran Castle is a highlight of any Romania itinerary. This eerie, looming structure can be reached within just a 30-minute bus journey from downtown Brasov.

The castle served as inspiration for Bram Stoker’s Dracula novels. It was here where Vlad the Impaler was supposedly once imprisoned.

Where to Stay in Brasov

Base yourself in Brasov when you explore Brasov, Râșnov, and Bran. The below hotels come highly recommended.

Sibiu is an old Saxon city that exudes elegance at every turn. Once upon a time, the city was occupied by Nobles and was an enviable address in Romania.

Today, the prestige and perks of living in Sibiu still remain. The city appears time and again on “best cities to live in” polls.

The buildings and churches here still possess an air of glamour. The homes and storefront facades have been built in classic art-nouveau style and the interiors of churches and religious buildings are embossed with gold and lavish furnishings.

The lesser-known Transylvanian towns of Cisnadie and Cisnadioara are gorgeous rural settlements found on the outskirts of Sibiu. The towns are famous for their fortified churches that date back over 800 years.

Where to Stay in Sibiu

There are ample hotels in Sibiu to suit every travel style and taste. The below hotels place you close to the town’s main attractions and ooze personality and charm.

The compact city of Sighișoara sits on the banks of the Târnava Mare River in Transylvania. Sighișoara is famed for being the birthplace of Vlad the Impaler. The UNESCO protected old town dates all the way back to the 1100s.

Sighișoara is characterised by pastel-coloured houses, an intricate network of narrow winding streets, and medieval plazas that are centuries old.

One day is enough to explore Sighișoara. However, you can stick around and explore this beautiful place at a more relaxed pace if your schedule permits.

Where to Stay in Sighisoara

You can find many adorable, family-owned guest houses and B&Bs in Sighisoara. The accommodation options detailed below are well worth considering.

Cluj Napoca is Romania’s “second-city”. Its large student population has paved the way for a plethora of eclectic bars, coffee shops, and restaurants to open here.

The city is often bypassed by most international tourists who use Cluj as a stopgap on their way to other Transylvanian towns. However, Cluj is a wonderful place for an alternative European city break.

Where to Stay in Cluj Napoca

Despite being Romania’s second-largest city, Cluj Napoca exudes a cosy “small town” vibe. Try to base yourself in the city centre so that the city’s nightlife, coffee shops, and historic attractions are right on your doorstep.

There are dozens of other beautiful places that you should take the time to incorporate into your Romania itinerary if you are not on a tight schedule.

The Danube Delta is one of Romania’s natural UNESCO protected sites. The Delta is situated in Tulcea County in Eastern Romania. It is possible to venture here from Bucharest before continuing north to Transylvania.

The region has the third-largest biodiversity in the world – third only to the Galapagos islands and the Great Barrier Reef. More than 5,500 species of flora and fauna, and 300 bird species call this area home.

Valea Calugareasca is one of Romania’s premier wine-tasting regions. Some of the wineries here date back to the 18th century. It is possible to organise an independent wine tasting, or join one of the many day tours that venture here from Bucharest.

Bucovina sits on the northeastern border between Romania and Ukraine. This UNESCO-protected region is famed for its painted monasteries. Many of the monasteries and churches here have been built in obscure shapes and styles.

The frescoes of Bucovina’s churches and monasteries are remarkably well-preserved. They can be found scattered throughout the villages of Moldovita, Arbore, Probota, Patrauti, Sucevita, and Voronet.

Stunning churches and monasteries are one of the main things that Romania is known for. There is truly no better place to observe them at their best than in Bucovina.

This region is also famed for its handicrafts and traditional artisan products. Consequently, Bucovina is a wonderful place to pick up gifts and souvenirs such as ceramics, painted eggs, wood carvings, and woven goods.

Stay the Night in Iaşi City

The city of  Iaşi is about as off-the-beaten-path as you can get in Romania. This eastern city is bursting with history. Indeed, Iasi is often referred to as being the country’s historical capital.

The Palace of Culture sits in Iaşi’s centre. Construction on this sprawling 300 room palace started in 1901 and was completed in 1925. It’s possible to tour this building which is widely-regarded as being the most important historical site in Eastern Romania.

Romania is a relatively large country. However, it is easy to cover a lot of ground in a week or two. Some alternative sample Romania itineraries are provided below.

This 7 day Transylvania itinerary is a nice way to explore Romania’s highlights if you are short on time. Embark on a “whistle stop” tour of Bucharest before continuing on to the towns of Siniaia, Brasov, Sighișoara, et al.

If you have between 14 and 21 days to spend in Romania, you may want to consider this all-encompassing Romania itinerary which allows you to reach all corners of this beautiful country.

Romania has an excellent, comprehensive public transport network. It is easy to get from A to B on your Romania itinerary whether you decide to rent a car or get around by bus/rail.

Renting a Car in Romania

Renting a car in Romania is not as daunting as it may sound. This gives you a little more freedom and flexibility than if you rely on public transport. Many international rental companies operate in Romania. Avis, Sixt, Europcar, and Flex all offer rentals here.

You should expect to pay between $10 and $19 a day to rent a car in Romania. The exact precise depends on the season and the specific model of the car.

Driving in Romania during your Romania itinerary is no different to renting a car in most other European countries. The scenery is beautiful, and the roads are very well-built.

Trains in Romania are clean and comfortable. Services run regularly between large towns, cities and tourist hubs. This entire Romania itinerary can be completed by train.

CFR (Căile Ferate Române) are the Romanian domestic rail company. You can check their prices and schedules here.

You can generally purchase tickets from the train station ticket office on your intended day of travel. Tickets are also available online.

Several bus companies operate in Romania. They run between large towns and cities. You can also find frequent services to the nearby countries of Hungary, Bulgaria, and Serbia.

Flixbus is an excellent long-distance operator. However, it is predominantly smaller, independent operators that run between small towns and villages.

Most Romanian bus operators are clean, safe, and well-organised. You can check routes, scheduling, and ticketing information on the Autogari Romania website here.

Do you have any additional questions about planning a Romania itinerary? I spent a month travelling through this beautiful country and would be happy to answer any questions that you may have. Please don’t hesitate to reach out to me via the comments below. Safe travels! Melissa xo