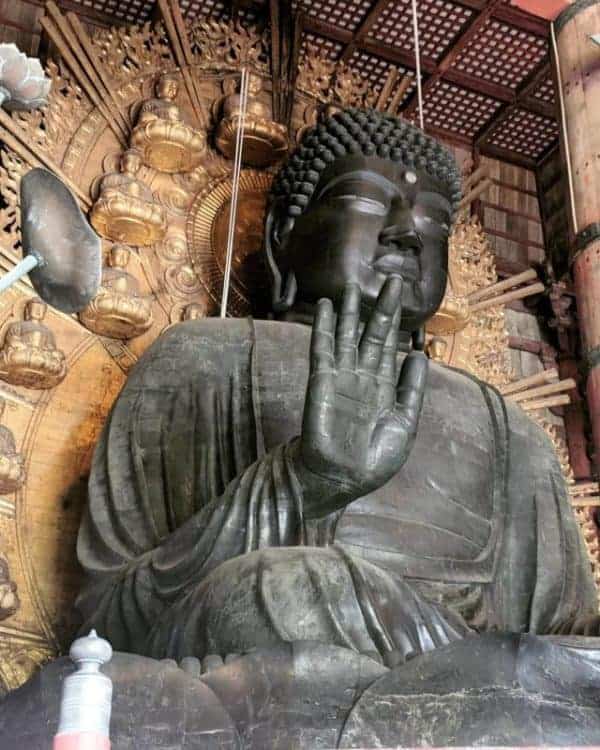 Reflecting back on my 2015 solo cross-country trip through Japan, I realised that I never really gave the country and the various stopping points that I visited the write-up that they deserved and so, I am doing so now with this Nara itinerary.

Situated in Japan’s Kansai region, Nara is an old, historic city that served as the country’s capital from 710 CE to 784 CE, a time in Japanese history known as the Nara period. It is home to some of the most important UNESCO World Heritage shrines, temples, and monuments of Japan.

If you are a big history buff, you absolutely must set aside a couple of days of your trip for some Nara sightseeing as part of this dedicated Nara itinerary. This Nara itinerary explores some of the most highly recommended activities to do and places to visit in Nara. Nara also fits well into a wider Japan itinerary.

Day One: Enjoy the Highlights of Nara

Completed in 669, Kofukuji is a Buddhist temple that is among the eight Historic Monuments of Ancient Nara. The tutelary temple of the Fujiwara clan, a powerful political family back in the Nara period and Heian period, it sits on a vast complex that consists of the Eastern Golden Hall, the Central Golden Hall, the North Octagonal Hall, the South Octagonal Hall, a five-storied pagoda, a three-storied pagoda, and a bath house. It houses valuable National Treasures, including the statues of The Devas of the Eight Classes and the Thousand-armed Kannon. You can get there by walking about five minutes from Kintetsu Nara Station or 20 minutes from JR Nara Station, or take a bus and get off at the Kencho-mae stop.

Established in the Meiji period, Isuien Garden is a Japanese-style garden just a 10-minute walk away from Kofukuji Temple. It is made up of two smaller gardens where you can enjoy a leisurely walk through its thriving flora, and around the central ponds that have small islands with different animal sculptures. It also has traditional tea houses, and a museum that boasts a wide collection of ancient Chinese and Korean pottery, and other artifacts.

One of the most renowned Buddhist temples in Japan, the Todaiji Temple is an 8th century wonder whose main hall, known as the Big Buddha Hall or Daibutsuden, is the largest wooden building in the world. A 15-meter tall bronze statue of a seated Vairocana Buddha can be found there, surrounded by several smaller Buddha statues. Its temple grounds are large and spacious, and offer nice walking trails to access the other halls and temples nearby. From Isuien Garden, it is about 10 minutes away on foot.

One of the Historic Monuments of Ancient Nara, the Kasuga Taisha is a Shinto shrine founded in 768. It was the designated family shrine of the Fujiwara clan back in the Nara period and Heian period, and is popular for the hundreds of bronze lanterns that hang from its halls and buildings, and stone lanterns that line its pathways. To get there from Isuien Garden, walk about 20 minutes through a forested trail.

Established in the 14th century, Nara Park is a large, public park situated in the heart of Nara. It is home to more than 1,000 deer that roam free around the park. You can feed these sociable animals with deer crackers that you can buy from the stalls there. However, be warned that some can get too aggressive and would even bite. From Kasuga Taisha, the park is only 15 minutes away on foot. Since most people associate a visit to Nara with the deer’s that roam freely around the region, this is no doubt one of the highlights of any Nara itinerary. The deer park is free to enter, and is a great example of a Japan experience that won’t break the bank.

Outside of central Nara, there are a couple more ancient temples that you can include to your Nara itinerary, and visit on your second day in the city.

One of the oldest temples in Japan, it was completed in 607 and is home to the oldest surviving wooden structures in the world that date back to the 6th and 7th centuries.

Founded by Emperor Temmu in the 7th century, it features a symmetrical layout that consists of two three-story pagodas and two main halls.

A UNESCO Heritage ancient monument founded by a Chinese monk in 759, it is composed of numerous buildings that are designated National Treasures and Important Cultural Properties of Japan.

The official residence of the Japanese Imperial Family during the Nara period, Heijo Palace is a UNESCO World Heritage Site known for its East Palace Garden, Suzaku Gate, Former Audience Hall, and many other buildings that were used as government offices over a thousand years ago. It is about a 15-minute walk from Yamato-Saidaiji Station, and is also accessible by bus.

Where to Stay in Nara


Though Japan is generally considered as an expensive travel destination, budget travellers will be pleased with the number of low cost options available in Nara, with hostel beds available from just 3,000 yen per night. Guest House Oku and Hiloki Hostel Nara offer comfortable beds in dormitory rooms, free Wi-Fi, shared toilets and baths, a wide range of other facilities and amenities, and convenient access to the must-see spots.

On the other hand, those with a more flexible budget can look into booking a room at the Onyado Nono Nara or the Nara Visitor Center and Inn, both of which have Western-style and Japanese-style private rooms equipped with en suite bathrooms and a variety of other facilities and amenities, from around 4,000 yen to 9,000 yen a night.

How to Get to Nara

The JR Yamatoji rapid train and the JR Miyakoji rapid train link Nara to Osaka and Kyoto to Nara, respectively. A one-way journey takes about 45 minutes, and costs 700 to 800 yen.

There are overnight bus services that run between Nara and Tokyo that take approximately eight hours and cost from 4,000 yen per one-way trip.

What to Eat in Nara

Dabbling in authentic Japanese cuisine is a big part of immersing yourself in the local culture while travelling in Japan. For a more memorable Nara travel experience, make sure to try the following local cuisines on your stay:

Manju – Introduced to Nara by the Chinese in the 14th century, this is a type of steamed bun stuffed with sweet bean paste.

Narazuke – For more than a millennium, this has been a staple side dish for different kinds of meals prepared by the locals, made by pickling cucumber, daikon radish, uri gourd, and other vegetables with sake.

Somen – This can be enjoyed either hot, which is served with soup called nyumen, or cold, where the noodles are dipped into dashi soy sauce before eating.

Are you headed to Nara or have any questions about this Nara itinerary? Feel free to reach out to me via the comments below.

Disclaimer: This Nara itinerary may contain affiliate links. That means that if you choose to make a purchase through one of the links on this page, I will receive a small amount of commission at no additional cost to you. This aids me in the running of this site. Thanks for your consideration.